Background: Endocuff has been suggested as a safe and useful device facilitating complex endoscopic mucosal resection (EMR) in the sigmoid colon; however, the existing data are sparse. In this case series, we report our experience with endocuff in facilitating EMR in defiant polyps throughout the colon.

Case series: In colonoscopies where sufficient stability and, thus, reliable visualization of the lesion was not possible (defiant polyp), the endoscope was removed, and subsequently, an ENDOCUFF VISIONTM was mounted on its tip. Thereafter, the colonic area of interest underwent endoscopic re-examination. The study prospectively included fifteen patients with 16 sessile/flat polyps. Fifteen of the 16 EMRs were considered successful.

Conclusions: This case series indicates the use of endocuff as an auxiliary device for facilitating EMR in defiant colonic polyps. HIPPOKRATIA 2021, 25 (3):134-137.

Endocuff-assisted colonoscopy has been shown to facilitate adenoma detection during colonoscopies1-4. To date, however, data remains limited regarding the safety and usefulness of the endocuff in complex endoscopic mucosal resection (EMR) in the sigmoid colon via the retraction of colonic folds and stabilization of the tip of the colonoscope.5 Buchner et al6 defined defiant polyps as those fulfilling “any one of the following features: lesion’s size greater than 20 mm, unfavorable location obscured over or behind the folds, and sessile and flat morphology; with all those features posing a challenge for complete endoscopic resection with standard polypectomy techniques”. It may very well be the case that endocuff can be used as an auxiliary device to remove defiant polyps in the colon. However, there is no available data regarding its efficacy and safety in large flat/sessile polyps to the full extent of the large bowel, particularly in the right colon. In this case series, we report our experience with endocuff in facilitating EMR in defiant polyps throughout the colon.

In cases fulfilling the criteria of defiant polyps as described by Buchner et al6, we advocate that the use of endocuff might facilitate the EMR by retracting the folds. Additionally, we believe the device would facilitate the clear visualization of the resection-site margins. The completeness of EMR and the visualization of the resection-site margins were the primary outcomes of this case series.

Initially, we performed in all cases a conventional colonoscopy. In those cases where stability and adequate polyp visualization were not possible, we withdraw the colonoscope and mounted on its tip an ENDOCUFF VISIONTM (Olympus Medical, Tokyo, Japan). After that, we re-inserted the mounted colonoscope in the area of interest in the colon. Should the resection margins and entire submucosal base be clearly visible with no tissue residue, the EMR was considered successful. We recorded the size, location, and histological evaluation of the retrieved polyps and relevant complications after each EMR. We measured the polyp size by visual comparison using predetermined width open biopsy forceps.

The difficulty encountered during EMR was graded according to the Size, Morphology, Site, and Access (SMSA) scoring system (Table 1)7. The SMSA levels are graded from I to IV (SMSA I =4-5 points, SMSA II =6-8 points, SMSA III =9-12 points, SMSA IV >12 points).

Monopolar coagulation current, using an ERBE ICC 200 generator (Tübingen, Germany) with a setting of 120W in the “endocut” function, was used. The mucosal defect was treated using, in all cases, thermal ablation for the entire defect’s margin. We performed thermal ablation with snare tip soft coagulation STSC (SOFT COAG mode, 80W – Effect 4)8. The hospital scientific committee approved the study (Scientific Council of Venizeleio General Hospital, decision No 155/21) and each patient involved had given their informed consent before participating in the study.

Fifteen patients (mean age: 66 ± 10.1 years, six male/nine female) with 16 flat/sessile polyps were prospectively included in the study. In 14 out of the 15 patients, diverticulosis was detected. In all cases, the polyps were considered defiant to standard EMR; hence, endocuff-assisted EMR was immediately performed in all patients. All lesions were considered granular/non-depressed (not indicative of submucosal invasion)9, they met the Narrow-Band Imaging International Colorectal Endoscopic (NICE) classification type 2 criteria10, and they were amenable to the EMR technique. Notably, the lesions had adequately been lifted, and the performance of the EMR in retrovision was unsuccessfully tried to the right colonic polyps prior to mounting the endocuff. The lesions were re-injected in those cases where the rapid dissolution of the lift was faced. Polyps’ characteristics and EMR outcomes are presented in Table 2. Fifteen of the 16 EMRs were considered successful. The completeness of the EMR was reviewed by another experienced colonoscopist, who evaluated photos and videos of the EMR procedure. None of the 15 EMR cases, completely removed by endocuff-assisted EMR, required additional surgical or oncological treatment. An EMR performed for a giant polyp (15 cm) in the rectosigmoid area was terminated due to the excessively lengthy procedure. The patient was further referred for transanal endoscopic microsurgery to remove the residual polyp. The lesion was successfully removed, and the histopathological evaluation revealed an adenoma with high-grade dysplasia.

No difficulties were encountered in advancing the mounted colonoscope with the ENDOCUFF VISION TM to the area of interest in the colon. All resected polyps were neoplastic, and all patients were sedated to conscious sedation11. No patient required hospitalization, and no complications were recorded.

EMR in the colon remains challenging in cases with defiant polyps6,12. Retrospective data have shown an increased risk of incomplete polyp resection for a colonic polyp located across a fold than for a polyp located between folds12. More specifically, an auxiliary device might be useful in those cases with polyps hidden behind or wrapped around a fold. The present case series shows the use of ENDOCUFF VISION TM to remove defiant flat/sessile polyps, with EMR, detected throughout the colon.

Evidently, the definition of a defiant polyp constitutes a challenging issue and is ultimately at the discretion of the colonoscopist. A defiant polyp is a lesion recognized during a colonoscopy that defies resection by the standard technique of snare polypectomy6. A retrospective study has previously shown that most defiant polyps can be successfully eradicated at rescheduled therapeutic colonoscopy using adjunctive resection and ablation techniques with a high R0 rate6. However, completing EMR via the same procedure using a simple assisting device would be of paramount importance.

Aiming to address the issue of EMR difficulty, this case series used the SMSA score developed by a working group of United Kingdom experts. It constitutes a straightforward clinical score that determines a patient subgroup at an increased risk of adverse events, failed EMR, and adenoma recurrence at surveillance7. The SMSA score has successfully been validated in a retrospective study, including 2,675 polyps removed by EMR13. Validation of this score in a prospective study including 220 lesions ≥20mm in size demonstrated lower clearance rates (87.5 % vs 97.5 %; p =0.009) and higher complication rates (8.6 % vs 0 %; p =0.007) for SMSA level IV polyps as compared to SMSA level II, and III14. In the present study, all included polyps had a high SMSA score (III or IV), reflecting, in most cases, the large size, the location in the right colon, and the difficult access to the polyp. Indeed, these factors led the endoscopist to decide to immediately repeat the colonoscopy with the endocuff mounted to the colonoscope.

In randomized trials, endocuff use has been associated with a lower adenoma miss rate compared to standard colonoscopy and also with the reduction of the polypectomy duration1,15. The CARE study16 has clearly shown that greater focus should be placed on evaluating the edges of the resection site for residual neoplastic tissue; therefore, efforts along this line are rational.  Thermal ablation, with the snare tip, was applied in all post-EMR mucosal defect margins, as it has been shown to reduce the adenoma recurrence8

In this case series, we noticed an improvement in the access to defiant polyps located in both the left and right colon by flattening the colonic folds, thus decisively facilitating the EMR procedure compared to procedures without endocuff (Figure 1). The colonoscope is more stable with the endocuff mounted on its tip during withdrawal. Furthermore, the endocuff definitely facilitated the clear vision of the edges of the resection site behind the colonic folds (Figure 2). We feel compelled to share our clinically based assumption that endocuff-assisted EMR is useful in flexures such as the hepatic, the rectosigmoid junction, and the ileocecal valve. 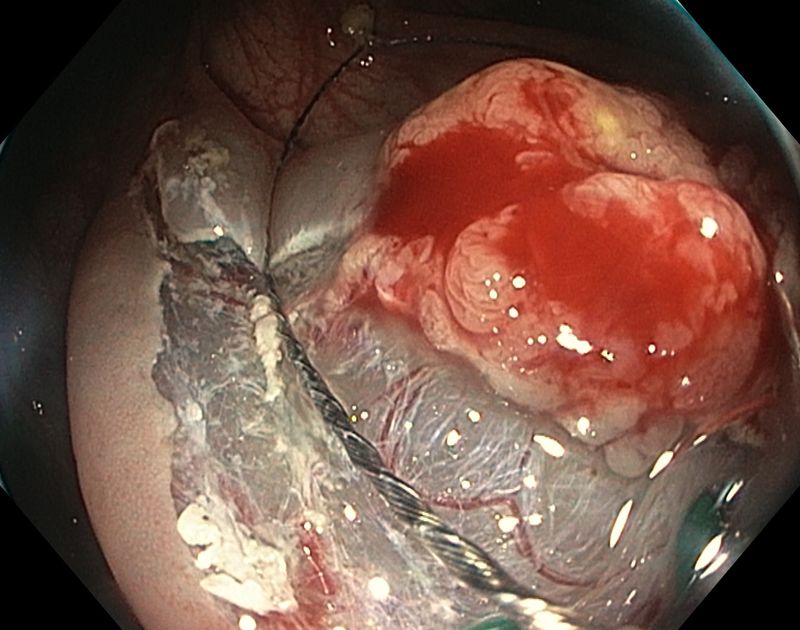 Figure 1: ENDOCUFF VISION TM facilitating the inspection and the snaring of polyp tissue by stabilizing the tip of the colonoscope effectively. The projections of the endocuff are safely placed in the submucosal layer. 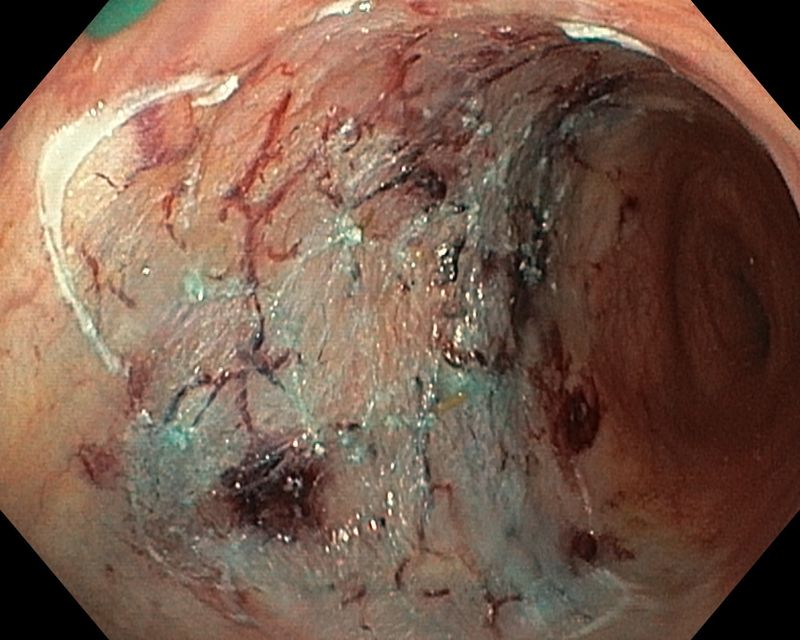 Figure 2: ENDOCUFF VISION TM facilitating the inspection of the entire margin of the mucosal defect by stabilizing the tip of the colonoscope effectively.

A recent randomized controlled trial has shown that endocuff application offers increased detection of adenomas in the left colon, where the colonic folds are most prominent1. However, although the right colon is straighter with fewer folds, excessive angulations or looping of the colonoscope may occur, reducing the mucosal visualization and the stability of the colonoscope. This is more often the case in areas around the hepatic flexure or in the cecum; therefore, the endocuff-assisted EMR might be a valuable alternative tool.

This case series has certain limitations. Firstly, it is a single-center series. Secondly, the recurrence rate of the EMR cases was not evaluated, as this estimation was considered beyond this series’ purposes. Thirdly, biopsy specimens were not obtained from the EMR margins to evaluate the completeness of resection. Apparently, we do accept that although we did not face such an issue, the endocuff might hamper the maneuverability of the colonoscope, thereby making resection even more difficult. The endoscopist should be aware of it. However, based on our knowledge, this is the first case series describing the use of endocuff for the facilitation of endoscopic mucosal resection in defiant colonic polyps in all colonic segments.

In conclusion, our data indicate the use of endocuff for facilitating EMR in defiant colonic polyps, particularly in cases where stable access is not achieved. Our preliminary data may encourage the design of more extensive studies on this issue.