Background: Neuroendocrine neoplasm (NEN) of the cystic duct (CD) is an extremely rare entity, with misty clinical manifestation and incidental, in most cases, diagnosis. Due to its rarity, several dilemmas arise concerning the optimal treatment of this type of malignancy.

Case description: We report two cases of histologically confirmed NENs of the CD from our institution. Furthermore, we present a literature review focusing on the treatment type and likelihood of recurrence. The two patients underwent laparoscopic cholecystectomy (CCE) due to cholelithiasis and were both diagnosed with well-differentiated Grade 1 (G1) NEN. The first patient did not undergo further treatment as the surgical margins were clear. Regarding the second patient, complementary resection of the CD remnant was performed since the histopathological diagnosis indicated positive surgical margins. Active postoperative surveillance was suggested, and both patients remain disease-free to date.

In the literature, we identified 22 previous cases of NENs of CD. Since there are still no standard guidelines, various surgical plans were adopted, varying from simple CCE to hepatic lobectomy and Roux en Y hepaticojejunostomy. Postoperative surveillance is reported for up to four years. Regardless of the implicated treatment plan, no patient was diagnosed with recurrent malignancy and the mortality rate was very low (1/22).

Conclusion: We propose that cholecystectomy with ligation of the CD proximal to its junction with the common hepatic duct is an adequate oncological treatment for G1 NENs of the CD. When preoperative or perioperative suspicion for malignancy is made, a frozen section of the CD should be sent for pathological examination to confirm radical resection (R0). Nevertheless, there is a need for further research that could validate our findings. HIPPOKRATIA 2021, 25 (3):141-144.

Neoplasms of the extrahepatic biliary tract (EBT) rarely occur, with a cumulative incidence of 2-3.6 % among all gastrointestinal tumors1. More precisely, primary cystic duct (CD) tumors account for less than 17 % of all EBT neoplasms, with adenocarcinoma being the most common type2. Neuroendocrine neoplasms (NENs) arise from the Kulchitcky cells, embryonal neural crest cells that normally migrate to the respiratory and gastrointestinal tract during fetal development. NENs can occur in any part of the gastrointestinal tract, with EBT localization being diagnosed in only 0.67 % of all gastroenteropancreatic NENs3. To our knowledge, only 22 cases of CD NENs have been reported, indicating that treatment is yet to be standardized. Thus, this review aims to summarize previous knowledge concerning the optimal treatment plan for CD NENs and report our institution’s experience on this debatable subject.

The final histopathological report revealed chronic cholecystitis alterations, a lymph node without notable findings, and an incidental finding of a neoplasm situated in the cystic duct measured 20 mm, excised in healthy margins. Further immunohistochemistry workup revealed the neoplasm’s neuroendocrine origin. Being a well-differentiated tumor with a slow mitotic rate and Ki-67 index below 3 %, we categorized it as a Grade 1 (G1) neuroendocrine tumor4. Based on those findings, a six-month-interval surveillance plan was made. Abdominal computed tomography (CT) 24 months postoperatively reveals no signs of recurrence.

A 74-year-old Caucasian male presented to the clinic’s outpatient department after a sudden onset of afebrile RUQ pain. His medical history included diabetes mellitus and arterial hypertension, with no previous surgical history. Clinical examination revealed tenderness in the RUQ of his abdomen (positive Murphy sign). With the exception of his direct bilirubin being slightly higher than the normal values (0.40 mg/dL), his complete blood count and the rest of the biochemical tests were within normal limits. The abdominal US revealed cholelithiasis and gallbladder wall thickening without other significant findings. Eventually, the patient underwent laparoscopic cholecystectomy, with an uneventful recovery.

The histopathological report revealed chronic cholecystitis alterations and a neoplasm situated precisely on the specimen boundaries, measuring 9 mm and obstructing the cystic duct. Immunohistochemistry tested positive for chromogranin and cytokeratin (AE1/AE3), Ki-67 index was below 1 %, revealing its neuroendocrine origin (Figure 1). According to the 2019 World Health Organization (WHO) classification (5th edition)4, the neoplasm was also categorized as a G1 neuroendocrine tumor. 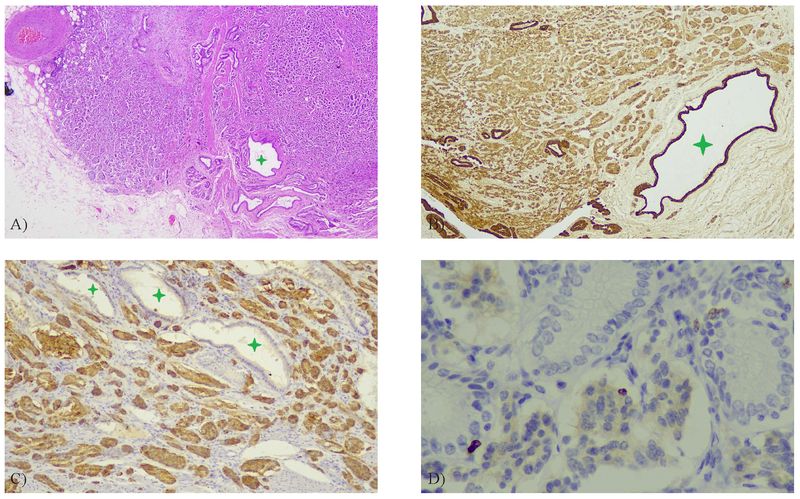 A second operation was inevitable due to the incomplete neoplasm resection (R1). The operation involved a laparoscopic resection of the CD remnant and its intraoperative histopathological examination. The patient was discharged one day postoperatively. The final histopathological report showed no evidence of neoplasm beyond the surgical boundaries (R0).

Written informed consent was obtained from both patients for the publication of this case report and accompanying images.

As previously mentioned, NENs of the CD are extremely rare pathological entities since only 22 cases have been reported as primary localization in the cystic duct. This rarity could be explained by the origin of NENs, meaning Kulchitsky cells, typically sparse in the EBT5.

Table 1 summarizes the data collected from the 24 patients diagnosed with CD NENs, including our two new cases. Most of them (17/24; 71 %) were females, while the mean age at the time of diagnosis was 52 years. Pathology revealed metastatic infiltration of the cystic duct lymph nodes in 16.7 % (4/24) of the patients6–9, while preoperative abdominal CT showed hepatic metastasis in one patient10.

Information concerning the WHO classification of these neoplasms was present in eight cases. From these cases, seven patients were diagnosed with G1 malignancy and one with Grade 3. The follow-up period varied across studies from six to 49 months. Regardless of the operation performed, almost all patients (23/24) showed no evidence of disease during follow-up, except for one male patient, who succumbed six months postoperatively due to hepatic metastases.

Due to their indolent nature and atypical clinical, laboratory, and radiological findings, the diagnosis of NENs remains vague. They usually appear as incidental findings11. This assumption could be validated by the fact that 33.3 % (8/24) of the patients, who were previously diagnosed with cholelithiasis, were readmitted to the hospital for further neoplasm treatment. Notably, fewer amputating operations offered similar results in terms of survival and recurrence compared to extensive operations, and a structured follow-up program with abdominal CT can be considered adequate.

CD NENs still create great diagnostic and therapeutic dilemmas. Based on our experience, we propose that cholecystectomy with ligation of the CD proximal to its junction with the common hepatic duct is oncologically adequate for G1 NENs. When preoperative or perioperative suspicion for malignancy is feasible, a frozen section of the CD should be sent for histopathological examination to confirm R0 resection. Nevertheless, there is a need for further research that could validate our findings.