Background: Our understanding of the pathophysiology and management of intracranial aneurysms (IAs) continuously advances. This case-control study analyzed the demographics of patients with IAs and the morphological Digital Subtraction Angiography (DSA) characteristics of ruptured and unruptured IAs.

Results: One hundred and three patients with ruptured and eighty-six patients with unruptured IAs were studied. Anterior communicating and internal carotid artery IAs were the dominant locations: 42.7 % and 23.3 % in ruptured and 29 % and 41.9 % in unruptured IAs, respectively. The female-to-male ratio was 1.78 in ruptured and 2.44 in unruptured IAs (p =0.317), while the rupture was more frequent in younger patients (p =0.034). Angiographically, smaller diameter (p =0.01), abnormal morphology (p =0.0001), and co-existence of CWV (p =0.016) were reported in ruptured IAs. Location at bifurcation/trifurcation (p =0.487) and the co-existence of additional or mirror IA did not differ significantly (p =0.879).

Conclusions: On DSA, ruptured and unruptured IAs differed in size, morphology, and co-existence of CWV; findings that may favor the treatment of specific unruptured IAs. However, a higher level of evidence is needed to include all these factors in the treatment decision process, provide patient-oriented treatment and reliably identify unruptured IAs at greater risk. HIPPOKRATIA 2021, 25 (3):100-107.

Ruptured intracranial aneurysms (IAs) are frequently associated with high morbidity and mortality among survivors1-3. Furthermore, the incidence of IA-related subarachnoid hemorrhage (SAH) in Europe in 2010 was 6.3 per 100.000 person-years [95 % Confidence interval (CI), 4.9-8.1]4.

This prospective study included adult patients with ruptured or unruptured saccular IAs treated with endovascular coiling at the Department of Neurosurgery and Neuroendovascular Surgery of the 401 Army General Hospital in Athens from 01/01/2015 until 31/12/2017. During their hospitalization, patients received the standards of care according to institutionally approved protocols, and data were prospectively and consecutively recorded in accordance with the 1964 declaration of Helsinki and its later amendments. Approval was obtained from the Institutional Research and Scientific Ethics Committee regarding data analysis and usage. The STROBE case-control checklist7 was applied. Patients’ demographics, radiological and morphological IAs characteristics were analyzed: gender, age, aneurysmal side, aneurysmal location and diameter, preoperative angiographic image, arterial variations, mirror, and co-existence of additional IAs. We used the Rstudio’s8 statistical tests and methods for each group’s statistical analysis and comparison of the collected information.

Patient sample consisted of two independent groups: Group A included patients presenting with IA rupture, whereas Group B included patients with unruptured IAs (both symptomatic and asymptomatic). In both groups, patients were referred to our unit to undergo evaluation and optimization for coiling embolization. For maximum accuracy in diagnosis and evaluation, the target aneurysm was spotted using DSA: i) blood distribution in SAH, ii) the largest IA, and iii) abnormal IA sack in cases of unidentified SAH.

Both groups underwent computed tomography and/or magnetic resonance angiography before DSA. The coiling procedure was performed by releasing into the aneurysmal sack platinum micro-coils until its’ complete occlusion and exclusion from the circulation. During the procedure, the whole cerebral vasculature was investigated for additional findings (aneurysms and/or arterial malformations).

Aneurysm morphology was characterized as regular (spherical, ellipse) or irregular (pseudolobes/additional lobes, protrusions, blebs)10. Aneurysmal maximum diameter was measured during DSA on a one-mm scale. The risk of rupture for every one mm of IA sack growth was estimated using regression analysis. Arterial anomalies such as circle of Willis variations (CWV), hypoplasia/aplasia or previously undetected IAs were also recorded. We characterized as hypoplastic an artery where contrast could barely pass along, whereas as aplastic where no contrast could pass distally11.

Statistical tests were performed using the Rstudio8. For qualitative variables, frequencies and percentages (%) were used. Normal distribution was assessed with the Kolmogorov-Smirnov and Shapiro-Wilk tests. For quantitative variables, discrete numbers with percentages (%), mean, range, and standard deviation (± after mean values) were used. Two-sample t-test and Mann-Whitney U test were used for independent variables based on the normality of distribution. Chi-square and Fisher tests were used for categorical variables. In order to investigate the correlation between the risks of aneurysm rupture for every one mm growth of its sack, we used regression analysis. Specifically, a logistic regression model with a continuous explanatory variable for aneurysmal diameter was also applied to calculate the odds of rupture. The p-value (p) threshold of statistical significance was set at 0.05. CIs were calculated at a 95 % level and were rounded to two digits.

One hundred eighty-nine patients were identified; one hundred and three with ruptured and 86 with unruptured IAs (Table 1). The mean age was 55.7 ± 11.1 (range: 29-83) years (p =0.034). No association between rupture and gender was found (p =0.317). No aneurysm was ruptured during the coiling procedure, and normal and unobstructed blood flow of the parent vessel was preserved in all patients.

The group of ruptured IAs included 103 patients. The characteristics of the aneurysms’ parent artery and specific location are presented in Table 1 and Figure 1. The female-to-male ratio was 1.78. Internal carotid artery (ICA) aneurysms had a larger mean diameter (6.92 ± 4.17 mm), while aCOM aneurysms had the smallest diameter (5.02 ± 2.55 mm) (Figure 2). The smallest diameter was 2.4 mm (supraclinoid segment of ICA), while the largest was 21 mm (ΙCA bifurcation). In multivariate regression analysis, only size predisposed to rupture. Specifically, the odds of aneurysmal rupture increased by 18.8 % per one mm of aneurysmal diameter increase (p =0.0006, 95 % CI: 1.08, 1.32). 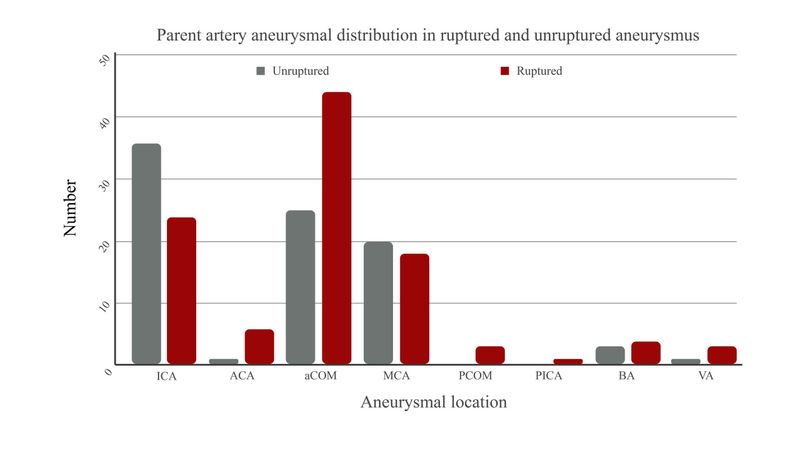 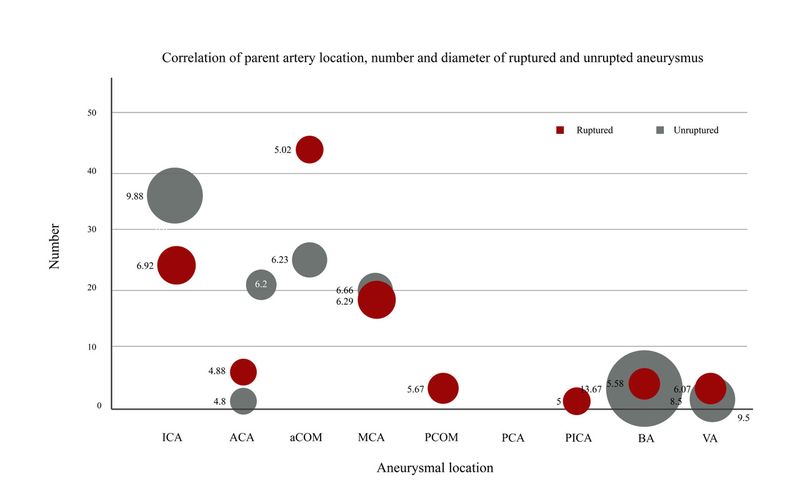 No association between gender and aneurysm rupture was found (p =0.317). In conjunction with the literature, there was a clear female dominance; the gender ratio can reach 3:1 and, in the present study, was approximately 2:1 (p =0,317)1,5,6,13–15. Neither PHASES nor UIATS trials included gender as a factor favoring treatment2,3,14. Accepting the theory that aneurysms probably grow with aging, the finding that ruptured IAs were found in younger patients (p =0.034) suggests that specific factors act synergically towards rupture earlier in some occasions6,12–17. Similarly to the earlier published series, aCOM was the commonest aneurysm location, with ICA being the second most common. Additionally, aCOM was associated with rupture with almost double frequency compared to unruptured aneurysms. On the contrary, unruptured ICA aneurysms represented the most frequent location in this cohort of patients. Moreover, although less frequent, almost all posterior circulation IAs were ruptured, implying that these aneurysms are also of increased risk, which is also in concurrence with both UIATS and PHASES scores1–3,6,18,19. Additional or mirror IAs, although found in a considerable portion of patients, were not associated with rupture (p =0.879)1,12,14.

According to the current cohort, aneurysms with smaller diameters constituted the majority of the ruptured IAs, which differs from the UIATS and PHASES classification2,3. We support the notion that some aneurysms will rupture early, so they need to be identified9,13,20. In our study, the mean diameter differed between the two groups, with ruptured IAs having a smaller mean diameter (p =0.001)1,3,6,13,19. Furthermore, correlating rupture with the diameter revealed that the odds increased by 18.8 % per one mm of saccular growth. According to the literature, unruptured IAs even <7 mm may warrant treatment1,9,12,13,15,20,21. In our cohort, aneurysms <7 mm represented 68.3 % of the total and nearly 80 % of the ruptured IAs. More IAs ruptured (62 %) and had significantly smaller diameters (p =0.002). As smaller ruptured IAs constituted the majority of our sample, it is supported that specific unruptured IAs with smaller diameters may necessitate treatment13. Juvela et al set a 7 mm threshold stating that IAs can rupture regardless of their size21. However, both PHASES score and UIATS assess IAs <7 mm in diameter as lower risk2,3. Specifically, the PHASES trial also provides points for location, including aCOM artery and posterior circulation, as carrying a high risk for rupture. This compensates for the lack of a lower limit in aneurysm sac diameter in these anatomical locations, which is otherwise reduced to 4 mm. These findings suggest that although patient age and IA diameter are significant, a combined estimation of multiple risk factors (including location) may be needed to identify these high-risk aneurysms.

Morphological measurements describing an abnormal/non-spherical dome (additional lobes, pseudolobes, abnormal shape) seem to take a major place in the treatment of unruptured IAs1,2,13,15,17,19,21,22. Evidence support that abnormal shape was the only factor independently associated with rupture as in our study (p =0.0001)1,10. A non-smooth wall was over five times more frequent in ruptured IAs, indicating that focal wall distension and weakening lead to rupture. Additionally, non-saccular IAs have been associated with higher growth rates6. Our findings are in total agreement with the aforementioned and with Abboud et al, who stated that compared to the PHASES score, the UIATS offers a more comprehensive approach for rupture risk assessment, where treatment of irregular shape IAs is favored2,3,22. Thus, IAs found to have abnormal sacks may have a direct indication for treatment regardless of the patient’s past medical history or aneurysmal size and location9,17,20.

Despite the consistency in these known risk factors, limited research exists on CWVs. There is evidence that CWVs likely play a role in the formation and progress of IAs. Hemodynamic alterations leading to IAs formation can be implicated11,16,23. The existence of a variation, e.g., A1 aplasia or hypoplasia implies asymmetrical inflow to the rest of brain vasculature: blood volume redistribution through arteries with specific diameter leads to hemodynamic stress1,11,16. In the current study, 40.2 % of patients harbored CWV, with the majority in ruptured IAs group11,16,23,24. No specific CWV was associated with IAs rupture. 36.2 % of aCOM IAs co-existed with A1 variations, and 36.7 % of ruptured aCOM IAs co-existed with A1 variations. Rinaldo et al suggested that A1 hypoplasia can affect the IA formation, size, shape, and rupture irrespective of co-existing known risk factors16. However, neither the PHASES score nor UIATS include CWV in the treatment decision-making process, which may need reassessment given the supporting evidence connecting them with IAs rupture2,12.

Due to underlying difficulties, literature is limited on the direct comparison between ruptured and unruptured IAs. Despite our relatively small sample, the current findings parallel the literature. The study methodology followed a two-step concept: safe conclusions were drawn once our results concurred with the literature. The current study highlights valuable information which may be directly connected with aneurysmal rupture (abnormal morphology and CWV).

Bearing in mind that our study is a single-center study, some limitations exist. Included patients come from a large region, but eligible cases may have been missed. We used DSA, which can harbor a standard error, and analyzed specific morphological measurements. Presenting symptoms, medical history, medication, and risk factors such as smoking or hypertension were not included2,3. Patients treated with flow diverters and clipped aneurysms were not included in the study, depriving these data of our analysis. Moreover, given the sample size, there were no matched groups on location and IA characteristics. In our department, patients referred from >15 hospitals from a large surrounding region are screened and treated. Our unit is one of the three National Public Hospitals located in the region where there is availability for endovascular treatment of IAs. Therefore, most patients with clipped aneurysms do not reach our unit. Valuable information can be extracted on the long-term effectiveness of surgically clipped IAs matched with coiled IAs, but this analysis was beyond the scope of the present study.

Neurosurgeons and neurointeventionists have to make important decisions on managing incidentally-found unruptured IAs. Given the high morbidity and mortality of SAH, identifying unruptured IAs needing treatment is crucial. Certain morphological characteristics were observed in DSA, mainly in ruptured IAs. Thus, a more comprehensive individualized approach and assessment of the DSA findings, such as the presence of CWV, may contribute to identifying high-risk IAs and guide treatment optimization of unruptured aneurysms. This finding that smaller aneurysms constituted most of the ruptured IAs needs further validation in the Greek population.

Authors declare no conflicts of interest. This research did not receive any specific grant from funding agencies in the public, commercial, or not-for-profit sectors.

The study constitutes the first author’s Master of Science Thesis in Medical Research Methodology titled “Comparison of the characteristics and outcome following endovascular management of ruptured and unruptured intracranial aneurysms. A case-control study”, at the School of Medicine, Faculty of Health Sciences, Aristotle University of Thessaloniki, and as such the full text was deposited and is freely available through the Institutional Repository (https://ikee.lib.auth.gr/). A Certificate (No 137/22), issued by the MSc Medical Research Methodology program, declares that this is not considered published work and the author reserves the right to submit this study for peer review and publication.