Background: Diffuse cystic lung diseases are a group of heterogeneous pathophysiological processes and include neoplastic, inflammatory, and infectious etiologies. This manuscript focuses on manifestations of pulmonary Langerhans cell histiocytosis (PLCH) and lymphangioleiomyomatosis (LAM).

Description of the cases: Three female patients with LAM and one with PLCH are described. Stress dyspnea was a key symptom. There were similar cyst patterns in more than one lung lobe with a slow, progressive course. Histopathology confirmed the LAM diagnosis resulting from the nodular proliferate and the cyst wall that strongly expressed Human Melanoma Black-45 (HMB-45). A typical constellation for PLCH was demonstrated in high-resolution computed tomography (HRCT). It was found to be disseminated and relatively thick-walled cysts, mainly in the upper and middle parts. An individualized therapy was applied. Three patients with mild symptoms were followed up, including HRCT evaluations. Sirolimus was administered to one patient with a severe manifestation of LAM.

Conclusion: LAM and PLCH are rare. High-resolution computed tomography is an essential diagnostic tool. Lung emphysema as misdiagnosis should be avoided. The characteristics of pulmonary cysts, the cyst’s wall regularity, and identification of associated pulmonary lesions, should be evaluated. A promising new therapy concept are mTOR inhibitors are, especially in LAM. The most important recommendation in PLCH is the cessation of cigarette smoking. HIPPOKRATIA 2021, 25 (2):83-86.

Obtaining an accurate diagnosis of cystic lung disease can be challenging due to their rarity in everyday practice. This case series describes two of the most common cystic diseases, PLCH and LAM, to help the reader understand their clinical features and imaging patterns. The goal is to recognize the importance of history-taking and the different patterns and heterogeneous manifestations of cystic lung diseases versus, e.g., lung emphysema.

No informed consent was obtained because the identifying characteristics of the research participants were de-identified; this study was retrospective in nature.

The heterogeneous manifestations of pulmonary cystic diseases in three female patients with LAM and one female with PLCH are described (Table 2). Two of them smoked cigarettes continuously or occasionally. The symptoms presented at admission varied and included stress dyspnea, progressive cough, hemoptysis, recurrent pulmonary infections, and spontaneous pneumothorax. Sleep-related breathing disorders and repair of congenital stenosis in childhood were recorded in the previous medical history of two patients. No obstructive or restrictive pathologies in lung function were detected. Serum vascular endothelial growth factor D (VEGF-D) was significantly high (3,970 ng/mL) in one; two patients had levels of ~0.8 ng/mL, which did not exclude a LAM diagnosis. Video-assisted thoracoscopic surgery was performed for lung biopsy in two patients. Histopathology confirmed the LAM diagnosis resulting from nodular proliferation. The cyst wall strongly expressed Human Melanoma Black-45 (HMB-45). LAM was diagnosed in one patient without histological confirmation. This was recommended for progressive disease. 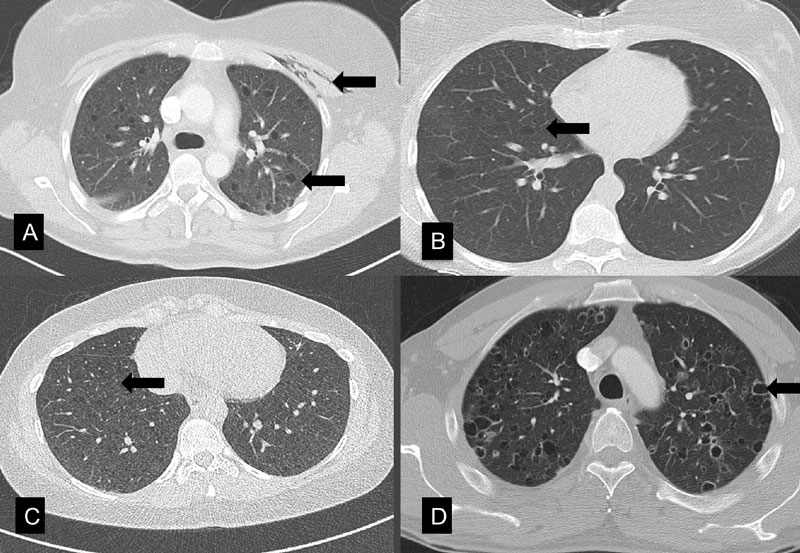 Individualized therapy was applied; one patient was administered sirolimus with target serum VEGF-D levels of less than 10 ng/mL due to severe symptoms. The previous smokers were recommended to abstain from tobacco. Three patients with mild symptoms were followed up, including HRCT evaluations during the last three years.

In lymphangioleiomyomatosis, a multisystemic disease, there is progressive replacement of the lung parenchyma by cysts, which are associated with immature smooth muscle-like cell proliferation and perivascular epithelioid cells (LAM cells) around the lymphatic vessels. In case a biopsy is performed, identification of spindle-shaped “smooth-muscle-like” cells in the wall of the lymphatic vessels that strongly express HMB-45 is a hallmark of diagnosis.

LAM can be sporadic and affects females between menarche and menopause. Potential findings of angiomyolipomas can also be associated with tuberous sclerosis complex (TSC)2,3. LAM patients commonly present with stress dyspnea or spontaneous pneumothoraces. HRCT findings show diffusely distributed, regular, 0.2-3 cm round, thin-walled cysts. These prompt early clinical suspicion. In women with TSC, the presence of few lung cysts with normal lung function does not necessarily predict a favorable outcome3. Currently, LAM is accepted as a low-grade neoplasm disseminating in the lymphatic system as metastatic lymphangioleiomyomas2. Lesions of the thoracic duct with chylous pleural effusions, lymphadenopathy, splenomegaly, and angiolipoma of the kidney may occur. Pleurodesis is recommended prior to recurrent pneumothorax and chylous pleural effusion.

The diagnosis is confirmed by identifying increased VEGF-D serum levels4. Surgical lung biopsy is recommended when VEGF-D quantification is unavailable or its serum levels are not increased. Regarding the diagnosis confirmation and diagnostic criteria, the recent guidelines of the European Respiratory and the American Thoracic societies recommend VEGF-D levels >800 pg/mL as a diagnostic criterion with high specificity for LAM, rendering the need for biopsy unnecessary. The advent of HRCT has enabled a diagnosis solely on CT image patterns analysis, thus eliminating the necessity for a biopsy5 and its associated risk.

LAM was shown in recent studies to have a better prognosis and slower progression than previously thought, although, in individual patients, the disease’s course varies. Disease progression exhibits high variability, and numerous LAM patients do not require treatment intervention, while fewer patients will progress to respiratory failure. Mutations in the TSC1 or TSC2 gene were described, affecting the downstream mTOR signal transduction pathway, leading to clinical trials that demonstrated the mTOR inhibitors’ beneficial effect. Everolimus improved some measures of lung function and exercise capacity. Following sirolimus, there was an improvement in vital capacity but not in forced expiratory volume in one second (FEV1)6,7. Hormonal therapy has been shown to be ineffective, and statins can promote LAM progression.

Lung transplantation is an option for late-stage patients and advanced disease; response to corticosteroids is doubtful. LAM-affected patients survive better than other groups after lung transplantation8, but emerging evidence of de novo invasion of the transplanted lungs by recipient’s LAM cells3 suggests migration to the lungs from the lymphatic system, kidney, or uterus, and supports the metastatic nature of LAM.

It remains controversial whether PLCH is an inflammatory or polyclonal neoplastic disease. Patients with PLCH have high pulmonary osteopontin expression. This results in increased migration of Langerhans cells and accumulation in the lungs and occasionally in other organs, which can activate an inflammatory process, potentially causing dysfunction of the affected sites9,10. Patients’ mean age ranges from 20 to 50 years without gender preference. Previous or current smoking history is associated with PLCH in over 90 % of cases, including passive smoking. Progressive dyspnea on exertion manifests as the most common symptom. Other commonly presenting symptoms are cough and spontaneous pneumothoraces (up to 70 % of cases), but patients can also be asymptomatic. Another characteristic radiographic finding is the presence of nodules that progressively tend to cavitate and form typical cysts. However, they may disappear either spontaneously or after smoking cessation. The cysts’ predominant locations are the upper lung zones, sparing the costophrenic sinuses’ region. These vary in number and size9,10. They are irregularly shaped and can be thick- or thin-walled. The latter can have bizarre shapes and coalesce. Recurrent pneumothoraces may occur as a complication. The therapeutic principle is the cessation of cigarette smoking. Thus, restoration of the normal condition can be achieved in the early stages. Patients with PLCH who have never smoked and those with malignant histiocytosis should be excluded.

The main limitation of the current series is the small number of reported cases not allowing for general recommendations. However, it highlights useful clinical information, supported by sufficient imaging material for related specialists, such as chest physicians and thoracic surgeons.

Cystic lung diseases are rare. They should be considered for a differential diagnosis; misdiagnoses such as lung emphysema should be avoided. Stress dyspnea is a pivotal symptom along with the cystic patterns in more than one lung lobe in HRCT and a slow, progressive course. HRCT is an essential diagnostic tool, while mTOR inhibitors are a promising new therapy, especially in LAM patients. The most critical recommendation in PLCH is the cessation of cigarette smoking.

Authors have no conflict of interest to declare.