Background: Growing resistance to clarithromycin is a major concern regarding treating Helicobacter pylori (H. pylori) infection. Resistance rates have a great variation even in different geographic areas within the same country and are associated with point mutations of the microbial 23S rRNA (A2142C, A2142G, and A2143G). Given the absence of available data in Thrace, the objective of this study was to estimate the resistance of H. pylori to clarithromycin and identify specific mutations that contribute to clarithromycin resistance.

Methods: In this prospective study, we enrolled consecutive patients referred for dyspeptic complaints who underwent upper gastrointestinal endoscopy over two years. Gastric biopsies from corpus and antrum were initially tested for the presence of urease by a rapid urease test. Urease positive samples were followed by real-time PCR to confirm the presence of H. pylori and to detect point mutations.

Results: A total of one hundred and thirty patients were included in the study (72 women and 58 men). Resistance to clarithromycin was detected at 23.2 %. Neither gender nor age was independently correlated with resistance rate in our patient group. The most common mutations were A2142G and A2143G.

Conclusions: A high rate of H. pylori resistance to clarithromycin was observed in our region, implicating that it should be addressed in accordance with the recommendations provided by national and international guidelines. Molecular testing should be considered an integral tool for effective monitoring in case of suspected antibiotic resistance. HIPPOKRATIA 2021, 25 (2):51-55.

Ιsolation and culture of Helicobacter pylori (H. pylori), a gram-negative bacterium that colonizes the stomach, was first described by Warren and Marshall in the 1980s. Today, approximately 50 % of the world’s population is infected. Prevalence is highly variable among regions due to existing socioeconomic differences1-5.

H. pylori has a pivotal role in the pathogenesis of multiple gastrointestinal illnesses like chronic and atrophic gastritis, duodenal and gastric ulcer disease, and gastric adenocarcinoma. Additionally, there is ongoing research regarding extra-gastric gastroduodenal diseases linked to H. pylori. These manifestations include an extensive spectrum of metabolic, hematologic, neurologic, and dermatologic aliments6-9.

The main component of modern H. pylori treatment regimens is clarithromycin. Clarithromycin is a macrolide that inhibits protein synthesis by binding and slowing down bacterial ribosomal unit activity10,11. In a meta-analysis including patients who received clarithromycin-based therapy, the success of eradication rates for the H. pylori sensitive and resistant strains accordingly were as high as 90 and 22 percent, respectively12. Additionally recent data show that resistance to macrolides increases due to its extended use for different indications13. As a result, the success rate of triple therapies containing clarithromycin is declining to unacceptable levels.

H. pylori clarithromycin resistance is predominantly caused by point mutations in the peptidyl transferase region encoded in domain V of the 23S rRNA gene. Common mutations are A2143G, A2142G, and A2142C. These are responsible for most cases of primary resistance to clarithromycin in the western world12-16.

In the present study, we aimed to i) estimate the resistance to clarithromycin in Thrace, Greece, ii) describe the responsible common mutations, and iii) briefly review the most recent available data to assist clinical decision making in choosing optimal treatment for patients affected by H. pylori infection.

This prospective cohort study enrolled all consecutive patients referred to the Endoscopy Department of the University General Hospital of Alexandroupolis from January 2017 to December 2019. We specifically included only patients naïve to H. pylori treatment (Table 1). Patients were excluded if under 18 years of age or had received antibiotics or proton pump inhibitors (PPI) in the previous three months.

A written and signed informed consent was obtained from all participants. The protocol was approved by the Ethics Committee of University General Hospital of Alexandroupolis (decision No 35, date: 3/6/2015).

All patients underwent an upper gastrointestinal endoscopy performed by an Olympus Exera Video Gastrointestinal Endoscope (Olympus, Tokyo, Japan). We obtained two sets of biopsies from the gastric antrum and the corpus. Both biopsies (from antrum and corpus) were used to increase diagnostic accuracy. Samples were initially tested for the presence of urease with the use of a rapid urease test (Pronto Dry, Gastrex, Gilly Lès Cîteaux, France). Due to rapid urease tests’ high sensitivity and specificity, only urease positive samples were further processed for DNA extraction17-21.

Biopsies were placed in 1.5 ml Eppendorf tubes (Eppendorf AG, Hamburg, Germany) with saline solution and transferred to the Microbiology Department. DNA was extracted using the NucleoSpin Tissue Genomic DNA Purification kit (Macherey-Nagel, Duren, Germany) according to the manufacturer’s instructions (briefly described below). Initially, biopsies were cut into small pieces, placed in 1.5 ml sterilized tubes, and suspended in 180 μL of T1 buffer and 25 μL proteinase K. The mixture was incubated at 56 °C for 1-3 hours (pre-lyse). After that, 200 μL of B3 buffer was added, and samples were incubated at 70 °C for ten minutes (Lyse). In the next step, we added 210 μL of 96-100 % cold ethanol (adjust DNA binding conditions). The supernatant was collected after centrifugation at 11,000 ×g for one minute (Bind DNA). The DNA pellet was washed two times (first wash with 500 μL BW buffer and second wash 600 μL B5 buffer) and centrifuged at 11,000 × g for one minute (wash silica membrane). Next, the silica membrane was dried by centrifugation at 11,000 × g for one minute (Dry silica membrane). After that, 100 μL BE buffer was added, incubated at 70 °C for one minute, and centrifuged at 11,000 × g (for one minute). DNA concentration was checked with the NanoDrop 2000UV-Vis Spectrophotometer (Thermo Scientific, Wilmington, Delaware, USA) and stored at -20 oC until used.

DNA was amplified for the 23SrRNA gene by a method primarily described by Oleastro et al. It is a real-time polymerase chain reaction (PCR) used to detect H. pylori and associated gene mutations of clarithromycin resistance (A2142C, A2142G, and A2143G), at the same time. This assay included amplifying a 267 bp fragment of the 23S rRNA gene by probe hybridization and thermal analysis by FRET (fluorescence resonance energy transfer) technology using the Roche LightCycler (Roche, Basel, Switzerland)22,23. The LightCycler was tuned according to the following protocol: First Denaturation at 95 οC for 10 min, followed by Proliferation (45 cycles: 95 ο C for 0 sec, 60 ο C for 10 sec, 72 οC for 17 sec), then Melting curve (95 °C for 0 sec and 45 °C for 30 sec at temperature transition rate of 20 °C/s; 85 °C at a rate of 0.1 °C/s), and finally Cooling (40 °C for 30 sec). Four different melting curves with melting temperatures (Tm) of approximately 54.11 °C for mutations A2142G and A2143G, 56.29 °C for A2142C, and 61.6 °C for the wild type of strain, were produced by the melting curve analysis of DNA from the positive control strains.

A generalized linear model was used to assess the potential independent correlation of gender and age ≥60 (dependent variables/predictors) with H. pylori resistance (independent variable) in the presence of various symptoms as gastroesophageal reflux disease (GERD), dyspepsia, epigastric pain, anemia, and others (covariates). Medians are accompanied by their interquartile range (IQR), percentages are provided with their 95 % confidence intervals, and all numerical values are given with at least two decimals. The level of statistical significance was set at 0.05. The IBM SPSS Statistics for Windows, Version 26.0 (IBM Corp., Armonk, NY, USA) was used for statistical analysis. The MedCalc® Statistical Software version 19.8 (MedCalc Software Ltd, Ostend, Belgium) was utilized to construct the forest plot.

The flow chart of this study is presented in Figure 1. In total, one hundred and thirty patients with upper gastrointestinal tract complaints were enrolled. There were 72 women (56 %) and 58 men (44 %) with an average of 53 years of age. Fifteen patients were younger than 40 years old (12 %), 71 were between 40-59 years old (54 %), and 44 were 60 years old or older (34 %). Their main symptoms were epigastric pain (27 %) and gastroesophageal reflux (25 %). Five patients had more than one symptom (Table 1). Neither of them had received therapy for H. pylori nor antibiotics and PPI three months before the endoscopy. 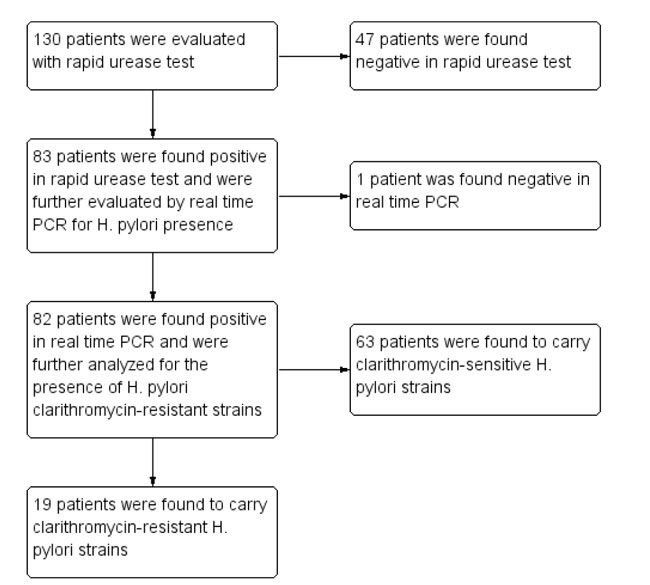 In the current prospective study, the first conducted in Thrace, Greece, we demonstrated that the antimicrobial resistance rate of H. pylori to clarithromycin is as high as 23.2 %. In addition, common mutations such as A2142C, A2142G, and A2143G were also observed. Other studies from Greek researchers report a resistance up to 27.7 %, while in the latest published study by Megraud et al24, using data from European countries, primary clarithromycin resistance in Greece was estimated to be 30 %. Studies derived from different European countries found similar resistant rates, ranging from 20.9 % (France) and  22.6 % (Bulgaria) to 27.4 % (Italy)25-28. These data are in accordance with the results of our study. A summary of all studies assessing H. pylori resistance rates to clarithromycin published from January 2020 until April 2021 (Table 3, Figure 2) demonstrate that high clarithromycin resistance rates are recognized as a current worldwide public health issue, mostly affecting Asian countries17,29-42. 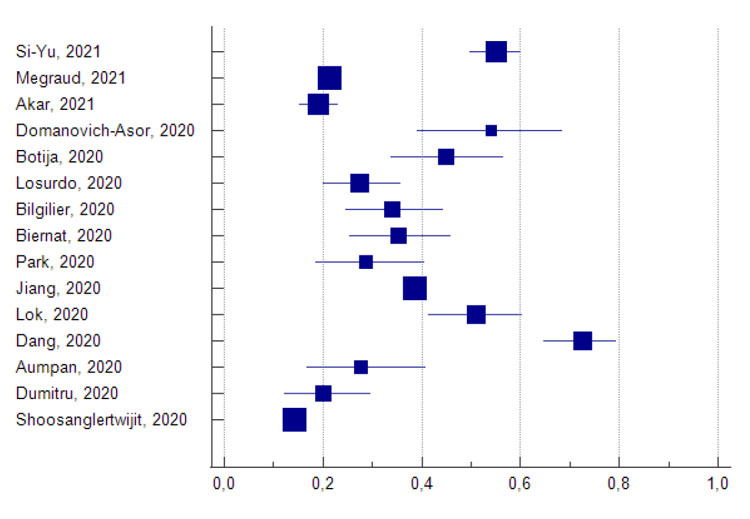 Figure 2: Forest plot depicting Helicobacter pylori resistance to clarithromycin as assessed in studies of Table 2. The square area and horizontal lines represent the study weight and the 95 % confidence interval of each rate as derived from the data of Table 2 studies.

The use of real-time PCR made susceptibility testing more convenient and rapid to perform, allowing us to detect H. pylori and associated gene mutations responsible for clarithromycin resistance at the same time. Compared to standard methods used (culture and histopathologic examination), real-time PCR is faster and more accurate as it can also detect gene subpopulations. Our study found six patients harboring both wild type and mutant genes. This finding might be a reason for treatment eradication failure.

Our study is subject to some limitations. First, we did not perform a sample size calculation, but instead, we have included an equal number of patients as previous studies did. A larger number of patients enriched with demographic data might help us present more comprehensive results. Moreover, additional investigation utilizing DNA sequencing in our sample could be of assistance to further differentiate the responsible mutations. Finally, as there are no previous data from our region, we could not perform any analysis of variability in the local resistance rate.

In conclusion, our results show a high H. pylori resistance to clarithromycin in the Thrace region. These findings have important therapeutic implications and should guide local clinicians to treat H. pylori infection effectively. Moreover, as there is an increased tendency of clarithromycin resistance over the years21,42, surveillance is mandatory, and our results may form the basis for future studies.

Authors declare no conflicts of interest. This study received no financial support.