Background: Even though complement 1q nephropathy (C1qN) was first introduced in 1985, this entity is still unknown and recognized by clinicians due to its rare prevalence (0.2 – 2.5 %) and insufficient emphasis.

Description of the case: A 50-year-old woman was incidentally found to have non-nephrotic proteinuria with a normal glomerular filtration rate. Renal biopsy revealed C1qN with severe fibrosis. The presence of consanguinity and kidney diseases in family members of the patient led to genetic research, and homogenous mutation of c.991G>T (p.G331C) in the WD-repeat domain 19 (WDR19) gene was found. The same homozygous and heterozygous mutations in the WDR gene were found in the relatives of our patient with kidney diseases. One year of follow-up with methylprednisolone and mycophenolate mofetil treatment resulted in partial remission of the kidney disease.

Conclusion: Renal biopsy for patients with non-nephrotic proteinuria without delay is suggested as it might be a surrogate marker of severe injury. Genetic mutations in the WDR19 gene should be searched for C1qN pathogenesis. This is the first adult case report on C1qN from Turkey.  HIPPOKRATIA 2021, 25 (2):87-90.

Most clinicians are unfamiliar with the entity defined as complement 1q nephropathy (C1qN) because it has an extremely low prevalence (0.2 – 2.5 %)1. C1qN is diagnosed when dominant C1q deposition is found on immunofluorescence microscopy of renal biopsy specimens without clinical and serological findings of systemic lupus erythematosus (SLE)2. C1q deposition has been documented in renal diseases other than C1qN, such as lupus nephritis, anti-glomerular basal membrane (GBM) disease, membranous glomerulopathy, immunoglobulin A (IgA) nephropathy, and diabetic nephropathy3-5.

We will review the overlooked entity; C1qN, together with its genetic tendency, clinical findings, differential diagnosis, and management by presenting this case of a 50-year-old woman with non-nephrotic proteinuria and a family history of renal disease. This is the first adult case reporting C1qN from Turkey.

A 50-year-old woman visited our nephrology clinic one year ago due to incidental detection of proteinuria during a routine check-up. She did not have any known chronic disease or medical treatment in her medical history. Her family history reported kidney transplantations performed on her sister, brother, and aunt. Her sister was diagnosed with focal segmental glomerulosclerosis (FSGS) by kidney biopsy in another hospital. Her cousin’s daughter was also diagnosed with chronic kidney disease due to IgM nephropathy with deposition of IgM and C3 with a severity degree of +3 by renal biopsy in a pediatric clinic. Consanguineous marriages were present in our patient’s family. Her parents are first-degree cousins. The patient’s weight was 79 kg, height was 170 cm, and blood pressure was 100/70 mmHg. No abnormalities were detected in the physical examination. However, laboratory results revealed proteinuria of 2.14 g/day and albuminuria of 1.64 g/day with preserved estimated glomerular filtration rate Chronic Kidney Disease Epidemiology Collaboration equation of 100 mL/min/1.73 m2 without hematuria. Serum glucose levels and liver and thyroid function test results were normal. In our center, kidney biopsy has been routinely performed on patients with proteinuria >1 g/day6. Three of 12 glomeruli in renal biopsy specimens were globally sclerotic, segmental sclerosis was present in two of them, and the rest of the glomeruli showed increased mesangial cell proliferation and matrix expansion (Figure 1). Subintimal fibrosis in medium-sized vessels and interstitial fibrosis (20 %) were also observed by light microscopy. Immune fluorescent microscopic evaluation displayed granular pattern deposition of complement 1q (C1q) in the mesangium and capillary walls with a severity degree of +3 and light chains (kappa and lambda) with a severity degree of +2 (Figure 2). There was no deposition of immunoglobulin (Ig) G, A, M, as well as C3 and C4d. Antinuclear (ANA), anti-double-stranded deoxyribonucleic acid (anti-dsDNA), and anti-extractable nuclear antigens (anti-ENA) antibodies (responsible for SLE pathogenesis) were not found by immunofluorescence assay. Anti-glomerular basal membrane antibody (anti-GBM Ab) and anti-neutrophil cytoplasmic antibody (ANCA) were not detected. Serum C3 (0.05 g/L normal: 0.9 – 1.8) and C4 (0.02 g/L normal: 0.1 – 0.4) levels were below normal. Based on these results, the patient was diagnosed with focal segmental glomerulosclerosis due to C1q nephropathy. At this time, proteinuria and blood pressure of the patient increased to 2.7 g/day and 130/90 mmHg, respectively. Methylprednisolone 0.5 mg/kg/day, trandolapril 0.5 mg/day, pantoprazole, and calcitriol with calcium carbonate, and pneumonia and influenza vaccines were administered to the patient. The dose of methylprednisolone was tapered slowly after two months to 4 mg daily. Proteinuria decreased to 1 g/day within seven months of therapy (Figure 3). Partial remission was achieved throughout the subsequent seven months. However, after 11 months, nephrotic range proteinuria (3.2 g/day) with preserved glomerular filtration rate (GFR) was detected. As a result of this first relapse, methylprednisolone therapy was discontinued, and the treatment protocol was switched to mycophenolate mofetil (Cellcept) 1,000 mg twice daily. After two months, proteinuria decreased to 1.4 g/day. As the patient had a history of kidney disease in multiple members of her family (family pedigree shows an autosomal dominant pattern of inheritance) and her parents have consanguinity, the genetic mutations were screened. No mutations were found in the screening panel of more than 400 genes for the nephrotic syndrome, such as ACTN4, ARHGAP24, CD2AP, COL4A3, COL4A4, COL4A5, COQ2, FN1, INF2, ITGA3, LAMB2, LMX1B, MAFB, MAGI2, MYH9, MYO1E, NPHS1, NPHS2, PLCE1, PTPRO, SCARB2, SMARCAL1, TRPC6, TTC21B, and WT1 (Table 1). No mutations were detected in complement factor H (CFH), complement factor H-related protein 1, 2, 3, and 5 (CFHR1, CFHR2, CFHR3, CFHR5), and complement factor B1 (CFB1) genes. However, homogenous mutation c.991G>T (p.G331C) in the WDR19 gene was detected7-9. Moreover, the granddaughter of our patient’s aunt (from the mother’s side), had focal segmental glomerulosclerosis with IgM deposition. Genetic analysis of this relative resulted in the same heterozygous mutation in the WDR gene. The same homozygous mutation was also found in genetic analysis of the patient’s sister with FSGS. 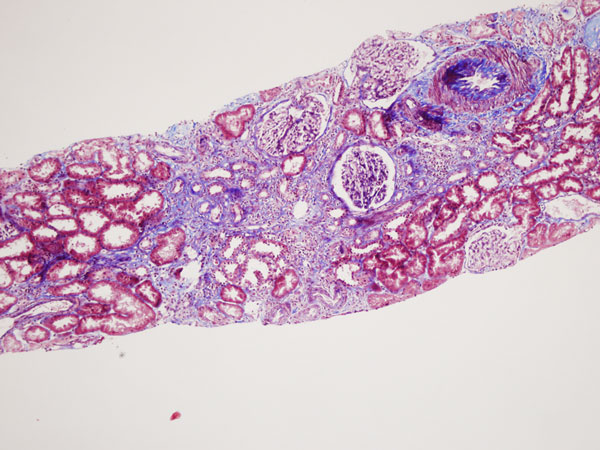 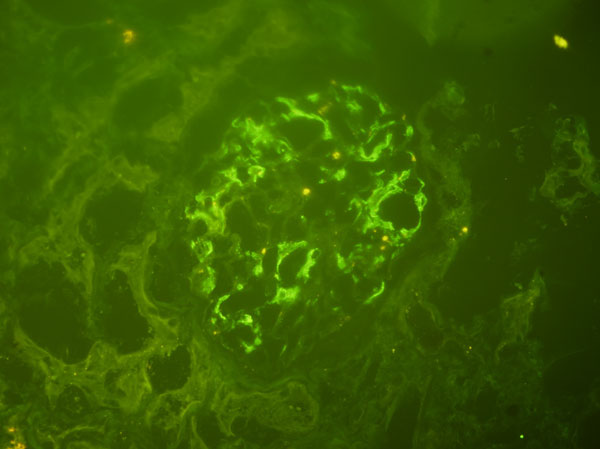 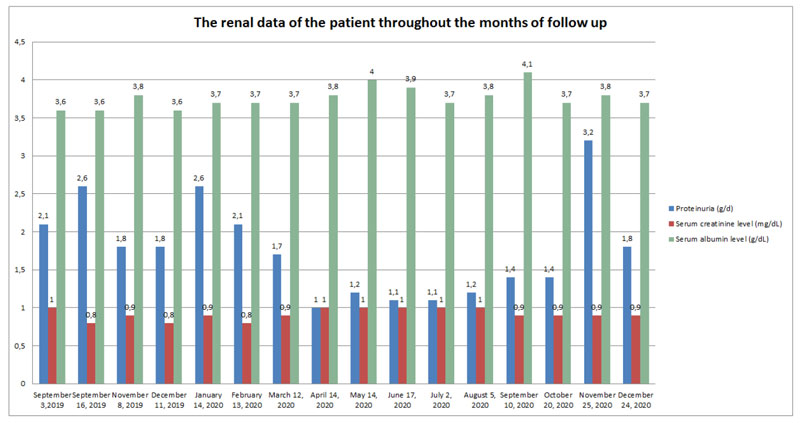 Figure 3: Renal data of the patient throughout the months of follow-up.

C1qN was first recognized in 1985 by Jennette and Hipp in renal biopsies with dominant C1q deposition and mesangial immune deposition in patients without SLE10. Even though C1qN was first introduced in 1985, this entity is still unknown and recognized by clinicians due to rare prevalence (0.2 – 2.5 %) and insufficient emphasis. In fact, C1qN is less diagnosed in clinical practice than in published studies. As it has a rare prevalence and a range of variable clinical presentations (isolated hematuria, isolated non-nephrotic proteinuria, nephrotic syndrome, nephritic syndrome), C1qN is only distinguished by finding dominant C1q depositions in renal biopsies and ruling out lupus clinically and serologically2.

Our patient was incidentally diagnosed with isolated non-nephrotic proteinuria and dominant C1q deposition in kidney biopsy without positivity for ANA and anti-dsDNA. Based on these findings, C1qN was diagnosed. At the first visit, the patient was asymptomatic and had normal findings on physical examination and normal biochemical test results with normal GFR, except for isolated non-nephrotic proteinuria. However, renal biopsy showed a serious degree of glomerular sclerosis, vascular subintimal fibrosis, and interstitial fibrosis besides FSGS with dominant C1q deposition. Some nephrologists do not suggest renal biopsy for these patients with non-nephrotic range proteinuria and normal GFR6. However, severe renal irreversible injury was found in addition to C1qN in the renal biopsy of our patient.

The exact pathogenesis of C1qN is not completely clear for each patient. Several mechanisms were proposed, such as immune complex (anti-C1q antibodies) development resulting in C1q and immunoglobulin deposition in glomeruli via binding of C1q to C1q receptors in mesangial cells; abnormalities in C1q inhibitors leading to activation and deposition of C1q; and presence of other podocytopathies, which induce nonspecific binding of C1q due to its affinity to polyanionic substances through the glomerular passage11,12.

Immune complex-related mechanisms were unlikely in our patient as there was no immunoglobulin deposition in the glomeruli. The presence of consanguinity and multiple histories of FSGS in family members led us to suspect that our patient might have a genetically transmitted mutation causing C1qN. Even though Judkins et al reported an association of deletion of chromosome 7q31.2‐32 with C1qN, no specific gene or mutation was proven for the occurrence of C1qN13. Screening of FSGS gene panel of our patient did not reveal any mutation. Instead, our patient was found to have a c.991G>T change in the WDR19 gene, the significance of which has not been documented in patients with C1qN. WDR19 gene mutations generally cause nephronophthisis-related ciliopathies (syndromes with cystic kidney diseases), which were not present in our patient. WDR19 expression was observed in luminal borders of the renal tubular epithelium. This is why mutations in this gene led to kidney nephronophthisis phenotype. It is rare to find glomerulopathy in the presence of WDR19 gene mutation. However, Lee et al reported mutations of the WDR19 gene in three patients with proteinuria, one of whom had nonspecific immune complex deposits, including C1q14. Another 8-year-old girl with homozygous WDR19 mutation c.1483G>C (p.Gly495Arg) and proteinuric kidney disease was reported by Fehrenbach et al15. It has not been proven that the homogenous mutation of c.991G>T (p.G331C) in the WDR19 gene of our patient can cause C1qN. This is the first case showing the togetherness of these entities. The presence of the same homozygous and heterozygous mutations in the WDR19 genes of our patient’s affected family members made us think that c.991G>T (p.G331C) mutation in the WDR19 gene might have caused the familial FSGS with different immune depositions in different affected family members. This issue will be understood through genetic studies in patients with C1qN and/or c.991G>T (p.G331C) mutation in the WDR19 gene. Interestingly, in this present case, partial response was achieved with immunosuppressive and angiotensin-converting enzyme (ACE) inhibitor treatment.

In this case, we would like to emphasize the early detection of patients with kidney disease by urine analysis in spite of normal GFR and fast progression of renal fibrosis in the presence of non-nephrotic proteinuria. Even though our patient had a normal glomerular filtration rate with non-nephrotic range proteinuria and normal physical examination, renal biopsy showed severe glomerulosclerosis. Therefore, we suggest renal biopsy without delay for patients with non-nephrotic proteinuria. C1qN should be emphasized more in educational courses, as this is the first report of an adult case from Turkey. More studies are needed to evaluate C1qN cases with respect to pathogenesis, progression, and treatment; especially, genetic mutations in the WDR19 gene should be searched for C1qN pathogenesis.

Informed consent was obtained from the patient.