Description of the case: Α 75-year-old male patient with endovascular graft infection presented with a three-day history of fever and was initially misdiagnosed as a bacteremic urinary tract infection. Due to high surgical risk, a drainage tube was placed, and the patient was treated with intravenous antibiotics for three weeks and then with oral antibiotics for two months. On the six-month follow-up, there were no signs of infection recurrence.

Endovascular aneurysm repair (EVAR) is associated with various complications, most commonly hematoma, thrombosis, dissection, arteriovenous fistula, and endoleak, i.e., persistent blood flow outside the lumen of an endoluminal graft but within the aneurysm1-5. Endograft infection complicates 0.4-3 % of endovascular repairs, with mortality ranging between 25 % and 50 %6. Approximately 40 % of patients with endograft infection are diagnosed within three months from repair. Presenting symptoms and findings vary in the literature, the most common being abdominal pain, fever, fatigue, and gastrointestinal bleeding, while a minority of patients can be totally asymptomatic2,5,7–10. Interestingly, 25 % of endograft infections present as gastrointestinal bleeding because of an aortoenteric fistula3,7–11, namely an abnormal communication between the aorta and the gastrointestinal tract, usually shown as contrast-material extravasation into the bowel in abdomen computed tomography (CT). The presence of a fistula facilitates the translocation of enteric flora to the graft, leading to infection. Other pathogenetic mechanisms include contamination of the graft at the time of the implantation, hematogenous seeding from a remote focus of infection (e.g., urinary tract infection) and extension of infection from an adjacent site.

Α 75-year-old male patient with a recent history of endovascular abdominal aortic aneurysm repair presented with fever, which commenced three days before his presentation. No other symptoms were present. He had a history of hepatectomy due to a 9 cm left lobe hepatocellular carcinoma a year before the index admission. Blood and urine cultures grew Serratia marcescens, and he was treated as a bacteremic urinary tract infection according to the susceptibility reports. Because of the poor response to antibiotics, he underwent CT, which showed an abscess adjacent to the aneurysm sac and the endovascular graft (Figure 1A). Because of the high surgical risk, a drainage tube was placed (Figure 1B), which yielded purulent fluid (Figure 2) that grew Serratia marcescens. The patient responded favorably and was treated with intravenous ciprofloxacin (400 mg twice daily) for three weeks and then with oral ciprofloxacin (500 mg twice daily) for two more months. He was discharged after a hospitalization of four weeks. On the last follow-up, six months after his discharge, the patient remained in good health, while consecutive CTs showed no signs of recurrence of infection (Figure 1C).

Figure 1: A) Axial computed tomography (CT) scan of the abdomen showing an abscess adjacent to the aortic aneurysm sac with the endovascular graft (arrow); B) CT with the same patient in the prone position, showing the percutaneous drainage tube (arrow), and C) Repeat CT scan six months after discharge, showing no signs of infection adjacent to the area of the aneurysm sac and the endovascular graft. 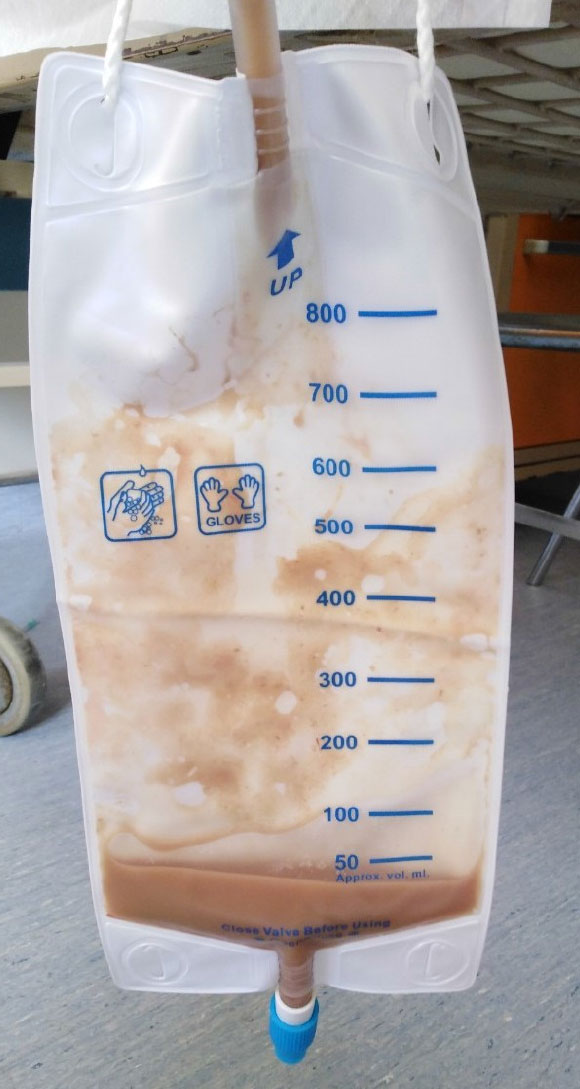 In the reported case, the timing of infection (i.e., five months after implantation) does not support contamination during implantation because, in most of these cases, graft infection occurs within three months of the insertion of the graft6. In addition, although proximity between the aortic sac and the duodenum was detected in the CT scan, we were not able to confirm the presence of an aortoenteric fistula. Finally, no other intraabdominal site of infection could be found. In our patient, the isolation of the same pathogen (Serratia marcescens) in blood, urine, and aortic abscess cultures argues strongly for hematogenous seeding of the graft in the context of a bacteremic urinary tract infection. However, his sickness was brief, leading us to a provisional diagnosis of a bacteremic urinary tract infection. The lack of response, despite the appropriate antimicrobial therapy, led us to investigate further and finally diagnose the infection of the graft.

Pathogens associated with vascular endograft infection include Gram positive, Gram negative, and anaerobic bacteria, as well as fungi. Most graft infections are caused by Staphylococci, usually Staphylococcus aureus, although infections by Streptococci and Enterococci have also been reported. Among Gram-negative bacteria, Escherichia coli, Pseudomonas, Klebsiella, Enterobacter, and Proteus species have been reported3,8–11,12. Interestingly, we could find only one case of endograft infection caused by Serratia marcescens13.

Another important aspect in the reported case was the successful management with drainage and long-term antibiotic treatment. Endograft infection management does not differ from that of other vascular graft infections. The preferred method is open surgery with graft excision and aortic reconstruction or extra-anatomical bypass. Endovascular treatment methods are used in patients with high operative risk or refusing surgery or as a temporary measure in cases of rupture14. We decided to preserve the graft because of underlying severe diseases (hepatocellular carcinoma and a recent stroke). Thus, we performed CT-guided percutaneous drainage in association with long-term antibiotics. There are little data regarding the effectiveness of this strategy. In a small case series, graft preservation had the worst outcomes in cases of aortoenteric fistulae, while there was no evidence that additional procedures, such as percutaneous drainage, surgical debridement, or aneurysm sac irrigation improved outcomes in comparison with antibiotics alone15. However, in our patient, this strategy proved successful, as there was no recurrence of infection. After discharge, the patient was prescribed oral ciprofloxacin and was followed up every 15 days for his initial visits. His fever did not relapse, while one-month and six-month follow-up abdominal CTs showed complete recession of the aortic abscess, and there was no sign of periaortic infection. Oral ciprofloxacin was discontinued after two months.

In conclusion, vascular endograft infections may present with relatively few or no symptoms; therefore, a high index of suspicion is required for an accurate and timely diagnosis. In patients with high operative risk or serious underlying diseases, percutaneous drainage combined with long-term antibiotics might be a useful alternative treatment modality.