Parvoviruses are single-stranded DNA viruses of small size, and B19 is the only one reported to have pathogenic effects on humans1. It is estimated that B19 infection is observed in 1-5% of pregnant women2. As the placental transmission of the virus is possible, 33-51% of cases of maternal infection can finally affect the fetus, more likely between 9 to 20 weeks of gestation2. Even B19 is not teratogenic, it may induce severe fetal complications1. B19 seems to exhibit a tropism for erythroid precursor, myocardial, and placental trophoblast cells1. Consequently, fetal complications are presented when these cell types are affected, and the risk is considerably higher if infection occurs in the first half of pregnancy2. Hydrops Fetalis (HF), characterized by fluid accumulation in the abdominal, pleural or pericardial cavity or in subcutaneous tissue, is considered a B19 pregnancy complication1.

We collected 15 cases diagnosed as nonimmune HF between 13 and 27 weeks of gestation during 2005-2020 and studied tissue samples archived in the Laboratory from each fetus’s heart, liver, and placenta. From all selected tissues, formalin-fixed paraffin-embedded four-micrometer sections were stained with Hematoxylin and Eosin (HE) to evaluate the possible presence of characteristic eosinophilic nuclear inclusion bodies which are pathognomonic for B19 infection. Immunohistochemical analysis was also performed using polyclonal Rabbit Anti-Parvovirus B19 that specifically recognized the VP2 protein of the B19 capsid. Out of the 15 cases studied, we found one positive when immunohistochemistry and HE were applied. So, the positivity rate for B19 infection in nonimmune HF reached 6.7%. In literature, parvovirus is estimated to be present in 8-10% of nonimmune HF3. In this case all tested organs were found positive for the viral protein (Figure 1). HE staining in this sample also revealed some normoblasts with the characteristic brick-red intranuclear inclusion. According to positive case’s clinical data, a 16-year-old primigravida woman presented in the 14th week of gestation for a routine obstetric ultrasound examination. The fetus was diagnosed with HF as ascites and pericardial effusion were observed. She did not mention any B19 infection-related symptoms. Still, Parvovirus serology (anti-IgG and anti-IgM) confirmed maternal B19 infection, and the patient decided to proceed to elective termination, after detailed information about fetal prognosis. 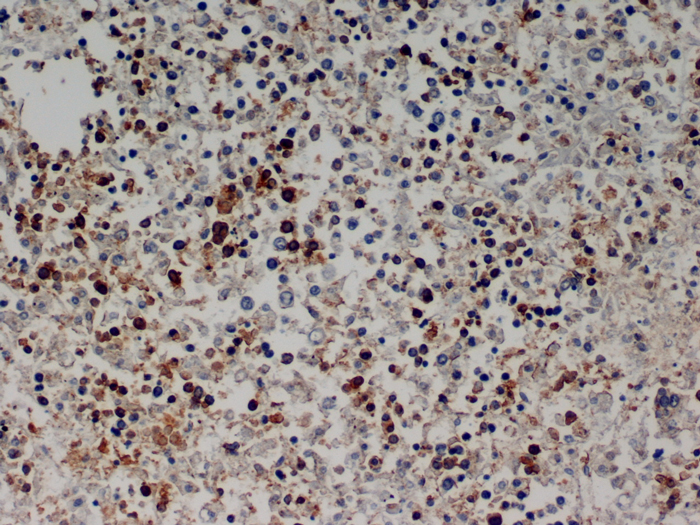 As the risk of nonimmune HF in congenital B19 infection is higher during the first 12 weeks of gestation2, we confirmed the presence of B19 parvovirus in an asymptomatic pregnant in the 14th week of gestation.