Case series: Fifty male patients with large inguinoscrotal hernias underwent this procedure over two years. Twenty-five patients had a transabdominal preperitoneal (TAPP) hernia repair with the combined use of a plug and flat mesh, and 25 patients had TAPP repair using a flat mesh only. The novelty of this technique lies in the fact that after complete dissection of the hernia sack, a plug mesh is placed reversely, and its top edge is anchored onto the lower edge of the inguinal ligament with a standard fixation device. Next, a flat mesh is fixated, and the two meshes are sutured together with polypropylene sutures to form one combined mesh. One hernia recurrence was recorded during the follow-up period after the combined use of the plug and flat mesh. One patient developed a scrotal hematoma which was treated conservatively.

Groin hernias are one of the most common surgical problems worldwide. It is estimated that more than 20 million patients worldwide are treated for hernias each year1.  Up to 43 % of men and 6 % of women may suffer from a groin hernia through their lifetimes2. Most of these patients seek medical treatment in the first few years due to pain, which constitutes the main symptom.

Open techniques have been the gold standard of hernia repair until recently. The Lichtenstein technique is the reference of open repair, showing signs of recurrence in less than 1 % of patients3. Since its introduction in the early 1990s, the laparoscopic hernia mesh repair has been an increasingly popular option4. The rate of laparoscopic hernia repair in high-income countries exceeds 50 % (Australia 55 %, Switzerland 45 %)5. The trans-abdominal preperitoneal (TAPP) approach is becoming an evolving surgical procedure in hernia repair. However, especially in large inguinoscrotal hernias, it requires a higher level of experience by the operating surgeon6. Previous studies have shown increased perioperative complications of TAPP repair, despite the statistically better long-term outcomes, as far as recurrence is concerned7,8.

The current study aims to report the short and long-term outcomes in a case series of patients with large inguinoscrotal hernias who underwent laparoscopic TAPP hernia repair, applying a combined plug and flat mesh. These results are compared with the typical technique of using solely the flat mesh, and the recurrence rate is also recorded.

Over two-years (2018-2019), a total of 50 male patients with large inguinoscrotal hernia underwent laparoscopic TAPP hernia repair. No ethical approval was required since this is a modification of a well-established technique. Patients were divided into two groups. In group A, they were treated using a single flat mesh, whereas in group B, a procedure with the combined use of a flat and plug mesh was performed. Twenty-five patients were included in group A, all with indirect hernias, manifesting an enlargement of the deep inguinal ring, type 3b as classified by Nyhus9. In group B, 25 patients were included; 21 with type 3b indirect hernias, and four patients with type 4, recurrent hernias. Of these four patients, two were previously treated with open hernia repair and two with laparoscopic TAPP repair. Patients’ mean age was 45 years (range: 32 to 56). All cases were elective, and the standard preoperative workup was completed prior to surgery [chest X-ray, electrocardiogram (ECG), and complete blood tests]. The follow-up period varied from two months up to two years. All postoperative complications were recorded, including postoperative pain, and recurrence on the time and follow-up.

For the combined use of a plug and mesh, the patient was placed in a supine position and three ports were placed: one for the camera in the umbilical area and another two 5 mm ports, one on the left and one on the right midclavicular line at the level of the umbilicus. Pneumoperitoneum was established and after the insertion of the camera the anatomical landmarks were defined. The spermatic cord was dissected free from the hernia sack and complete reduction of the sack was performed in all cases. After wide dissection of the preperitoneal space, a plug mesh was placed reversely, and its top edge was anchored to the interior ring of the inguinal canal (Figure 1, Figure 2). Next, a flat mesh sized 10 x 15 cm was fixated and the two meshes were sutured together with polypropylene sutures to form one combined mesh (Figure 3). 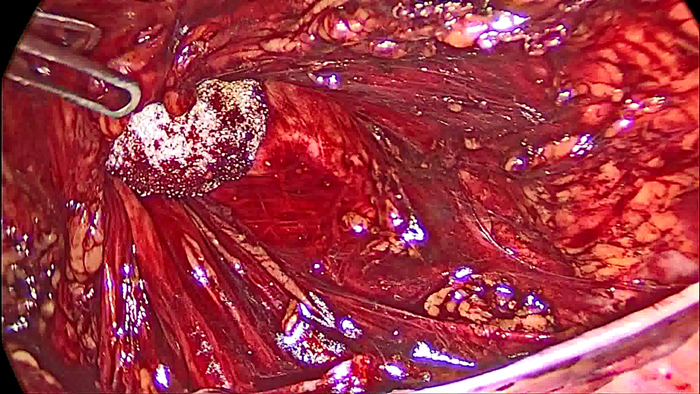 Figure 1: Intraoperative laparoscopic image showing a plug mesh anchored on the lower edge of the inguinal ligament reversely after complete dissection of the hernia sack. Its top edge is anchored to the interior ring of the inguinal canal. 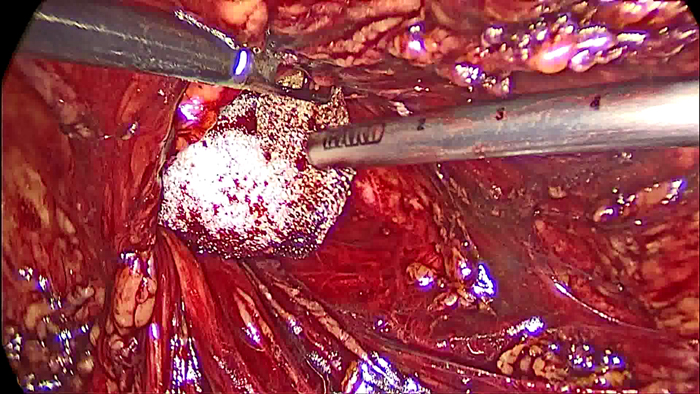 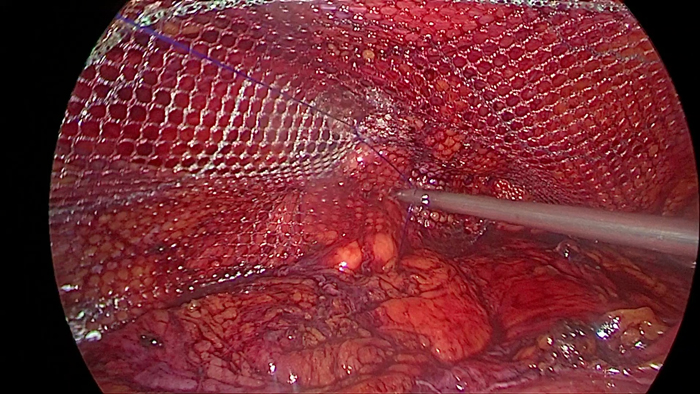 Figure 3: Intraoperative laparoscopic image showing the flat mesh placed on top of the plug, and the two meshes are sutured together with polypropylene sutures to be combined as in one mesh.

All cases were successfully completed laparoscopically and no need to conversion to open surgery was encountered. The average operative time was 50 minutes (35-60 minutes). There was zero mortality, and the postoperative morbidity included two patients who developed a scrotal hematoma, one per group, secondary to the extensive hernia sack dissection. Both were treated conservatively, with one of them requiring repeated needle aspiration of the hematoma. None of the patients reported severe pain that could not be adequately controlled with non-opioid analgesics.

In group A, two incidences of recurrence were recorded, and were both managed via a TAPP repair with the combined used of plug and flat mesh but were not included in this present study. In group B, one recurrence was recorded, concerning a patient with a large defect hernia, which appeared after an open prostatectomy. The patient underwent a Lichtenstein tension-free hernia repair, with a combined use of plug and flat mesh. The odds ratio for the recurrence between the groups is 0.4792 (95 % confidence interval: 0.0406 to 5.6519) and p-value 0.5590, which is not statistically significant.

Laparoscopic hernia repair tends to become the standard of care in many centers today, since it provides comparable result to open repair with less postoperative pain and shorter recovery time. However, in contrast to other surgical procedures, the laparoscopic hernia repair is a completely different operation to the open approach. Thus, even experienced surgeons must familiarize themselves with totally different anatomy and approach. Therefore, it was no surprise that in the early stages the rate of serious complications was significantly higher after laparoscopic repair compared to open, a factor strictly associated with the surgeon’s experience on the laparoscopic techniques5,10 .

Currently, the recommendations on inguinal repair state that the laparoscopic technique should be preferred in younger patients and bilateral hernias. This consensus also outlines the possible difficulty of a laparoscopic surgical field which has been previously radiated, recommending an open approach in those patients. It is also suggested that in large hernia sacs where the content is intestinal, the use of laxatives preoperatively can reduce the volume of the herniated part, facilitating an easier reposition11,12. In addition, as far as the technical aspect of the repair is concerned, there has been a debate on single or multi-port approach to hernia repair. We prefer the latter, as there is no significant difference in the surgical outcomes13. TAPP has been shown to have the same recurrence rates as open techniques in unilateral groin hernias and significantly lesser postoperative pain, either acute or chronic14,15.

Laparoscopic management of large inguinoscrotal hernias poses a challenge even for the experienced surgeons. The use of mesh, which is a standard of care in the current surgical management of hernias, is the most important factor in minimizing the hernia relapse. The flat mesh must be placed so that it should overlap the hernia orifice by 3 cm minimum10,16. The main reason for recurrence is the sliding of the hernia sac under the mesh tension free, as the flat mesh placement may be ineffective in upholding the sac. The combined use of the plug provides an extra retain on the flat mesh, thus securing the closure of the hernia, as it is well known in the open procedures17. Currently, there is no published data on the combined use of plug and flat mesh in the laparoscopic repair of inguinoscrotal hernias18,19.

Typical complications of the inguinoscrotal hernia repair are inguinodynia, scrotal hematoma, surgical site infection, and hernia relapse20. The last has been significantly reduced since the use of mesh has become a standard in this operation. The reported recurrence rate after TAPP in the literature is 1.8-3 %, percentage which is in accordance with the total recurrence rate of our study (three patients, 6 %). The rate was higher in group A (8 %) than group B (4 %), and the fact that did not reach statistical significance is attributed to the number of patients included in the study. A recent case report on recurring hernias states that the improper fixation of the mesh is the most important factor for recurrence after a TAPP procedure6.

Less common complications such as mesh migration have been associated with poor surgical technique and pose a challenging clinical problem. In our study, the only recorded complication was a 4 % (1 out of 25 patients in the study group) incidence of scrotal hematomas that were treated conservatively by aspiration of the blood. Other fluid collection, associated with the mesh presence, might emerge, but usually resolves without intervention21. Some surgeons use drainage to minimize the serum exertion, removing it in the third postoperative day. A systematic review studying adjunctive techniques to seromas’ reduction, states that surgical drains can significantly reduce seromas in difficult dissections, but it remains questionable whether drainage should be used for a prolonged period22.

None of the patients reported severe pain that could not be adequately controlled with analgesics23. The literature reports that 10 % of patients experience chronic pain after the placement of mesh in open techniques, and significantly less in laparoscopic repair24,25.

A limitiation of this study is the time of follow-up. A small percentage of the patients complied to the two-year follow-up period designed for this study. A larger scale study with longer follow-up would provide additional information on the modified technique.

A recent study suggested that the robotic-assisted TAPP could have more advantageous effects than typical laparoscopy, especially in rather sizeable scrotal hernias, despite the higher mean surgical times26. Further studies would provide more data on this technique.

Concluding, the laparoscopic repair of a large inguinoscrotal hernia with the combined use of plug and flat mesh is a safe and effective technique with excellent short-term outcomes. It is a simple modification of the standard TAPP procedure, and we strongly believe that it could minimize the recurrence rate in patients with large inguinoscrotal hernias. Surgeons with the appropriate laparoscopic skills to perform a TAPP procedure will have no difficulty combining a plug with a flat mesh.

All authors declare that they have no conflict of interest.

We would like to thank Ms. Elena Fourligka, English Literature Teacher, for the technical language refinement of the manuscript.