Background: Dense deposit disease (DDD), a subtype of complement factor 3 glomerulopathy (C3G), is a rare entity associated with dysregulation of the alternative complement pathway. It usually affects children, with a 50% likelihood of progression to end-stage renal disease within ten years of diagnosis.

Description of the case: We report the case of an adolescent male with acute nephritic syndrome and nephrotic range proteinuria, initially diagnosed as acute post-streptococcal glomerulonephritis (APSGN). Despite his spontaneous improvement, renal biopsy, performed due to a persistently low C3 level for over 18 weeks, confirmed the diagnosis of DDD. Complement and genetic studies showed high levels of C3-nephritic factor and risk polymorphisms for developing the disease. He was treated with prednisolone and mycophenolate mofetil (MMF). At the last follow-up, 15 months from onset, the serum creatinine level and 24h-hour total protein excretion were normal.

Conclusion: C3G (including the DDD subtype) should be suspected in apparent APSGN with atypical clinical features at presentation/follow-up, even in the case of spontaneous improvement. Timely and accurate diagnosis, based on histopathological, complement, and genetic studies, is important to initiate the appropriate treatment aimed at preventing or slowing the disease progression. HIPPOKRATIA 2020, 24(4): 191-193.

Acute post-streptococcal glomerulonephritis (APSGN) is an immunologically mediated disease characterized by a decrease in serum complement factor 3 (C3) due to complement activation1, which usually normalizes within eight weeks2. In the case of APSGN with a low C3 level persisting after a period of eight weeks, renal biopsy should be performed to rule out idiopathic membranoproliferative GN (MPGN), which may be immunoglobulin-mediated or non-immunoglobulin-mediated. Non-immunoglobulin MPGN and other proliferative patterns of GN with dominant C3 expression are currently classified as C3 glomerulopathy (C3G)3,4.

Dense deposit disease (DDD), a subtype of C3 glomerulopathy (C3G)5, is a rare entity, affecting 2-3 people per 1,000,000. It presents mainly in childhood, with 50 % progression to end-stage renal disease (ESRD) within ten years of diagnosis. It is more frequently encountered in younger children (<10 years) and females6.

We report the case of an adolescent male with acute nephritic syndrome and nephrotic range proteinuria, initially diagnosed as APSGN, but renal biopsy confirmed the diagnosis of DDD.

He had no oliguria or edema. He was treated with a low salt diet and cefuroxime for ten days. His blood pressure normalized on the 9th day, and the serum creatinine level decreased to 0.6 mg/dl on the 10th day. The proteinuria grad-ually decreased to 330 mg/m2/24h, ten weeks from onset. A renal biopsy was decided on when the C3 level remained low (35.6 mg/dl) at 18 weeks from onset, and the diagnosis of DDD was made (Figure 1, Figure 2, Figure 3). 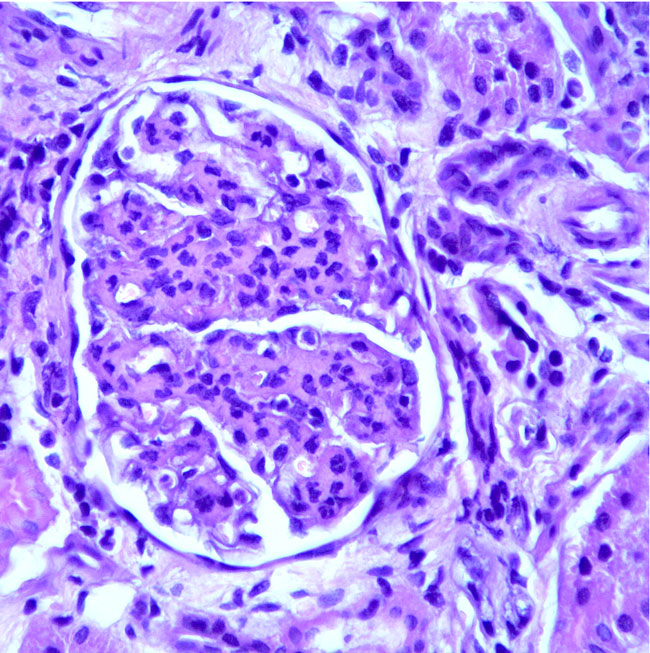 Figure 1: Light microscopy image (hematoxylin and eosin stain, x 400) showing a glomerulus with endocapillary proliferation and exudative features, with numerous neutrophils in the glomerular lumen and thickening of the glomerular basement membrane, and segmental lobular architecture (a sign of membranoproliferative glomerulonephritis). 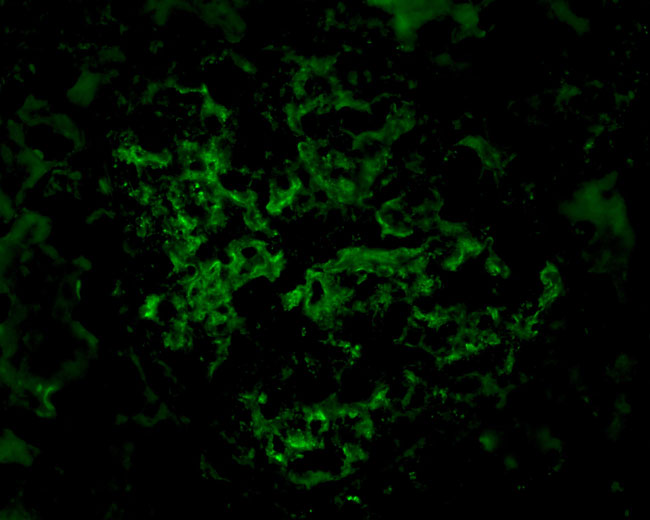 Figure 2: Immunofluorescence image (C3, x 400) showing staining of the glomerular capillary walls and the mesangium in a discontinuous pattern, with some spherical structures. 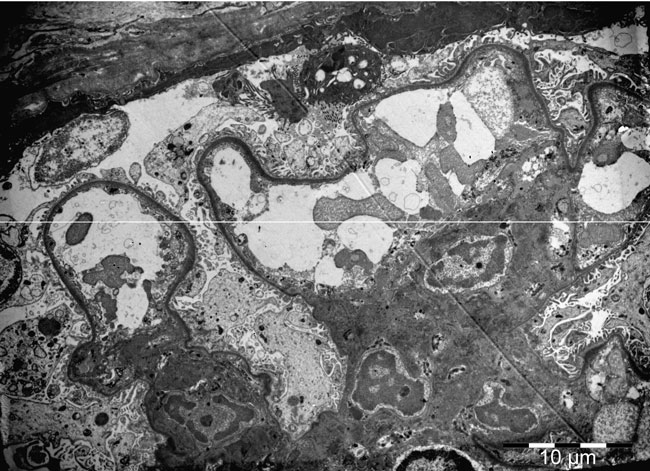 Figure 3: Electron microscopy image (Uranyl acetate and lead citrate, x 2200) showing a segment of a large glomerulus with intramembranous and mesangial electron-dense deposits, unevenly distributed in a ribbon-like fashion, among the glomerular base membranes, with mild to moderate glomerular involvement.

Following the biopsy findings, he was treated with prednisolone 60 mg/m2/day for four weeks, followed by 40 mg/m2 on alternate days for four weeks. Complement studies revealed the presence of C3-nephritic factor7: 16.8 %, (NR: <10 %), and an increase in terminal complement pathway activation marker, serum C5b-9: 436 ng/mL (NR: 110-252 ng/mL). C1q, C4, and complement factor H, I, B (FH, FI, FB) antigens were within the normal range. Anti-factor H IgG and anti-C1q IgG autoantibodies were negative. Genetic studies showed no mutations in the FH, FI, FB, membrane cofactor protein, C3, thrombomodulin (THBD), or factor H-related protein 5 (CFHR5) genes. The patient was homozygous for the rare allele of the Y402H polymorphism of the FH gene (and the H1 haplotype containing this allele), and heterozygous for the R102G and P314L polymorphisms of the C3 gene. Following the complement study, mycophenolate mofetil (MMF) was prescribed (550 mg/m2 twice daily).

The case of an adolescent male with DDD and complete recovery is described here. This patient was initially diagnosed as suffering from severe PSGN. However, despite his marked clinical/laboratory improvement, the serum C3 level remained low beyond eight weeks, leading to the need for renal biopsy, which showed findings compatible with DDD5.

C3G (C3GN and DDD) is frequently associated with autoantibodies directed against C3 or C5 convertases, which cause complement dysregulation by increasing the half-life of these normally short-lived enzymes8. Mutations in the FH, FI, and C3 genes have been identified in several patients with DDD associated with a C3 nephritic factor9. Our patient had a C3-nephritic factor and was homozygous for the rare allele of Y402H polymorphism of the complement FH gene and heterozygous for the R102G, P314L polymorphisms of the C3 gene, all reported as risk factors for the development of DDD9,10.

DDD usually affects children, more frequently females, and at a younger age (<10 years), with a 50 % rate of progression to ESRD within ten years of diagnosis6. Our patient experienced marked spontaneous clinical and laboratory improvement. The absence of crescents in renal biopsy and the relatively low levels of C3-nephritic factor may have contributed to his favorable outcome.  A similar spontaneous resolution with no immunosuppressive treatment was reported for the first time in an 11-year-old girl with DDD and nephrotic syndrome11.

Recently, a retrospective case series of four children with DDD was published. At their last follow-up (ranging from 2-120 months), all the children had persistent proteinuria and hematuria, and two showed progressive renal dysfunction, with one requiring a kidney transplant12. Steroids were used in all four patients and MMF in three of them12. The above cases, and ours, highlight the variable outcomes of DDD, ranging from complete recovery to ESRD.

C3G should be suspected in apparent PSGN with atypical clinical/laboratory features at presentation or follow-up, even in the case of spontaneous improvement, in order to initiate appropriate treatment aimed at preventing or slowing the progression of the disease.

The authors declare that they have no conflict of interest relevant to the material discussed in this article.