Methods: We prospectively recorded the neonatal and maternal characteristics of singleton, low-risk, term infants over a year. Infants were defined as SGA if their birth weight was under the tenth centile, classified both by population-based centiles and customized centiles, adjusted for maternal and innate factors. We performed a comparative analysis utilizing linear regression analysis and calculating the receiver operating characteristics (ROC) curves.

Infants born small for gestational age (SGA) represent a heterogeneous group that consists of growth-restricted and potentially vulnerable infants and constitutionally but otherwise healthy infants1. Whereas growth-restricted infants do not reach their genetic growth potential, constitutional SGA infants represent the one end of the usual spectrum of size1. Regarding SGA infants, the most popular definition is based on birth weight below the tenth percentile, adjusted for gender and gestational age using appropriate reference data2. The population-based centiles that have been traditionally used are adjusted for gender and gestational age but do not account for any other growth modifying factors3. Customized models, on the contrary, have been adjusted for maternal and innate factors such as maternal weight, height, ethnicity, or parity4.

The customized charts have been introduced into the clinical practice in several countries to assess the neonatal growth in the term and preterm population so far1,4-10. Studies have suggested that customized centiles may be more precise in detecting SGA infants at increased risk of perinatal morbidity than population-based centiles1,4-10. However, the theoretical advantage of customization may be of limited value when applied in term infants. Furthermore, evidence suggests that data regarding the prediction of perinatal morbidity may have been overestimated11,12. Hence, the evidence about the validity of customized growth centiles compared to population-based centiles is scarce to draw any conclusions13,14.

The study was conducted from January 2014 to January 2015 in a tertiary Neonatal Unit of a University Hospital. During the study period, we prospectively enrolled all Greek origin infants born at term, at 37 to 42 weeks’ gestation, by a singleton, low-risk pregnancy as described below. We excluded infants who were of non-Greek origin, part of multiple births, delivered preterm, whose pregnancy had been complicated with congenital anomalies, or terminated for maternal or fetal reasons to consort with the methodology described in the previous studies4,6,9,15. The Ethical Committee of the Papageorgiou Hospital approved the study (decision No 895) and data were anonymously recorded.

For each infant, we recorded the gestation, the gender, the birth weight measured in the delivery room with an electronic scale, the height, and the head circumference measured within the first 24 hours of age. We also recorded the maternal characteristics, including the ethnicity, the age, the weight as measured at the first antenatal visit, the weight gain during the pregnancy as extracted by the initial and the last trimester weight, the height based on maternal recall. The body mass index (BMI) was extracted from the weight and height according to the formula BMI =weight/height2 (kg/cm2). We recorded the parity, determined the gestational age by ultrasound examination during pregnancy’s first trimester and factors associated with low birth weight, such as gestational diabetes and hypertension. Finally, the computed perinatal morbidity was defined by the need for admission to the nursery due to hypothermia, hypoglycemia, or feeding difficulty.

Infants with a birth weight below the tenth centile were defined as SGA16. The population-based birthweight centiles were based on the revised Fenton’s growth charts adjusted for gestation and gender16. We used the customized birth weight centiles based on the Gestation Related Optimal Weight centile calculator (available at www.gestation.net). The bulk calculator that has been developed by Gardosi et al15,17 utilizes the maternal height, weight at the first antenatal visit, parity, and ethnicity, in a regression analysis model to derive the adjusted for the gender optimal average weight of the fetus at 40 weeks. Additionally, we used Hadlock’s formula to calculate the coefficient of variation and derive the growth centiles at each gestation18. Therefore, the following groups were identified: customised only SGA, population only SGA, customised and population SGA, and non-SGA infants.

The data were analyzed using the IBM SPSS Statistics for Windows, Version 26.0 (IBM Corp., Armonk, NY, USA). We calculated descriptive statistics for maternal and neonatal characteristics. Continuous variables are presented as means ± standard deviation, while categorical variables as numbers with percentages in brackets. The Kolmogorov-Smirnov test assessed the normality of continuous variables’ distributions. We performed comparisons of continuous variables utilizing one-way ANOVA with Bonferroni posthoc analysis. We utilized the Pearson’s chi-square test or Fisher’s exact test to compare categorical variables, as appropriate. The linear regression analysis was conducted to evaluate the association of population-based and customized centile charts (continuous variables) with perinatal morbidity. We investigated for each chart how accurately categories of less than the tenth centile (SGA infants) detected infants with perinatal morbidity by calculating the sensitivity and the specificity. The receiver operating characteristic (ROC) curve analyses were conducted, estimating the area under the curve to determine which model better predicted perinatal morbidity. All performed tests were two-sided, and we considered statistically significant p values less than 0.05 (alpha 0.05).

The maternal characteristics of the study population and the infants classified as SGA by either method compared to non-SGA infants are depicted in Table 1. Maternal BMI was normal in 67 %, and pregnancy was nulliparous in 45 % of the cases. No significant differences were found in maternal characteristics between customized SGA, both customized and population-based SGA, and non-SGA infants (Table 1).

Overall, the mean gestation of infants was 38.3 weeks, and the mean birth weight 3,152 grams. Neonatal morbidity was significantly higher in SGA than non-SGA infants, classified by either centile. The overall morbidity was estimated at 8 %, based on the predefined criteria (Table 2). 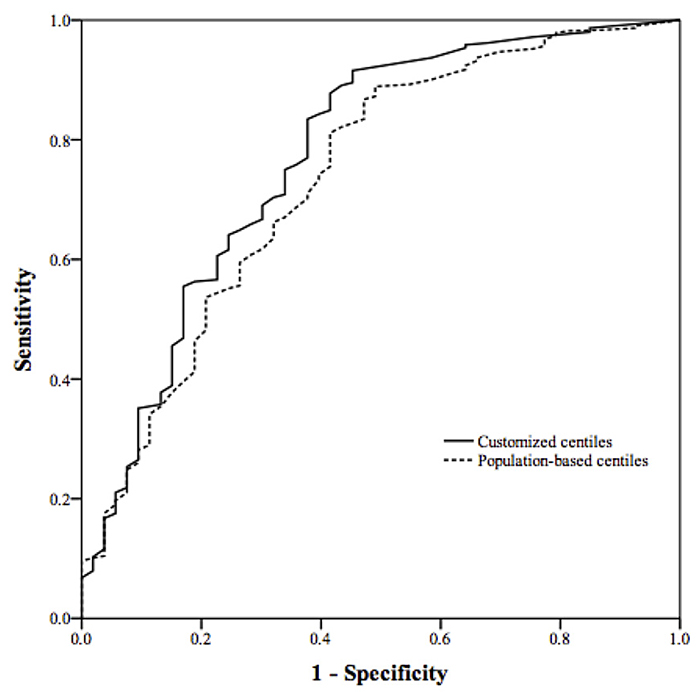 Figure 1: The receiver operating characteristic curve showing how many infants with perinatal morbidity were correctly identified by customized in comparison to populationbased centiles.

In the current study, we also assessed whether population-based or customized centiles were more helpful in predicting perinatal morbidity. Although customized centiles have been proven more sensitive in detecting SGA infants, the evidence regarding the related clinical importance remains scarce. The study by Carberry et al demonstrated that the customized reference had a limited impact on predicting neonatal morbidity among term infants11. In accordance, Charkaluk et al suggested that customization did not significantly improve the detection of infants at risk of poor cognitive outcomes19. A recent study, including nearly a million infants born over 19 years in Scotland, concluded that partially customized centiles did not identify more infants at risk of death than non-customized centiles20. The authors could not fully customize infants due to missing maternal weight and ethnicity data; however, they found that increased risk was evident at term infants with a birth weight lower than the 25th centile, irrespective of whether non-customized or partially customized centiles were used20. Moreover, a Swedish population-based cohort study between 2006 and 2015, evaluating term singleton births with population-based and customized charts, recorded an increased proportion of infants below the median using the customized centiles21. The authors concluded that an adverse perinatal outcome was differently related to each chart cut-off limit; however, it was similar in the smallest 5 % of the population21. In the same aspect, the secondary evaluation of the Generation R study, which included 6,052 participants in the Netherlands, revealed that customized charts were not superior to population charts at identifying SGA newborns at increased risk of adverse outcomes at later age22. Finally, a meta-analysis by Chiossi et al evaluating the effectiveness of customization compared to population-based charts for predicting adverse outcomes included 20 observational studies and concluded that both growth charts could identify SGA infants without evidence of the superiority of any method14. Our findings were in line with previous studies, suggesting that the customized centiles had no better impact than the population-based centiles in detecting term infants at risk of perinatal morbidity.

The fact that both customized and population-based centiles were of similar prognostic value in detecting perinatal morbidity is particularly important when including only term infants. In general, term infants present low morbidity, and therefore, customization would provide limited benefit. Besides, in preterm infants, the customized model based on ultrasonography-estimated fetal weight presents a substantial difference compared to the population-based reference, while in term infants, those references differ a little23. Nonetheless, the pregnancies associated with prematurity should be mostly considered pathological rather than normal, while mostly prematurity is known to be linked with growth restriction and increased morbidity24,25. Thus, although the adjustment for the maternal weight, height, or other factors may improve the amount of SGA detected infants, it fails to detect which infants need closer monitoring.

The main strength of our study is that it is novel in evaluating the effectiveness of customized in comparison to population-based centiles in a Greek cohort. The main limitation of the current study arises from its single-center design. Given that our study was conducted in a population with homogenous characteristics, the adjustment for factors with little variation might have a limited effect. Also, our study population was restricted only to term infants, and thus the generalization of our findings is limited. Notably, no population-based only SGA infants were detected in our study. In previous studies, constitutional SGA infants have been reported in 1 % to 12 %1,4,6. The limited size of our study sample may have prevented us from detecting any constitutional SGA infants in our cohort. Of note, in our study the maternal anthropometrics were similar between groups, and in fact, not different from the average for Greek population. Thus, the fact that limited women with significant weight or height deviation were included, might also explain that no population SGA infants were detected, given that maternal anthropometrics are a factor that could be associated with constitutional SGA infants.

In conclusion, our study suggested that the utilization of customized in comparison to the population-based centiles provided increased accuracy in detecting term SGA infants; however, using the adjusted for maternal characteristics customized centiles could not improve the detection of infants at risk of poor perinatal outcome. Therefore, further studies are warranted to evaluate the clinical importance of customization regarding the short and long-term neonatal outcomes.

Authors would like to thank the GROW International Team, Perinatal Institute, Birmingham, UK, and Miss Marianna Mancini for their assistance in providing the Bulk Centile Calculator. This research did not receive any specific grant from funding agencies in the public, commercial, or not-for-profit sectors.