Subcutaneous fat necrosis (SCFN) is an uncommon and transient condition. It is characterized by erythematous, indurated plaques or nodules commonly at the extremities, while predisposing factors include perinatal distress, asphyxia, meconium aspiration, and hypothermia1. Although the exact pathophysiology is not well-understood, it is presumed that hypoperfusion of the subcutaneous tissue augments saturated fatty acids deposits and tissue cooling; thus, resulting in fat tissue solidification and adipocyte crystallization, respectively, and ultimately SCFN.

A 22-day-old girl was presented to hospital by her parents with an ulcerative wound on her left knee. She was a full-term infant, born by spontaneous vaginal delivery and transferred to a Neonatal Intensive Care Unit due to stained amniotic fluid and severe respiratory distress syndrome. No intubation was needed, while transient hypoglycemia and a mild hypertrophic interventricular septum were noted. The child was discharged to Maternity Unit in good health on day nine. On the next day, she developed edematous erythema in the medial side of the left knee and a small erythematous nodule in the medial side of the right thigh. On the 13th day of life, the initial skin lesion progressed to round superficial ulceration of a 3.1 cm diameter on the medial-posterior surface of the left knee and a mobile erythematous nodule in the right thigh’s medial side (Figure 1a and 1b). Consecutively laboratory exams were normal while ultrasound of the right thigh nodule revealed echogenic elements, indicating probable necrosis without clear vascularity sized 3.3 x 1.1 cm. Ulcer lesions’ cultures revealed mixed pathogens, including Εnterococcus faecalis and Staphyloccocus epidermidis, necessitating intravenous antimicrobial treatment. However, histological examination of the nodule specimen revealed fat necrosis lesions with a mixed inflammatory infiltrate of macrophages and foreign-body type giant polymorphonuclear cells. The cytoplasm of macrophages and polymorphonuclear cells demonstrated needle-shaped crystals in a parallel arrangement. All these findings established the diagnosis of neonatal SCFN. Antimicrobial treatment was discontinued, while local treatment of the ulcerated lesions with antiseptics and healing ointment was administered. The lesions gradually improved (Figure 1c), while no other complication was observed during a 7-month follow-up period. 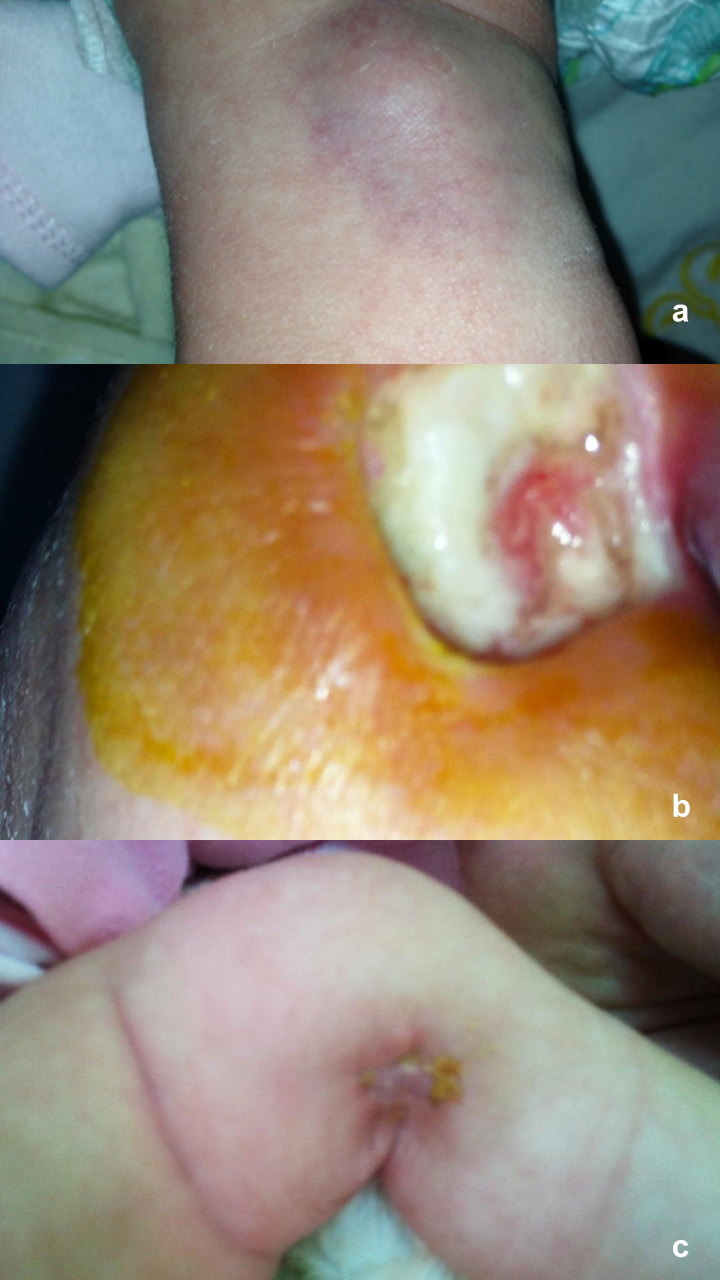 Figure 1: Clinical images showing A) ulceration on the medial-posterior surface of the left knee, B) a mobile nodule in the medial side of the right thigh, and C) stabilized lesions one month later; however, permanent scars developed.

To the best of our knowledge, only two cases of neonatal ulcerated SCFN have been reported in the literature with favorable outcome2.3. SCFN is a self-limiting condition but may be complicated by severe hypercalcemia, which constitutes the primary cause of mortality1. In addition, although rare other serious complications can be developed, such as thrombocytopenia, hypoglycemia, and hypertriglyceridemia. Treatment of uncomplicated SCFN is symptomatic, targeting optimal analgesic medication. In summary, SCFN is a rare, self-limiting condition, while careful follow-up for associated hypercalcemia is needed.