Skip to content
hippokratia.gr > Volume 24 (2020) – Issue 3 > Primary adenocarcinoma of the esophagogastric junction, combined with an obscure hepatoid adenocarcinoma component, as discovered after the development of a metachronous liver metastasis

Case presentation: A 35-year-old man suffering from adenocarcinoma of the esophagogastric junction (EGJ), with negative preoperative studies for metastatic disease, underwent Ivor Lewis esophagectomy. The histologic examination demonstrated a poorly differentiated, IIA (T3N0M0) staged EGJ adenocarcinoma. The patient had been advised not to receive any adjuvant therapy, with the follow-up studies at six months being negative for recurrence. Eleven months postoperatively, he was diagnosed with a bulky mass in the liver’s right lobe, accompanied by elevated AFP serum levels. The percutaneous biopsy revealed the presence of HAC, immunohistochemically positive for AFP. The surgical specimen was re-evaluated and was also found immunohistochemically positive for AFP, re-defining the tumor as combined adenocarcinoma and HAC of the EGJ. The patient received two sessions of transarterial chemoembolization (TACE) of the liver mass. However, following the 2nd TACE session, he developed signs of hepatic insufficiency and expired twenty days later.

Conclusions: It is crucial to identify the presence of a HAC, as HAC seems to have an aggressive course, with limited therapeutic options as well as therapeutic response. HIPPOKRATIA 2020, 24(3): 138-142.

Hepatoid adenocarcinoma (HAC) is a sub-type of alpha fetoprotein (AFP)-producing adenocarcinomas, and may be seen either as a pure form or in conjunction with ordinary adenocarcinoma of the gastrointestinal tract. The majority of HACs are of gastric origin1,2, whereas esophageal tumors are relatively few3-17. Metastatic HACs in the liver are a great mimic of hepatocellular carcinomas (HCCs) from clinical and pathologic aspect18. We present a case of primary adenocarcinoma of the esophagogastric junction (EGJ), combined with an obscure HAC component, discovered after the development of a metachronous HAC metastasis to the liver.

A 35-year-old man was admitted to the First Surgical Department of the National and Kapodistrian University of Athens because of progressive dysphagia and weight loss during the preceding five months. He underwent an upper gastrointestinal endoscopy, which demonstrated a bulky endoluminal mass at the esophagogastric junction (EGJ), causing a near-total occlusion of the esophageal lumen. The histologic examination of the lesion revealed an adenocarcinoma of the distal part of the esophagus. All preoperative tumor marker levels, including AFP, carcinoembryonic antigen (CEA), carbohydrate antigen 19-9 (CA 19-9), and cancer antigen 72-4 (CA 72-4), were normal. The preoperative computed tomography (CT) imaging of the thorax and abdomen, part of the clinical staging of the disease, revealed an abnormal thickening of the wall of the distal part of the esophagus, without any distant metastases, with the disease being clinically classified as cT2N0M0, according to the seventh TNM classification system19. Considering the disease’s clinical stage, the multidisciplinary tumor board of our institution suggested the patient to be operated without receiving any neoadjuvant therapy. The patient underwent an Ivor Lewis esophagectomy, his postoperative course was uneventful and was discharged from the hospital on the 11th postoperative day.

Due to the tumor’s low differentiation grade, the surgical specimen was initially evaluated for the presence of a neuroendocrine component, with the immunohistochemical staining for chromogranin A and synaptophysin being negative (Figure 1). Thus, the tumor was classified as a poorly differentiated primary adenocarcinoma of the EGJ with central necrosis, in the absence of Barrett’s esophagus, without invasion of any of the 61 excised lymph nodes (LN) or any vascular invasion, which classified the tumor as an IIA (T3N0M0) stage, according to the seventh TNM classification system19. According to the decision of our institution’s multidisciplinary tumor board, the patient was advised not to receive any kind of adjuvant treatment and was thereafter followed-up with upper gastrointestinal endoscopy and CT scans every six months. 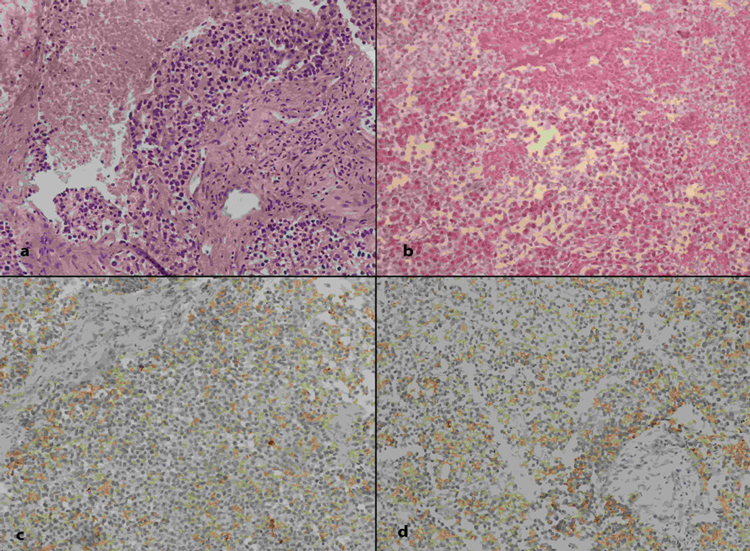 Figure 1: Hematoxylin and Eosin stain a) of the esophagogastric junction (EGJ) tumor indicating the presence of a poorly differentiated adenocarcinoma with extensive necrosis (x 25), and b) of the percutaneous biopsy of the liver mass demonstrating the presence of small cells, with high nuclei/cytoplasm ratio and extensive necrosis (x 25). c) and d) depict the immunohistochemical positivity of both EGJ tumor and liver mass respectively for alpha fetoprotein (alpha fetoprotein, x 25 and x 25, respectively).

Eleven months postoperatively, with the follow-up upper gastrointestinal endoscopy and CT study on the sixth postoperative month being negative for the presence of any local or distant tumor recurrence (Figure 2), the patient complained of a vague pain at the right hypochondrium. He was subjected to a CT of the thorax and abdomen, as well as to an abdominal magnetic resonance imaging (MRI), which revealed the presence of a bulky mass in the right lobe of the liver, associated with an elevated serum AFP level of 631 ng/ml, without other suspicious findings. The patient also underwent a positron emission tomography (PET) scan, which demonstrated a hypermetabolic area at the liver’s right lobe, without other suspicious findings (Figure 3). However, it was still unclear if that particular mass was a novel tumor of the hepatic origin or metastatic disease of esophageal origin (Figure 3).

Figure 2: Axial computed tomography images of the thorax and abdomen on the 6th postoperative month, depicting a) the esophagogastric anastomosis within the mediastinum, without any local or b) distant recurrence.

Figure 3: Axial, corresponding images of computed tomography (a), magnetic resonance imaging (b), and positron emission tomography (c) scans on the 11th postoperative month, demonstrating a bulky mass within the right lobe of the liver.

Following these, the liver mass was subjected to a percutaneous fine needle biopsy. The histologic examination revealed the presence of small cells with a high nuclei/cytoplasm ratio and extensive necrosis, and immunohistochemical positivity for AFP, findings suggesting a hepatoid adenocarcinoma (HAC) (Figure 1).

Considering these emerging data, the surgical specimen was re-evaluated. It was found to be immunohistochemically positive for glypican-3, cytokeratin (CK) 8, and CK 18 as well as for the expression of AFP, whereas it was immunohistochemically negative for the expression of chromogranin A and HepPar-1 (Figure 1). Thus, the histopathologic report was revised, and the tumor was re-defined as a combination of primary adenocarcinoma and HAC of the EGJ, with the metachronous liver lesion being a metastatic HAC of EGJ origin.

Given the absence of other distant metastases and the large size of the liver lesion, our institution’s multidisciplinary tumor board suggested the implementation of three sessions of trans-arterial chemoembolization (TACE) of the liver mass, as a bridge therapy towards a possible hepatectomy. The patient underwent two sessions of TACE with the use of 5-FU, Doxorubicin combined with drug-eluting beads of a size 100-300 μm and 300-600 μm (Figure 4), which resulted in a slight decrease of the size of the liver mass following the second TACE session (Figure 5). Despite this fact and during the waiting period for the third session of TACE, the patient developed inferior vena cava and portal vein thrombosis due to tumor infiltration, which resulted in hepatic insufficiency and, unfortunately, twenty days later succumbed. 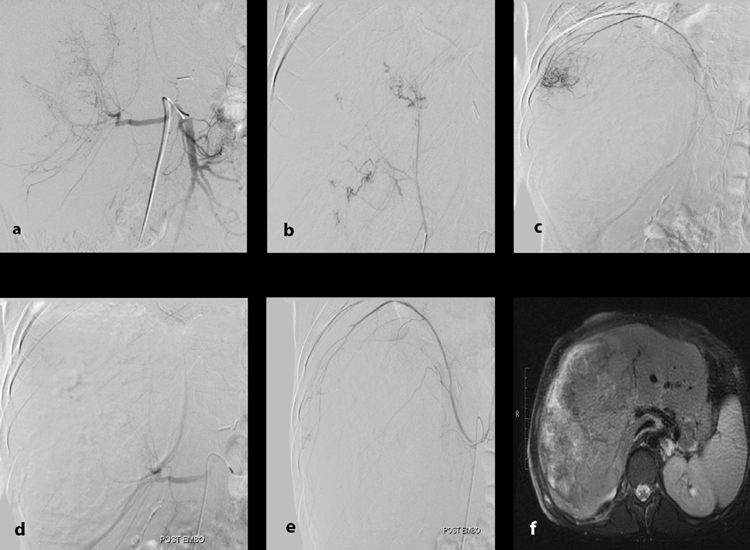 An increasing number of AFP-producing adenocarcinomas of the gastrointestinal tract have been reported in the literature in recent years11,20. The vast majority of these tumors are of gastric origin1,2, whereas esophageal tumors are relatively few3-17. AFP-producing adenocarcinomas in the stomach are usually discovered at an advanced stage, with liver and distant metastases, and subsequently with a poor prognosis compared with ordinary gastric adenocarcinomas2,21. They seem to be more frequently located in the stomach than the esophagus, but both are extremely rare.

Primary HAC is a subtype of AFP-producing adenocarcinomas, and may be encountered either as a pure form or in conjunction with an ordinary adenocarcinoma of the gastrointestinal tract. They most commonly develop in the stomach and may share a common origin with coexistent tubular adenocarcinoma, without any helpful markers for identifying specific subgroups of patients who are at an increased risk for neoplasia22. Microscopic vascular invasion and liver metastasis are common in gastric HACs, leading to a poor prognosis18,23. Their five-year overall survival rate has been reported to be as low as 9 %18, significantly lower than that of HCCs (46 %)24 or conventional gastric adenocarcinomas (44 %)18.

Up to now, only 16 cases of AFP-producing esophageal adenocarcinomas, including the present case, have been reported. The mean age of presentation is approximately 59 (range: 35-83) years, with a male gender predominance (Table 1). They are usually accompanied by an elevated AFP serum value (median value: 1066 ng/ml) (Table 1). However, normal AFP serum values cannot preclude their diagnosis, as demonstrated by the study published by Tanigawa et al7 as well as the present case. As in our case, most patients with primary esophageal HAC usually present with constitutional symptoms, including decreased appetite, fatigue, and weight loss. All reported cases have the tumor location in common; the distal part of the esophagus in proximity to the EGJ appears to be the sole origin of esophageal HAC. They most commonly metastasize to the liver, LN, and lungs, and unlike this case, they are usually associated with Barrett’s esophagus. Despite their multimodal treatment, with surgical resection reserved for localized disease, with or without chemotherapy, their prognosis is unfavorable, compared with the ordinary adenocarcinomas of the EGJ, with a median survival of four months (Table 1).

The histologic appearance of HAC resembles that of HCC, rendering its distinction extremely difficult when metastasized to the liver. Their distinction is crucial, as HAC has a more aggressive course and limited therapeutic options11,25. The immunohistochemical markers most commonly used in current clinical practice, such as hepatocyte paraﬃn-1 (HepPar-1)26, glypican-327, arginase-1 (ARG1)28, and polyclonal carcinoembryonic antigen29, are not entirely specific to HCCs. However, the study published by Fujikura et al investigated the role of two novel immunohistochemical markers for the discrimination of HCC from HAC, the bile salt export pump (BSEP) and multidrug-resistance protein 3 (MDR3), both members of the ATP-binding cassette (ABC) transporter family. They demonstrated that BSEP and MDR3 are 80-90 % sensitive and nearly 100 % speciﬁc for HCCs, and may therefore efficiently discriminate HCC from HAC30.

In conclusion, this is the younger patient case to be reported so far and the second case in the literature, suffering from a combination of primary adenocarcinoma and HAC of the EGJ associated with normal AFP serum levels. Some would argue that routine pathologic and immunohistochemical examination of primary EGJ tumors for a hepatoid component would be appropriate. However, this argument remains debatable, as their rare incidence does not favor this approach as cost-beneficial.  Exceptions to this approach might be either cases associated with elevated serum AFP levels or poorly differentiated tumors with histologic characteristics partially resembling those of HAC, which yield a high level of suspicion for primary esophageal HAC existence. Regarding the latter case, it is the authors’ belief that these tumors should also be examined for the presence or not of a neuroendocrine tumor component. This scenario is extremely important in terms of timely treatment in poorly differentiated adenocarcinomas of the EGJ that may obscure a HAC component. In such cases, HACs will not be usually diagnosed at the time of the initial pathologic evaluation and considering their more aggressive course, compared with the respective ordinary adenocarcinomas of the EGJ as well as their limited therapeutic options and response9, implementation of a timely and aggressive multimodal treatment strategy is of utmost importance.

The authors ought a great thank you to the Associate Professor of Pathology Dr. Georgios Agrogiannis MD PhD, for the interpretation and review of the pathologic specimens and the images obtained by them.

Authors declare no conflict of interest regarding the present manuscript.