Tonsilloliths are calcifications of various sizes that are formed in the tonsillar crypts or around them1. Although tonsil stones are considered as a result of recurrent tonsillitis, the exact pathogenesis remains unknown2. Small tonsil calculi are frequently asymptomatic and are discovered incidentally through routine radiography of the head and neck region, whereas large calcifications are rare and may, occasionally, cause several symptoms, especially in cases of inflammation1.

A 20-year-old female was referred to the Emergency Otolaryngology Department suffering from fever, dysphagia, odynophagia, and right otalgia for the past three days. The patient had a clear medical history, no reported allergies, no reported surgical procedures in the past, and she was a smoker (20 cigarettes per day). Clinical examination of the oropharynx revealed unilateral swelling of the right tonsillar fossa, causing uvula displacement from the midline position accompanied by a slightly reduced opening of the mouth. She was initially considered a possible case of peritonsillar abscess, but the diagnostic needle aspiration showed the content to be solid hard. Laboratory testing showed a high white blood cell count with neutrophilia and high C-reactive protein (17 mg/l). All the other blood serum tests were unremarkable.

The young woman was admitted to the hospital, administered intravenously antibiotic therapy (ampicillin-sulbactam and clindamycin), and soon exhibited clinical improvement. Routine lateral soft tissue radiograph of the neck revealed the presence of a large calcified mass 23 x 22 mm in the oropharynx (Figure 1A). Oropharyngeal examination revealed a large tonsillolith, after partial necrosis of the overlying tissues (Figure 1B). An attempt to remove the tonsillolith under local anesthesia was unsuccessful. A tonsillectomy a chaud was offered to the patient, but she refused it as she felt much better and preferred to undergo routine tonsillectomy. She was discharged after four days in excellent general condition and was scheduled for tonsillectomy, which was performed successfully two months later. 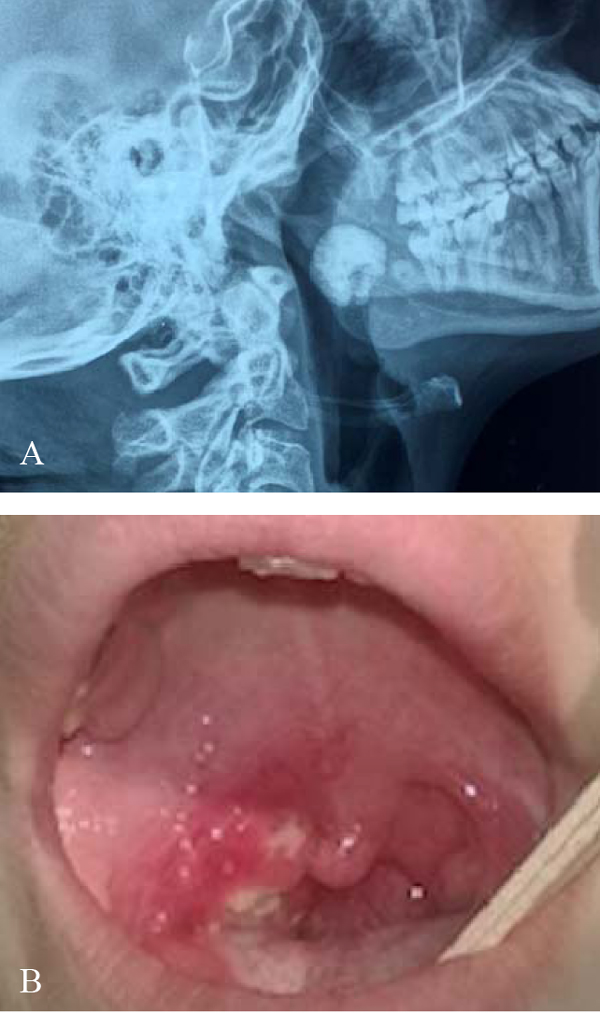 Figure 1: A) Lateral soft tissue radiograph of the neck showing a large well-defined calcified mass in the oropharynx. B) Clinical image of the oropharyngeal examination showing unilateral swelling of the right tonsil.

Tonsil stones consist of phosphate and/or carbonated salts of calcium as well as a protein matrix3. Tonsilloliths are formed from calcified accumulates of food, cellular debris, and microorganism aggregates in the crypts of palatine tonsils2. Recurrent inflammation may result in the calculi formation3.

Differential diagnosis should include neoplasia (solid, immobile, and often painful), peritonsillar abscess, foreign bodies, ectopic bone or cartilage, lymph nodes, calcification of the stylohyoid ligament due to Eagle’s syndrome, tonsil hypertrophy, and granulomatous complications1. A detailed clinical examination, imaging studies, and histological investigation are necessary to establish the diagnosis. The treatment options include tonsil stone removal and tonsillectomy, which is considered as the definite treatment1,2.