Background: Globally, the term pilonidal sinus disease (PSD) is most frequently used for lesions in the sacrococcygeal region. The inter-mammary sulcus is a rare location for pilonidal sinus abscesses. Our study examined the causes of inter-mammary PSD (IMPSD), which is rarely seen in the literature and our treatment approach.

Material: We retrospectively analyzed patients referred to our hospital’s general surgery clinic between 2012 and 2018. Twelve patients were operated on for IMPSD during these six years. An excision, including all sinus openings, was planned, and a D-shaped incision was performed. Sinus openings and tracts underlying the skin were excised in toto. Subcutaneous flaps were created to shift the incision from the midline plane to reduce the recurrence rate. The minimum duration for the follow-up was 24 months. Eight patients were suffering from polycystic ovary syndrome. Progesterone and testosterone levels of the patients were normal. Prior studies evaluating PSD and hormone levels of female patients showed no correlation.

Conclusions: IMPSD is a disease that should be kept in mind if induration and abscess in the inter-mammary region are present. The risk of recurrence is high if no proper excision is planned. A D-shaped incision including all sinus tract openings and a midline shift prevented our series’ possible recurrences. HIPPOKRATIA 2020, 24(2): 84-87.

Pilonidal sinus disease (PSD) is a disease generally seen in young males originating from hair follicles. It is usually localized in areas with dense hair, such as the sacrococcygeal region. It was first described by Herbert Mayo back in 1833 as a sinus opening with hair inside it1. Even though the disease was first described nearly 200 years ago, its etiology remains unclear. Especially authors conducting human embryogenic studies throughout the last decade suggested that the lesion might be originated in the developmental stage. However, many studies are recognizing that the disease is an acquired one. Both theories accept an inflammation developing in the hair-bearing skin tissue followed by a bacterial super-infection2. Reports indicate the incidence of PSD in the population as 26/100,000 people. Predisposing factors are pilosity, male gender, younger age, increased sitting posture duration, increased skin folds, and lack of personal hygiene3-5.

Nearly half of the PSD patients present to clinicians with the presence of an abscess; 66 % complain of stinking discharge, 55% of swelling and erythema, and 35 % of pain6,7. Regardless of the hospital admission reason, acute abscess presence is the most important indication for surgical drainage, followed by antibiotic therapy as the first treatment for acute cases. Surgery is the main treatment modality for chronic PSD, despite several other treatment options. Excision and primary closure, wide excision and healing by secondary intention, and asymmetric incision and flap repair are the most common surgical options8.

Globally, the term PSD is mostly used for lesions developing in the sacrococcygeal region. Axilla, umbilicus, ear, nose, hand fingers, and foot toes are other possible sites for the disease. It is a well-known occupational disease amongst barbers and people using instruments for animal husbandry. The inter-mammary sulcus is a rare location for the pilonidal sinus abscess4,5,9.

Generally, there are single case reports and very few series in the literature on inter-mammary PSD (IMPSD), and all reported patients are women. IMPSD is especially seen in the twenties and thirties, and the primary reason for admission to the hospital is the related pain. Large breasts and hyperpigmentation increase the risk of  IMPSD10-12.

Our study aims to examine the causes of IMPSD and our treatment approach, utilizing the flap technique, which we frequently use on the sacrococcygeal pilonidal sinus disease (SPSD), and shared its results.

We retrospectively analyzed patients referred to our hospital’s general surgery unit between 2012 and 2018, complaining of pain, erythema, or swelling at the inter-mammary area. Patients who underwent any surgical intervention due to IMPSD were selected for further investigation, and their data were evaluated. Age, gender, weight, height, body mass index (BMI), breast dimensions, medical background, comorbidities, duration of the disease, number of abscesses drained, family medical background, presence of hypertrichosis, presence of hypertrichosis in family, hormonal pathologies, ovarian pathologies, progesterone and testosterone levels, number of sinus tracts, white blood cell counts, glucose levels, duration of operation, follow-up period, and recurrence of the disease were taken into consideration.

A total of twelve patients were operated on for IMPSD during these six years by a single surgeon using the same technique under sedoanalgesia. All twelve patients included in this study were female. The demographic data, operation information, blood values, and hormone levels of the patients are shown in Table 1.

Patients received the standards of care according to our institutional protocols during their hospitalization, and informed consent was obtained from all patients included in this series. Before the incision, five ml of methylene blue dye was injected through the sinus orifice. A D-shaped incision that included all sinus orifices was performed in the inter-mammary region (Figure 1A). The excised skin included all tracts stained by the blue dye and the cystic area. Subcutaneous flaps were mobilized using cautery over the fascia, and these flaps were raised to shift the incision from the midline plane to reduce the recurrence rate. After meticulous hemostasis, the subcutaneous tissues were approximated with 3/0 absorbable multifilament sutures, and non-absorbent monofilament sutures were preferred for the skin incision. No drains were placed, and the excised tissues were sent to pathology for examination (Figure 1B). 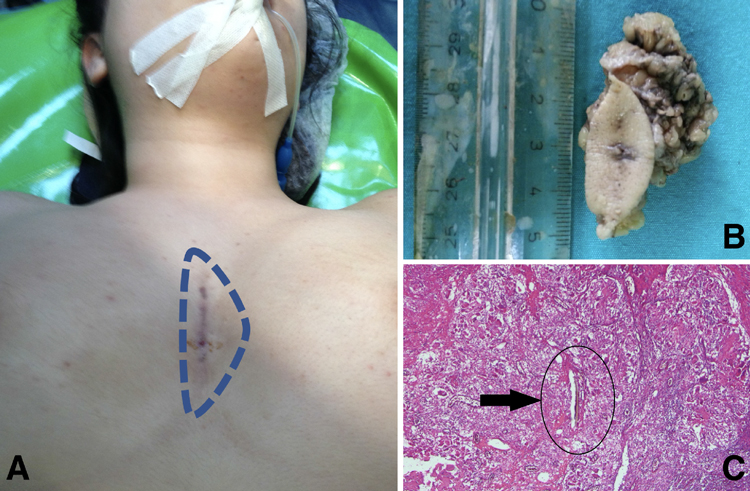 Figure 1: A) Sinus is seen in the inter-mammary region. The D-shaped incision was marked to include the sinus orifice. B) Excised tissue following the D-shaped incision. The sinus on the skin appearing to be 3 cm long, but subcutaneous tissue excised was 5 cm. C) Pathological examination of the specimen. Free hair shafts (arrow) seen within the inflammatory reaction.

The average duration for the operation was 26.58 ± 4.06 (range: 20-35) minutes. Pathological examinations of the specimens confirmed that lesions were pilonidal sinuses. Microscopic evaluation revealed hair follicles within the extracted tissues (Figure 1C). All patients were fed six hours after the operation and discharged on the first postoperative day without any complications. Patients attended the ward on the fifth and tenth postoperative days for wound care and had planned appointments for a control examination (check for recurrence) on the 6th, 12nd and 24th months. In our series, the minimum duration of follow-up was 24 months. Recurrence rate and complications were observed during this period. Follow-up phone calls were made for those patients who missed their outpatient appointment. None of the patients suffered a disease recurrence or any complications during the 24 months of follow-up.

Pathologies causing pilonidal sinuses have been thoroughly discussed for many years. It is thought to originate from neural canal residues or ectoderm. PSD is frequently located at the sacrococcygeal region and less often at other locations, including the inter-mammary sulcus. In the latter location, most IMPSD cases become evident as induration in the inter-mammary area, abscess, or a sinus opening with spontaneous discharge. While induration and pain were the most common hospital admission symptoms, 83 % of our cases complained of spontaneous discharge (n =10). The symptoms leading IMPSD patients to hospital admission were similar to SPSD complaints2-4. All patients in our series reported to had attended hospital and underwent abscess drainage procedures at least twice. Patients underestimating their symptoms and inexperienced physicians not properly assessing PSD are considered the most important reasons for repetitive hospital admissions. Like SPSD, if surgical excision of IMPSD does not include all sinus tracts, it results in a high recurrence rate.

Only two patients in our series had a BMI of over 30. We could not find a significant correlation between obesity and IMPSD. Obesity is not reported as a possible risk factor in the literature; however, several studies indicate obesity increases the IMPSD incidence13,14.

Only two patients had another family member suffering from IMPSD. The presence of hypertrichosis might be the reason for this incidence. Moreover, family members suffering from a rare disease such as IMPSD suggests the possibility of been hereditary16.

It was remarkable that all our patients had large breast sizes, which suggests that large breasts might contribute to the development of IMPSD. Especially in the presence of hypertrichosis, patients with sizable breasts have an increased risk of hair entrapment in the inter-mammary sulcus when hair shedding occurs.

Regarding the evaluation of patients’ leukocyte counts, only six had minimal leukocytosis, probably due to local abscesses’ presence upon their hospital admission. Only one had an increased blood glucose level (106 mg/dL), and none was diagnosed with diabetes mellitus (DM). The patient with the increased blood glucose was examined postoperatively, and no evidence supporting the diagnosis of DM was found.

A worth mentioning finding in the current series was the fact that eight women suffered from polycystic ovary syndrome (PCOS), which, interestingly, is a possible reason for the hypertrichosis17,18. Progesterone and testosterone levels of the patients were normal. Prior studies evaluating SPSD showed no correlation with the patients’ hormone levels. Our findings in agreement with literature recorded no significant relationship between IMPSD and progesterone and testosterone levels15,19.

In conclusion, IMPSD is a disease that should be kept in mind if induration and abscess in the inter-mammary region are present. Sinus openings must be thoroughly examined, especially if the patient has large breasts, lacks breastfeeding history, suffers from hypertrichosis, or disease with an increased risk of hypertrichosis. Patients with sinus orifices should be regarded as IMPSD and a proper excision planned to avoid recurrence risk. A D-shaped incision including all sinus tract openings and a midline shift prevented our series’s possible recurrences.