Methods: We retrospectively analyzed data from patients who underwent AC surgery from January 2014 to August 2019. Collected information included age, gender, length of stay (LOS), pathology [as CC or uncomplicated (UCC)], albumin, C-reactive protein (CRP), white blood cells (WBC), and neutrophils (NEU) results. The lymphocyte-to-monocyte ratio (LMR) was calculated. The GPS was calculated using CRP and albumin levels, and mSIS was calculated using LMR and albumin levels, and it was scored from 0 to 2.

Conclusion: CRP, WBC, and NEU could be used to predict presence of CC. The combination of CRP or LMR with albumin could be a positive but weak predictor of CC, and it is quick, easy to use, and reliable. HIPPOKRATIA 2020, 24(1): 15-20.

The prevalence of gallstone complaints was reported to be as high as 15-20 % at the general population; of these patients 2 % are admitted to hospital annually, and 20 % of them have acute cholecystitis (AC)1. Complicated cholecystitis (CC) (including necrotizing, gangrenous, emphysematous, or perforated cholecystitis) is the severe form of AC. CC accounts for 2-30 % of the AC, and the mortality rate varies from 0.9 to 17.8 %2-4. Early detection and treatment is important with CC to prevent morbidity and mortality.

Treatment for AC is considered and selected according to severity. Uncomplicated AC can be suitable for medical treatment, while complicated AC requires surgical or radiologic intervention. The Tokyo Guidelines (TG; TG13 and TG18 updates in years 2013 and 2018, respectively) or the American Association of the Surgery for Trauma (AAST) scales are the most frequently used methods to evaluate AC severity5,6. However, TG shows the clinical severity of AC, but not the surgical severity, and AAST scales can be used after surgery. Additionally, C-reactive protein (CRP), white blood cells (WBC), neutrophil percentage (NEU%), liver function tests, hemoglobin (Hb), platelet (PLT), and procalcitonin (PCT) are used to predict the severity of AC, but different sensitivities and specificities have been reported7-11. Predicting CC severity can be challenging due to laboratory or imaging results in these patients. Furthermore, some of the most frequently used inflammatory biomarkers are not adequate to predict and classify CC severity.

A low albumin level is an indicator of poor nutrition, immunity, and prognosis. The combination of albumin and inflammatory markers is a good predictor of disease severity, prognosis, or survival in CC. Hypoalbuminemia and high CRP [Glasgow prognostic score (GPS)] and hypoalbuminemia with a lower lymphocyte-to-monocyte ratio (LMR) [systemic inflammation score (SIS)] were used to predict the prognosis and survival of some cancer patients. GPS and SIS can be used to predict the severity of an inflammatory disease such as AC12-16. The aim of this study was to evaluate GPS and modified systemic inflammation scores (mSIS) for predicting presence of CC.

After receiving institutional approval from the Ethics Committee at Health Science University, Okmeydanı Training and Research Hospital Ethics Committee (decision No 1209, date: 02/04/2019), were retrospectively evaluated the records of all patients who underwent surgery for AC from January 2015 to August 2019. Patients treated conservatively and those who underwent surgery for malignant/premalignant pathology were excluded from the study. Patient age, gender, length of hospital stay (LOS), surgery type, comorbidities, survival, pathology [uncomplicated cholecystitis (UCC) or CC], liver function tests, albumin (g/dL), CRP (mg/L), and hemogram results were retrospectively evaluated. Type of surgery was evaluated as laparoscopic, open, or conversion to open from laparoscopic. 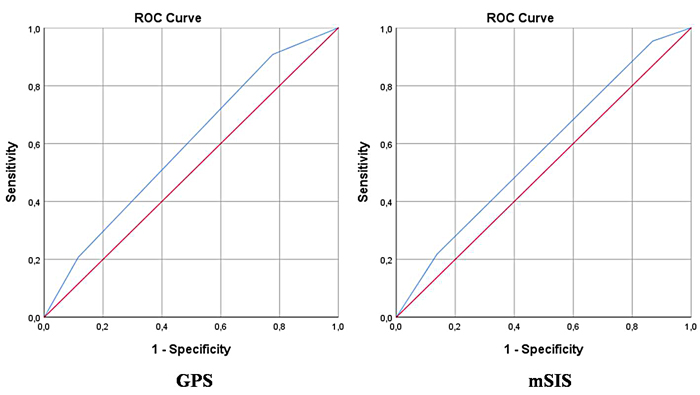 Predicting presence of CC is important to determine the patient’s management strategy upon admission and decrease morbidity and mortality. Some grading systems such as TG or AAST scales were developed to predict the grade, but they did not fully show AC’s surgical severity, such as development of CC. AC is an inflammatory disease of the gallbladder, and liver enzyme levels and/or inflammatory parameters are affected by inflammation. However, the increase in the severity of AC is not always correlated with variations in these parameters. WBC >18,000 μ/L indicates a moderate disease using the TG18, but cholecystitis can be complicated even at lower WBC levels or if other inflammatory markers levels are affected. Laparoscopic cholecystectomy is generally recommended for AC, except under certain conditions. However, surgery cannot always be performed promptly due to patients’ comorbidities or the adverse effect in operating schedules of weekends, holidays, or pandemics that interfere with performing in time investigative imaging studies. To predict the presence of CC, a fast, easily applicable, and reliable predictor is required.

Male gender and age >65 years are reported to be risk factors for development of CC1,3. A recent study showed that CC patients were most often male (57.4 %), but this difference was not statistically significant. In our study, the mean age of CC patients was 53.40 ± 13.76 years, which is younger than reported in other studies.

CRP is a positive and albumin is negative acute-phase reactant proteins that are affected by inflammation and its severity. GPS is calculated using CRP and albumin levels. GPS predicts the prognosis in patients with lung, ovarian, colorectal, renal cancer, and hepatocellular carcinoma. CRP/albumin was reported to have a predictive effect on some inflammatory diseases such as ulcerative colitis19,20. Sato et al evaluated GPS and other inflammation-based markers for AC according to the TG, and suggested that they can be used as predictors for the severity of AC together with TG1314. However, Grade I (TG) AC pathology can be reported as 22 % necrotizing and 20 % gangrenous cholecystitis. TG13 or TG18 could predict the clinical severity, but they are inadequate for predicting AC’s surgical severity5. In our study, the GPS score was higher for CC compared to UCC patients, and the difference was statistically significant, which was in contrast to CRP and albumin. A higher GPS could be a positive but weak predictor of CC presence.

LMR alone and SIS (LMR and albumin) were reported to be prognostic factors for survival and mortality in some cancer patients, and they were also considered as diagnostic factors for infectious diseases such as pneumonia21-23. In our study, the mSIS score was significantly higher, and LMR was significantly lower in CC compared to UCC patients. A higher mSIS could be a positive but weak predictor of CC presence.

The limitations of our study were its retrospective nature, derived from a single institution and for a limited period, and small sample that may explain the inability to reach statistical significance for good correlation of GPS and mSIS with CC.

In conclusion, CC is a severe form of AC, and it has a higher morbidity and mortality rate than AC. CRP >103.54 mg/L, WBC >15.18 ×106/μL, and NEU >11.79 ×103/μL can be used to predict CC. The combination of CRP or LMR and albumin, which were used to calculate GPS and mSIS, are the inflammation markers. GPS and mSIS are quick, easy to use, and reliable, and they could be positive but weak predictors of CC presence.

All authors declare no conflict of interest.