Introduction: The different degrees of adiponectin/insulin sensitivity and dysfunctional adipose tissue lead to the development of hypertension (HT). This study aimed to determine adiponectin (AD) concentration in patients with metabolic syndrome (MetS) and high-normal blood pressure or hypertension and to investigate the importance of Homeostatic Model Assessment-AD (HOMA-AD) index in assessing adiponectin/insulin resistance in hypertension.

Conclusions: Hypoadiponectinemia is associated with hypertension, especially in the early stages of the disease. The serum AD levels and HOMA-AD index may be useful markers for identifying patients at risk for high-normal blood pressure and hypertension. HIPPOKRATIA 2020, 24(1): 3-7.

Hypertension (HT) is associated with significant differences in adipose tissue metabolism, with an increase in total and central obesity and a higher risk of cardiovascular events. Early diagnosis of high blood pressure (BP) is a crucial factor for the prevention of cardiovascular events. Nowadays, the prevalence of metabolic syndrome (MetS) is reaching global pandemic proportion1. Adipose tissue is also able to secrete a hormone with a particularly anti-inflammatory, anti-atherogenic, antidiabetic properties called adiponectin (AD)2. AD is involved in the regulation of insulin sensitivity, glucose metabolism via the AdipoR1/R2 receptors promoting fatty-acid oxidation, glucose uptake, and increasing nitrogen monoxide (NO) concentration3. Its concentration is one of the most abundant compared to various hormones and cytokines, including leptin, insulin, and interleukins. Circulating AD concentration is controlled by genetic factors (46 %) and remains relatively constant4. The magnitude of the day/night variation in high-molecular-weight (HMW) AD is according to changes in insulin sensitivity. However, the underlying mechanisms are not well understood.

Etiopathophysiology association between levels of AD and HT in MetS is very complex, including many biological mechanisms: increased insulin, AD and leptin resistance, stimulation of the sympathetic nervous system, as well as the rennin-angiotensin system, low-grade chronic inflammation in adipose and vascular tissue.

During the past years, several studies have described an inverse relationship between AD and HT5,6. Still, none of these studies evaluated the clinical significance and influence of insulin/adiponectin resistance parameters, AD and Homeostatic Model Assessment-AD (HOMA-AD), on BP’s values in patients with MetS.

Therefore, the present study aimed to determine AD concentration in patients with MetS and high-normal BP or hypertension and to investigate the importance of the HOMA-AD index in assessing adiponectin/insulin resistance in hypertension.

Between February and December 2013, a total of 248 overweight or obese patients from the Nis area, attended the Center for Hypertension of the Institute for Treatment and Rehabilitation “Niska Banja”, Niska Banja and the Center for Molecular Medicine and Stem Cell Research of the Faculty of Medical Sciences, University of Kragujevac, Serbia. Out of them, 100 patients (according to sample size calculation) who were diagnosed with MetS after measuring anthropometric characteristics and biochemical parameters, ergometric testing, and cardiologist examination, were enrolled in the study. MetS was diagnosed according to the International Diabetes Federation (IDF) definition7, which includes central obesity plus any two of four additional factors: i) raised triglycerides and reduced high-density lipoprotein (HDL) cholesterol, or ii) specific treatment for these lipid abnormalities, iii) elevated blood pressure (BP ≥130/85 mmHg) or treatment of previously diagnosed hypertension, and iv) raised fasting plasma glucose. We excluded subjects who had liver or renal diseases, inflammatory diseases, any form of vascular or endocrine disease (diabetes mellitus), or any other form of drug treatment with possible effects on metabolism except antihypertensive therapy at the beginning of this study. Study sample size was calculated at n =150 subjects (three groups x 50), with condition α =0.05, 95 % confidence interval, standard effect size E/S =0.57, and power studies P =0.80 (program G*Power3.0-Faul 2016). The Ethics Committee of the Institute for Treatment and Rehabilitation “Niska Banja” approved the study (decision No: 03-3048/1, date: 1/4/2010). Each patient provided written informed consent after reading the study protocol.

The study included 150 subjects; 76 men and 74 women, with an average age of 53.89 ± 14.30 years, consisting of 100 patients with MetS, and 50 healthy subjects without MetS (control group, n =50). The patients with MetS were further divided into two groups according to their BP: MetS with high-normal BP (MetS+high-normal BP, n =50), and MetS with HT (MetS +HT, n =50). The control group was constituted from healthy females and males who were age-matched with the MetS group.

The study was designed as a cross-sectional study. In the investigated sample, there was a homogeneous distribution of subjects according to the following characteristics: gender, age, and duration of arterial HT. All patients receiving antihypertensive treatment were on a particular fixed combination of antihypertensive drugs with the same mechanism of action (ACE-inhibitor and diuretic) to exclude a possible differential impact of antihypertensive therapy on the level of AD.

For all enrolled subjects, their anthropometric characteristics were measured: body mass (kg), body height (cm), waist circumference (cm), and the body mass index (BMI) was calculated. BP values were defined by the arithmetic mean of three ambulatory measurements. Hypertension was diagnosed according to the current European Society of Cardiology/European Society of Hypertension (ESC/ESH) guidelines (high-normal for BP ≥130-139/85-89 mmHg, and HT for BP ≥140/90 mmHg, or receiving antihypertensive treatment)8.

All analyzes were performed with the IBM SPSS Statistics for Windows, Version 20.0 (IBM Corp., Armonk, NY, USA) using descriptive and analytical methods. Baseline characteristics are presented as frequencies or means with standard deviation. The Kolmogorov-Smirnov test was utilized to check the normality of the distribution of the variables. The chi-square test was used to analyze the differences between categorical data. The comparison of the means of AD level, BP, and parameters of MetS among the groups were determined by analysis of variance, while to examine the correlation of AD levels with parameters of MetS, Pearson’s correlation analysis was utilized. AD level and HOMA-AD value for the prediction of high-normal BP and HT were assessed by a receiver operating characteristic (ROC) curve. All statistical analyses were two-tailed, and the statistical significance level was set at p <0.05. 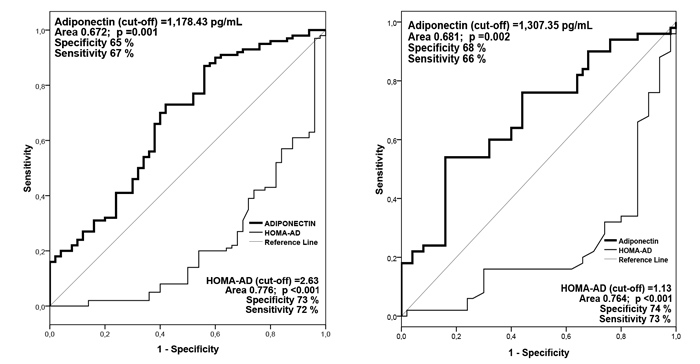 A more comprehensive understanding of MetS and the complex relationship between HT and insulin resistance, as well as using sensitive markers of these entities is particularly important in the light of the increasing prevalence of cardiovascular events.

Variability in serum AD concentration is detectable in prediabetic states, and may reflect adipose tissue dysfunction in early phases in metabolic disorders4,14. Consistently with previous reports15, we have also determined lower serum levels of AD in men than in women, which might be due to the down-regulation effect of testosterone and the effects of female steroid hormones.

As few previous studies showed11,16, we demonstrated that the plasma concentration of AD was significantly correlated with most components of MetS. We showed that there was significant but weak negative correlation with BMI, FPG, HOMA-IR, and moderately negative correlation with BP and DBP. Also, in the present study, lower AD and higher BP and/or insulin resistance were also significantly associated with increased prevalence of HT in patients with MetS. Abdominal fat tissue is mostly composed of large adipocytes, which produce pro-inflammatory cytokines and low levels of anti-inflammatory factors, such as AD, maintaining the vicious circle of chronic inflammation and insulin resistance17. Decreased circulatory AD level and AdipoR1/R2 expression subsequently reduce AD sensitivity and lead to both insulin resistance and the occurrence of metabolic and vascular disorders in hypertension18. The precise mechanism of how hypoadiponectinemia reduces expression and activity of adiponectin receptor and damages signalization on the insulin signaling pathway is not fully understood. However, there are several mechanisms of this negative correlation: increased Tumour Necrosis Factor alpha (TNF-α)19, down-regulation of genes peroxisome proliferator-activated receptor (PPAR), and a disorder of all the signaling molecules such as AMP-activated protein kinase (AMPK)20.

Results by Ding et al19 suggested that HOMA-AD is a potent index of each component of MetS, as well as the ratio of AD/insulin sensitivity, central fat distribution, and fat oxidation. Modified HOMA-AD is able to reflect metabolic disbalance and differentiate patients and controls from the degree of adiposity and insulin resistance in hypertension, more precisely than the existing HOMA10,13.

A significant meta-analysis by Kim et al21, which included 48 studies with a total of 17,598 subjects showed that lower plasma AD was associated significantly with a high risk of hypertension. In the current study, in all examined groups, results showed a moderately negative correlation of AD serum levels and BP values, which corresponds to those reported by other research groups5,6,21. Baden et al22 suggested that the concentration of AD serum probably has significantly negative correlations compared to both systolic and diastolic BP among healthy people. The current is the first study that showed a strong positive relation between HOMA-AD and blood pressure values in patients with MetS. Our results showed that decreased HOMA-IR, HOMA-AD and hyperadiponectinemia were strongly associated with a low risk of hypertension in patients with MetS. There are a few possible explanations of AD’s influence on blood pressure: through stimulation of NO production in vascular endothelial, through an increase in the circulating endothelial progenitor cells, through suppression of angiotensin II (i.e., whole renin-angiotensin axis), and through regulation of PPAR activity in the heart23. Furthermore, AD was proven to exhibit the central regulation of the blood pressure via inhibiting leptin pathways in the brain, and therefore, it affects the sympathetic system24. Additionally, it is a multifunctional molecule that protects the vessel wall in early phases of the atherosclerosis process through inhibition of neointimal, smooth muscle cell proliferation, and lipid accumulation on the vascular wall25.

AD’s antihypertensive and anti-atherogenic effects are also achieved through the reduction of arterial stiffening process and through inhibition of both procollagen type I carboxy-terminal propeptide and collagen deposition in the vascular wall25,26.

However, the results of a large study, which included a cohort of 3,640 subjects with a two-year follow-up, showed no significant correlation between these two parameters, which may be explained by an ongoing antihypertensive therapy. In our study, all patients receiving antihypertensive treatment were on a particular fixed combination of antihypertensive drugs with the same mechanism of action. This study revealed that AD concentrations were also significantly lower in patients with high-normal BP. In contrast to hypertensive patients, the patients with high-normal BP showed more substantial variations of AD and modified HOMA-AD index that could be explained due to the downregulation of insulin signaling and increased oxidative stress involved in this “early-stage disease”26. Our results are consistent with previous study10, which showed that AD levels and modified HOMA-AD index are commonly found to be significant in the development of both MetS with high-normal BP and hypertension.

Therefore, further prospective clinical studies are required to determine the potential of AD mechanisms as a therapeutic target, especially those involving increasing insulin sensitivity and lowering blood pressure. This may play a role in aiding the clinical assessment and management of MetS.

The reported results suggest that patients with MetS have low AD levels, and this hypoadiponectinemia is associated with a higher probability of hypertension. There is a strong relationship between AD levels and components of MetS. The serum AD levels and HOMA-AD index may be useful markers for identifying patients at risk of high-normal blood pressure and hypertension.

The authors declare no financial interests and/or conflict of interest related to this study.