A 45-year-old male presented to the surgical ward with intense abdominal pain and difficulty in breathing. Laboratory tests showed elevated values of leukocytes, serum, and urine amylase. Multislice computed tomography (MSCT) of the abdomen, chest, and neck was performed, which showed a fluid collection in the retroperitoneal space extending towards the posterior mediastinum (Figure 1A). The fluid collection extended paratracheal and retrotracheal at the superior mediastinum (Figure 1B) and involved the retropharyngeal and parapharyngeal spaces in the neck (Figure 1C). A surgical tracheotomy was performed, and subsequently incision and drainage of the retropharyngeal, parapharyngeal, and pretracheal spaces. The accumulated fluid was blurred with a dark grey color (Figure 1D). In the same surgery, a thoracic surgeon performed an anterolateral thoracotomy and a general surgeon upper laparotomy with fluid drainage. The subsequent biochemical analysis showed the presence of pancreatic amylase in the fluid. Post-operative MSCT did not show any fluid reaccumulation in the deep neck spaces and mediastinum. However, the patient eventually succumbed due to the complications for primary disease. 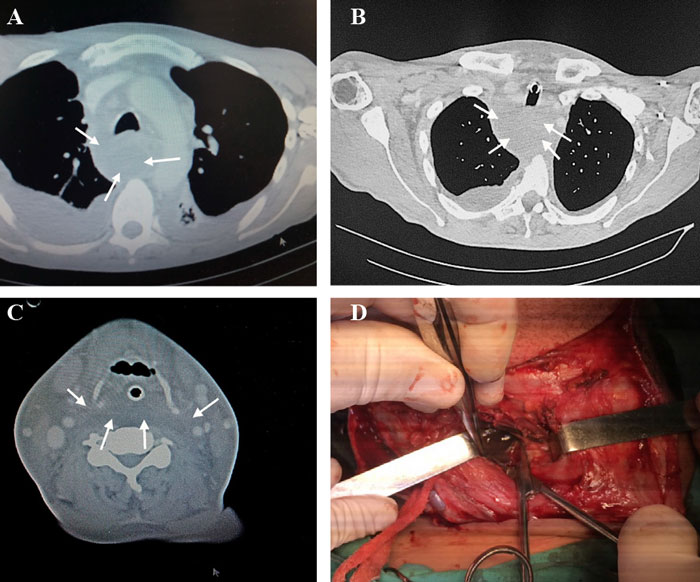 The presence of pancreatic fluid into the mediastinum is attributed to the formation of pancreatic-pleural fistula or the leakage of secretions from the pancreatic pseudocyst2,3. Regarding the possible mechanism of spread towards the mediastinum, we assumed, based on the localization of the pancreatic pseudocyst, that it extended from the peritoneal space through the esophageal hiatus into the mediastinum. Due to the patient’s prolonged supine position, deep neck spaces got involved by direct extension of the fluid from the superior mediastinum. Fluid spread into the pretracheal space, from where it advanced towards the parapharyngeal and retropharyngeal spaces.