Case description: We present a rare case of spontaneous symptomatic infrarenal aortic dissection with leading symptom right leg ischemia. We opted for abdominal surgery as the attempt for open surgical fenestration of the dissecting flap exit through right femoral access was unsuccessful. Dacron vascular prosthesis was implanted with aortoiliofemoral bypass on the right side. One of the two accessory right renal arteries was ligated, which led to a confined zone of renal ischemia. Upon follow-up, complete restoration of the renal parenchyma was observed; kidney function remained unaffected.

Isolated abdominal aortic dissection (IAAD) is an exceedingly rare condition with an estimated annual incidence of 5.1 per million population1. The typical patient is a male in his seventh decade2. The etiology can be spontaneous, iatrogenic, or traumatic or in association with some connective tissue disorders3. The symptoms are abdominal pain, back pain, chest pain, while lower limb ischemia is a rare presentation, and up to 40 % of the patients are asymptomatic4,5. IAAD is associated with a potential risk of aortic rupture, acute visceral or leg ischemia, or neurologic symptoms such as paraplegia6. The treatment of most cases is endovascular, but some patients with anatomical variations of the renal arterial vasculature are more suitable for open abdominal surgery.

A 50-year-old man presented to the emergency department with low back pain and acute right leg claudication pain at 50 m, which started one day before. His past medical history was unremarkable; he was normotensive and was not taking any medications. The physical examination was normal except for diminished femoral and distal pulses on the right side; the right leg’s sensory and motor functions were preserved. Doppler ultrasonography (DUS) showed reduced peak systolic velocities (PSV) in the right femoral artery without stenosis or dilation in the iliofemoral segment, and a dissection flap in the infrarenal aorta was visualized.

On the computed tomography angiography (CTA), the thoracic aorta and the suprarenal abdominal aorta were patent and with normal dimensions; dilation of the infrarenal aorta to 30 mm, with dissection flap with wide entry directly at the level of the left renal artery was visualized (Figure 1A). The course was spiral, and the flap was reaching distally to the bifurcation of the right common iliac artery (CIA), involving the ostium of the right external iliac artery (Figure 1B). Two additional right renal arteries (RA) and the main RA were originating from the true lumen; the lower aberrant right RA had 2 mm diameter, and the upper 3 mm (Figure 1C). The left CIA was not affected by the dissecting flap. The inferior mesenteric artery (IMA) was arising from the true lumen. Distally, both lower leg arteries were with normal contrast enhancement with no defects visualized.

After an unsuccessful attempt for fenestration of the exit of the dissecting flap through open surgical femoral access, we decided that the patient was indicated for abdominal surgery (see Discussion). The retroperitoneal cavity was accessed through median laparotomy, and all major vessels were fixed with Teflon holders. The aorta was exposed from the RA to the bifurcation; after heparinization and proximal clamping of the aorta below the RA and distal clamping of both CIA, longitudinal aortotomy was performed (Figure 2). 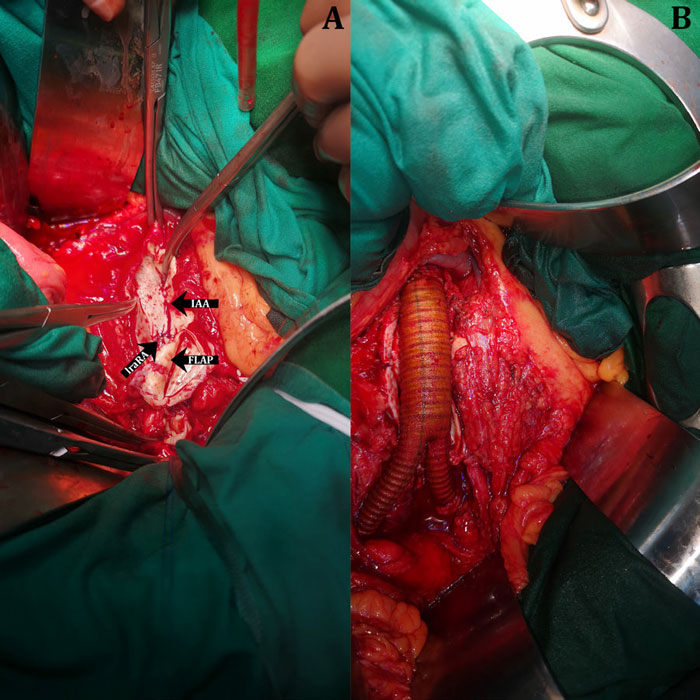 Figure 2: Intraoperative images showing A) the infrarenal abdominal aorta (IAA), the ligated lower right accessory renal artery (lraRA), and the dissecting flap which has been cut open, and B) the implanted bifurcated Dacron vascular prosthesis 20/10 mm. The proximal anastomosis was terminoterminal to the abdominal aorta directly under both main renal arteries, and the distal was end-to-end to the left common iliac artery and end-to-end to the right common femoral artery.

All lumbar arteries were ligated as well as the aberrant lower right renal artery originating at the mid abdominal aorta level because of retrograde bleeding; the IMA was also ligated. The abdominal aorta was initially clamped under the RA, but from this position, the entry could not be fixed, and reclamping between the right main RA and the upper aberrant right RA, directly below the ostium of the left renal artery was performed. The entry was fixed with single sutures. The incision was continued along the course of the right CIA, but the end of the flap was not visualized; the right CIA was ligated directly under the level of its bifurcation. The left CIA was with normal patency.

The next step was the implantation of bifurcated Dacron vascular prosthesis 20/10 mm. The proximal anastomosis was termino-terminal to the abdominal aorta directly under both main RA, and the distal was end-to-end to the left CIA and end-to-end to the right common femoral artery. The right internal iliac artery (IIA) was left without antegrade flow because we decided that the contralateral IIA would maintain sufficient hypogastric blood flow.

In the early postoperative period, the patient had a low-grade fever, but after the fifth day, he was afebrile. He had satisfactory diuresis and normal GFR, without any signs of active infection. 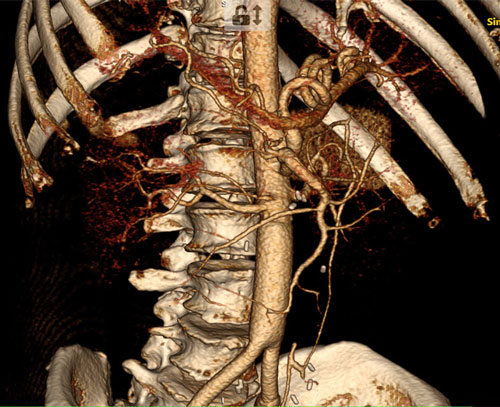 All femoral, popliteal, and dorsalis pedis pulses could be palpated. The patient was discharged ten days after the operation with oral anticoagulant therapy with vitamin K antagonist. The CTA three months after the operation confirmed that the vascular prosthesis was well-positioned and demonstrated restored right kidney parenchyma (Figure 4B). On the follow-up examinations 3, 6, and 12 months, he was symptom-free, with normal renal function. The results from the genetic tests for the most common connective tissue disorders were negative.

This case represents an infrequent manifestation of spontaneous IAAD with claudication and lower limb ischemia by a patient without risk factors. DUS examination showed reduced PSV in the right common femoral artery and dissection flap in the infrarenal aorta. In order to define the entry and the course of the flap, we performed a CTA.

The overt symptoms of the IAAD with right leg ischemia were an indication of active treatment. If a dissection is left untreated, aneurysms may form with risk for rupture or progressive stenosis leading to distal arterial insufficiency7.  The vast majority of cases of IAAD reported in the literature have been treated by endovascular techniques8. Open abdominal surgery is a unique approach, with very few cases described9,10.

The anatomy of the renal vasculature had the greatest influence on our choice of the treatment strategy. Because the dissection entry was located directly below the left main RA and the lower aberrant right RA was affected by the dissection flap, we decided that endovascular therapy would endanger renal blood flow, with a high risk of renal cortical necrosis.

By aortic dissection type III, according to the DeBakey classification (Stanford type B), we have experience only with open surgical access to the femoral arteries with fenestration of the flap and stenting of the exit, if necessary, followed by thoracic endovascular aortic repair (TEVAR).  In order to ensure blood flow to the ostia of the left RA and the aberrant upper right RA in the presented case with IAAD, a fenestrated abdominal aortic vascular graft would be required. Unfortunately, such a graft is not available at our clinic. The placement of the endovascular graft without fenestrations would not have been feasible as there was no proximal landing zone.

Bearing these considerations in mind, and the lack of any serious co-morbidities by the patient, we decided that aortoiliofemoral bypass (right common femoral artery) with fixation of the entry right below the ostium of the left RA was the most suitable therapeutic approach.

The location of the dissecting flap required selective abdominal aortic clamping above the right main RA. The left kidney perfusion was not affected, and the right kidney was partially perfused through the upper accessory right RA. The smaller lower accessory right RA was ligated, which led to confined and well-tolerated renal ischemia. According to available data, anomalous RA smaller than 2 mm in diameter can be sacrificed without a real risk of renal cortical necrosis. Arteries with larger diameter should not be ligated because otherwise, resection of the ischemic renal parenchyma may be necessary11.

We suppose that the renal infarction was responsible for the fever in the course of the early postoperative period. Thanks to the good regenerative properties of the renal parenchyma, the zone of ischemia was almost fully restored on the follow-up examinations, and the patient was symptom-free.

The presented case demonstrates that after an unsuccessful trial for fenestration, artoiliofemoral bypass is a feasible therapeutic approach for IAAD with entry directly at the left RA level, ensuring recovery of lower limb perfusion. In contrast to the endovascular approach, open surgery provides the possibility for manipulating with the level of proximal clamping balancing between fixation of the entry and preserving renal blood supply.

Authors would like to thank Eniko Enikov who edited all the images.