Background: Slipped capital femoral epiphysis (SCFE) is a condition commonly affecting adolescents. It is scarcely reported in children under ten years of age, but it can be debilitating when misdiagnosed. Our purpose was to report the incidence and treatment methods of SCFE that were applied in our institution in children under the age of ten.

Case series: We retrospectively reviewed the records of patients with SCFE treated between 2007-2018 and excluded those older than ten years old. During the study period, 46 patients (49 hips) were diagnosed with SCFE, of whom nine patients (11 hips) were children younger than ten years old. The mean age at presentation was 8.25 years. The classification was made according to the Southwick slip angle and stability of the slip. Comorbidities and body mass index (BMI) were registered. There were nine milds, one moderate, and one severe slip. All but one case were stable. All the children were above the 97th percentile BMI for age. Three patients suffered from metabolic disease. In situ Kirschner wire (K-wire) fixation was used in five hips and in situ fixation with a single partially threaded cannulated screw (CS) in six. Only two complications that required intervention were recorded, one K-wire loosening, and one K-wire mechanical failure. The mean follow-up time was 40.1 (range: 10-74) months and included eight of the nine patients. They were monitored for pain, range of motion, avascular necrosis of the femoral head, and slip progression.

Conclusion: The diagnosis of SCFE should be considered in overweight children under the age of ten, with hip-related clinical manifestations. Treatment in this young group of patients can be demanding. K-wire and partially threaded CS fixation both provide stability and accommodate the femoral head’s future growth. The use of K-wire fixation is recommended at a very young age (6-8 years of age). Orthopedic surgeons have to be aware of the increased risk of hardware-related complications when using K-wires that may have to be addressed surgically. HIPPOKRATIA 2019, 23(4): 165-168.

Slipped capital femoral epiphysis (SCFE) is a condition typically affecting adolescents, during the period of rapid growth, from 10-15 years of age. The incidence of SCFE varies from 0.33-24.58 per 100,000 adolescents, and there is heterogeneity in the prevalence of the disease among ethnicities and geographic regions1-3. The decreasing age of onset and the appearance of SCFE even in children under the age of ten years have raised concerns regarding the parameters related to its occurrence4,5. This study aimed to report the incidence of slipped capital femoral epiphysis in children under ten years old that were diagnosed and treated in our department. Also, it aimed to detect possible predisposing factors to this condition and present the challenges associated with the treatment, complications, and outcome for this young group of patients.

We retrospectively reviewed the medical records of pediatric patients diagnosed and treated for SCFE during the past ten years (2007-2018), focusing on those younger than ten years old. The data collected included age at presentation, sex, body mass index (BMI), affected side, duration of symptoms, history of a traumatic event, ability to ambulate at the time of presentation, and medical history of metabolic, endocrine, or other chronic diseases. The diagnosis was made with plain radiographs (anteroposterior and frog leg lateral views). Clinically the slips were classified as stable or unstable according to the patient’s ability to ambulate or not with or without crutches at presentation6. The severity of the slip was calculated based on the Southwick slip angle, utilizing radiographic measurements on the frog leg lateral views, and slips were designated as mild, moderate, and severe7,8. Follow-up was conducted by one senior and one junior orthopedic surgeon initially at six and 12 weeks, and subsequently at 6-month intervals. Patients were evaluated for the range of motion, presence of thigh or groin pain, and radiographs screened for avascular necrosis of the femoral head (AVN), slip progression, and hardware-related complications. Of a total of 46 patients (49 slips) that were treated from 2007 to 2018, nine patients (11 slips) were younger than ten years old. They represented 19.4 % of all treated cases. Seven were males and two females, and the mean age at presentation was 8.25 years, with the youngest patient seven years old. In the two cases of bilateral involvement, the onset of the contralateral slip occurred in less than twelve months. All cases of SCFE but one involved or affected the left hip primarily. According to national growth charts for the pediatric population, the BMI of all patients was above the 97th percentile BMI-for-age. One child was diagnosed with hypothyroidism and hyperinsulinism; one had hyperinsulinism and one hypogonadism. The remaining six were free of chronic, metabolic, or genetic disease. Clinical classification revealed ten stable hips and one unstable. The mean time from onset of symptoms to diagnosis was 2.5 weeks (range: 2-32 weeks). Most patients experienced an insidious onset of symptoms, with groin or thigh pain, and a minor traumatic event was reported in three cases (3 of 11 hips). Based on Southwick slip angle measurements, nine slips were mild, one moderate, and one severe (Table 1). The method of treatment applied was in situ fixation under fluoroscopy. In patients younger than eight years, K-wire fixation with two 2 or 2.5 mm wires was preferred (five hips; Figure 1), while single partially threaded cannulated screw (CS) fixation was used for patients 8-10 years old (six hips; Figure 2). The mean follow-up was 34 (range: 3-74) months, and one patient was lost in follow up (Table 1). All hips with mild slips had a normal hip range of motion with no restriction in every-day activities or sports. One case that was stage II had reduced internal rotation and abduction due to residual varus deformity that limited sports activities. No residual pain or lateral thigh discomfort was reported. Radiologically no signs of AVN of the femoral head or further slip progression were noted. 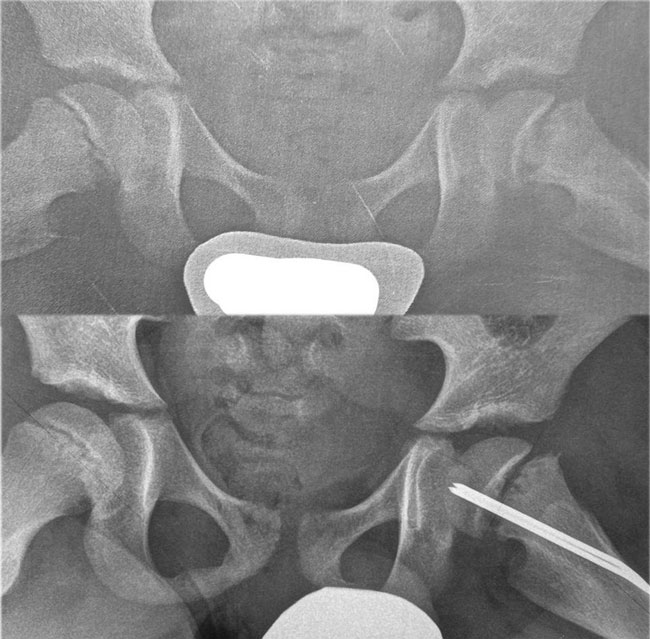 Two hardware-related complications, requiring secondary surgery, were noted in the K-wire fixation group. In one case, there was K-wire loosening that was replaced a year after the initial surgery. The second case consisted of mechanical failure (breakage) of one K-wire and loosening of another, in a patient with bilateral involvement, five years after the initial surgery. The broken K-wire was removed and not replaced by another implant, with part of it remaining buried in the femoral neck (Figure 3). In the hips that were fixed with one CS, no hardware-related complications were observed. 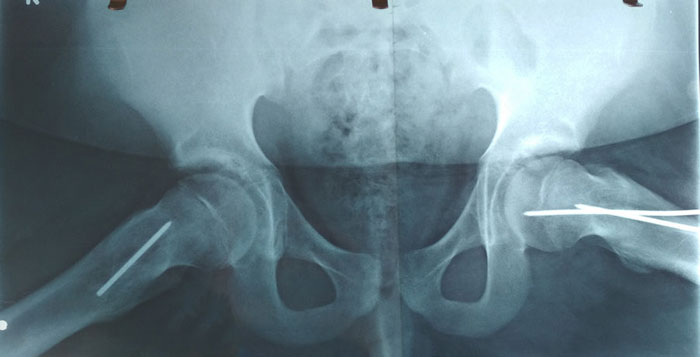 SCFE was a condition that was traditionally thought to be prevalent among adolescents, but it appears that this tendency is changing. Studies that exclusively address children under the age of ten years are sparse in the literature and limited to case reports or case series5,9-11. In a recently published retrospective study of 89 patients with SCFE, 18 were under ten years old5. Furthermore, in a population-based epidemiological study performed in Sweden, of the 379 participants, six were under nine years of age and 19 between 9-10 years old12. In 2010, Azzopardi et al reported a case series of ten children presenting with early-onset epiphysiolisthesis9. Our series represents a small but not negligible number of cases, considering that it represents 19.4 % of the total patients treated during the study period.

Obesity is an established predisposing factor for SCFE1,3,5,13,14. Increased body mass, the persistence of the perichondrial ring, and high activity levels are important factors in the pathogenesis of SCFE15. Shearing forces exerted on the hips of overweight children, especially the younger ones, during normal activities could cause a slip, especially when the perichondrial ring is damaged16. Obesity is present in more than 50 % of the children affected at any age and even more in the younger ones. In recent studies, obesity was reported to be more prevalent in children under ten years of age2,17-19. This is consistent with our findings in which all patients were above the 97th percentile BMI-for-age that indicates an obesity problem20. According to the WHO European Childhood Obesity Initiative 2009/2010, our country has the highest European rate of male and female obesity in children between 7-9 years old. The percentage of overweight males in our country rises to 57.2 % for 9-year-olds and 48.9 % for 7-year-olds21; a fact that is quite alarming, suggesting that the incidence of SCFE may increase even more in the future, and points to the urgent need for national measures to reduce this phenomenon.

Treatment of SCFE in young children is challenging. It requires careful consideration when choosing the fixation method, which needs to have the least impact on the growth potential of these patients. If the physis remains functionally normal, remodeling is expected, minimizing the risk of secondary developmental deformities such as leg-length discrepancy, coxa vara, coxa breva, and abductor weakness22-24. In situ fixation for mild and moderate slips is an effective method since it prevents further progression of the slip, and allows growth and remodeling of the femoral head. The use of K-wire stabilizes the physis and does not impede the future growth of the femoral head25. As a downside, this technique may require future operations since there is a high probability that these patients will outgrow or fracture the material5,9. We used two K-wires as fixation material in children aged 6-8 years because of their substantial growth potential and small size of femoral epiphysis. Children between the ages of 8 and 10 were treated with partially threaded CS fixation with no compression. Both methods were stable concerning slip progression. We continue to monitor these children for mechanical, hardware-related complications.

Another critical consideration in this age group is bilateral involvement and whether prophylactic fixation of the contralateral hip should be undertaken5,9. In our practice, no prophylactic pinning was performed, but the parents were informed of the strong possibility of slip on the contralateral side. Overall we had two of the nine patients (22.2 %) presenting with a contralateral slip in less than a year from the first. At the least, these patients should be closely monitored for early signs of slippage, and weight-reduction strategies should also be employed.

Limitations of the current study are the small number of patients, the fact that it is a retrospective observational study, and in some cases, there is no long-term follow-up since there is ongoing monitoring of the patients.

Treatment of SCFE in young children precludes the necessity of physeal sparing techniques. The use of two K-wires or a single partially threaded CS for fixation, both provide stability and accommodate the future growth of the femoral head. K-wire fixation is recommended at the very young ages (6-8 years old), but there is an increased risk for future hardware-related complications. It is of utmost importance for the pediatric orthopedic surgeons and pediatricians to diagnose this condition at an early stage when the prognosis is more favorable. SCFE should be part of the differential diagnosis of overweight or obese children under ten years, presenting with hip-related pathology.

The authors declare no conflict of interest. Young patients received during their hospitalization, the standards of care according to institutionally approved protocols.