Background:  Jugular bulb diverticulum constitutes a rare clinical entity that may present with variable symptoms. When obstructing the endolymphatic duct, it may cause sensorineural hearing loss and vertigo, mimicking Meniere’s disease. Diagnosis is based on computed tomography and magnetic resonance imaging scans, with magnetic resonance and digital subtraction angiography being more specific and detailed diagnostic methods. Treatment options include surgical decompression, endovascular embolization, or stenting.

Description of the case: We report a jugular bulb diverticulum case manifesting as Meniere’s disease and treated with endovascular embolization. The procedure was uneventful, and the patient’s vertigo gradually disappeared over two months. No medical treatment was required for the next 2.5 years as the patient remained asymptomatic with no more vertigo attacks.

Conclusion: Endovascular embolization can be the method of choice in selected cases of jugular bulb diverticulum. HIPPOKRATIA 2019, 23(4): 172-174.

The jugular bulb varies widely in position and dimensions. However, a jugular bulb diverticulum (JBD), which is considered a true venous anomaly, is a rare clinical entity, at times combined with a high jugular fossa. In some cases, it is asymptomatic, but it may also present with various symptoms, more commonly pulsatile tinnitus, sensorineural or conductive hearing loss, and vertigo. Several imaging modalities may contribute to the definitive diagnosis, such as computed tomography (CT) or magnetic resonance imaging (MRI) scans, CT or MR angiography, or digital subtraction angiography (DSA). As for treatment options, both surgical and endovascular approaches have been reported in the literature1-3.

We present a rare case of a patient with right JBD suffering from intractable vertigo and ipsilateral hearing loss.

A 53-year-old male presented with a 4-month history of intractable vertigo not responsive to medical treatment, and progressive fluctuating right-sided hearing loss. Audiology testing revealed moderate sensorineural hearing loss. According to the patient’s history and both clinical and audiological findings, Meniere’s disease was deemed as the probable diagnosis based on the most recently published guidelines. The patient underwent the glycerol test as a supporting diagnostic test, which was also positive on the right side (Figure 1). 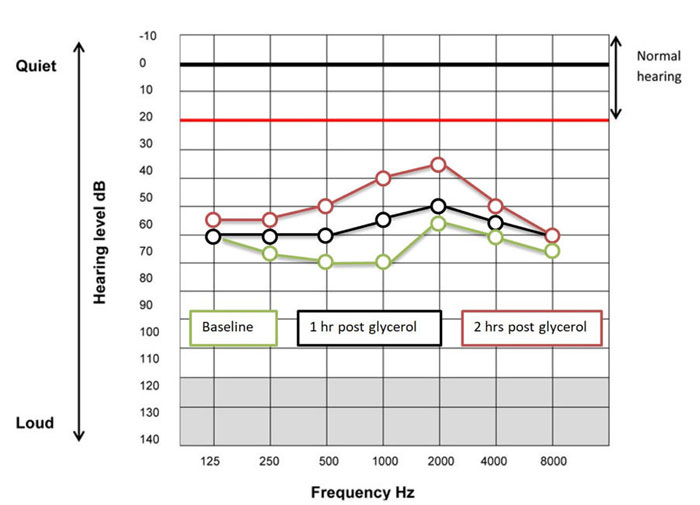 Due to the persisting symptoms and inadequate response to medical treatment, we proceeded to further investigations. Specifically, imaging with a CT and MRI scans showed a high position and a diverticulum of the right jugular bulb, closely related to the cochlea, the vestibular aqueduct, the middle ear (hypotympanum) as well as to the mastoid cells without, however, invading into any of these structures (Figure 2, Figure 3, Figure 4). DSA also showed dilatation of the right jugular bulb and sigmoid sinus with a diverticulum at the level of the sigmoid-jugular junction (Figure 5).

Figure 2: Computed tomography scans of the skull base, axial view. High position and enlarged jugular bulb on the right side (arrow; A, B). 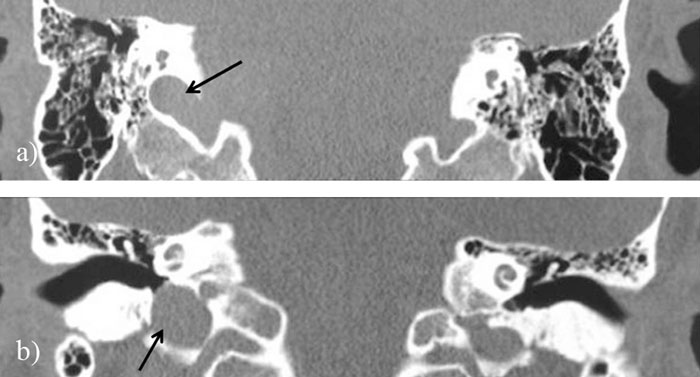 Figure 3: Computed tomography scans of the skull base, coronal view. High position and enlarged jugular bulb on the right side (arrows; A, B).

Figure 5: Digital subtraction angiography, venous phase: coronal (A) and sagittal (B) views. Jugular bulb diverticulum on the right side (arrows; A, B).

After a detailed discussion with the patient, informed consent was obtained to proceed with embolization of the diverticulum. The patient was treated with endovascular embolization and thus occlusion of the diverticulum, sigmoid sinus, and jugular vein with hydrocoils (Onyx Liquid Embolic System, Medtronic, Irvine, CA, USA) (Figure 6). The whole procedure was uneventful, and the patient’s vertigo gradually disappeared over a period of 2 months. The patient remained asymptomatic with no vertigo attacks and with no need for medical treatment for 2.5 years. Hearing improved on the right side and reached the 2-hour post glycerol level thresholds (Figure 1). The patient had recently another vertigo attack (2.5 years after embolization); however, he refused any further investigation for the time being.

Figure 6: Digital subtraction angiography showing the insertion of hydrocoils (A; arrow), and following occlusion of the jugular vein, diverticulum, and sigmoid sinus on the right side (B).

The jugular bulb varies in position and dimensions. In some cases, it expands to the point of forming a diverticulum. JBD is a rather rare clinical entity, with only a few cases reported in the literature.

Although sometimes it remains asymptomatic, variable symptoms may arise, depending on the direction of its expansion. It may grow towards the middle ear with or without erosion, the cochlea, the posterior semicircular canal, the vestibular or cochlear aqueduct, the mastoid facial canal, or the internal acoustic meatus, thus causing conductive or sensorineural hearing loss, pulsatile tinnitus, vertigo or even cranial nerve palsy. At times it may be dehiscent and has been described to cause significant intra-operative bleeding during otologic surgery4-7. Οur patient presented with both sensorineural hearing loss and vertigo, symptoms that can be explained by its close relationship with the cochlea, vestibular aqueduct, and endolymphatic duct. The patient also had a positive glycerol test, leading to the clinical diagnosis of Meniere’s disease.

Meniere’s disease can present with variable symptoms, which may appear all at once or progressively. According to the most recently published clinical practice guidelines, a definite diagnosis of Meniere’s disease is based on the following criteria: two or more spontaneous attacks of vertigo, each lasting 20 minutes to 12 hours, audiometrically documented fluctuating low- to mid-frequency sensorineural hearing loss (SNHL) in the affected ear on at least one occasion before, during, or after one of the episodes of vertigo, combined with fluctuating aural symptoms (hearing loss, tinnitus, or fullness) in the affected ear and exclusion of other causes by additional testing8. Its cause remains controversial, although it has been linked to endolymphatic hydrops mostly induced by impaired endolymph drainage or less often excessive secretion. Head trauma, middle ear, and upper respiratory tract infection, allergy and autoimmune response, aspirin, alcohol, caffeine, smoking, and increased salt consumption are all considered triggering factors. However, other conditions may present themselves with Meniere’s-like symptoms (Meniere’s syndrome) such as multiple sclerosis, syphilis, perilymph fistula, acoustic neuroma, and Cogan’s syndrome or in sporadic cases a venous anomaly like in our patient. This is why imaging is essential to exclude other clinical entities and confirm the diagnosis in every case of a suspected Meniere’s disease, with MRI being the examination of choice2,5,6.

In the reported case, MRI, high-resolution CT scan, and DSA were performed for the diagnosis and pre-treatment evaluation of the patient. As far as JBD is concerned, different kinds of examinations may be used to diagnose and define its extent. A high-resolution CT scan will reveal the size of the jugular fossa and bony erosion or defects in the nearby structures. A CT angiography can add further information on vascular formations and blood flow, which could also be acquired from an MR angiography or a DSA9.

Surgical and endovascular approaches have both been described for the treatment of a JBD. In most reported cases, surgical treatment has been the method of choice, and includes mastoidectomy and compression of the diverticulum with bone wax, with satisfactory results on the patients’ symptoms1. The same type of surgery is also used for the treatment of sigmoid sinus diverticula. However, the above surgery stands a risk of severe complications such as massive bleeding or facial nerve injury10.

On the other hand, endovascular treatment by embolization and/or stenting has been more often described for diverticula of the sigmoid sinus11 and less often for those of the jugular bulb2, with similar results to surgical treatment in both cases12. Complications of this method are rare, with the most frequent being retroperitoneal hematoma and subdural hematoma. After embolization, the diverticulum may gradually recanalize, leading to reappearance of the symptoms10,12. In our patient endovascular embolization was chosen after a detailed discussion with the patient. The procedure was performed successfully and uneventfully, relieving the patient of his symptoms for at least 2.5 years.

A JBD is an uncommon venous anomaly that may cause various otologic symptoms, including Meniere’s-disease-like symptoms, and can be successfully treated through both surgical and endovascular techniques. Endovascular embolization can be the method of choice in selected cases.