Background: Posterior reversible encephalopathy syndrome (PRES) is a clinical-radiological syndrome, which is presented with headache, seizures, altered mental consciousness, and visual disturbances, and is characterized by white matter vasogenic edema, predominantly affecting the posterior occipital and parietal lobes of the brain. This clinical syndrome is increasingly recognized due to the improvement and availability of brain imaging and, more specifically, magnetic resonance imaging.

Case report: We report the case of an otherwise healthy 20-year-old female who presented with fever, headache, and generalized arthralgia, raising the suspicion of Neisseria meningitidis serotype B meningitis, which was later complicated by PRES. The patient was treated with the antiepileptic drug levetiracetam, mannitol, and dexamethasone. Her mental status was completely restored in 3-4 days after the initiation of the treatment for PRES and was characterized by rapid clinical recovery.

Conclusion: PRES is a neurotoxic state characterized by a unique brain imaging pattern typically associated with a number of complex clinical conditions including infection, sepsis, and shock. The syndrome should be promptly recognized since it is reversible and treatable. HIPPOKRATIA 2019, 23(2): 131-134.

Posterior reversible encephalopathy syndrome (PRES), first described by Hinchey in 1996, is a clinical-radiological syndrome, that is characterized by a variety of symptoms such as headache, confusion, seizures, as well as visual disturbances, and consists of radiological findings of edema, that impacts on the white matter in the posterior regions of the cerebral hemispheres, and especially the parietal-occipital regions bilaterally1-3. This syndrome should be promptly identified since it is reversible and treatable1, and is characterized by benign prognosis when adequate treatment is immediately initiated4,5.

There is a wide variation of severity in the clinical symptoms, i.e., the visual disturbances can range from blurred vision, visual hallucinations, visual neglect, and homonymous hemianopsia to cortical blindness. Altered consciousness may vary from mild confusion or agitation, progressing even to coma. Other symptoms include nausea, vomiting, and brainstem deficits, whereas seizures that can emerge in up to 90 % of cases and status epilepticus are quite often the presenting manifestation6.

PRES is a syndrome of heterogeneous etiologies and is associated with clinical conditions such as preeclampsia, eclampsia, autoimmune disease, cancer chemotherapy, transplantation including bone marrow or stem cell transplantation, hypertension, as well as infection, sepsis, and shock5,7.

We report the case of an otherwise healthy adult female presenting with fever, headache, and generalized arthralgia, raising the suspicion of Neisseria meningitidis serotype B meningitis, which was later complicated by PRES.

A 20-year-old female with an unremarkable medical history presented to the emergency department with complaints of high-grade fever (up to 39 oC) for the past 24 hours, severe headache, and generalized arthralgia. Upon admission, the patient was in a progressively deteriorating condition with blood pressure: 140/70 mmHg, temperature: 39.1 oC, heart rate: 108 bpm, peripheral oxygen saturation: 98 %, and Glasgow Coma Scale (GCS): 15/15. Blood tests demonstrated a total leukocyte count of 25.8 K/μl (normal range: 3.5-11 K/μl), predominantly neutrophils (94.20 %), and C-reactive protein: 175.10 mg/L (normal range: 0-5 mg/L). Interestingly, the patient’s level of consciousness progressively dropped during her evaluation at the emergency department, and during this period, the patient’s reassessment revealed increased nuchal rigidity and Kerning’s sign, suggestive of central nervous system involvement (GCS: 11/15).

Based on the presumed diagnosis of bacterial meningitis, she was immediately treated with intravenous (i.v.) dexamethasone, followed by i.v. Ceftriaxone and Vancomycin, according to the European guidelines of empiric treatment for bacterial meningitis. Additionally, a computed tomography (CT) scan of the brain was performed that did not reveal any abnormal findings.

The patient was directly transferred to the intensive care unit (ICU) after endotracheal intubation due to her rapidly diminishing state of consciousness while she continued receiving i.v. Ceftriaxone.

After three days of hospitalization in the ICU, a follow-up head CT scan was performed that did not reveal any significant alterations, while a new lumbar puncture revealed a decrease in the cerebrospinal white blood cell count by approximately 50 % compared to the initial value. After seven days of hospitalization in the ICU, the endotracheal tube was removed, and the patient was transferred to the general ward. On physical examination, her blood pressure, pulse rate, and body temperature were normal, but she presented with lethargy and demonstrated visual disturbances (cortical blindness). 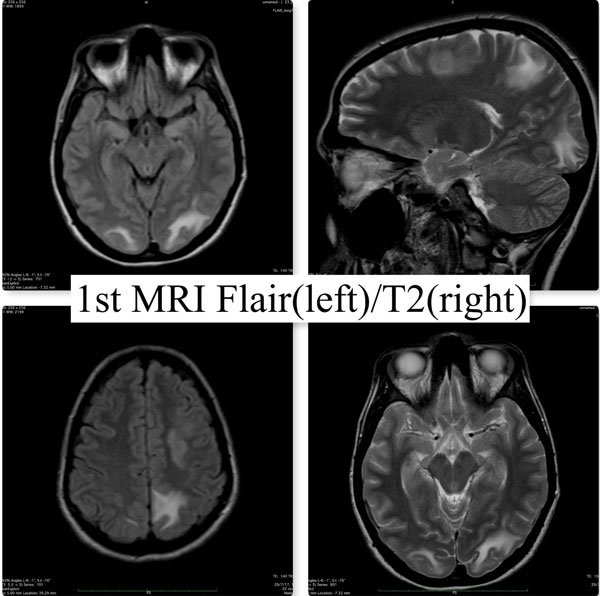 The patient was treated with the antiepileptic drug levetiracetam, mannitol, and dexamethasone, based on the clinical suspicion of the presence of PRES. The patient’s mental status was completely restored in 3-4 days after the initiation of the treatment for PRES and was characterized by rapid clinical recovery.

Follow-up MRI (T2 and FLAIR) images on the 23rd day revealed complete resolution of the previous diffuse, hyperintense lesion in both parietal-occipital regions of the brain (Figure 2), confirming the diagnosis of PRES. A follow-up MRA was also normal. The time correlation between the clinical recovery and the resolution of the MRI abnormalities is in accordance with the literature, which states that the symptoms usually seem to resolve in about 3–8 days, while the recovery of the MRI abnormalities usually takes longer, from several days to weeks6. 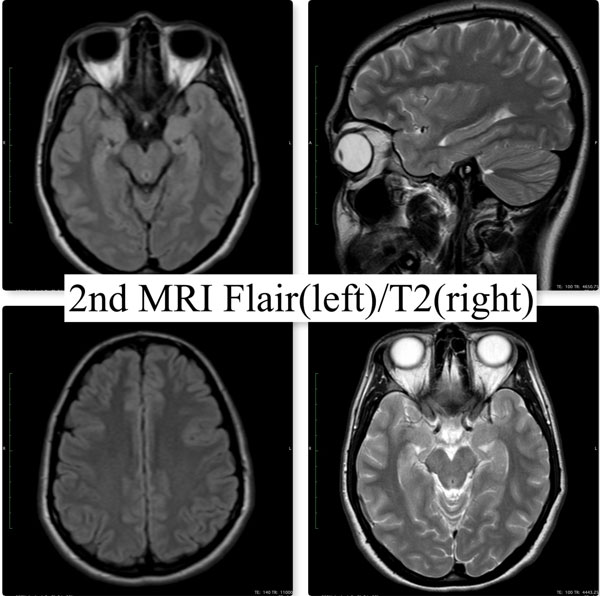 Figure 2: Follow-up brain magnetic resonance imaging of the patient on the 23rd day revealing complete resolution of the previous diffuse, hyperintense lesion in both parietal-occipital regions of the brain [axial T2 (right side) images and sagittal and axial FLAIR (fluid-attenuated inversion recovery) (left side)].

The patient was discharged from the hospital, with per os treatment of the antiepileptic drug levetiracetam, while the rest of the medication was gradually discontinued. She was monitored closely for the following six months, at the end of which a follow-up MRI and an electroencephalogram were conducted that revealed no abnormal findings. Finally, at the end of this period, treatment with levetiracetam was also discontinued.

The cause of PRES is not yet established since the pathophysiology of this complex entity is multifactorial. According to recent studies, there has been an emerging correlation between PRES syndrome and infection, as well as sepsis8. There have been reports of the occurrence of PRES within weeks of bacteremia and tissue infection, with an unexpectedly high incidence of gram-positive infection8. A complete understanding of the pathophysiological mechanisms underlying this intriguing correlation is a challenge for the medical community since the body’s response to infection involves a plethora of biological pathways.

In terms of mechanisms at a biological level, several postulates may potentially fill in the unknown pathophysiological gaps between primary infection, secondary septic response, and PRES syndrome. Substantial mechanisms, including reduction of the cerebral blood flow and subsequent oxygen consumption, cerebral edema, and disruption of the blood-brain barrier, are embodied in the pathophysiology of infectious encephalopathy. Additionally, these phenomena might be derivative of the impact of inflammatory mediators on the cerebrovascular endothelium, as well as the effects of impaired neurotransmitter composition of the reticular activating system, abnormal astrocyte function, and neuronal degeneration9,10. Bacterial and viral infections like meningitis seem to play a role in the pathogenesis of PRES that involves causing endothelial injury and microcirculation disturbances. The microcirculatory alterations are secondary to microvessel blockage by leukocytes that result in reduced tissue perfusion11,12. The mechanism behind the development of the vasogenic edema and CT or MRI imaging appearance of PRES is not known. Three theories have been historically proposed1,13,14: i) Focal vasoconstriction resulting in local hypoperfusion and cerebral infarction, ii) Autoregulatory failure resulting in brain hyperperfusion and vasogenic edema, and iii) Endothelial dysfunction resulting in capillary leakage as well as blood-brain barrier disruption15, leading to fluid and protein transudation into the brain.

Endothelial dysfunction appears to play a crucial role in the development of infection, since the release of inflammatory mediators such as tumor necrosis factor (TNF)-α, interleukin 1-β, and other cytokines results in up-regulation of endothelial surface antigens, leading to microcirculatory dysfunction, increase in vascular permeability, and leukocyte adherence8,16. Endothelial damage, in combination with blood-brain barrier disruption, results in further fluid and protein transudation in the brain. Potent vasoconstrictors, such as endothelin-1, released form endothelial cells have a direct negative impact on vascular stability. This impact manifests as the development of focal vasoconstriction, which is combined with local hypoperfusion and cerebral infarction. In severe sepsis, such vasoconstrictors appear in higher concentrations due to the up-regulation of messenger ribonucleic acid (mRNA) production associated with the inflammatory cytokines TNF-α and interleukin-1.

In-depth knowledge and understanding of these pathophysiological pathways, yet to be achieved, is essential because, according to several studies, delayed diagnosis and treatment of PRES may lead to death or irreversible neurological deficit. Death may result from progressive cerebral edema, from intracerebral hemorrhage or infarction17, or as a complication of the underlying condition. Some patients develop unprovoked seizures and epilepsy after recovering from PRES, but this appears to be rare.

PRES is increasingly recognized and reported in case reports and case series; however, the incidence of PRES is not known. Patients of all age groups appear to be susceptible; in the reported cases, patients as old as 90 years and as young as two years exist. Case series suggest that PRES is more common in women, even when patients with eclampsia are excluded. There are not any standard guidelines on the treatment of PRES. Treatment recommendations are based on observational data and vary depending on the associated medical conditions (e.g., preeclampsia, eclampsia, autoimmune disease, cancer, transplantation, hypertension, infection) that present in each case5. The recurrence of PRES appears to be infrequent (<10 %)18, even though inciting factors commonly recur in these patients.

PRES is a neurotoxic state characterized by a unique brain imaging pattern typically associated with a number of complex clinical conditions including infection, sepsis, and shock8,12,13. The syndrome should be promptly recognized since it is reversible and treatable1.

A direct connection between systemic infection and sepsis with PRES remains a challenge for the clinical doctor. Several mechanisms have been suggested in order to understand and make headway into the meandering paths of this pathophysiological labyrinth. According to recent literature, cytokine release is believed to play a crucial role in systemic toxicity appearing in infection and sepsis, with direct effects on endothelial integrity and cerebral autoregulation19. The disruption of these compensatory mechanisms leads to capillary leakage, cerebral infarction, and vasogenic edema.

Knowledge and deep understanding of these pathophysiological pathways, yet to be achieved, is vital because, according to several studies, delayed diagnosis and treatment of PRES may lead to death or irreversible neurological deficit. Improved knowledge and research about factors affecting the outcome of PRES will result in better early management, less morbidity, and mortality20.

Authors state no conflicts of interest.

Written informed consent was obtained from the patient for publication of this case report and any accompanying images. Figures 1 and 2 are courtesy of Iatriki Apikonisi Volou.