Methods: Data for Brucella spp. culture capacity and the number of isolations were collected annually from public hospitals nationwide, during 2015-2018. The number of unreported cases was estimated after subtracting the National Mandatory Notification System cases from the survey-captured isolations, matched by hospital and year.

Results: Feedback was provided by 112 public hospitals (response rate: 97.4 %). Brucella spp. isolation capacity was completely absent in 27.7 % of hospitals; during the four years of the study, 11.3 %, 13.9 %, 20.0 %, and 25.2 % of the hospitals had isolation competence for one, two, three, or four years, respectively. Underreporting assessment was possible in hospitals that declared at least one Brucella spp. isolation (n =35) and unreported cases were identified in 19 (54 %). Α mean underreporting of 28.9 % of total cases was estimated for the whole period of the study ranging annually from 24.1 % to 35.0 %. The number of unreported cases per hospital ranged from one to 12 per year (median: 2, IQR: 5).

Conclusions: Interventions for improving diagnosis and reporting of the disease are recommended. Assessment of brucellosis underreporting by comparing raw numerical data of survey-captured isolations and officially notified cases lacks the case by case specificity, however, keeping required data to a minimum achieves high feedback rate from hospitals and provides a tentative estimation of the notification deficit. HIPPOKRATIA 2019, 23(3): 106-110.

The monitoring of zoonotic diseases of public health importance, the prompt response to outbreaks, and the health policy planning rely on efficient notification systems1. However, surveillance of communicable diseases may suffer from an underestimation of the true incidence rate. Failure to precisely record cases may stem from different levels of the surveillance process, at the community level by cases not seeking or reaching health providers, or at the health settings level by underdiagnosis or underreporting of cases2.

Brucellosis is endemic in Mediterranean countries3; as confirmation of diagnosis relies on specific laboratory methods, the laboratory capacity would be an essential component of the notification process4. Furthermore, the true notification rate of the diagnosed cases cannot be estimated since the extent of underreporting is unknown5,6.

In Greece, brucellosis presents the highest notification rate among the European countries7. Brucellosis is a mandatorily notified disease, and the surveillance is based on the case definition laid down by the European Center for Disease Prevention and Control (2012/506/EC). The laboratory diagnosis entails the culture/isolation of the pathogen, the identification of specific antibodies, or the detection of Brucella spp. nucleic acid. However, only few studies are available for the hospitals’ laboratory diagnostic capacity and the brucellosis underreporting in Greece8-10.

In this study, we present our findings on the public hospital laboratory capacity for Brucella spp. isolation and an estimation of brucellosis underreporting based on the comparison between laboratory data and the cases reported at the National Mandatory Notification System (NMNS) in Greece for the period 2015-2018.

A survey was conducted annually by the National Public Health Organization (NPHO) for the years 2015-2018 in the frame of an investigation of the diagnostic capacity and the efficiency of the disease surveillance regarding food-borne communicable diseases. In the first trimester of each year, a structured questionnaire, containing fields for the laboratory capacity of Brucella spp. isolation and the absolute number of positive cultures regarding the previous year was distributed to the laboratories of all Greek public hospitals. The questionnaire was accompanied by an official letter explaining the rationale of the study, i.e., identifying laboratory weaknesses and gaps in the disease surveillance. Incoming information on positive cultures was collected in the form of aggregated data without patient identifiers.

The officially recorded via the NMNS brucellosis cases were obtained by the registry of NPHO; the corresponding data included the hospital and the year of reporting, the methods, and the results of the laboratory diagnosis, without patient demographic data.

The underreporting rate was defined as the percentage of unreported cases against all known cases. Underreporting hospitals were defined as the ones with at least one unreported case. The culture capacity per local administrative unit (regional unit) was estimated based on the highest capacity in years, recorded in the public hospitals located in the respective regional unit.

Hospitals were characterized as urban and non-urban, and as academic and non-academic. The status of a hospital (urban/non-urban) was based on its location in an administrative unit characterized as “predominantly urban” by the European Statistical Office11,12; these locations in Greece include only the region of Attica and the regional unit of Thessaloniki. According to Eurostat, all other locations characterized as “intermediate” and “predominantly rural” were considered rural for the purposes of the study. A hospital satisfied the academic criterion if the infectious diseases department was supervised by the local university medical school.

In the analysis, survey records of hospital-years with at least one positive culture were selected and linked with the records of the respective hospital-years from the NMNS database. The net amount of unreported cases was calculated as the positive residue after subtracting all NMNS reported cases, regardless of the laboratory method for diagnosis used, from the respective survey-reported isolations (Figure 1). 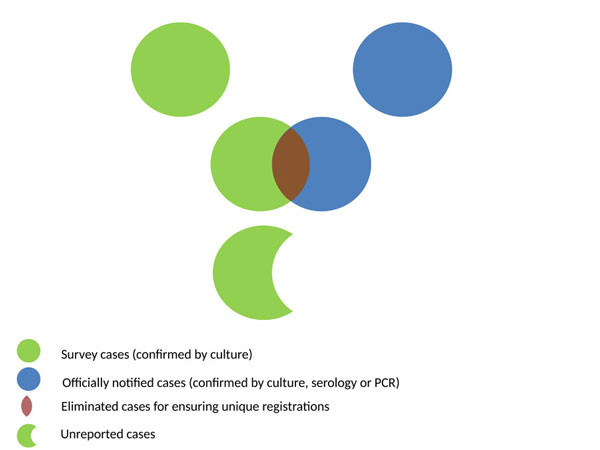 The NPHO may publish reports and engage in studies concerning epidemiologic research using non-identifiable data of statistic nature. This study used only aggregated and non-identifiable surveillance data which do not qualify as personal data according to article 2, lit. A, Law 2472/1997 and the currently in force Regulation (EU) 2016/679 (General Data Protection Regulation), therefore no ethical approval was necessary.

Among the 115 public hospitals surveyed during 2015-2018, data was provided by 112 (97.4 %) for at least one year. Three hospitals did not provide feedback at all. An average of 85 hospitals per year (min 84 – max 90) replied, and among these, an annual average of 58 (min 53 – max 64) reported Brucella spp. isolation capacity. The total number of years with effective isolation capacity varied among hospitals, with 27.7 % not having such capacity at all during the study period (Table 1). 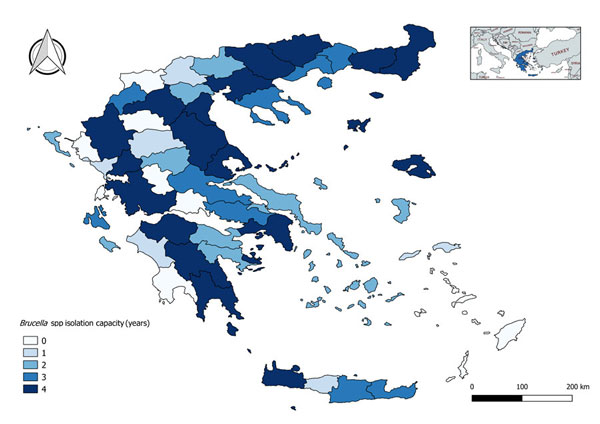 In total, 221 Brucella spp. isolations were received by 35 hospitals as survey-feedback. During the study period, 424 brucellosis cases were officially registered to the NMNS; among those, 167 were matched with the survey data by hospital and year of reporting, resulting in 70 linked records. 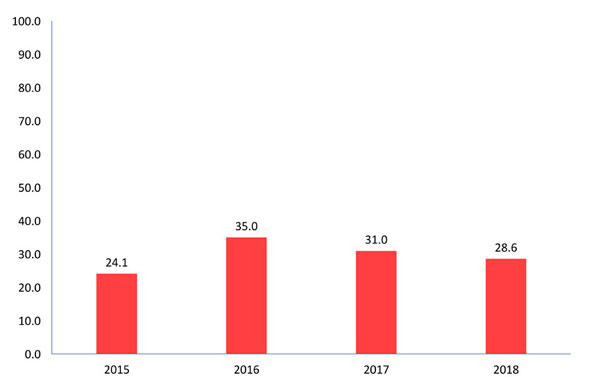 In public hospitals with at least one unreported case for the study period, the mean annual underreporting rate was estimated at 49 % (95 % CI: 33-66 %).

Significant brucellosis underreporting was identified even when estimating the minimum amount of possible unreported cases by eliminating overlapping records and estimating only the surplus of isolations for ensuring a unique registration for each case. The described approach for capturing underreporting differed from the standard methodology8,13 because it required minimal information in the form of aggregated data. Possibly, the less required information contributed to the observed very high response rate among the participating public hospitals.

Brucellosis underreporting has been previously demonstrated in Greece; our results concur with the findings of Jelastopulu et al9   of almost 25 % unreported cases during a 5-year study in one region in Greece whereas Avdikou et al10 reported approximately 80 % underreporting rate, in a 2002-2004 regional study. Deficits in reporting of brucellosis cases have also been described in Turkey6 (68 %), as well as in several other countries14. Considering the results presented by other researchers, we conclude that our findings of brucellosis underreporting in Greece fall within the expected range.

Noteworthily, the underreporting rate varied among hospitals but without significant variation for each hospital throughout the years, suggesting a hospital-specific behavior towards notification of communicable diseases. Researchers have attributed underreporting to the reluctance of the medical personnel to notify properly, due to disapproval or misinformation regarding reporting, to the increased hospital work burden, and the limited material and human resources for laboratory diagnosis or for accomplishing the notification tasks15-18 whereas lack of appropriate training is also a critical factor19. The urban and/or academic profile of hospitals was not associated with underreporting of brucellosis, contrary to previous reports in Greece, regarding other mandatorily notifiable diseases8.

The study revealed that a significant proportion of brucellosis patients were diagnosed with culture but remained unregistered to NMNS. An intrinsic difficulty in culture reporting stems from the relatively long period of several days or weeks required for the culture/isolation outcome. In contrast, the serology methods produce prompt results, have considerably less bio-security concerns, and are widely available, even though they lack specificity20-22. We hypothesize that the unreported cases of our study were diagnosed only by means of Brucella spp. isolation without concurrent positive serology or polymerase chain reaction (PCR), and due to the comparatively long incubation period for finalizing the culture result, the momentum of notification was lost. Baldi et al23, and Serra and Viñas24, described that a proportion of brucellosis cases might be diagnosed by culture alone, with the serology tests remaining negative; Yagupsky25,26 reported that Brucella spp. isolations might occur unexpectedly during routine incubation of clinical samples from patients without suspicion of brucellosis. Among registered cases, PCR was rarely used for diagnosis; only 12 (2.8 %) of the cases were PCR-confirmed during 2015-2018. However, due to the lack of relevant data, our hypothesis cannot be attributed to confirmation of brucellosis with positive cultures of Brucella spp. as a stand-alone method or combined with false-negative results of serology or PCR techniques.

Further investigation is required for identifying and addressing the reasons that lead to underreporting and for elucidating a possible correlation of culture-only diagnosis with lower reporting rates.

The analysis was based on comparing numbers of records from both survey and NMNS datasets, but a linkage on an individual case by case basis was not possible. The NMNS cases might have coincided with the ones of the survey but might have reflected other cases as well; a higher rate of a case by case matching would bring the study results closer to true underreporting.

Each Brucella-positive culture was assumed to correspond to a single case, and this represents a limitation of our study since no differentiation of cultures from the same patient was possible, and this would have led to an overestimation of the underreporting rate. Furthermore, in Greece, the population is not registered at particular healthcare settings, and the same patient would visit more than one health care facilities for the same symptoms and thus provide more than one cultures. However, in accordance with the common practice, we presume that no additional cultures are utilized in the diagnosed patients with brucellosis for the same infection event; the physicians usually monitor the response to therapy with the clinical course and the aid of the antibody titer. Also, we consider that patients diagnosed and followed up at the local hospital rarely visit any other public hospitals for the same medical issue. Furthermore, even if patients have a preference to visit a different hospital than the local one, consistent behavior is anticipated, and introduced bias may affect the implicated hospitals but not the results of the study at a national level.

Recovered patients, presenting again with symptoms and with a positive culture, were regarded as new cases since relapse and re-infection are impossible to distinguish. Nevertheless, cultures are markedly less sensitive21 in relapses than in the primary infection, whereas serology methods may be more suitable for identifying active disease in patients suspected for relapse27.

A considerable deficit of the capacity to isolate Brucella spp. and a high underreporting rate were identified among public hospitals in Greece. The underreporting rate of brucellosis cases significantly varied among public hospitals, but each hospital had an invariable underreporting profile throughout the years. A partition of brucellosis cases might be refractory to reporting due to being exclusively diagnosed by isolation of the pathogen and the long time required to finalize the culture result. The reasons that lead to underreporting should be elaborately investigated and addressed. Assessment of brucellosis underreporting with the crude number of positive cultures yielded a high response rate from hospitals and provided a tentative estimation of the notification deficit but with a risk of underestimating the true notification deficit.