Background: Management of coronary artery graft failure, especially at the site of a recent distal anastomosis, is a challenging clinical situation, and literature data are scarce.

Case series: We present a case series of patients with coronary artery bypass graft failure up to six months after surgical revascularization, who were treated with percutaneous coronary intervention at the site of distal graft anastomosis through the graft or the native vessel.

Conclusions: Percutaneous coronary intervention at distal graft anastomotic lesions is challenging, it can be performed from either the graft or the native vessel, and the angiographic result may not always be optimal. HIPPOKRATIA 2019, 23(2): 87-91.

Coronary artery bypass grafting (CABG) is the treatment of choice for revascularization in patients with complex multivessel coronary artery disease (CAD) and has proven long-term survival benefits, especially in patients with diabetes1-3. The success of CABG depends on constructing quality anastomoses with durable conduits on to appropriate target coronary arteries. Recurrence of angina after CABG has been reported to appear in 8.9 % of the patients at 16 months4 and can be divided into the following categories: early (less than one month), subacute (one month to one year), and late (beyond one year)5. Graft failure is the major cause of resistant or recurrent angina after surgical revascularization5 and remains a significant challenge for interventional cardiologists, especially when it occurs at the site of the distal anastomosis. We report six cases of percutaneous coronary intervention for the management of graft failure at the site of the distal anastomosis up to six months after CABG (Table 1).

Case 2: A 65-year-old man, ex-smoker, with a history of arterial hypertension, dyslipidemia, and surgical coronary revascularization four months earlier, was presented for coronary catheterization due to unstable angina. Coronary angiography showed a three-vessel CAD with total occlusion of the RCA at the site of the anastomosis to a vein graft. Part of the vein graft could be visualized retrogradely through the RCA angiography. Also, the proximal part of the RCA could be visualized retrogradely through vein graft angiography (Figure 2). The other grafts were patent without significant stenoses. We decided to perform elective percutaneous intervention at the site of the total occlusion, through the vein graft, due to extensive calcification of the native RCA. Predilatations were performed with 1.5 × 15,  2.0 × 15, and 2.5× 15 mm Maverick balloons (Boston Scientific, MA, USA) inflations, followed by the implantation of two overlapping Promus Premier coronary stents (2.5 × 28 and 2.5 × 20 mm), inflated up to 18 atmospheres. Post-intervention angiography showed a nice result, with TIMI III blood flow and no residual stenosis (Figure 2). 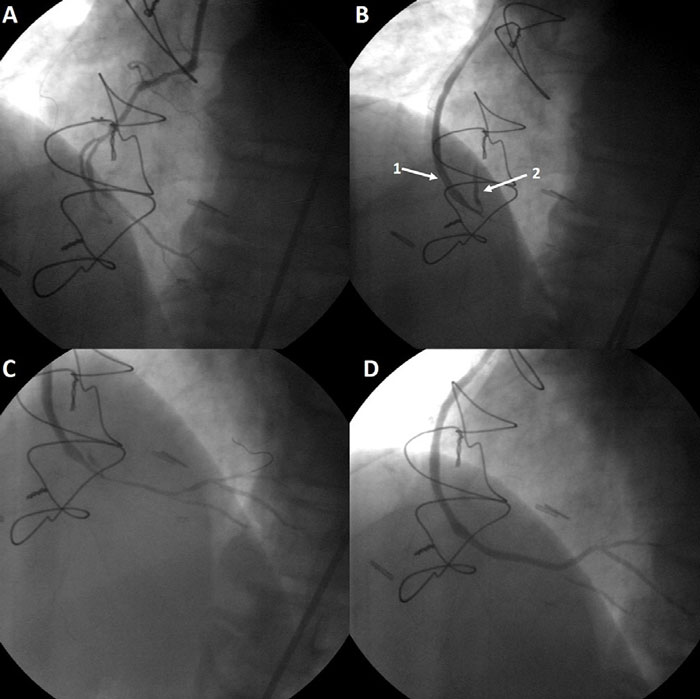 Figure 2: Coronary angiography images showing A) the right coronary artery (RCA) with total occlusion in the mid-segment, B) the vein graft to the RCA (arrow 1) and retrograde flow to proximal RCA (arrow 2), C) the distal RCA after wiring through the graft and predilatation, and D) the final result after stenting.

Case 3: A 55-year-old man, current smoker, with a history of dyslipidemia, previous myocardial infarction, and CABG five months before, was referred due to accelerated angina. Coronary angiography revealed severe stenosis in the mid-segment of LAD at the site of the anastomosis to LIMA graft, which was totally occluded (Figure 3). Ad hoc PCI at the native vessel was decided. Angioplasty was performed with the use of a 2.0 × 15 mm Maverick balloon (Boston Scientific, MA, USA), inflated at 15 atmospheres. After balloon inflation, angiography revealed an extensive dissection of LAD starting from the site of the anastomosis and extending distally with blood flow of TIMI grade 0-I. No stent implantation was performed due to failure reaching the dissection with the coronary stents, although a guide extension catheter (Guidezilla 6Fr, Boston Scientific, MA, USA) was used. No further action was taken, and the patient was admitted to the Coronary Care Unit, where he was hospitalized for a type 4a myocardial infarction. He was discharged four days later.

Figure 3: Coronary angiography showing A) severe stenosis in the mid-segment of the left anterior descending artery (LAD) at the site of the anastomosis to the left internal mammary artery (arrow), and B) the final result with extensive LAD dissection and flow limitation (TIMI 0-I).

Case 4: A 61-year-old woman, ex-smoker, with a history of arterial hypertension, dyslipidemia, obesity, and previous CABG three months earlier, was referred to our department due to accelerated angina. Coronary angiography revealed severe stenosis in the proximal segment of LAD, a subtotal occlusion at the site of LIMA anastomosis, and a subtotal occlusion at the mid-segment of RCA. Also, two vein grafts were severely diseased: a vein graft to the first obtuse marginal artery had severe stenosis at the proximal segment, and a vein graft to RCA was totally occluded. We decided to proceed to ad hoc PCI with the vein graft to the obtuse marginal and elective PCI with native LAD. The vein graft PCI was performed without any complications. After two weeks, the LAD PCI was performed with the use of rotational atherectomy (1.25 and 1.5 mm burr) before adequate balloon expansion in the proximal part of the vessel. The middle part of the vessel, at the site of distal graft anastomosis, was also dilated with a 2.5 mm Maverick balloon (Boston Scientific, MA, USA). Two overlapping drug-eluting coronary stents were deployed from LAD ostium. The site of distal graft anastomosis was left without stent deployment (POBA only) due to small vessel size (less than 2.5 mm) and the absence of significant dissection (Figure 4). The RCA PCI was performed one month later with the use of rotational atherectomy before stent implantation.

Figure 4: Coronary angiography images showing A) severe stenosis in the proximal segment of the left anterior descending artery and subtotal occlusion at the site of the anastomosis to the left internal mammary artery, B) the balloon angioplasty at the site of distal anastomosis, and C) the acceptable angiographic result after rotational atherectomy and stenting of the proximal part.

Case 5: A 57-year-old man, current smoker, with a history of arterial hypertension, diabetes mellitus type II, dyslipidemia, LAD PCI 10 years ago, and CABG six months before, was referred to our department due to unstable angina and left ventricular dysfunction (ejection fraction 35 %). Coronary angiography revealed a chronic total occlusion of LAD and LIMA graft at the site of their anastomosis. The native RCA and circumflex artery were totally occluded, while a vein graft to the first obtuse marginal artery was patent and functioning. Myocardial viability of the anterior wall was confirmed by dobutamine stress echocardiography. An elective LAD PCI was decided. The wiring of the distal vessel was achieved with the use of a Gaia 2nd wire (Asahi, Japan). Predilatation was performed with increasing sizes of Maverick balloons (Boston Scientific, MA, USA) and the procedure was completed with the implantation of two overlapping Resolute Integrity coronary stents, of which the second one, sized 2.5 x 30 mm, was the one inflated at the site of the anastomosis at 15 atmospheres. Post-intervention angiography revealed an excellent result (Figure 5).

Case 6: A 72-year-old woman, ex-smoker, with a history of arterial hypertension, diabetes mellitus type II, dyslipidemia, and CABG 30 days earlier, presented for coronary catheterization due to recurrence of angina few days after surgery. Coronary angiography showed a subtotal occlusion of proximal LAD and severe stenosis at the anastomosis of LIMA to LAD. An elective PCI at the anastomotic site through the LIMA was decided due to the extreme tortuosity of the native LAD. The angioplasty was performed transfemorally with a 7Fr JR4 guide (Boston Scientific, MA, USA). Predilatation was performed with a  2.0 × 15 mm Maverick balloon (Boston Scientific, MA, USA) inflation, followed by the implantation of a Promus Premier coronary stent (2.5 × 18 mm), inflated at 15 atmospheres. Post-intervention angiography showed an acceptable result, with no residual stenosis (Figure 6).

Figure 6: Coronary angiography showing A) severe stenosis at the anastomosis of the left internal mammary artery to the left anterior descending artery (arrow), and B) the nice result after stenting.

Graft failure in patients who have recently undergone CABG is not an uncommon situation. Recent data from the PREVENT IV trial show that graft failure, 12 to 18 months post-CABG, occurs in 25.2 % of vein grafts and 8.6 % of internal mammary artery grafts6,7. Several possible mechanisms contribute to graft failure, depending on the time interval after CABG. Early failure is predominantly attributed to acute thrombosis, mainly due to technical factors or conduit-related factors (e.g., mismatching conduit size or preexisting graft pathology), or because of extrinsic situations such as hypercoagulability. In the first months after surgery, neointimal hyperplasia may present initially at the anastomotic sites and become generalized in the following period. Atherosclerotic degeneration is the main factor that causes graft failure during the late period (more than 12 months after surgery)8,9.

Treatment options for graft occlusion include percutaneous balloon angioplasty, percutaneous stenting, and redo-CABG10. Redo-CABG is associated with a high mortality rate11. On the other hand, PCI at grafts, especially at vein grafts, is challenging because of the high rate of periprocedural myocardial infarction and restenosis12, whereas the risk of perforation is not negligible13. The intervention of distal anastomosis can be even more troublesome because recent surgical anastomosis response to balloon inflation and stent implantation is not predictable. Balloon angioplasty may be the selected approach in some cases and has been associated with better14,15 or at least equal16 long-term outcomes compared to stenting, in several studies. Recently, the successful use of paclitaxel-eluting balloons on distal anastomoses has been reported, with favorable short-term angiographic and clinical outcomes10.

The distal anastomosis lesions can be tackled from both the native vessel and the graft. In our case series, three procedures were performed from the graft and three from the native vessel, although PCI of the native vessel in cases of graft failure is associated with better outcomes17. This occurred due to anatomic characteristics of the native vessel that could negatively influence the results of the procedure (chronic total occlusion, extreme calcification, extreme tortuosity). Remarkably, all cases performed through the native vessel were complex interventions: Case 3 was a failed procedure that led to periprocedural myocardial infarction, Case 4 was performed with the utilization of rotational atherectomy, and Case 5 was a chronic total occlusion (CTO) procedure. Four cases were treated with stent implantation, whereas in two patients (33 %), plain balloon angioplasty was the chosen procedure. Drug-eluting balloons were not used due to limited availability in our Catheterization Laboratory. Post-intervention angiography revealed a variety of outcomes, which ranged from failures to optimal. This variation can be attributed to the heterogeneity of the cases concerning the morphology of the lesions and the differences between treated vessels: vein grafts, LIMA grafts, and native vessels. Culprit lesion presentation at recent distal graft anastomosis was a significant reason for a more conservative approach in terms of balloon/stent size and inflation pressure. The tension created by recent suture application may increase the risk of vessel perforation or lead to a stent-uncrossable lesion, with plain balloon angioplasty at low inflation pressure being a lower-risk alternative.

In conclusion, percutaneous coronary intervention at distal graft anastomotic lesions is challenging, it can be performed from either the graft or the native vessel, and the angiographic result may not always be optimal.