Background: Autophagy is an inducible intracellular process that has been studied mostly in cancer and less in inflammatory diseases. To establish the relation between cholecystitis (calculous and acalculous) and autophagy, we studied the expressions of immunohistochemical markers Beclin-1, LC3A, and Ki-67 in gallbladder epithelium and their significance in the induction of autophagy.

Cholelithiasis is a common disease in the western population, causing cholecystitis, occurring mostly in aged and female patients. Significant risk factors for cholelithiasis include gallbladder hypomotility, hyperlipidemia, obesity, and total parenteral nutrition. The gallstone disease is accompanied by inflammation of the gallbladder epithelium, mainly due to irritation and chemical injury1. More frequent gallstones in the western population are cholesterol stones. The physicochemical basis of cholesterol gallstone formation in humans is well studied. Lithogenesis is a multifactor procedure, which was initially researched by Admirand and Small in 19682. Inflammation, infection, and hypoxia constitute situations that promote autophagy. Contrariwise, the first breakthrough in autophagy research was made in the early 1990s3.

Autophagy is an inducible intracellular process, which is involved in cellular homeostasis, recycling, and removal of damaged organelles and intracellular pathogens, promoting cellular viability. In order to be maintained, tissue integrity and function need appropriate cellular stress response1. Autophagy is regulated by specific proteins, which are coded as autophagy-related genes4-6.

The autophagy expression markers LC3A, Beclin-1 are related to chronic inflammation conditions, such as asthma7, which enhances the evidence of correlation of autophagy with inflammation. Currently, there are no previous studies that relate inflammation with the three immunohistochemistry markers studied here. The study of autophagy-related proteins LC3A and Beclin-1 and proliferation marker Ki-67 expression in calculous and acalculous human gallbladder epithelium will enhance this hypothesis furthermore.

Beclin-1 is the first mammalian autophagy identified modulator and maybe the main target that is activated or deactivated in order to coordinate autophagy proteins with the needs of the cell to enhance or suppress autophagy in a context-dependent manner9,10. The role of Beclin-1 expression in cancer is still questioned. Recent studies maintain that autophagy suppresses tumor formation, while other researchers suggest that autophagy enhances tumorigenesis. Beclin-1 is highly expressed and constitutes a non-dependent biomarker associated with a better prognosis in gallbladder cancer11.

The Ki-67 antigen is a nuclear protein and is expressed in every active phase of the cell cycle. Ki-67 is absent in non-proliferating cells. During interphase, the antigen can be detected in the nucleus, whereas in mitosis, most of the protein is transported to the surface of the chromosomes. The antigen is degraded as the cell enters the non-proliferated state, and there is no expression of Ki-67 during DNA repair processes. Therefore, it constitutes a possible autophagy index.

We investigated the expression of Beclin-1, LC3A, and Ki- 67 in specimens of calculous and acalculous gallbladder epithelia in order to compare the expression of these immunohistochemical biomarkers and find their correlation with calculous cholecystitis and autophagy.

Our prospective study was conducted at Democritus University of Thrace (DUTH) Medical School, in the University Hospital of Alexandroupolis, Greece, during the period from 2016 till 2019. Ethical approval for the research protocol was obtained from the Ethical and Scientific Committee of the Institution (decision No 306, date: 12/04/2016).

Human gallbladder full-thickness specimens were obtained from 100 patients (45 male, 55 female) who underwent cholecystectomy. The patients were not consecutive and were selected according to the degree of inflammation. The gallbladder tissues were examined in the Pathology Laboratory of DUTΗ. The patients were divided into two groups: group A (calculous gallbladder group: 24 male, 46 female; mean age 52.6 ± 16.0 years); and group B (acalculous gallbladder group: 21 male, nine female; mean age 65.3 ± 12.4 years). Tissue specimens were fixed in formalin solution 10 % and embedded in paraffin (FFPE).

Tissue blocks containing material from the body of the gallbladder were retrieved from the archive of the Department of Pathology of our University Hospital. Three µm sections were cut from all FFPE blocks and mounted on positively charged glass slides. Immunohistochemistry for Beclin-1, LC3A, and Ki-67 was performed on serial sections. The whole immunohistochemical procedure was performed with the Envision Flex Kit (Dako Cytomation, Glostrup, Denmark). The slides were deparaffinized at 80 oC for 30 min, and then, the epitope retrieval procedure was carried out. Analytically, the sections were placed in citrate buffer (DAKO Envision Flex Target Retrieval Solution, 1:10 dilution, pH 6.0) and heated in a microwave oven at 97 oC for 3 x 5 min. Then, the slides were left to cool for 20 min. The sections were placed in tris-buffered saline (TBS) buffer for 5 min. Subsequently, the sections were incubated with the primary antibodies LC3A (1:20 dilution; overnight incubation; Abgent, San Diego), Beclin-1 (1:50 dilution; overnight incubation; Santa Cruz Biotechnology, Europe), and Ki-67 (ready to use; 60 min incubation; Dako Cytomation, Glostrup, Denmark). The slides were washed with tris-buffered saline (TBS) buffer for six min twice, and Endogenous peroxidase blocking was carried out using the Envision Flex Peroxidase-Blocking Solution (DAKO) for ten min. The slides were rewashed with tris-buffered saline (TBS) buffer for six min twice and incubated with Envision Flex, Mouse (Linker) as stabilizing protein. The slides were rewashed with TBS six min twice, and Envision Flex/HRP was applied for 30 min. Washing with TBS was repeated twice, and then, Envision Flex DAB+ Chromogen was applied for five min. Following that step, double washing was performed, and counter-staining with hematoxylin Q5 (vector) was performed for two min. Finally, the sections were washed once more with TBS, dehydrated through descending alcohol solutions in xylene and mounted in synthetic resin. All slices were evaluated without knowledge of the clinical outcome. Beclin-1, LC3A, and Ki-67 expression in the 100 cases were evaluated under an Olympus BX40 microscope (Olympus, Center Valley, PA). Staining was scored by two different observers.

Evaluation of the stained tissue slides was performed at x200 magnification, and all available tissue areas were inspected. The samples were selected based on the degree of inflammation, which was moderate to severe. Areas of metaplastic epithelium were seldom noted and were excluded from the assessment. Strong cytoplasmic expression of LC3A and Beclin-1 was taken into account to score each case. The Ki-67 proliferation marker was assessed as the percentage of epithelial cells with nuclear expression. The percentage of epithelial cells with strong cytoplasmic (for LC3A and Beclin-1) or nuclear (for Ki-67) staining was recorded, and cases were grouped as 0 =negative, 1 =low expression, 2 =moderate expression, and 3 =high expression.

Each immunostain was evaluated independently by two independent observers. Areas of regenerative epithelium expressed similar expression patterns with the rest of the gallbladder epithelium and were included together in the analysis.

As a positive control, we used tissue slides from colon carcinomas with known intense expression of LC3A, Beclin-1, or Ki-67. As LC3A and Beclin-1 proteins are poorly expressed in healthy tissues, there was no internal positive control to consider.

The R software (version 3.4.1) was used for statistical analyses. The results are presented as mean ± standard deviation (SD). Positive biomarker expression was determined when its value was higher than the median value, which was used as dichotomous. Chi-square test/Fisher’s exact test was used for the comparison of categorical/dichotomous variables. A p-value of ≤0.05 was considered significant.

The expressions of the three biomarkers in the tissues of the gallbladders were studied in the two groups. Ki-67 and Beclin-1 expression were higher in patients with calculous than acalculous gallbladder (Figure 1, Figure 2, Figure 3). 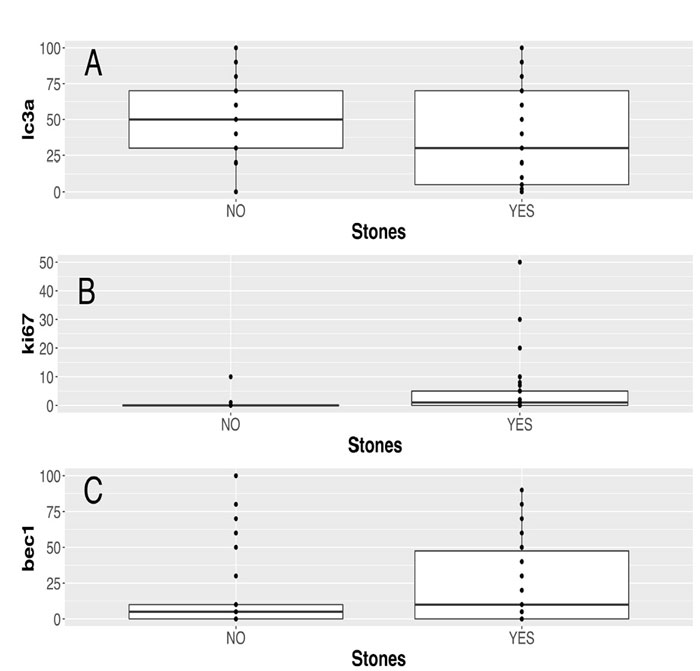 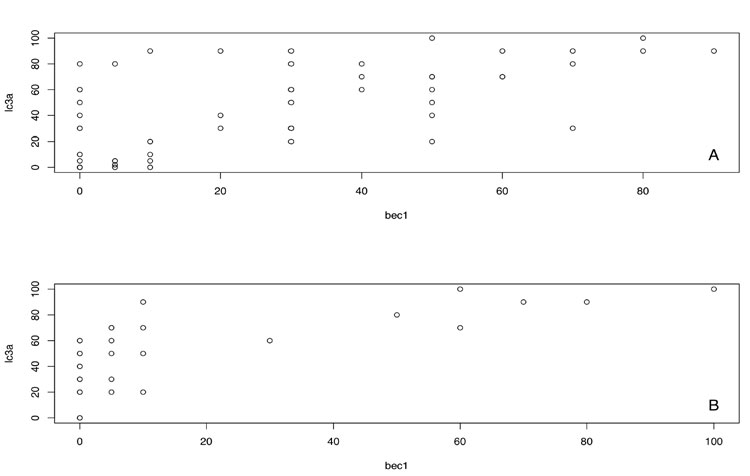 The expression of the third immunohistochemical markers Ki-67 was higher in group A patients compared to group B patients (Figure 4B; Table 3). In Table 3, positive biomarker expression was determined when its value was higher than the median value. Figure 1A shows that in group A, staining intensity with the Ki-67 antibody is more intense compared to Figure 1B (group B). The mean percentage of Ki-67 expression in group A patients was 3.75 %, whereas, in group B patients, it was only 0.5 % (statistically significantly different; p =0.0003). In group A, expression of Ki-67 >0.5 % was observed in 43 patients, and in group B in six patients (Table 3, Table 4).

Finally, we correlated the expression of Beclin1 and LC3A expression (Figure 5) using the chi-squared test/Fisher’s exact test in the two groups, as shown in Table 1.

The role of gallbladder epithelium in calculous and acalculous cholecystitis continues to present research interest. To our knowledge, this is the first study of the autophagy process in the gallbladder epithelium. The presence of autophagy markers Beclin-1, LC3A, and Ki-67 were examined using immunohistochemistry techniques in tissue samples from patients who underwent cholecystectomy with diagnosis cholecystitis.

Sivridis et al have shown that LC3A reactivity was recognized in cutaneous squamous cell carcinomas with diffuse cytoplasmic, “stone-like” structures (SLS), and cytoplasmic/perinuclear structures, that are rounded, large, amorphous densely stained material, enclosed within cytoplasmic vacuoles22,25. Previous studies have proved that LC3A follows the same pattern under stressed conditions25. This fact is confirmed by Giatromanolaki et al, who studied the LC3A and Beclin-1 expression in gastric cancer21. In our patients, both Beclin-1 and LC3A have shown cytoplasmic expression.

In the current study, the samples were selected based on the degree of inflammation, which was moderate to severe, and there was no staging of inflammation in another way, which is a limitation of our study. It was found that the epithelium of calculous gallbladder presents significantly higher Beclin-1 and Ki-67 expressions compared to the acalculous gallbladder epithelium, and LC3A presents a high expression pattern in both groups, which was characterized as a diffuse cytoplasmic pattern. To date, there is no other study of the three markers in the gallbladder epithelium in cholecystitis.

Autophagy expression has been related to chronic inflammation conditions, such as asthma in a mouse experimental model7. There is limited literature on the relation of chronic inflammation conditions and autophagy. This study presents for the first time in human gallbladder epithelium three autophagy immunohistochemistry markers comparing their expression with calculous and acalculous cholecystitis.

The fact that the mechanism of autophagic regulation plays an essential role in carcinogenesis and cancer therapeutics constitutes a mandatory necessity for the investigation of autophagy procedure in chronic inflammation conditions, which could potentially be neoplastic26. It has been studied that chronic inflammation is responsible for genetic and epigenetic diversions, which can be correlated with a higher possibility of tumor development in the calculous epithelium of the gallbladder27. Although autophagy is related to the inflammatory process, there is no clear evidence for its participation in this situation28,29.

The authors declare no financial interests and conflicts of interest regarding any of the products or methods used in this study. This research did not receive any specific grant or funding from agencies in the public, commercial, or not-for-profit sectors.