Background: Arthroscopic meniscus surgery can lead to pain at various levels. In this study, we aimed to compare, in patients undergoing arthroscopic meniscectomy under spinal anesthesia, the efficacy of the combination of magnesium sulfate and dexmedetomidine with local anesthetics administered intraarticularly for postoperative pain management

Methods: This prospective, randomized, controlled, double-blind study comprised of 52 patients who were randomly assigned into two groups depending on the combination injected intraarticularly at the end of the procedure: bupivacaine and dexmedetomidine (group D) or bupivacaine and magnesium sulfate (group M). Perioperative data, postoperative visual analog scale (VAS) scores, and total analgesic consumption were recorded.

Results: No statistically significant differences were found in mobilization times, rescue analgesic times, and non-steroidal anti-inflammatory consumption. The maximum mean VAS values at rest and during movement in group D were measured at the 6th hour while in group M peaked at the 8th hour.

Conclusion: Both intraarticular dexmedetomidine and magnesium sulfate, in combination with bupivacaine, have similar effects on reducing postoperative pain in arthroscopic knee surgery. HIPPOKRATIA 2019, 23(2): 51-57.

Arthroscopic meniscus surgeries are considered to be the most common day-case orthopedic procedures. Nevertheless, irritation of free nerve endings in the synovial tissue and anterior fat pads, as well as stretching and incision to the joint capsule, lead to pain at various levels1. Proper pain management enhances recovery and enables early rehabilitation. In published postoperative pain management guidelines, opioid-free analgesia methods are frequently emphasized, and multimodal treatment approaches such as local anesthetic infiltration are recommended2. In the treatment of postoperative knee pain, intra-articular (IA) drug injections are the most commonly used methods because of their minimal systemic adverse effects3. Drugs that are commonly administered intraarticularly included local anesthetics (bupivacaine, levobupivacaine, lidocaine), opioids (morphine, fentanyl), magnesium sulfate, steroids, and α2 agonists (clonidine, dexmedetomidine)4-6. In order to increase the effects and prolong the analgesic times of local anesthetics, various adjuvants are frequently used as an addition to the local anesthetics.

The aim of this randomized, controlled, double-blind study was to compare the efficacy of two adjuvants (magnesium sulfate and dexmedetomidine) combined with local anesthetics given IA for postoperative pain management in arthroscopic meniscectomy.

The Institutional Review Board approved this study protocol (KIA 2018/92, date: 20/2/2018), written informed consent was obtained from all subjects, and all procedures were conducted in accordance with the Helsinki Declaration of the World Medical Association and the ethical standards of the responsible committee on human experimentation. The study was registered prior to patient enrolment at www.ClinicalTrials.gov (NCT03479216).

From March to July in 2018, 52 patients aged between 18 and 65 years who were scheduled for elective arthroscopic meniscectomy for meniscal tear under spinal anesthesia with American Society of Anesthesiologists physical status I or II, were included in the study. The meniscal tear was diagnosed through a physical examination and with magnetic resonance findings. Patients who gained no benefit from conservative treatment were scheduled for arthroscopic surgery. The inclusion criteria included patients with stable knees, no knee arthritis, no axial malalignment, and no cruciate ligament injuries. Patients who had chondral lesions, and those who underwent meniscus repair were excluded from the study. Patients with renal or hepatic comorbidities and known neuropathy that could impede the assessment of pain scores, patients in whom surgery was not performed under spinal anesthesia for any reason (refusal, contraindication, or failure), and those who refused to participate were excluded from the study.

Block randomization was applied. After generating random numbers using Microsoft Excel, patients were randomly allocated into two groups. Following the randomization, 10 ml of the study solution was prepared by an anesthesiology nurse who did not take part in the study. The solution was injected intraarticularly following skin closure at the end of the surgery, ten minutes before the tourniquet release. All of the patients, surgeons, the anesthesiologist, the nurse following the patient postoperatively, and the investigators were blinded to the randomization sequence and the content of the injected drugs.

Following routine monitorization of non-invasive blood pressure, heart rate, and pulse oximetry, 12 mg of 0.5 % hyperbaric bupivacaine (with no adjuvants) was injected to the subarachnoid space for spinal anesthesia through a midline approach with the patients in the sitting position, after which the patients were positioned in the supine position. Surgery started following sensory block to pinprick at L1. All of the patients’ motor (Bromage scale) and sensory (pinprick) block levels were recorded at the end of the surgery.

All surgical procedures were performed by a senior surgeon in a bloodless surgical field with a pneumatic tourniquet inflated to 300 mm Hg. Partial meniscectomy was performed using two portals (anteromedial and anterolateral). None of the patients underwent knee surgery for bilateral legs. The surgery time was calculated from the first incision to the skin to skin closure.

The patients’ non-invasive blood pressures and heart rates were monitored in the orthopedics ward. Cold packs were administered to the operated knees. Visual analog scale (VAS) ranging from 0 (no pain) to 10 (the worst imaginable pain) was used for the postoperative pain assessment.

The VAS scores were assessed and recorded at the 4th 6th, 8th, 12th, and 18th hours by a nurse at the ward. Pain scores were measured during passive flexion (movement) and at rest. The duration of the motor block was recorded in minutes as the time from the spinal block to complete motor block recovery was obtained (Bromage scale =0).

No bladder catheterization was used. Patients were encouraged to continue their daily activities in the early postoperative period. The time of ambulation was calculated as the time from the patient’s entry to the ward to the first mobilization with or without the assistance of crutches.

Adverse effects such as headache, postoperative nausea and vomiting, bradycardia, and hypotension were noted. All patients were admitted to the hospital on the surgery day and stayed at the hospital overnight for postoperative follow-up. All patients were discharged from hospital in the morning of the following day (when they were able to void, had stable vital signs, had minimal or no pain, and could walk with or without the assistance of crutches)6. The hospital stay was no more than 24 hours.

Based on a previous study, the total sample size was calculated as 54 patients to detect one cm difference in VAS (α error: 0.05, 95 % power)7. Therefore 62 patients were recruited to compensate for possible dropouts. Statistical analyses were performed using the computerized statistical software IBM SPSS Statistics for Windows, Version 24.0 (IBM Corp., Armonk, NY, USA). The normality of the data distribution was analyzed using the Kolmogorov-Smirnov test. For continuous variables, the Mann-Whitney U test was used. For intergroup comparisons of categorical data, Fisher’s exact test or Pearson’s Chi-square test was applied. For intragroup comparisons of VAS scores, Wilcoxon’s signed-ranks test was used. All data are presented as mean ± standard deviation, median (min-max), or numbers (percent). A p-value <0.05 was considered to be statistically significant.

In the present study, 62 patients were analyzed for eligibility, and subsequently, ten patients were excluded (five declined regional anesthesia, four had comorbid diseases, and one failed regional anesthesia) (Figure 1). There were no statistically significant differences between the groups regarding the demographic characteristics of the patients and perioperative data (Table 1; Table 2). Although the mean mobilization time and non-steroidal anti-inflammatory drug (NSAID) consumption were higher in group D, and rescue analgesic time was longer in group M, these differences were not statistically significant. Eleven of the 26 patients in group D and 13 of the 26 patients in group M required no analgesics during their hospitalization. 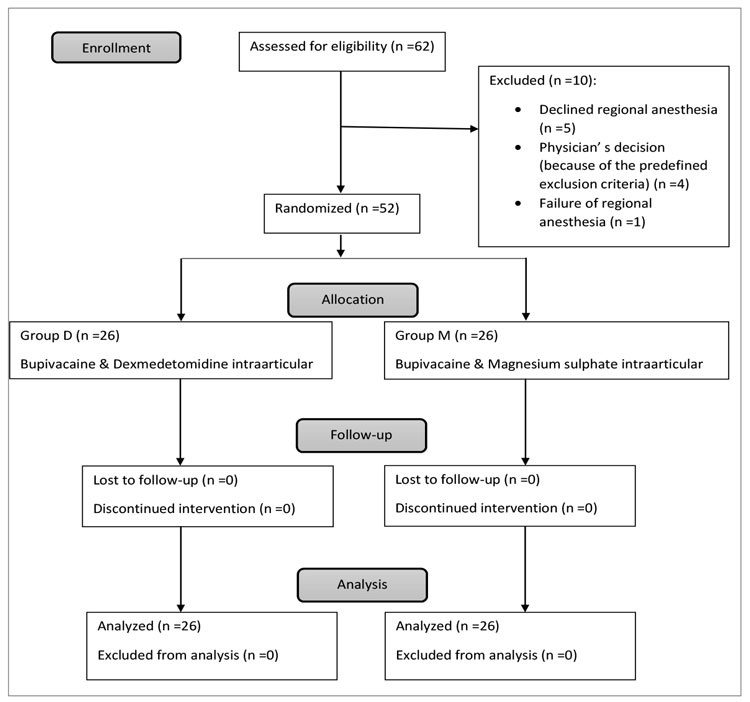 None of the patients encountered adverse effects such as headache, bradycardia, and hypotension during their hospitalization. There was only one patient in group M who had nausea and vomiting (following tramadol administration).

The main finding of the study is that the use of IA dexmedetomidine or magnesium sulfate as an adjuvant to bupivacaine (even in low volumes) reduced postoperative pain and analgesic consumption. The VAS scores peaked at the 6th hour in the dexmedetomidine group, and at the 8th hour in the magnesium sulfate group. These data show that dexmedetomidine (as an adjunct to bupivacaine) had a shorter half-life of elimination from the IA region than magnesium sulfate (as an adjunct to bupivacaine). However, pain scores did not differ between the groups at the 18th hour. Neither of these combinations offered an entirely painless period. Even though the pain scores were higher during passive flexion of the operated knee than at rest, the patients were comfortable in the first mobilization after surgery.

Although opioid-free anesthesia and analgesia methods have gained importance in recent times, there has been increased interest regarding non-opioid analgesic drugs and multimodal analgesia applications. IA local anesthetic injections have been used for pain management after knee surgeries8. In randomized controlled trials, IA combinations of local anesthetic with adjuvant drugs were found to be superior for postoperative analgesia compared to local anesthetic drugs alone4.

Dexmedetomidine is a selective, specific, lipophilic, and potent α2 adrenergic receptor agonist with sedative, anxiolytic, analgesic, antihypertensive, and sympatholytic effects4,9. The α2 adrenergic receptor agonists provide analgesic activity through both the central and peripheral nervous system8,10. Administration of IA dexmedetomidine provides analgesia mainly due to a direct local effect; however, systemic absorption cannot be excluded11. The most frequent adverse effects of dexmedetomidine include hypotension and bradycardia. However, these adverse effects have never been encountered with IA injections of this drug12,13. Magnesium sulfate is also an adjuvant drug that has a pivotal role in the nociceptive transmission and acts as an N-methyl-D-aspartate (NMDA) antagonist in spinal neurons2. Additionally, magnesium sulfate has anti-inflammatory and immunomodulatory effects and influences chondral regeneration positively14-16.

It is understood that the high-volume IA load can potentially cause patient discomfort24. On the other hand, it was indicated in a study that adequate analgesia could be achieved with a small dose of morphine with a large volume IA25. Besides that, the synergistic mechanism of action of local anesthetics and adjuncts provides the same effect with lower doses and also lower volumes of drugs in combination16. However, Joshi et al concluded that there was no advantage in combining bupivacaine with morphine26. The conflicting results of the studies conducted with morphine can be related to the low lipo-solubility of morphine, which affects potency, the onset of action, and duration of action. However, in our study, effective analgesia and lower analgesic consumption were acquired even with lower volumes and lower doses of dexmedetomidine or magnesium sulfate in combination with bupivacaine.

It was observed in this study that both dexmedetomidine and magnesium sulfate, in combination with bupivacaine, had favorable analgesic effects. At the same time, as an adjuvant, both helped to reduce the bupivacaine dose, which has well-known adverse effects on chondrocytes27. Dexmedetomidine had a shorter duration of action compared with magnesium sulfate. Nevertheless, both adjuvants showed similar and good analgesic effects in patients on discharge and provided a comfortable postoperative period. However, in view of our results, magnesium sulfate can be considered preferable because it is less expensive than dexmedetomidine.

The major limitation of this randomized, controlled trial is that there is no control group (a group of patients with bupivacaine only or placebo) to reach a useful conclusion about the effectiveness of the two compared adjuvants. The reason for not assigning a control group was that the superior analgesic effects of the magnesium sulfate and dexmedetomidine over placebo had been researched previously for individual adjuvant drugs; however, they have never been compared in a single study. Another limitation of the study is the short duration of postoperative follow-up. Thus, we could not evaluate the long-term positive and adverse effects of IA injections. More clinical trials are needed to determine the optimum volume and dosing for a specific drug.

In conclusion, both IA dexmedetomidine and magnesium sulfate, in combination with bupivacaine, have similar effects on reducing postoperative pain in arthroscopic knee surgery.

The authors received no specific funding for this work. This manuscript was presented as an oral presentation in Turkish Society of Anesthesiology and Reanimation 52nd National Congress, November 2018.