Background: In recent years, interscalene brachial plexus block (ISB) and selective supraclavicular nerve block (SNB) have been associated with successful outcomes in the treatment of fractures of the clavicle while avoiding complications.

Description of the case: A 67-year-old male sustained a fracture of his right clavicle following a fall. Regional anesthesia was favored for his treatment after obtaining informed consent as he would have been exposed to high risk if treated under general anesthesia due to his medical history of coronary artery disease and chronic obstructive pulmonary disease. Ultrasound-guided combined application of ISB and selective SNB were utilized with a low-dose local anesthetic without the occurrence of any intraoperative or postoperative complication.

Conclusion:  Low-dose ISB and selective SNB can be effectively and safely used for clavicular fracture treatment procedures, especially in patients who have a low pulmonary reserve. HIPPOKRATIA 2019, 23(1): 25-27.

Stabilization surgery is recommended for clavicular fractures as it results in a high surgeon and patient satisfaction and early mobilization1. Although regional anesthesia techniques such as the superficial cervical plexus blocks (SCPB), the combined SCPB and deep cervical plexus block, and the interscalene brachial plexus block (ISB) are utilized to provide anesthesia and effective postoperative analgesia for clavicular surgery2, existing data is not sufficient to enable favoring the best technique. The supraclavicular nerve originates from the C2-4 branches of the superficial cervical plexus and becomes accessible at the posterior border of the sternocleidomastoid muscle. It divides then into three branches with the lateral branch innervating the skin over the lateral aspect of the clavicle3. During arthroscopic shoulder surgery, selective supraclavicular nerve block (SNB) has been reported to decrease the pain radiating over the acromioclavicular region when administered concomitantly with ISB4.

The use of selective SNB, concurrently with a supraclavicular brachial plexus block, has been demonstrated to provide adequate anesthesia for clavicular surgery5. However, it has been reported that the amount of local anesthetic used and the complication rate could be decreased by increasing the block success rate, utilizing ultrasound (US), which becomes more common in the practice of regional anesthesia6. Herein, we present the successful application of ISB and selective SNB in the reported case as the sensory innervation of the clavicle is derived both from the cervical plexus and the brachial plexus7.

A 67-year-old male, 167 cm in height and 80 kg in weight, presented to the orthopedic outpatient department with a right distal clavicular fracture following a fall. Open surgery with internal fixation was planned by the orthopedist and the patient was referred to the anesthesia outpatient department. He was classified as ASA II due to the presence of coronary artery disease and chronic obstructive pulmonary disorder (COPD) and was referred to the chest physician and cardiologist for consultation. His pulmonary function tests recorded a forced vital capacity (FVC) value of 2.25 (73 %), forced expiratory volume in first second (FEV1) value of 1.57 (65 %), FEV1/FVC value of 69.8, and peak expiratory flow (PEF) value of 56 %. Surgery under general anesthesia was considered to confer a high degree of risk. His echocardiography demonstrated an ejection fraction of 50 % and left ventricular hypertrophy, indicating a moderate degree of risk. After obtaining informed consent, he was taken to the operating room without premedication and was decided to perform selective SNB in combination with ISB as he was in high-risk for general anesthesia. Standard monitorization was used (preoperative values: blood pressure 138/88 mmHg, heart rate 80/min, and SpO2 90 %).

The patient was placed in the left lateral position. After disinfection with an antiseptic solution, 2 ml of lidocaine 1 % was administered for local anesthesia in the skin and the subcutaneous area. The C5 root was identified with the US device (Mindray M5, UMT-200/China), placed in the nerve mode, using the 5-10 MHz frequency range and a linear probe, and then we scanned cranially to identify the superficial cervical plexus. Subsequently, the supraclavicular nerve was identified as a hypoechogenic structure 3-4 mm in its cross-section, in the plane between the posterior border of the sternocleidomastoid muscle and the scalenus medius muscle. A 22 G block needle, 50 mm in length (Stimuplex®Ultra 360®, Braun, Germany) was advanced in the posterior-anterior direction from the outer aspect of the sternocleidomastoid muscle (Figure 1), and 4 ml of 0.5 % bupivacaine was then administered with the in-plane technique to the fascia under the sternocleidomastoid muscle using intermittent aspiration (Figure 2). 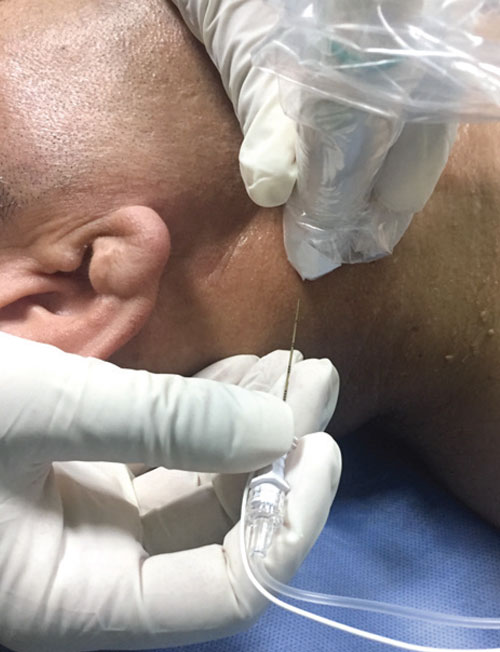 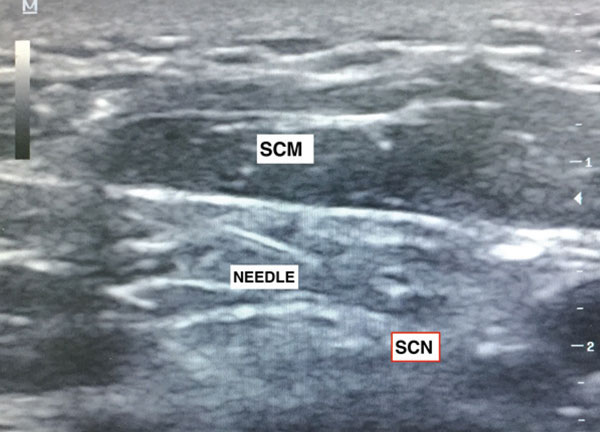 The patient’s head remained in the left lateral position, the skin area of interest was disinfected, and local anesthesia was administered as before. Using the same US device in the nerve mode and with 5-10 MHz frequency range, the linear probe was directed laterally from the midline in the transverse oblique plane at the level of the cricoid cartilage (C-6 level) (Figure 3). The brachial plexus structures were visualized as hypoechogenic circles between the anterior and medial scalene muscles (C5-7 roots). The 22 G block needle, 50 mm in length, was advanced from the posterior to anterior through the middle scalene muscle with the in-plane approach at this level with the tip of the needle positioned just lateral and posterior to the C7 root. Ten ml of 0.5 % bupivacaine was subsequently injected with intermittent aspiration, while the distribution around the trunci was observed with the US (Figure 4). 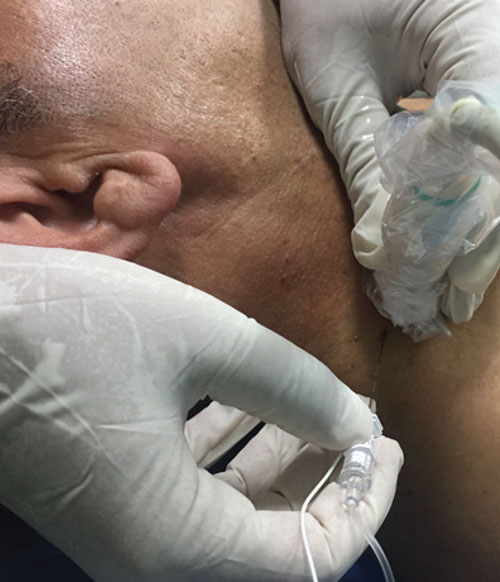 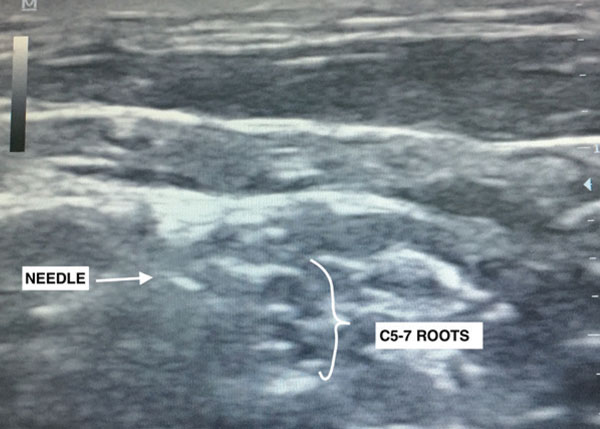 Figure 4: Ultrasound image of the interscalene brachial plexus block showing the needle advanced through the middle scalene muscle and its tip positioned just lateral and posterior to the C5-7 roots.

Motor block was evaluated with the Modified Bromage scale (0: no motor block, 1: no shoulder abduction, 2: no shoulder abduction or elbow flexion, 3: complete motor block). Sensory block was evaluated with the pinprick test over the C4-T1 dermatomes as 0: presence of pain sensation, or 1: no pain sensation. A pinprick test result of 1 and a Modified Bromage score ≥1 were considered to indicate adequate anesthesia and analgesia level. The surgery commenced 30 minutes later, and no deterioration was observed in the hemodynamic parameters in the five min sequential measurements of the vital signs. The surgery was completed in 90 minutes without the need for sedation or further analgesia administration. There was no complication such as Horner’s syndrome, phrenic nerve paralysis resulting in respiratory depression, or total spinal anesthesia. However, all necessary equipment was readily available should a complication was encountered. The patient was taken to the recovery room after the surgery and monitored for 40 minutes with vital signs follow-up every 10 minutes. The vital signs of the patient during transfer to the surgical department were: visual analogue scale (VAS) 0/10, SpO2 91 %, blood pressure 130/80 mmHg, and heart rate 86/min. During the first 12 postoperative hours, he did not require any analgesics.

The presented case is the first reported in the literature where low-dose ISB and SNB have been concomitantly used under US guidance. This method provided effective intraoperative and postoperative analgesia without leading to complications in a patient with limited pulmonary function.

Ultrasound-guided ISB and SSPB have been reported to provide effective intraoperative and postoperative analgesia and patient comfort for patients undergoing clavicular surgery8. However, these two techniques can cause problems in patients with decreased pulmonary reserve. Diaphragm paralysis and decreased pulmonary function can develop following ISB as a result of blockage of the phrenic nerve. The phrenic nerve is the motor nerve of the diaphragm and arises mainly from C4 but also receives contributions from C3 and C5. A successful block without phrenic nerve paralysis has been reported with ISB administered at the C7 level resulting in local anesthetic distribution to the C5-6 roots as well9. However, phrenic nerve paralysis has been reported following superficial and deep cervical plexus blocks in the literature10. We utilized low-dose ISB and selective SNB in combination at the C7 level to prevent the respiratory depression that would have been caused by phrenic nerve paralysis as a result of the applied cervical plexus and interscalene blocks. US-guidance enables better localization and prevention of complications by avoiding injury to the surrounding vascular structures along with reduced local anesthetic volume used for the block8.

In conclusion, low-dose ISB and selective SNB can potentially be effectively and safely used for clavicular fracture treatment procedures, especially in patients who have a low pulmonary reserve.

None declared by the author.