Signal peptide-CUB-EGF-like domain-containing protein 1 (SCUBE1) is a protein that plays an important role in inflammation and thrombosis and is expressed in the vascular endothelium1. SCUBE1 is also highly expressed in human platelets2. It is stored in the α-granules of inactive platelets, which are translocated to the surface upon activation2. SCUBE1 has been shown to enhance ristocetin-induced platelet agglutination and adhesion2.

SCUBE1 has been shown to be elevated in patients with acute coronary syndrome and ischemic stroke3. Higher SCUBE1 levels have been demonstrated in an experimental model of acute ischemic stroke and acute mesenteric ischemia4,5. This leads to plasma SCUBE1 being considered a potential biomarker of platelet activation in acute thrombotic disease.

In patients with multiple myeloma, the incidence of venous thromboembolic events (VTE) such as deep venous thrombosis of the lower extremities, pulmonary embolism, and catheter-related upper extremity thrombosis has been shown to increase6. The risk of VTE is at least 10 % in multiple myeloma patients during their disease history7. Furthermore, the risk of arterial thrombotic events, such as acute myocardial infarction and ischemic stroke, increases concurrently in these patients8. A specific laboratory test is not available at present to accurately identify the risk of arterial thrombosis. In the current study, we aimed to determine the correlation of SCUBE1 level and the risk of thrombosis in patients with newly diagnosed multiple myeloma.

This is a prospective cross-sectional study that enrolled 32 newly diagnosed multiple myeloma patients that attended the Hematology outpatient clinic, of Recep Tayyip Erdoğan University, Training and Research Hospital, in Rize, Turkey during 2014. Multiple myeloma was diagnosed according to the international myeloma working group (IMWG) criteria. The patients were classified according to the Durie-Salmon staging system. The control group consisted of 41 healthy individuals.  In both groups, the exclusion criteria included a previous diagnosis of hypertension, coronary artery disease, stroke, cancer, and the use of aspirin and/or other antiplatelet drugs.

The study adhered to the tenets of the Helsinki Declaration, and approval was obtained by the local Ethics Committee of the Recep Tayyip Erdoğan University, Medical Faculty (decision No: 2014/124). The patients and controls were required to read and sign an informed consent form.

Peripheral blood samples were taken from all participants into tubes containing Sodium citrate after overnight fasting. The samples were centrifuged within one hour at 1,000 g for 15 min, and the separated plasma was stored at -80ºC.

Statistical evaluations were made using the IBM SPSS Statistics for Windows, Version 21.0 (IBM Corp., Armonk, NY, USA). Constant variables are expressed as mean ± standard deviation. Student’s t-distribution was employed in the comparison of the two groups. The relation between the variables was studied with Pearson’s correlation coefficient. A p-value of less than 0.05 was regarded as statistically significant. 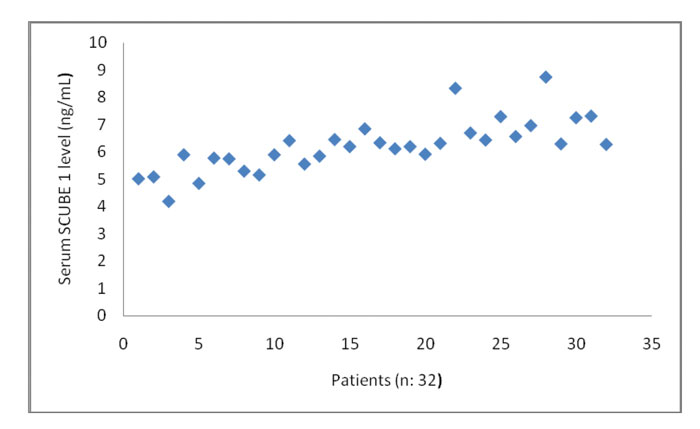 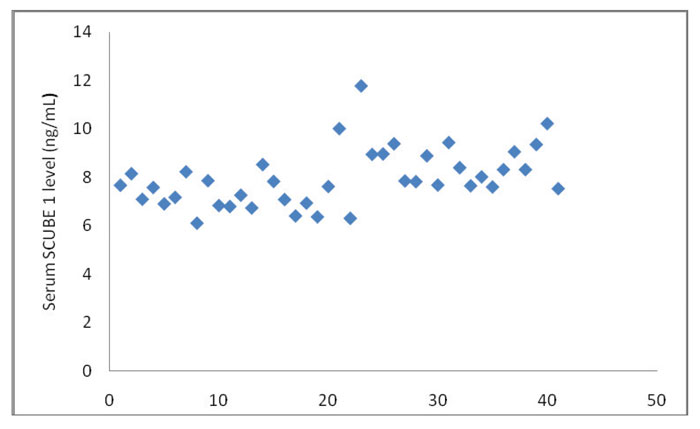 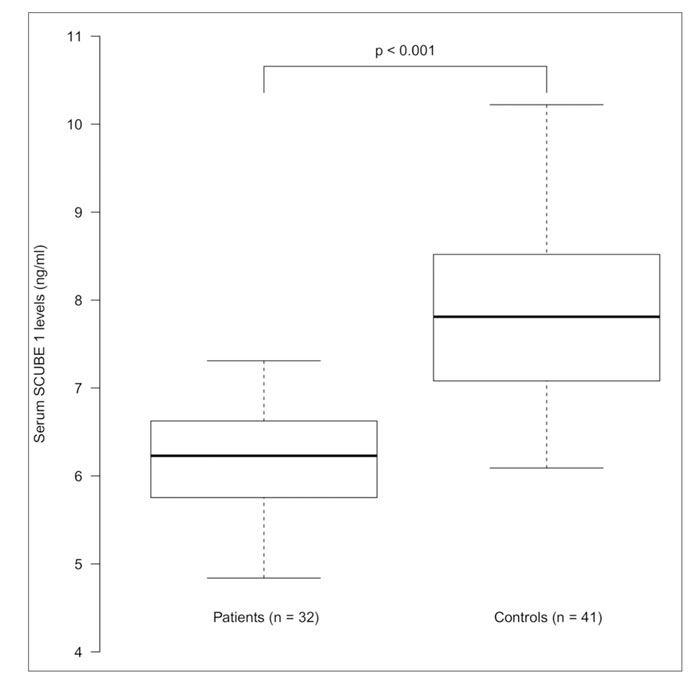 Figure 3: Graph comparing the SCUBE1 levels in the multiple myeloma patients and those of the control group.

SCUBE1 is a cell surface protein expressed during early embryogenesis and found in vascular endothelium and human platelets9. SCUBE1 is also detected in thrombus and atherosclerotic plaque10.

Patients with multiple myeloma may face various clinical conditions, such as renal failure, anemia, bone lesions, and infections. Furthermore, these patients also have an increased risk of venous and arterial thrombosis6. The risk of venous thromboembolism is highest during the first year following diagnosis7. This risk increases further with the use of immunomodulatory drugs, corticosteroids, and chemotherapy11.

In patients with multiple myeloma, the incidence of arterial thrombotic complications such as acute myocardial infarction and ischemic stroke increases concurrently with that of venous thromboembolism7,8. Likewise, monoclonal gammopathy with undetermined significance (MGUS) increases incidence13. An increase in the risk of both arterial and venous thrombosis is suggestive of several mutual biological factors such as platelet activation. This perspective is supported by the use of aspirin for the prevention of venous thrombosis in multiple myeloma patients14.

SCUBE1 has been studied in a number of malignancies, such as renal cell, gastric, and breast cancers, in which higher levels were reported compared with healthy controls15-17. In these studies, increased SCUBE1 levels were attributed to the hypercoagulable state of patients with cancer.

SCUBE1 is present in the α-granules of platelets. Patients with multiple myeloma present with platelet disorders such as impaired adhesion and aggregation capacity, reduced platelet factor 3 release, delayed clotting reaction, and abnormalities in platelet metabolism18. The coating of platelets with paraproteins was held responsible for these events18. Abnormal platelets generated from malignant megakaryocytes may also be another cause. A reduction in the half-life of platelets was also observed in these patients18. So, low SCUBE1 levels in multiple myeloma patients may be associated with platelet disorders.

Impaired renal function is known to cause platelet dysfunction19. In our study, higher creatinine levels were found in patients compared with the controls. In addition, platelet count was lower in patients than controls. These two findings may be related to low SCUBE1 levels in multiple myeloma patients.

In addition to the α-granules of platelets, SCUBE1 expression in vascular endothelial cells was shown to be reduced following in-vitro tumor necrosis factor-alpha (TNF-α) treatment1.  As one of the inflammatory cytokines that increase in multiple myeloma is TNF-α, this may account for the lower SCUBE1 levels found in our study.

The limitations of the current study include failure to assess platelet disorders in multiple myeloma patients, the small study population, and the lack of an additional group with MGUS, which could provide more information on SCUBE1 across the myeloma spectrum.

The authors declare that there are no conflicts of interest.

No funding was received from any source. The cost of all procedures mentioned in this study are state-funded.