Background: Experimental and clinical studies have shown the cardio-protective, anti-inflammatory, and anti-atherosclerotic actions of vitamin D.

Material and Methods: We aimed to investigate a possible correlation between vitamin D status and heart geometry using echocardiographic parameters of the left ventricle in youngsters with type 1 diabetes mellitus (T1D). Seventy-eight pediatric patients (aged 13.47 ± 2.86 years) with T1D of more than two years duration and 74 healthy controls (aged 12.04 ± 2.79 years) were enrolled in this case-control study. Anthropometric parameters were recorded, vitamin D and parathormone serum levels were measured, and trans-thoracic echocardiographic study was performed.

Results: Vitamin D deficiency was found in 74 % T1D patients and in 72 % of the controls, while parathormone levels were normal in both groups. T1D patients presented significantly higher values of interventricular septal thickness at diastole (IVSD) compared to controls (0.76 ± 0.16 cm vs 0.71 ± 0.14 cm, p =0.043). All other echocardiographic parameters did not exhibit significant differences between patients and controls. The diastolic function of the left ventricle (LV) was normal in both groups. After sub-grouping, the participants according to the deficiency or not of vitamin D, only patients with T1D and low vitamin D levels had increased values of IVSD compared to controls (0.78 ± 0.17 vs 0.71 ± 0.14, p =0.008). Patients with T1D and normal vitamin D levels presented similar values of IVSD compared to controls (0.71 ± 0.12 vs 0.73 ± 0.15, p =NS).

Conclusions: Children and adolescents with T1D and normal vitamin D levels do not exhibit changes in LV dimensions or diastolic function, except for increased IVSD, compared to controls. Larger and longitudinal studies are required to confirm and consolidate this finding. HIPPOKRATIA 2019, 23(1): 9-14.

Vitamin D deficiency (VDD) has been reported to be associated with a variety of cardiovascular and metabolic disorders, such as hypertension, insulin resistance, metabolic syndrome, diabetes mellitus, peripheral vascular disease, and congestive heart failure9-15.  Studies in adults have shown that patients with type 1 diabetes (T1D) and VDD exhibit left ventricular hypertrophy and diastolic dysfunction16,17. Furthermore, substitution therapy with vitamin D has been reported to result in blood pressure reduction in humans and can also reverse cardiac hypertrophy in rats18,19.

These data support the existence of a possible mechanistic connection between VDD and cardiovascular disease. However, most studies focus on adults, and data on children and adolescents with VDD is limited. The aim of the present study was to investigate the possible correlation between serum vitamin D levels and echocardiographic parameters of the left ventricle (LV) in children and adolescents with T1D.

Seventy-eight consecutive pediatric patients (43 boys), with T1D (mean age of 13.47 ± 2.86 years), were enrolled in the case-control study during the same autumn-winter seasonal period. These young patients, attended the pediatric Diabetes outpatient unit, of the 4th department of Pediatrics of the Aristotle University of Thessaloniki, at “Papageorgiou” General Hospital, from October 2012 to March 2015. The inclusion criteria were: pediatric patients who suffered from T1D for more than two years, Caucasian race, age range between 7 and 18 years old, and negative family history for cardiac malformation or cardiac disease. The exclusion criteria for the study were the presence of obesity, acute illness, diabetic complications, as well as the administration of any medication other than insulin.

The control group consisted of 80 children/adolescents with normal weight [body mass index (BMI) <85th percentile for age and gender], who had volunteered or came from those who attended the general Pediatrics outpatient clinic. Three of them were excluded from the study due to hyperglycemia and three due to infection. Finally, seventy-four healthy children/adolescents (38 boys), with mean age of 12.04 ± 2.79 years, were enrolled. Acute or chronic disease, obesity, and T1D or other autoimmune diseases were the exclusion criteria for the control group.

A required sample size of 126 participants (63 for each group) was calculated (http://statulator.com/SampleSize/ss2M.html; sample size calculator for comparing two independent means) in order to achieve a power of 80 % and a level of significance of 5 % (two sided), for detecting a true difference of -0.1099 units in means between the study group and the control.

All participants underwent a systematic clinical evaluation, including anthropometric measurements, by the same pediatrician. BMI was calculated using the formula: body weight (kilograms)/height (meters)2. Blood pressure was measured with the participant in the sitting position, using the appropriate cuff size.

The study was approved by the Ethics Committee of the School of Medicine, Faculty of Health Sciences, Aristotle University of Thessaloniki (decision No 2, 23/3/2016) and informed written consent was obtained from all participants’ parents or guardians.

Continuous variables are expressed as mean ± standard deviation for normally distributed and as median (minimum-maximum in brackets) for non-normally distributed. Kolmogorov-Smirnov and Shapiro-Wilk tests were used to examine the normality of distributions based on the size of the groups under comparison. Comparison of variables between two groups was performed with either Student’s t-test for normally distributed, or Mann-Whitney U-test for non-normally distributed variables. Categorical variables among groups were compared using the chi-squared test. A comparison of means among three or more groups was conducted by one-way analysis of variance. For multiple comparisons, Bonferroni posthoc tests were applied, after correction for the level of significance. Correlation between variables was assessed by Spearman’s rank correlation coefficient. Data were analyzed using IBM SPSS Statistics for Windows, Version 19 (IBM Corp., Armonk, NY). All tests were two-sided, and α was set at 0.05.

Individuals with T1D presented significantly higher levels of IVSD compared to controls (0.76 ± 0.16 cm vs 0.71 ± 0.14 cm, p =0.043) (Table 2, Figure 1). All other mean values of echocardiographic parameters of the left ventricle did not exhibit significant differences between the two groups (Table 2). The diastolic function of the left ventricle was also normal in the two groups with no statistically significant difference (Table 2).

When participants were sub-grouped according to the presence or not of VDD, mean values of anthropometric and demographic characteristics did not differ between patients and controls. Comparing all the echocardiographic parameters, mean values did not differ significantly between children with or without VDD, except for IVSD (Figure 1). Patients with T1D had increased mean values of IVSD compared to controls only in the subgroup of low vitamin D levels (0.78 ± 0.17 and 0.71 ± 0.14, respectively, p =0.008). On the other hand, patients with T1D and normal vitamin D levels presented similar values of IVSD compared to controls (0.71 ± 0.12 and 0.73 ± 0.15, respectively, p =0.632). 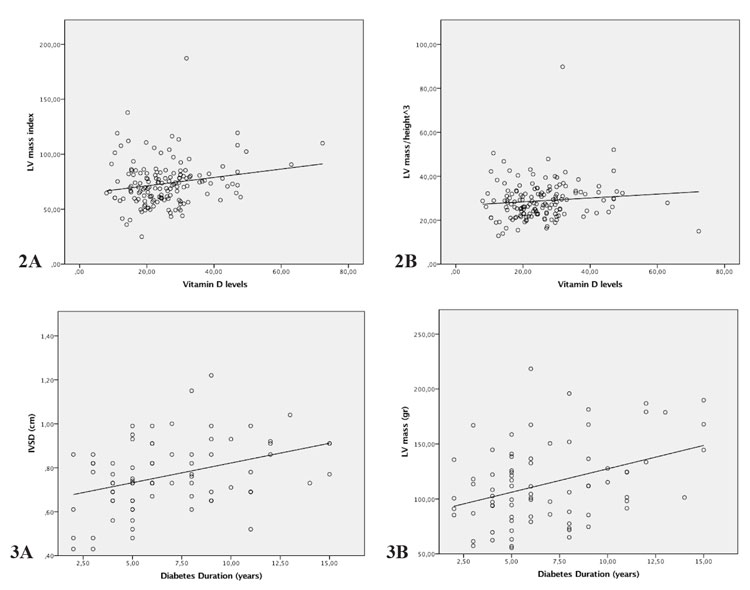 The present study shows that children and adolescents with T1D and VDD do not have changes in LV wall dimensions or diastolic function compared to controls, except for IVSD. Septal hypertrophy has been described as an early echocardiographic finding of left ventricular hypertrophy in childhood obesity23,24.

Although a correlation between VDD and diabetes in adults has been reported in multiple studies, there are only a few studies investigating the incidence of VDD in children and adolescents with T1D and its impact on cardiometabolic complications17,25-27.

In the present study, the prevalence of low vitamin D levels was similarly high between the groups of the overall cohort. This finding is in agreement with the study by Wood et al28. However, after the division of the participants into subgroups, it was revealed that low vitamin D levels were associated with a statistically increased mean value of IVSD only in children and adolescents with T1D compared with controls. This is a very interesting finding, but it should be confirmed by further larger studies.

Pandit et al also found that interventricular septal thickness was significantly increased in a group of VDD adult population compared to a group with normal vitamin D levels29. Another study in adults showed that patients with VDD had higher LVIDS, IVSD, LVPWD, and LV mass compared to patients with normal vitamin D levels30. The authors claim that VDD diminish the protective effect of vitamin D from fibrosis, myocardial thickening, and anti-apoptosis17.

Diastolic function of the LV was normal in our patients. This finding is consistent with previous studies in adults on the same topic27,29. Nevertheless, diastolic dysfunction has been described in young patients with T1D, using conventional and novel methods, such as tissue Doppler imaging31-35.

Contrary to diastolic function, LV systolic function was not reported to be impaired in most studies35. However, Di Cori et al using highly sensitive echocardiographic techniques demonstrated the presence of systolic dysfunction in young adults with well-controlled T1D36.

In the present study, there was neither systolic nor diastolic dysfunction. The above finding can be attributed to the participants’ sufficient glycemic control (since the 75th percentile of the HbA1c variable was 8.7 %), or to the short duration of the disease (in 75 % of the study population, disease duration was less than nine years). As a result, we did not find echocardiographic features of diabetic cardiomyopathy in our T1D patients.

Summarizing the results of the present study, we conclude that an incipient left ventricular hypertrophy could be a unique and early sign of cardiac structural changes, which could potentially lead to cardiomyopathy in children and adolescents with T1D and low vitamin D levels. Therefore, routine measurement of circulating vitamin D levels is recommended in T1D youngsters, not only to achieve good bone mass but also to avoid a potential early onset of cardiac dysfunction.

Authors would like to thank the patients (and their parents/guardians) for their participation in the study.