Background: Pulmonary hyalinizing granuloma (PHG) is a rare, benign disease of unknown etiology, characterized by single or multiple randomly distributed pulmonary nodules. Mediastinal or hilar lymphadenopathy is not a feature in the absence of concomitant infection.

Case report: We describe an interesting case of PHG in a 66-year-old woman who had multiple bilateral pulmonary nodules and hilar lymph nodes, which demonstrated mild to moderate fluorodeoxyglucose (FDG) uptake on the positron emission tomography (PET) scan. The hilar lymph node enlargement shown was due to anthracosis. The patient underwent wedge resection, and histopathological examination confirmed the lesion to be PHG.

Conclusion: PHG is a benign fibro-sclerosing disease that should be in the differential diagnosis of multiple pulmonary nodules, which may exhibit FDG uptake. Histological examination of appropriate specimens is required to establish an accurate diagnosis of PHG. HIPPOKRATIA 2019, 23(1): 33-36.

Pulmonary hyalinizing granuloma (PHG) is a rare, benign disease that presents as slowly enlarging solitary or multiple pulmonary nodules and is characterized pathologically by whorled deposits of lamellar collogen1. No gender or racial predisposition has been shown, and age of occurrence ranges from 5 to 83 years2,3. Although its etiology remains unknown, the underlying cause is thought to be an exaggerated chronic immune response to the antigenic stimuli associated with various infections and immune-mediated conditions that affect the lungs. Specifically, associations have been reported with fungal and mycobacterial lung disease as well as with rheumatoid arthritis, sarcoidosis, Sjögren syndrome, and lymphoproliferative disease2,4. PHG is sometimes accompanied by extrapulmonary fibrous lesions at other locations (skin, tonsillar, subglottic area, pleural, optic nerve, pituitary gland, liver, joints, spleen, pericardium, and abdominal mass)2,5. Associations have also been made with some non-pulmonary pathologic conditions like idiopathic thrombocytopenic purpura, deep venous thrombosis, infection with the human immunodeficiency virus (HIV), multiple sclerosis, autoimmune thyroiditis etc2,3,6,7. The definitive diagnosis is established by histopathological examination of the lesion. They are usually reported as individual cases in world literature2,4.

Anthracosis is caused by the accumulation of carbon in the lungs due to repeated exposure to air pollution or inhalation of smoke or coal dust particles. Anthracosis often results in mediastinal nodal enlargement8. We present an interesting case of PHG that was diagnosed after numerous investigations with accompanying anthracotic hilar lymph nodes, which coexistence is thought to be coincidental.

A 66-year-old female was referred to our department with a non-productive cough and left side chest pain persisting over the preceding six months. Four months before, she was investigated for possible neurological disease in another hospital due to syncope and transient loss of consciousness. Her electroencephalogram and cranial magnetic resonance imaging (MRI) were reported as normal, and no neurological pathology was detected. Her chest radiograph demonstrated multiple bilateral pulmonary nodules. Bronchoscopy with bronchial mucosal biopsies was performed but was non-diagnostic. Gram stain and cultures were negative for microorganisms. At that time, she was referred to our department for further investigation.

She was a housewife and reported no history of autoimmune illness, tuberculosis, or smoking; she did not complain of significant symptoms such as dyspnea, hemoptysis, weight loss, arthralgia, or fever, while she denied any recent traveling or illegal drug use. On physical examination, no significant findings were found, while the routine blood tests showed no pathological findings. The sputum smears were negative for acid-fast bacilli (AFB). Her pulmonary function tests, electrocardiography, and echocardiography were normal. There were multiple bilateral, randomly distributed parenchymal nodules measuring up to 4 x 3 cm and left hilar lymphadenopathy in the chest computed tomography (CT) (Figure 1). Her serology test results were negative or normal, including antinuclear, antineutrophil cytoplasmic, phospholipid, and anti-mitochondrial antibodies, anti-double-stranded deoxyribonucleic acid, anti-Ro (SS-A/B), and Jo 1 antibodies, anti-smith, ribonucleoprotein, and anti-smooth muscle antibodies, rheumatoid factor, and angiotensin-converting enzyme. HIV enzyme-linked immunosorbent assay test was negative. 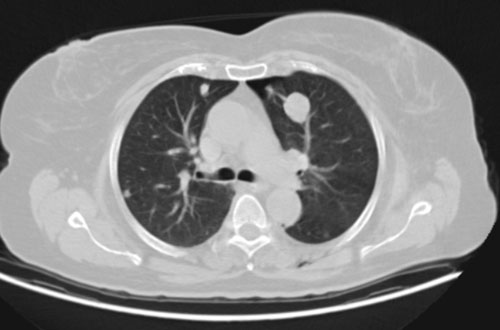 A positron emission tomography-CT (PET-CT) showed multiple fluorodeoxyglucose (FDG) avid nodules with maximum standardized uptake value (SUV max) of 7.12 in both lungs, and FDG avid left hilar lymph node (Figure 2). No extra thoracic FDG avid primary was identified. The patient was suspected of having lung cancer, and a biopsy of the left hilar lymph node was performed guided by endobronchial ultrasound (EBUS). The pathologic examination was reported as anthracotic lymph node. Löweintein-Jensen culture of the bronchial lavage was negative for AFB. No fungus was identified with Grocott-Methenamine silver stain. CT-guided biopsy of the left upper lobe nodule yielded nonspecific fibrosis and chronic inflammation. 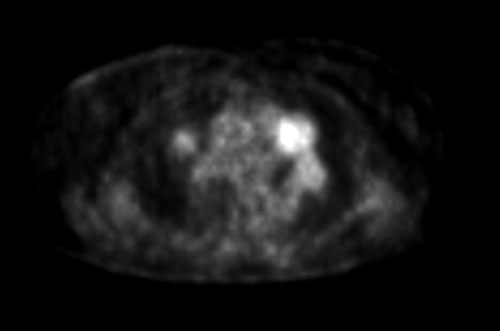 In an effort to obtain a tissue diagnosis, video-assisted thoracoscopy (VATS) was performed, and a wedge biopsy was taken from the left upper lobe. The pathologic examination revealed a lesion of dense acellular fibrocollagenous deposits in the pulmonary parenchyma (Figure 3A, 3B). It was observed that mononuclear cell infiltration was present in the periphery of the lesions, and the accompanying infiltrations in some places disrupted bronchial and vascular structures. Minimal calcification was seen in focal areas. Amyloid was not detected with crystal violet and Congo red stain. Pancreatin, epithelial membrane antigen (EMA), thyroid transcription factor-1 (TTF-1), Napsine A, actin, S100 protein, CD56, chromogranin, CD31, and CD34 immunohistochemically stains were performed. With Masson trichrome histochemical stain, the lesion’s fibrocollagenous nature was clearly seen and reported as PHG. (Figure 3C, 3D). 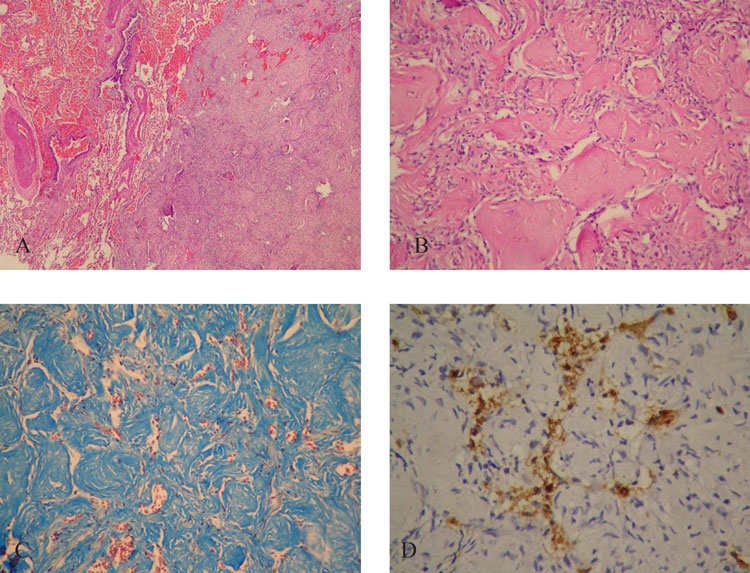 Figure 3: A) A lesion of fibrosculogenous deposits is seen in the lung parenchyma (Hematoxylin-eosin stain; x100); B) Higher magnification (Hematoxylin-eosin stain; x200); C) Masson-trichrome histochemical staining of the lesion showing more clearly the fibrocollagenous nature of the lesion; D) Immunohistochemically staining with Napsin A, showing the positive nature of alveolar structures.

PHG is a very rare, benign disease typically occurring in middle age, frequent active smokers2. The clinical symptoms of PHG are mild and nonspecific and may include a cough, fever, fatigue, dyspnea, and pleuritic chest pain. Up to 25 % of patients with PHG are asymptomatic at the time of presentation2,4. In the reported case, bilateral multiple pulmonary nodules were identified incidentally in chest radiography during the investigation of the cause of syncope. It was reported that she did not have any symptoms other than a mild cough and occasional chest pain.

Lhote et al, in their report, examined five new cases from different centers and reviewed 135 cases found in the literature between 1964 and 2015. They reported that 65 cases (46 %) had accompanying systemic disease (mainly mediastinal and retroperitoneal fibrosis, thromboembolism, autoimmune, tumoral, or infectious disease)2. Our patient did not demonstrate any clinical features or laboratory findings suggesting an infection, autoimmune process, or any other systemic disease.

The most frequent radiological finding of PHG is nodular lesions (93 %). In rare cases, a lung parenchyma infiltration or condensation is found alone or in association with nodules. Pulmonary nodules are often multiple, bilateral, and of various sizes on radiographs. Nodule sizes can vary from a few millimeters to several centimeters and may coalesce over time9. Solitary nodules are rare (29 %). Adenopathy is not a feature in the absence of a concomitant infection1,2,4,10. In our case, it was observed that adenopathy was due to anthracotic involvement.

PET-CT can help to rule out metastatic disease, although some cancers are not hypermetabolic on PET. Therefore, we performed PET-CT in order to investigate possible metastatic lesions in remote organs derived from metastatic lung cancer. Furthermore, some non-malignant conditions may cause increased activity on PET scans, as in our case. PET scans revealed hypermetabolism of the nodule in the 60 % of PHG cases2,11.

PHG must be included in the differential diagnosis of multiple pulmonary nodules, especially if nodule stability can be demonstrated and/or needle biopsies are non-diagnostic. Transbronchial fine needle aspiration biopsy, endobronchial sampling, bronchoalveolar brushing, and lavage are often not efficient for establishing a diagnosis2,4,11,12. Differentiation from malignancy and final diagnosis usually requires a surgical biopsy, as in our case.

The prognosis of PHG is generally considered to be good2,4,13. It has been reported that the prognosis of PHG with a single lesion is curable if the lesion is completely resected9. Some patients with multiple lesions may show progressive enlargement of the nodules2,4,14. The clinical course is usually self-limited, but 30 % of the patients will develop progressive inflammatory disease, with enlarged lesions and increasing dyspnea14. Due to the hypothesis of an infectious disease associated to PHG, antibiotics, antifungal drugs, and antitubercular therapy were given in several reports, but they were never effective2. This pathology usually does not requires treatment, but in patients with enlarging or compressive nodules, corticosteroids and other immunosuppressive and/or immune-modulator drugs may provide symptomatic relief and nodule regression2,5,15. In the study by Lothe et al, it was reported that out of 73 patients diagnosed with PHG, 19 patients were given corticosteroids; 8 of them showed a radiological improvement, eight patients remained stable, and three showed progression despite treatment. It was also reported that five patients were given at least one immunosuppressant drug besides their corticosteroid treatment, and four of them showed improvement2. We started to follow-up on our patient without any medication. There was no significant change in the size of the pulmonary lesions on the chest radiography or symptomatic deterioration during the 28 months follow-up period.

It should be kept in mind that PHG, is a rare benign disease that may cause metabolic activity involvement in multiple pulmonary nodules in PET-CT. Adenopathy is not an expected finding in PHG. A surgical biopsy is usually required for establishing a diagnosis. The anthracotic lymph node is probably coincidentally associated with PHG. It has been observed that the disease is stable without medication in patients with no obvious symptoms.

The authors declare that they have no conflicts of interest concerning this article.