Imaging examinations such as ultrasonography, computed tomography (CT), magnetic resonance imaging (MRI), and single-photon emission CT (SPECT) have been widely applied in clinical studies and animal experiments evaluating the liver morphology and quantifying the liver functional capacity after the development of hepatic cirrhosis4-7. Positron emission tomography/CT (PET/CT) is a practical tool in clinical practice that has been used for the diagnosis, staging, and prognostic evaluation of malignancies, and increasing attention has been paid to its application in infectious and inflammatory diseases8. 18F-2-fluoro-2-D-deoxyglucose (18F-FDG) is a common radiotracer used in PET that can provide quantified information on the glycolytic rate of organs or lesions in vivo8,9. Under normal condition, the uptake of FDG is diffuse and high in the liver. However, this diffuse FDG uptake may vary under different pathophysiological conditions10,11. Previous related studies have even shown controversial results in diffuse hepatopathies. Bural et al have found that the liver has a higher FDG uptake in patients with diffuse hepatic steatosis as compared with healthy controls12. Keramida et al held similar conclusions, although they found it was maximum standardized uptake value, not mean standardized uptake value (SUVmean) that showed this difference more obviously13-15. However, other investigators have shown that the occurrence and progression of hepatic steatosis have no significant influence on glucose metabolism by the liver16-18.

In consideration of this, we measured the overall glucose metabolism of liver on 18F-FDG PET/CT in patients with hepatic steatosis, chronic hepatitis B, and hepatic cirrhosis, and made a comparison with healthy controls. We aimed to evaluate global hepatic glucose metabolism quantitatively and found some possible imaging markers to diagnose and monitor these diffuse hepatopathies in clinics non-invasively.

We enrolled consecutive patients who underwent 18F-FDG-PET/CT for physical examination, tumor staging or further evaluation of liver diseases in our hospital from March 2016 to December 2016 and their 18F-FDG-PET/CT findings and clinical information were retrospectively reviewed. The study was approved by the Medical Ethics Committee of Zhongshan Hospital Xiamen University (decision No: 2016017, date: 04/03/2016). The exclusion criteria were i) intrahepatic space-occupying lesions, ii) concomitant liver diseases, iii) any history of liver surgery, iv) radiotherapy and/or chemotherapy within previous six months, and v) subjects with bad co-registration of PET and CT images in diaphragm due to motion artifacts. Among evaluated subjects, 45 subjects were excluded, and we finally enrolled into the study a total of 178 subjects, including 41 subjects with diffuse hepatic steatosis [the mean liver CT attenuation value was lower than the mean spleen attenuation value, negative blood test for hepatitis B surface antigen (HBsAg)], 50 subjects with chronic hepatitis [confirmed by histopathological results and positive blood tests for HBsAg, hepatitis B viral protein (HBeAg), and hepatitis B virus antigen (anti-HBC) with a history more than six-month], 36 subjects with hepatic cirrhosis (confirmed by histopathological results), and 51 healthy controls with normal liver function, negative HBsAg and no history of liver disease (the mean liver attenuation value was not lower than the mean spleen attenuation value). There is evidence that malignancy may not influence FDG uptake in the liver12, and thus extrahepatic malignancy was not excluded. The demographics of participants in each group are shown in Table 1.

Image acquisition and analysis after PET/CT

All examinations were performed on Discovery Elite PET/CT (GE Discovery PET/CT 690; GE Healthcare, Waukesha, Wisconsin, USA). Patients fasted for over six hours before the intravenous injection of FDG at about 6 MBq/kg. Before FDG injection, blood glucose was controlled at less than 150 mg/dl. PET/CT was performed from the top of the head to the mid-thigh with three-dimensional PET data collection and an axial CT slice thickness of 3.8 mm. The region of interest (ROI) was selected along the borderline of the liver in each axial CT image after exclusion of the liver hilum, inferior vena cava, and gallbladder on the accompanied workstation. After delineating all ROIs axially, one three-dimensional ROI was generated and further adjusted from the coronal and sagittal views accordingly. Thus, the hepatic volume (HV) and SUVmean were auto-generated based on this three-dimension ROI. The product of HV and SUVmean was global hepatic glycolysis (GHG =HV x SUVmean; cm3). ROI illustrations are shown in Figure 1. Each axial ROI for the same subject was delineated twice by one experienced radiologist with board certifications in both Nuclear Medicine and Radiology, and the average value for this two-time results was finally adopted.

Figure 1: Axial, coronal, and sagittal views of regions of interest (ROIs) delineating liver boundaries are drawn manually on every axial slice to calculate hepatic volume (HV) and mean standardized uptake value  (SUVmean) in a whole liver. The first row are 18F-2-fluoro-2-D-deoxyglucose-positron emission tomography (18F-FDG PET) of liver and the second row are fused images of PET and computed tomography (CT).

Statistical analysis was performed with the IBM SPSS Statistics for Windows, Version 19.0, (IBM SPSS, IBM Corp., Armonk, NY, USA). The mean and standard deviation of each parameter were calculated in each group. One-way analysis of variance was employed for comparisons of SUVmean, HV, and GHG among groups, followed by the Fischer’s least significant difference (LSD) test when a significant difference was preset. A value of p <0.05 was considered statistically different. A value of p <0.01 was considered significantly different. 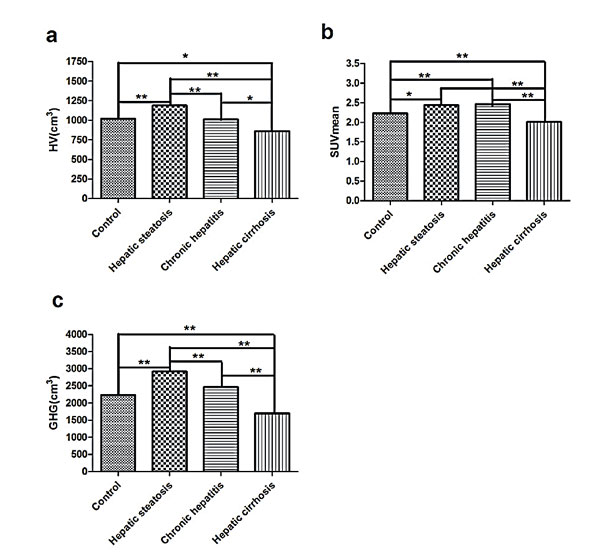 As known, there is dynamic progress from diffuse hepatic steatosis and hepatitis to hepatic fibrosis and eventually to hepatic cirrhosis. Histologically, hepatocytes may become swollen, and some matrix metalloproteinases may degrade the extracellular matrix to remove the fibrous tissues at early stages of diffuse hepatopathies, which is a compensatory process in the presence of hepatic steatosis or chronic hepatitis1. Anatomically, compensatory enlargement of the liver is present in the early stages and shrinkage in the liver volume may occur after cirrhosis, which is consistent with our findings for HV. However, our HV results showed that this enlargement was more apparent and possibly more compensatory for hepatic steatosis than for hepatitis. It was also expected that hepatitis and control groups showed no difference in HV, as morphology imaging markers can hardly differentiate hepatitis which may reflect more robust changes in liver function than in structure.

Currently, evaluation of liver function in patients with liver diseases is mainly dependent on blood test results. For hepatic cirrhosis, the Child-Pugh grading system and Model for End-Stage Liver Disease system, which both employ laboratory findings, are widely applied in the clinical practice. Increasingly, investigators proposed that both systems had limitations in the evaluation of the prognosis of patients with hepatic cirrhosis and needed to be improved19. Liver biopsy has been the gold standard in the diagnosis of diffuse hepatopathies; however, it is invasive and prone to sampling error, which significantly limits its wide application in clinical practice. Our study showed that use of SUVmean and GHG as imaging markers could reflect the liver glucose metabolism in patients with diffuse hepatopathies. We speculated that the development of a standard reference range for SUVmean and GHG would be helpful in the evaluation of liver function, on the basis of liver metabolism, which would allow accurate diagnosis and thorough assessment of diffuse hepatopathies, and possibly facilitate the clinical follow-up and prognosis estimation of patients with hepatic cirrhosis.

Hepatic steatosis and chronic hepatitis are common causes and reversible stages of hepatic cirrhosis. Our results accord with previous evidence which showed that the SUVmean and hepatic metabolism value products (similar to GHG in our study) in patients with diffuse hepatic steatosis increased as compared with those in healthy controls12-15. According to Bural et al, this increase of liver FDG uptake was ascribed to diffuse inflammation in the liver when hepatic steatosis occurred12. We herein doubt this explanation and suggest that compensatory liver function should meantime be highlighted based on the results in hepatic steatosis and hepatitis as highlighted in our study. Admittedly, the consistent increase in SUVmean for hepatic steatosis and hepatitis (compared to controls) is mainly ascribed to active inflammation in the liver12,15. However, increased GHG for hepatic steatosis without a difference in GHG for hepatitis (compared to controls) may reflect their different pathophysiological functional conditions with higher (for hepatic steatosis) and normal (for hepatitis) global liver metabolic functions. SUVmean, together with GHG, may indicate and differentiate hepatic steatosis, hepatitis, and healthy controls. Moreover, the obviously decreased SUVmean and GHG in patients with hepatic cirrhosis indicate their potential roles as imaging markers in evaluating hepatic cirrhosis, which is pathologically related with decreased hepatocyte metabolic function and relieving inflammation after the formation of pseudolobules and hepatic fibrosis. We speculate that the reduction of SUVmean is more ascribed to the fibrous tissue deposition with low metabolism in the liver, and that decreased GHG is more correlated to low glucose metabolism function of hepatocytes after cirrhosis20.

Previous studies have shown that radiotracers, such as 2-[18F]-fluoro-2-deoxy-D-galactose (18F-FDGal) and 8-cyclopentyl-3-(3-fluoropropyl)-1-propylxanthine ([18F]-CPFPX), can be used for the quantitative evaluation of the liver metabolism21-23. Currently, 18F-FDG is the most widely used radiotracer in clinical practice. Findings from studies on different tracers are consistent with ours, suggesting that it is feasible and scientifically valid to use measurements related to the liver metabolism to reflect liver pathology, and has potentially broad clinical applications21,22. In addition, hepatocytes are cells with an active metabolism, and there is focal heterogeneity in FDG uptake by the liver tissue10,11. Sorensen et al also found that, when compared with controls, the focal heterogeneity in liver FDG uptake increased in patients with hepatic cirrhosis21. Thus, SUVmean, together with GHG, was employed in the present study to evaluate the global liver metabolism functions under different pathological conditions. This is helpful in order to reduce sampling error and provide more accurate information than the evaluation of focal radioactive aggregation. GHG based on global liver metabolism is thus preferable to SUVmean, to reflect actual metabolic function by taking into consideration liver volume.

Our study had some limitations. First, the sample size was small, especially for hepatic cirrhosis. Group subdivisions should be made according to the course or the severity of different diffuse hepatopathies in a future study24. Also, hepatic fibrosis was not discussed in our study, which is a complicated and transitional process from hepatitis to hepatic cirrhosis. The criterion for staging hepatic fibrosis in pathology is wide and complicated. We speculate that imaging results of fibrosis in the early stage should be similar to those of hepatitis and that cutoff values for late-stage fibrosis should be merged into those of hepatic cirrhosis25. Our future dedicated analysis will focus on this field. Finally, this was a retrospective study, and information regarding changes in liver function was not available in these patients. That is, we failed to investigate dynamic changes in liver function in these patients. This will also be the focus of a future study.

In conclusion, increased SUVmean indicates increased FDG uptake in the liver during hepatic steatosis and chronic active hepatitis, which may be explained by hepatocyte inflammation. However, the difference between GHG in hepatic steatosis and chronic active hepatitis might indicate different liver metabolic functions. SUVmean and GHG are reduced in patients with liver cirrhosis, suggesting reduced FDG uptake and further global liver metabolic functions. This may be ascribed to the formation of pseudolobules and deterioration of hepatic fibrosis. Our study finally suggests that SUVmean and GHG can be taken as useful imaging markers to evaluate hepatic functional capacity in the diffuse hepatopathies.