Endemic malaria transmission in Greece is associated with the cosmopolitan and relatively benign Plasmodium vivax. Plasmodium falciparum, the main culprit for severe disease, is so far only sporadically imported in our country1. The pathogenicity of the latter is attributed to its property to induce intravascular cytoadherence resulting in complications such as acute renal failure, cerebral or dysenteric malaria. If such manifestations predominate the clinical picture, they could be diagnostically misleading. We report a tricky case of falciparum infection that caused initial diagnostic confusion.

A 65-year-old male, Israeli tourist, was urgently transferred to our hospital due to drowsiness and impairment in speech. Clinical examination revealed a lateral mouth droop, and he was admitted with a presumptive diagnosis of a stroke. Routine testing was significant for low platelets (62,000/μL) and impaired renal function (urea: 85 mg/dL, creatinine: 2.6 mg/dL). No laboratory evidence of anemia or hemolysis was present. Subsequent microscopy to confirm the thrombocytopenia uncovered the surprising presence of intracellular Plasmodium trophozoites whose phenotypic characteristics indicated a falciparum infection (Figure 1). A recently treated malaria episode was then reported by his companion, establishing recrudescence of a past infection as the most likely diagnosis. National public health authorities were informed, and treatment initiation was followed by prompt improvement. 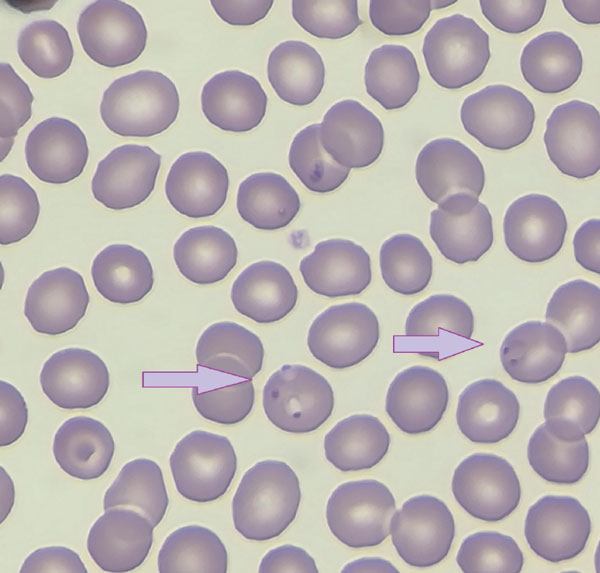 The role of population mobility in changing the epidemiology of infectious diseases is extensively discussed nowadays with war and poverty forcing people to move from disadvantaged areas to the most prosperous ones and international travel being an additional factor for population mixing. There is evidence that such movements have led to the establishment of neglected tropical diseases such as schistosomiasis or leishmaniasis to non-endemic settings in the past2. Whether this could repeatedly happen is for the most part unknown given that such diseases are characterized by rather complex epidemiology, depending on factors such as particular vectors, environmental conditions and behavioral patterns for successful transmission. Nevertheless, we do know that Anopheles mosquitoes exist in Greece and are associated with the endemic transmission of the far less pathogenic P. vivax. In any case, as the incidence of sporadic infections could be expected to increase, physicians should bear in mind that tropical medicine is a noteworthy, unique, and largely unexplored medical field.