Background: The role of the sternum, if any, in the aetiopathogenesis of adolescent idiopathic scoliosis (AIS) remains unexplored. We evaluated morphological features of the sternum for the first time in individuals with AIS.
Methods: Medical records of a tertiary hospital were reviewed from 2010 to 2018 to identify adolescents with thoracic or thoracolumbar AIS. We included scoliotic patients between 14 and 18 years of age on radiologic evaluation without previous treatment for the disease. A complete history and 3D computed tomography (CT) scan were also prerequisites for study inclusion. We compared the shape and position of the sternum between adolescents with AIS and age-matched individuals as control. The control group was recruited with a random selection from patients attending hospital for extraskeletal reasons during the same period. Using CT, we evaluated the part of the sternum found in the right front quadrant of the axial plane at the level of the middle of the manubrium of the sternum and apical vertebra.  We also provided an evidence-based theory of the sternum involvement in AIS aetiopathogenesis.
Results: Twelve scoliotic patients with mean age 16.6 and mean Cobb angle 39.7 degrees were included in the study. No difference was found between groups at the level of the manubrium of the sternum (p =0.486). At the level of the apical vertebra, there was a significant difference of the part of sternum found in the right front quadrant of the axial plane between groups (95 % vs 56 %, p <0.001).
Conclusions: These are preliminary data demonstrating for the first-time morphological differences of the sternum, between AIS and age-matched non-scoliotic individuals. The sternum of adolescents with AIS was more inclined than non-scoliotic controls that could raise the hypothesis of sternum involvement in AIS pathogenesis. HIPPOKRATIA 2018, 22(4): 173-177.

Adolescent Idiopathic Scoliosis (AIS) is the most common spinal deformity of puberty; though, the aetiopathogenesis of AIS remains unclear1,2. Several environmental, biomechanical, genetic, and neuromuscular reasons have been implicated; however, none has been proved to be the primary cause1,2. The disease presents a remarkable heterogeneity; the age of onset, sex prevalence, type of curvature, disease severity, and progression differs considerably among adolescents3,4.

AIS is typically defined as a vertebral rotational deformity with lateral spinal curvature and deformation of ribs3. The role of the sternum, if any, in the pathogenesis of scoliosis, remains unexplored. Any knowledge of sternal embryology, structure, and development is also limited. However, sternal deformities, as pectus excavatum, have been previously associated with scoliosis and the shorter sternum with vertebral column diseases, as Scheuermann’s disease5,6. We aimed to evaluate the morphological features of the sternum for the first time in adolescents with AIS. We compared the shape, and the position of the sternum in the transverse plane using computed tomography (CT) scans between untreated adolescents with AIS and non-scoliotic adolescents as a control.

The null hypothesis included that there are morphological differences of the sternum between AIS and non-scoliotic controls. This retrospective radiographic cross-sectional study took place in a tertiary hospital unit between 2016 and 2018 after obtaining Institutional Scientific Research Board approval. It was conducted according to the World Medical Association Declaration of Helsinki of 1964 as revised in 1975 and 2000. All patients were informed about their participation in the study and gave informed consent.

Patients suffering from thoracic or thoracolumbar AIS and aged between 14 and 18 years of age on radiologic evaluation were included in the study. A complete history, primary scoliotic curve greater than 20 degrees and three-dimensional (3D) thoracolumbar CT scan were also prerequisites for study inclusion. Exclusion criteria comprised any previous conservative or surgical treatment for the disease, such as brace treatment or vertebral fusion that was considered a change in the natural course of the disease. Lack of history or CT scan in their record, primary scoliotic curve less than 20 degrees and cervical, lumbar or secondary forms of scoliosis were also exclusion criteria. The control group was recruited with a random selection from patients attending hospital for extraskeletal reasons during the same period. By definition, they were non-scoliotic adolescents, aged between 14 and 18 years, free from any pathology of the vertebral column. These adolescents also had to provide a complete history and to have performed a 3D CT scan for other reasons. The random selection of electronic software (IBM SPSS, IBM Corp., Armonk, NY, USA) conducted the random selection of controls, stratified for age and sex.

In both levels, we divided the transverse plane into four equal quadrants; we then estimated the proportion of the sternum found to the frontal quadrants. We compared our findings with measurements in the middle of the manubrium and the middle of the body of the sternum from non-scoliotic individuals matched for age and sex.  Finally, we formed an evidence-based theory of sternal involvement in AIS aetiopathogenesis.

No previous studies and Minimal Clinical Important Difference concerning the position of the sternum in the transverse plane had previously been published. We were based on previous limited data concerning the normal racial and sexual morphological variability of the sternum10,11 to make a hypothesis of 10 % normal variation between individuals. Our statistical analysis (Lehr’s formula) showed that with sufficient power of 0.8 and the α value of 0.05, in order to see a difference between groups of 40 %, at least nine patients had to be enrolled in each group.

During this eight-year search period, a total of 132 adolescents with thoracic or thoracolumbar AIS were identified in the hospital medical records. Fifty-one patients were excluded upon confirmation of earlier reported treatment with Boston brace. The Cobb angle of the scoliotic curve was less than 20 degrees in twenty patients. Six patients were older than 18 years.  Forty-three patients were excluded due to lack of history or CT scan in their record.

Ultimately, twelve patients (ten females, two males) were included. The mean age of the patients was 16.6 years. None of them followed conservative treatment in the past. The mean Cobb angle was 39.7 degrees. Eight of them had CT scan as a preoperative screening for surgical treatment and four for non-skeletal reasons. The control group was matched for age and sex (ten females, two males, mean age 16.6 years). All of them had their scan for pulmonary reasons. 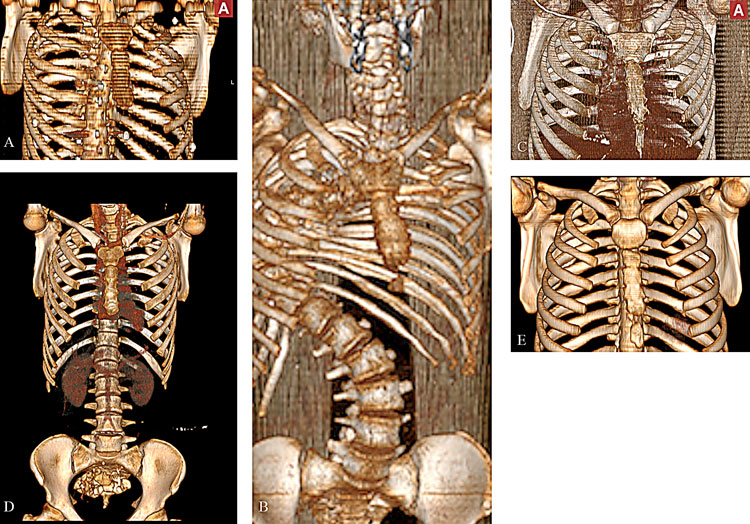 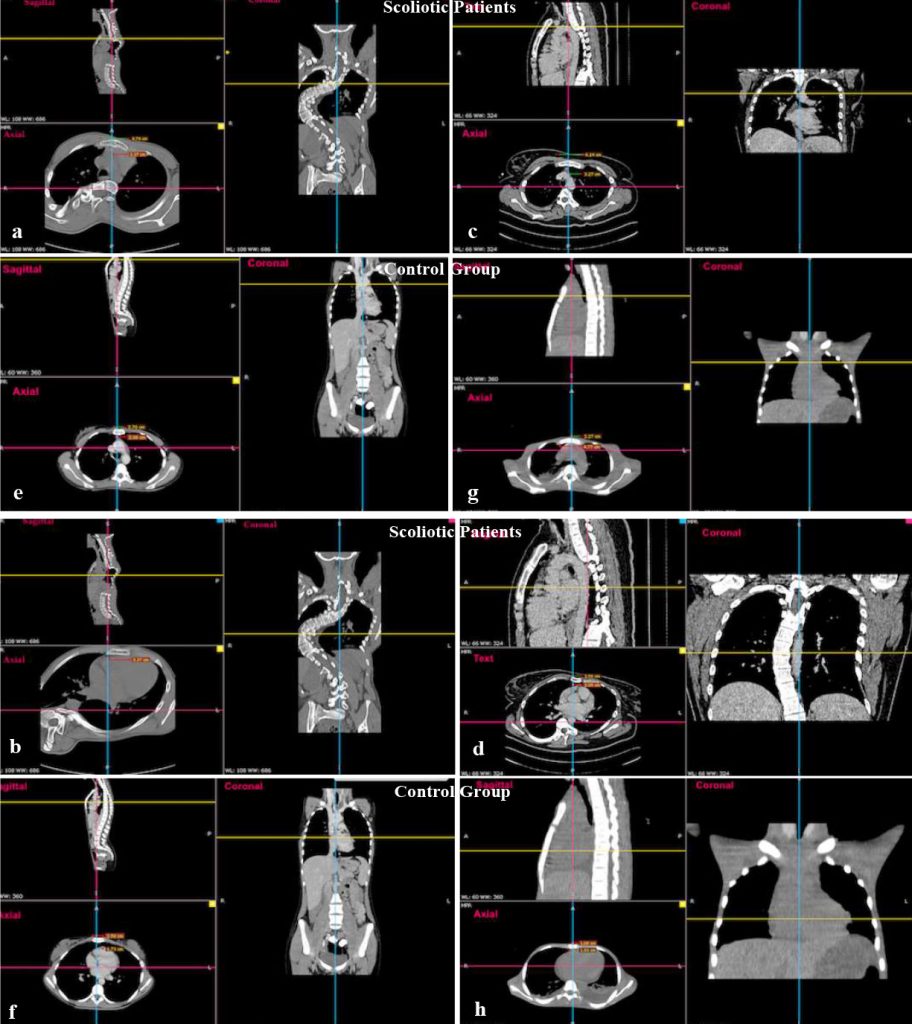 Figure 2: Examples of the position of sternum in the axial plane at the level of the middle of the manubrium for scoliotic (2a, 2c), and control groups (2e, 2g) and the level of apical vertebra for scoliotic (2b, 2d) and middle of the body for control group (2f, 2h). Please note that the corresponding coronal and sagittal planes are also provided.

Our study evaluated for the first-time morphological features of the sternum in AIS. Except for the vertebral column, the sternum may also have a scoliotic course. The body and xiphoid process of the sternum in scoliotic patients had more oblique course than the manubrium in the frontal plane. These findings are not clear evidence, but they are preliminary data that could raise the hypothesis of the involvement of the sternum in the aetiopathogenesis of scoliosis.

This study has certain limitations. Data presented in the study showed morphological differences of the sternum between scoliotic and healthy individuals; they are merely an observation of possible association. Besides, the deformity of the sternum could be secondary to scoliosis. However, we believe that the obliquity of the sternum in the frontal plane found in this study support a theoretical involvement of the sternum in AIS pathogenesis that is further explained by the following theory.

The human sternum consists of three parts, from above downwards: the manubrium, body, and xiphoid process. The body is the part of the sternum that is connected to the most commonly involved ribs and vertebrae in AIS. During childhood, the body consists of four segments, called sternebrae which later fuse to form one piece.

We assume that the symmetrical sternum development is responsible for the rotational stability of the thorax that balances the transmission of equal forces from the ribs to the vertebrae and controls the simultaneous balanced growth of the two hemithoraces. Asymmetry of the sternal development either an “unbalanced” growth of the bilateral ossification centers or uneven process of fusion between parts of sternebrae could transfer different forces in the vertical and sagittal level from the ribs to the vertebrae and provoke the onset of scoliosis. Several known embryonic, developmental, mechanical, and epidemiological parameters are in support of this theory.

The sternum has a different embryonic origin than ribs and vertebrae12 and probably a different role in the development of the thorax. Sternum develops from mesoderm while the ribs and vertebrae from somites12. The sternum also has a bilateral embryonic origin12. In the seventh week of gestation, bilateral mesodermal mesenchymal bands coalesce in the middle creating the sternum. These sternal bands may be responsible for controlling the relative hemithorax.

The sternum and ribs assist with the axial and rotational stability of the spine13,14. The load from the rib is transferred via the costotransverse articulation to the lamina and the vertebral body through the facet joint13. Healthy individuals usually have rib length symmetry15,16. Animal model studies revealed induction of scoliosis after rib resection or elongation17,18. Human studies also demonstrated rib length discrepancy between scoliotic patients and controls15,16,19. Scoliotic patients had a significantly longer length of ribs on the concave side at the level of the apical vertebra compared to non-scoliotic vertebral levels15. During adolescence20,21, asymmetrical development of the sternum could transfer an excessive load from the ribs to the vertebrae, causing secondary rib transformation and vertebral rotational deformity.

The sternal ossification centers are present at birth, but only the manubrium and the first mesosternebrae are utterly ossified. Multiple ossification centers symmetrically or asymmetrically positioned on both sides of the midline of the sternebrae, fuse later in a craniocaudal direction to form the body of the sternum10. The number and topography of ossification centers and fusion of mesosternebrae vary considerably among individuals12.  Non-scoliotic adolescents demonstrated variability of the shape of the sternum and at least three different combinations of the number of ossification centers per sternebra10-12, or malaligned bifid centers that were associated with rib articulation asymmetry or rib migration12.  At the age of 1-5 years, all sternebrae are separated. The fusion between 3rd-4th sternebrae ranges from 6-10 years to 15-17 years at the latest. The scoliotic patients may demonstrate further asymmetry in the number, location, and time of ossification of sternal centers; this could explain the variability of magnitude and the type of the scoliotic curve. We speculate that asymmetric ossification of sternal centers of the same sternebra, presence of additional centers or unsynchronised fusion of the two hemi-sternebrae could transfer unequal forces in the sagittal level from the ribs to the vertebrae and produce rib length transformation and vertebral rotational deformity.

Variations of sternal development could also explain the epidemiology of AIS.

Sternum and other thoracic deformities

Sternal deformities have been epidemiologically related with scoliosis or other vertebral deformities. Patients with pectus excavatum showed an increased incidence of scoliosis too5.  Fotiadis et al. supported that the shorter sternum, following accelerated fusion, increases the compressing forces to the anterior portion of the vertebral body leading to kyphosis and Scheuermann’s disease6.

Our study is the first demonstrating morphological differences of the sternum between AIS and healthy individuals. We do not have enough information to ascertain that discrepancies in the development of sternum are the primary cause of AIS. However, we must consider that the sternal development remains poorly understood, and knowledge of the ribs and vertebral growth is remarkably limited. We suggest that in future investigators should also focus on the sternal development in scoliotic patients. The dimensions, shape, and course of the sternum, the ossification centers, and pattern types, the number of sternebrae, age-specific sternebrae fusion, manubriosternal, and sternoxiphoidal fusion must be evaluated in adolescents suffering from AIS.