Introduction: The effectiveness of a low protein diet (LPD) to delay the progression of chronic kidney disease (CKD) remains controversial. The questions persist regarding which LPD for which CKD patients? Our study aimed to investigate the role of LPD in selected patients with CKD stage G3a.
Methods: Forty-seven selected patients (23 men, mean age 55 ± 12), in stage G3a of CKD (eGFR: 45-59 ml/min) were included in this prospective 12 months study with a recommended dietary protein intake (DPI) of 0.8 g/kg/day. The DPI was estimated from 24 h urinary urea nitrogen excretion (Maroni formula).  All patients were trained by dietitian-nutritionist and had one baseline control and three visits. The clinical data, blood pressure, diet-adherence, eGFR, albumin, cholesterol, hemoglobin, proteinuria, and BMI were analyzed.
Results: According to the adherence to LPD, the patients were divided into Adherent group (AG, n =24, 51 %) with DPI of 0.75 ± 0.25 g/kg/day and non-Adherent group (NAG, n =23, 49 %) with DPI of 1.3 ± 0.31 g/kg/day. During the follow up the eGFR decreased from 57.68 ± 4.0 to 56.11 ± 4.8, and from 55.45 ± 7.0 to 52.46 ± 7.2 for AG and NAG, respectively. The real drop of eGFR after 12 months was 1.57 for AG and 2.99 ml/min for NAG. The difference was statistically significant (p <0.01).
Conclusion: Despite the significant percentage of non-adherent patients, our pilot study confirms the beneficial effect of LPD on CKD progression. Adherent patients in G3a stage protect more successfully their GFR compared with non-adherent patients after 12 months. CKD stages with mild reduction of GFR are more challenging for further clinical studies. HIPPOKRATIA 2018, 22(4): 178-182.

Dietetic regimens and medical nutrition therapy are becoming increasingly important in the overall treatment of patients with various diseases. Their contribution to the treatment of the most severe medical conditions is currently confirmed in everyday clinical practice1. Due to the well-known benefits of various types of diet in many diseases, nutrition became a global health system policy, especially in developed countries. Chronic kidney disease (CKD) is an actual and severe health problem not only from the medical but pretty much from the social, financial, and economic point of view. According to the last reports of the professional nephrology societies, 10-13 % of the world population is in one of the five stages of CKD2. Based on the estimation of glomerular filtration rate (GFR), CKD is divided in 5 stages: stage G1 (GFR: 90-120 ml/min), stage G2 (GFR: 60-90 ml/min), stage G3a (GFR: 45-59), stage 3b (GFR: 30-45 ml/min), stage G4 (GFR: 15-29 ml/min), and stage G5 (GFR: <15 ml/min) when the renal replacement therapy starts (dialysis and/or transplantation). The natural course of CKD is usually gradual and relatively slow, taking even several years to progress from stage G1 to G5. Therefore the five stages of CKD leave enough time and space for therapeutic and dietetic intervention which could delay the progression to the final stage, to dialysis and/or transplantation. Despite numerous clinical trials and observational studies, the effectiveness of low protein diet (LPD) to decrease the progression of CKD remains controversial, although it is well established that protein restriction is beneficial for reducing uremic symptoms and proteinuria in uremic patients3,4. Even, the initial results of Diet in Renal Disease (MDRD) study in the middle of the nineties were inconclusive and additional analysis supported the hypothesis of the effect of LPD to CKD progression5. The possible mechanisms are not very well known. There are few animal and human studies which confirm that LPD constricts the glomerular afferent arterioles with a consecutive drop of the intraglomerular pressure and decrease of glomerular blood flow6,7. Together with the efferent arterioles dilatation caused by angiotensin II receptor blockers (ARB) or ACEI (angiotensin-converting enzyme inhibitors), LPD could be a part of  an efficient reduction of glomerular hyperfiltration, one of the major factors in additional kidney damage and decline of kidney function8. Two questions are still in a debate: which is the optimal safe level of protein intake to secure a beneficial effect on CKD progression keeping the patients out of energy-protein wasting and malnutrition, and in which stage LPD should start to reach a maximal effect! For the time being, there are is sufficient data about the effect of LPD on the early stages of CKD (G 1-2), where GFR is still sufficient enough to maintain the patient stable9. Despite the different opinions, stages 3a and 3b are probably the right time to start LPD. Our study aimed to investigate the short term effect of LPD in CKD patients started in stage G3a.

Forty-seven carefully selected patients (23 men, mean age 55 ± 12 years) in stage G3a of CKD (eGFR-MDRD 45-59 ml/min) were included in this observational prospective 12 months study. The inclusion criteria regarded the age (18-64 years) and GFR (stage G3a). All patients signed written consent before inclusion, and the study was approved (including ethical issues) by the Council of the Faculty of Technology and Nutrition (decision: 26.09.2014) and conducted between 2014 and 2016 at the University Clinic of Nephrology in Skopje and the Department of Internal Medicine, Medical Faculty of Shtip, in North Macedonia. Twenty-eight patients belong to the Macedonian Christian population, while 19 are Albanian Muslims. The patients underlying diseases were: hypertension with nephroangiosclerosis (18), pyelonephritis with urinary tract infection (9), glomerulonephritis (7), uric nephropathy (5), autosomal dominant polycystic kidney disease (ADPKD: 5), and diabetes (3). A multidisciplinary team of nephrologists, certified nutritionist-dietitian, specialized nurse, and psychologist was in charge of the medical, nutritional, and psychological monitoring of the patients for a period of 12 months. All patients were trained on a special low protein diet protocol, using usual nutritional guidelines and followed by CKD Diet Counseling Referral Form from the National Kidney Disease Education Program. The recommended daily dose of protein intake was 0.8   g/kg/day. The patient’s protein intake during a 12-month follow-up was estimated from 24 h urinary urea nitrogen excretion, according to the Maroni formula10 as follows:

The Kolmogorov-Smirnov normality test was utilized to characterize the data distribution. Results are presented as mean ± standard deviation or percentage. Comparisons between baseline and follow-up data were analyzed using the paired t-test. For comparisons between independent groups, Student’s t-test, Chi-square, or ANOVA test were used. A multivariate regression analysis was performed to verify variables independently associated with the annual changes in e-GFR. Statistical significance was accepted as p-value <0.05. The IBM SPSS Statistics for Windows, Version 22.0 (IBM Corp., Armonk, NY, USA) was used.

The total cohort of patients

Multivariate regression analysis was performed to evaluate the independent influence of each variable possibly associated with progression of CKD (urea, creatinine, UUN, PCR, DPI, proteinuria, and hypertension). None of these variables was independently associated with the change of eGFR by year.

Analyzing Table 2, it is obvious that a significant percentage of the patients did not respect the recommended daily protein intake indicated in the dietary charts. Instead of 0.8 g/kg/day, the average input was 1.18, which is an increase of almost 50 % of the recommended values. Despite the including of dietitians, specialized nurses and nephrologists, the satisfactory adherence to LPD was not achieved. The percentage of 51 % of adherent patients to LPD in our study is similar to the data in literature, e.g., Rizzeto et al reported that the adherence rate at 49 % while in the MDRD study, it was 25-50 %11,12. The reasons for a non-adherence among our patients were socioeconomic (poverty, lack of sufficient knowledge of quality and quantity of the food), and patient-related (lack of critical self-perception as a patient). Regarding patients ethnicity, most of our predominantly rural Muslim patients belong to the AG, which could be understood as an impact of the low socioeconomic level and traditional way of living. The difference in ethnic distribution between the groups was confirmed statistically (Table 1, p =0.04). Nevertheless, patient adherence is a crucial point in every dietetic study, and careful patient selection should be performed before initiating any well-designed study in this field10.

LPD is commonly advised to nondialyzed (CKD) patients under conservative treatment. According to the Kidney Disease Improving Global Outcome (KDIGO) recommendations, the amount of protein prescribed varies from 0.6 to 0.8 g/kg/day13. Most of the performed studies in the last decades confirm the beneficial effect of LPD on uremic symptoms rather than on the progression of CKD. Therefore, LPD is associated with improvement of the secondary hyperparathyroidism, peripheral insulin resistance, hypertension, and acid-base disorders14. Interestingly, only a small number of studies confirm the positive impact of LPD on CKD progression. Even in the most reliable MDRD study, valuable conclusive results were not revealed regarding the possible effect of 0.8 g/kg/24h LPD on GFR, but this was really done by some additional analysis several years later5,15.

Another critical issue is the method of GFR estimation. There are different formulas used in everyday clinical practice. Despite the possible errors, we used the GFR-MDRD method, which is probably more accurate, simple, and very appropriate for repeated measurements in the same patient16. Analyzing the results of GFR in both groups presented in Table 2, it can be confirmed that the drop of GFR was more prominent in NAG (2.99 ml/min) which is double compared with the GFR drop in AG (1.57 ml/min). The difference reached a statistical significance (p =0.008).  The double GFR drop in NAG might be explained with the increased DPI in NAG (1.3 compared with 0.75 g/kg/day, in AG). All other possible factors affecting CKD progression did not reach significant differences between the groups (Table 1, Figure 1). 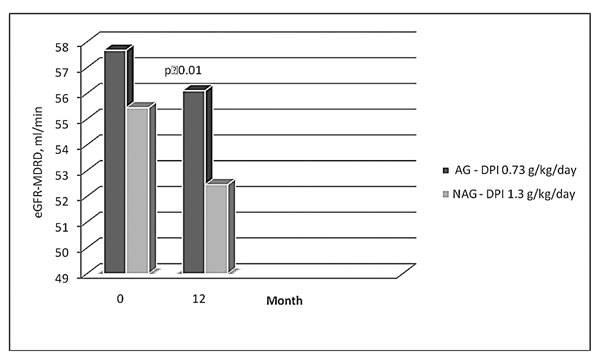 This statistical difference between the drop of GFR-MDRD in AG vs NAG after 12 months of follow-up confirms the impact of LPD on the progression of CKD, which is also noted in other recent studies17,18. According to KDIGO recommendations, LPD should start in the G4 stage of CKD13. Our study suggests that a possible beneficial effect could be achieved when LPD starts in stage G3a or, even, earlier when the kidney function is more stable, and the patients are not yet clinically complicated19. On that way, GFR could be successfully preserved an extended period approaching the usual nominal involute decline of one ml/min/year2. Together with the Mediterranean diet, LPD is a part of the Medical Nutrition Therapy, which is now subject to extensive research and application20. The mild reduction of GFR in G3a stage of CKD and the prescribed diet of 0.8 g/kg/day did not expose the patients in an increased risk of energy-protein wasting or malnutrition. It is an additional reason to start LPD in earlier CKD stages.

Despite the significant percentage of non-adherent patients, our pilot study confirms once again the beneficial impact of LPD on CKD progression. This effect can be more evident in the stages with mild rather than in moderate and severe GFR reduction, i.e., in stage G3a rather than G3b and G4 of CKD. We emphasize the beneficial short term effect of LPD in stage G3a when the clinical complications are still not evident, and the apparent effect of the therapy is more pronounced. Monitoring of the DPI by assessing urinary protein is an easy-to-use method in everyday clinical practice. Involvement of a multidisciplinary team, including nutritionist-dietitian and nephrologists for monitoring and treating the CKD patients, is recommended.