Background: Thromboangiitis obliterans (TAO) is a non-arteriosclerotic segmental inflammatory occlusive vasculitis typically in the upper and lower extremities affecting small- and medium-sized arteries and veins. We present the treatment protocol for TAO involving the use of peripheral sympathetic block through an axillary catheter.
Case report: An unconscious 56-year-old female patient was transferred to the emergency service, intubated, and mechanically ventilated. The patient was provisionally diagnosed with hypertensive intracranial hematoma and admitted to the intensive care unit. Invasive arterial pressure monitoring was performed through the left radial artery cannula. Four days later, upon the observation of symptoms of a circulatory disorder in the fingers distal of the left and right hands, the cannula was removed from the left radial artery, and another was placed in the left dorsalis pedis artery. At the same time, an 18 Gauge catheter was placed in the axillary perineural sheath bilaterally, and a total of 10 ml lidocaine 0.5 % (5 ml for each side) was injected six times a day. During each injection, the temperature was measured using a surface probe on the distal of the fingers with poor perfusion and another area of the same hand with good perfusion. Lidocaine treatment protocol through the axillary perineural catheter was applied for 15 days for the right hand and 18 days for the left hand. As the treatment proceeded, a significant increase was observed in the results of the temperature measurements on the fingers with poor perfusion.
Conclusion: We believe that a peripheral sympathetic block as we report herein could be considered as an alternative in the treatment of TAO. HIPPOKRATIA 2018, 22(3): 141-144.

Thromboangiitis obliterans (TAO), which is also known as Buerger’s disease, is a non-arteriosclerotic segmental inflammatory occlusive vasculitis typically in the upper and lower extremity holding small arteries and veins. Its causes are unknown; however, smoking is known to have a significant influence on its etiology. The lower extremity is frequently affected, whereas the upper extremity is affected in 30 % of the cases. It has been observed that quitting smoking and sympathectomy are useful in TAO treatment1-3.

In many patients with extremity ischemia, the accepted routine treatment includes vasodilator prostaglandins, anticoagulants, and antiplatelets. Sympathectomy or a nonsurgical sympathetic nerve block can be used for patients with severe symptoms in order to prevent potential sympathetic vasoconstriction2-4.

In the current report, we aim to present the treatment protocol for TAO involving the use of peripheral sympathetic block through an axillary catheter.

A female patient aged 56 years was transferred to the emergency service as a result of syncope. Due to respiratory stress and unconsciousness, she was intubated and mechanically ventilated. A hematoma was observed in the pons and mesencephalon region in the computed tomography (CT) of the head. A subacute infarct was also observed in the temporal and occipital regions in control cranial CT. She was diagnosed with hypertensive intracranial hematoma and was admitted to the intensive care unit with a Glasgow Coma Scale of 8 for further tests, follow-up, and treatment. When the patient’s blood pressure was measured at 180/100 mmHg, an infusion of nitroglycerin and esmolol was commenced. Arterial pressure monitoring was performed through the left radial artery cannula placed in the emergency service, and mechanical ventilation was maintained. Antihypertensive and antibiotic treatment was administered. A supstantial regression was observed in the density of hematoma in the sequential cranial CT taken on the second day.

Four days later, upon the observation of symptoms of a circulatory disorder in the first, second, third, and fifth fingers distal of the left hand and the second and third fingers distal of the right hand, the cannula was removed from the left radial artery, and another was placed in the left dorsalis pedis artery. Taking into consideration her clinical symptoms such as cyanosis and decrease in the temperature of the upper extremities bilaterally, as well as her smoking history (one pack per day), she was diagnosed with TAO, and her treatment was organized accordingly. On the same day, an 18 G catheter was placed in the axillary perineural sheath bilaterally using the loss of resistance technique, and a total of 10 ml lidocaine 0.5 % (5ml on each side), was administered six times a day. Prior to each injection, the temperature was measured using a surface probe on the distal of the fingers with poor perfusion and another area of the same hand with good perfusion. Mean values were calculated and recorded.

The cyanosis in the right hand in the second and third fingers distal regressed significantly nine days after the treatment initiation, and on the 14th day, the signs attributed to poor perfusion disappeared completely (Figure 1 A-C).

Figure 2: A) Before treatment, signs of a circulatory disorder in the first, second, third, and fifth fingers distal of the left hand; B) Significant regress of the poor perfusion in the left hand, nine days after the treatment initiation; C) Appearance of the left hand after treatment.

Lidocaine treatment protocol through the axillary perineural catheter was applied for 14 days in the right hand and 18 days in the left hand. 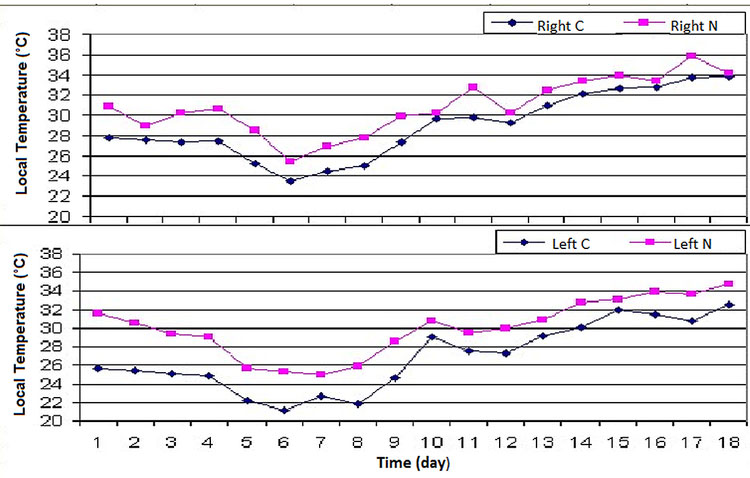 The main principle in the treatment of TAO is to improve perfusion of the tissues by restoring circulation and blood rheology in the affected region. When TAO cases are examined, it is observed that among existing signs, the occurrence of ischemic trophic lesions is more prevalent than pain2,3,5. Therefore, the primary treatment modality to ensure optimization of tissue perfusion involves the reduction of the influence of the sympathetic system utilizing medical or surgical methods6. Thromboembolic therapy, surgical revascularization, and sympathectomy are among the recommended treatment options; however, the superiority of one treatment effects over the others has not been clearly demonstrated in the literature. No treatment can provide a 100 % recovery in the course of the disease. Quitting smoking is essential for the treatment success2,7-10. Nevertheless, although very rarely, the disease can be encountered in patients who do not use tobacco products11.

Patients with TAO typically exhibit ischemic symptoms due to stenosis or occlusion of the distal small arteries and veins. Whether both the upper and lower extremities are involved and the size and location of the affected vessels help to differentiate TAO from atherosclerosis. Even though symptoms may begin in the peripheral portion of a single limb, TAO often progresses proximally and involves multiple extremities. TAO is distinguished from the other vasculitides and atherosclerosis by superficial thrombophlebitis. Superficial thrombophlebitis may occur before the onset of ischemic symptoms because of the arterial occlusive disease, and it frequently parallels the disease activity1-3,12.

Paraskevas et al13 performed intravenous regional sympathetic block on a patient in whom ischemic lesions had developed in the middle, ring, and little fingers in distal and interphalangeal joints by the administration of guanethidine 20 mg and lidocaine100 mg. Following the first five treatments, it was observed that the Visual Analogue Scale (VAS) value was two, and after ten additional therapies, the pain disappeared. While recovery of the pinkness in the middle and ring fingers was observed, a capillary refill in the little finger was noted. After eight months (totally 23 therapies), the pain was reported to have disappeared completely and also, circulation particularly in the middle, ring, and little fingers was noted to have improved satisfactorily.

In a series including 27 cases of critical finger ischemia, four of which were TAO, Stumpflen et al14 reported that in 92.6 % of the patients on whom they performed a single transvenous regional block using guanethidine, the pain disappeared completely, and in 83.3 %, there was an improvement in the ulcerous lesions.

We did not encounter in the existing literature any study where a peripheral sympathetic block was performed, as in our case. In the presented case, in general, equal results were obtained at the end of the treatment for both hands. However, at the beginning of treatment, the decrease in temperature in the normal and cyanotic regions as a result of the vasodilatation caused by the peripheral sympathetic block in the first week draws attention. The decrease in the temperature does not require the discontinuation of treatment. It constitutes a result of the insufficient development of capillary collaterals and thus the formation of venous stasis following vasodilatation. After one week, the temperatures measured in the cyanotic and normal regions of both hands increased and became stable. During this lidocaine treatment protocol we administered through the axillary perineural catheter, as reported before, we did not observe any known neurologic and cardiovascular toxicity signs15. Since our patient was unconscious at first, it was not possible to record and evaluate the VAS score, and therefore, the effect of the performed treatment on pain relief could not be evaluated.

Clinical recovery in our patient submitted to peripheral sympathetic block was observed on the 14th and the 18th days. We believe that when performing such a treatment, the temperature decrease that occurs in the initial 7-10 days should be taken into consideration, and the treatment duration should be adjusted accordingly. We believe that treatment should be continued until the ischemic region recovers, and according to the data we obtained, this period should be at least three weeks. A peripheral sympathetic block could be considered as an alternative treatment of TAO. Nevertheless, a prospective randomized study should be conducted in order to be able to decide on the efficiency of this treatment.

The authors declare that they have no conflicts of interest.

This work has been presented as a poster at the 4th Regional Anaesthesia and Pain Therapy congress, Cape Town, South Africa.