Background: Before applying new blood management strategies, the extent of blood product transfusions and its correlation with perioperative mortality should be identified.

Methods: This study retrospectively analyzed the extent of perioperative transfusions of red blood cells (RBC), fresh frozen plasma (FFP), and platelets (PLT) in 565 consecutive cardiac surgery patients, who received transfusions based on standard prescriptions. Patients were stratified in four groups according to perioperative transfusion units (no transfusion, <5, 5-10, >10 units). Mortality was analyzed in relation to the type and extent of each blood product transfused and their combinations. Subsequently, the ability of transfusion volume to predict mortality was tested.

Cardiac surgery patients use approximately 20 % of the hospital blood bank reserves in blood products worldwide1. Given the low availability of blood products and the increased morbidity and mortality associated with their administration, there is a need to reduce blood product consumption. Cardiac surgery and anesthesia services tend to endorse new protocols to guide blood products perioperatively, aiming to achieve effective bleeding control and minimize blood product use2,3. Additionally, the implementation of these late clinical practices has an economic impact that should be carefully balanced between the cost of acquiring monitoring technology and the savings that reduced blood product use can provide4,5.

In the present study, we retrospectively examined blood product transfusions and in-hospital mortality of consecutive cardiac surgery patients, without differentiating between elective and emergency cases.

The standard prescription in our hospital required the administration of two units of fresh frozen plasma (FFP) after a coronary artery bypass grafting (CABG) operation and four units of FFP plus five units of platelets (PLT) for a valve or mixed cardiac operation, without any laboratory confirmation of coagulation disorder. Red blood cells (RBC) transfusions were applied when point of care measurements of hemoglobin concentrations were below 10 g/dL. Additional blood products could be transfused according to the clinical judgment of the attending physicians and laboratory confirmation that justified their administration. During the studied period, the blood bank could not provide cryoprecipitate preparations and the pharmacy could not dispense fibrinogen, vitamin K-dependent factor, or rFVIIa concentrates.

After obtaining Ethics Committee approval (18.10/10/2014, Item 13), we searched the hospital’s revised Blood bank information system (only patients from its last upgrade that could provide all the necessary data were included, so the enrollment period included patients from 01/02/2010 up to 31/05/2014) and retrospectively assigned our patients to four perioperative transfusion classes (PTCs) based on the perioperative blood product administration. Handwritten diagrams of anesthesia and extracorporeal perfusion were also examined to retrieve demographic and somatometric data, patient’s comorbidities and duration of extracorporeal circulation and cross-clamp times. A search in the Hematology laboratory information system provided data on full blood counts at the preoperative and the immediate postoperative phase, when the patients were admitted in the cardiac intensive care unit (CICU). Patients for whom we could not retrieve all the above data were excluded from the study.

Retrieved comorbidity data were hypertension (on chronic anti-hypertensive treatment), chronic obstructive pulmonary disease (COPD; as per EuroSCORE II6), pulmonary hypertension (moderate or severe, as per EuroSCORE II), prior cerebrovascular accident (with either permanent or resolved disability or transient ischemic attack), heart failure [HF; either chronic heart failure (CHF) on treatment or preoperative acute pulmonary edema, or use of inotropes], peripheral arteriopathy (as per EuroSCORE II), kidney dysfunction (creatinine clearance <85 ml/kg/min or on dialysis), diabetes mellitus (either on anti-diabetic medication or insulin treatment for at least one month), hyperlipidemia (blood cholesterol >200 mg/dL and/or triglycerides >150 mg/dL or on statin treatment). The term “other comorbidities” included: hyperlipidemia, thyroid disease, cancer, and any other comorbidity.

Statistical analysis was performed using the chi-square test to compare mortality rates. The normal distribution of data was tested (f test) and a Student’s t-test with unequal variances was used in normally distributed variables’ data, whereas a Mann-Whitney U-test was utilized if variances would be shown to differ significantly. Due to the lack of a power analysis sample size calculation, we applied a post hoc power analysis to evaluate the statistical strength of the results. Subsequently, receiver operator characteristics curve analysis (ROC) was used to identify cutoff points for blood product units that could reasonably predict mortality. Statistical significance was set to p <0.05. Statistical analyses were performed in IBM SPSS Statistics for Windows (IBM Corp., Armonk, NY, USA) version 23 and Microsoft Excel Data Analysis Tool (Microsoft Corp., Seattle, WA, USA) while post hoc analysis was performed with ClinCalc LLC, online statistic calculators (http://clincalc.com/Stats/Power.aspx).

There were 565 cardiac surgery patients with complete data (141 patients were excluded due to incomplete data retrieval), who underwent cardiac surgery (Figure 1). Demographic data and co-morbidities are presented in Table 1. Studied patients underwent CABG either using extracorporeal circulation (on-pump) or with a beating heart (off-pump), heart valve replacement or repair, or mixed operations (also including ascending aortic aneurysm excision and grafting, Table 1).In all samples, hemoglobin, hematocrit, and platelet count values presented a normal distribution. The total number of units of RBC, FFP or PLT transfused were also normally distributed. 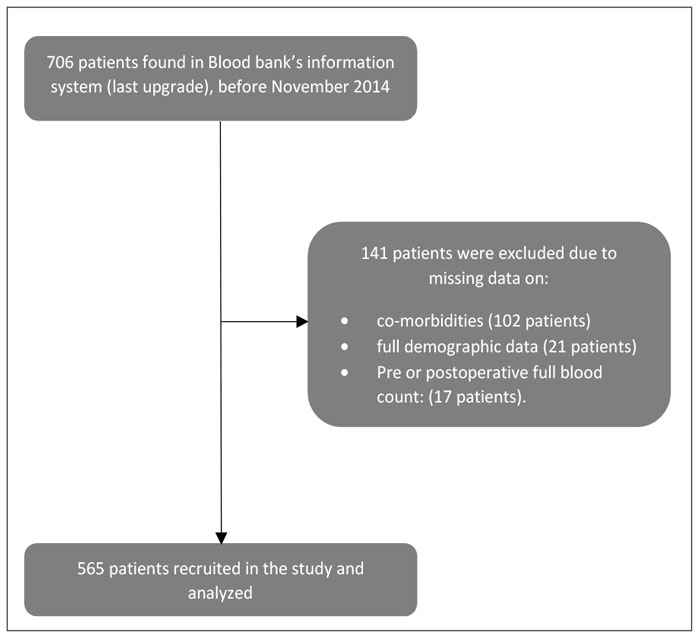 Figure 1: Recruitment of the 565 consecutive cardiac surgery patients with complete data who were enrolled in the study.

Mortality rate according to PTC class

Mortality rates were significantly different among PTC classes: PTC-1: 6.2 %, PTC-2: 5.3 %, and PTC-3: 15.2 % (p =0.002). Patients in PTC-0 had a mortality rate of 33 % because one of the three patients in this class died intraoperatively from a ruptured ascending aorta aneurysm before receiving any blood product transfusion. Thus, the PTC-0 class was excluded from further data analysis. 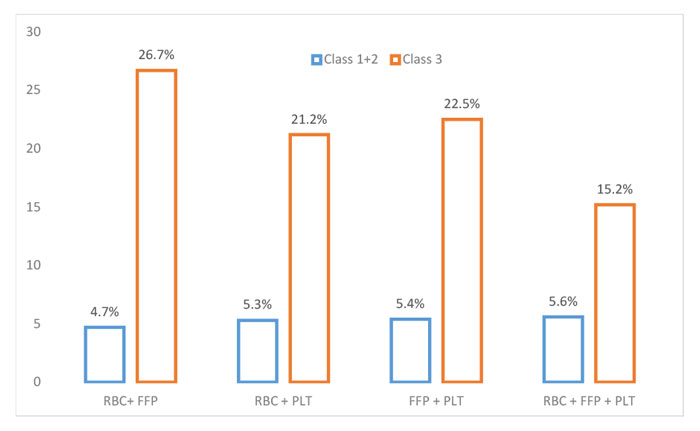 Further analysis revealed that any combination of two different blood products (RBC, FFP or PLT) was associated with an increase in patient’s mortality when exceeding a certain number of units. Patients transfused with >10 units of RBC + FFP irrespective of PLT, had an increased mortality rate compared with those transfused with ≤10 units (26.7 % vs 4.7 %, p <0.0001; post hoc power, 100 %; Figure 2). 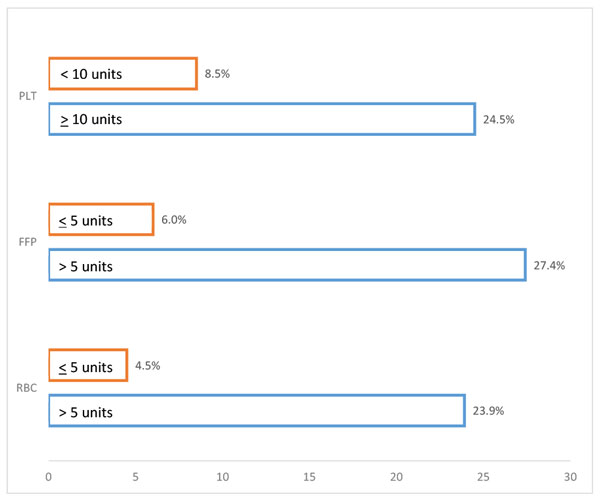 Figure 3: In hospital mortality rates according to the number of blood products transfused. 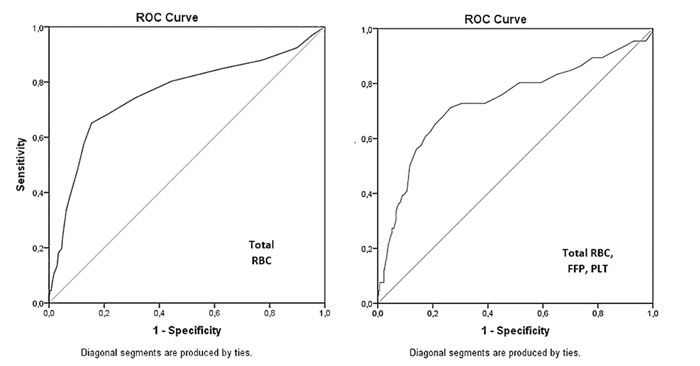 Mortality rate according to the operation type

Transfusion strategies differ considerably between countries and even between cardiac centers in the same country8,9. The most recent guidelines and clinical directives advocate restrictive transfusion policies that are supported by widely accepted techniques of blood conservation10-13. Generally, countries that implement patient blood management protocols tend to present significantly lower transfusion rates compared with those that do not use such protocols8.

Frequency and volume of transfusion.

In the present study, most of the studied patients (99.5 % of the patients) were transfused with blood products perioperatively, which is only consistent with earlier studies in cardiac patients14,15 and in contrast to percentages around 50 % which seems to be the commonest figure of transfusion rates in current cardiac surgery practices16. A large percentage of our patients (86.2 %) received more than two units of FFP intraoperatively, and 62 % received either two or four units of FFP intraoperatively (only 61 patients received no FFP). Three hundred and seventy-five patients (n =375, 66.4 %) received more than one unit of platelets, and 45 % received five units of PLTs intraoperatively (186 patients received no PLT intraoperatively). These data indicate high conformity with the standard order of blood products transfusion.

Given that preoperative anemia is an independent predictor of postoperative morbidity and mortality in cardiac surgery21 and perioperative anemia might also be harmful, it seems that the ideal balance between anemia and inappropriate transfusion risk has not been definitely determined22. Based on current studies that compare restrictive to liberal strategies, judicious use of transfusion triggers for restrictive policies to the era of 7.5-8 g/dL is at least non-inferior to liberal practices and can probably safeguard against increased morbidity and mortality rates16,23,24.

In our analysis, all possible combinations of two blood products showed an increased mortality rate when administered in quantity of more than ten units. This result denotes a significant mortality effect of all blood products in our patients and challenges the safety of the “transfusing by standard orders” attitude.

All recent transfusion guidelines, based on the best evidence in the literature, advocate the use of appropriate monitoring of oxygen delivery and availability, hemostatic mechanism effectiveness, and modifications of preoperative contributors to perioperative transfusions to decrease avoidable transfusion hazards and potentially abolish transfusion-related mortality10-13. We are currently working on the implementation process of comprehensive, protocol-driven transfusion orders, justified by laboratory or bedside monitoring that will probably reduce the contribution of transfusions to our center’s mortality rate.

There are some limitations related to the design of the current study. Its retrospective nature may have incorporated undisclosed bias and hidden confounding factors that cannot be eliminated a posteriori. Due to lack of data, we could not determine the post-discharge mortality of the patients studied, to examine the temporal aspect of the presumed over-transfusion approach on long-term mortality. Similarly, we could not retrieve data on perioperative blood losses, end-organ oxygen availability and coagulation parameters that would help us to comment on the necessity to administer blood product transfusions. Even though we retrieved data on most of the Euroscore II contributing factors, we could not recover the EuroScore II classification of our patients in order to present each patient’s predicted mortality risk.

In conclusion, our study recorded and revealed the “old school” techniques of perioperative transfusions that were dominant at our center during the study period. Transfusions of blood products driven by standard prescriptions are currently not satisfactory and may be associated with increased mortality risk. Isolated RBC and FFP administered in an amount of more than five units, and PLT (single units) or combined administration of RBC, FFP, or PLT in amounts of more than ten units are associated with increased mortality in cardiac surgery patients. Interventions that could alleviate this mortality effect should be addressed, and their impact should be appropriately re-evaluated.

There is no conflicting of interest for any of the authors concerning the presented data.