An ureteral avulsion is probably the most disastrous complication of ureterorenoscopy, and it was reported to occur in less than 1 % of patients undergoing ureterorenoscopy1.

A 56-year-old female patient presented to the clinic with nausea and colic pain on the left flank. Computerized tomography scan demonstrated a 10 x 7 mm stone in the proximal ureter approximately 4-5 cm from the ureteropelvic junction (UPJ) with concomitant dilatation of pelvicalyceal system. The stone was adherent to the ureteral mucosa, and following its fragmentation by pneumatic lithotriptor utilizing a 9.5 Fr semi-rigid ureterorenoscope, an ureteral avulsion was noted to had occurred in approximately 2-3 cm distance from the UPJ. Subsequently, in an open procedure, a left nephropexy was carried out which allowed to free up to 3-4 cm of ureteral length in order to reach the proximal ureteral stamp for anastomosis. After filling the bladder, a modified bladder flap approximately 12-14 cm was created based posterolaterally on the left side, transpositioned antero-infero-laterally toward the contralateral base. To provide tension-free anastomosis, the left posterolateral wall of the bladder was fixed with a psoas hitch method. Single 6 Fr double-J-catheter was placed inside the neoureter, and the Boari flap was anastomosed end-to-end to the remaining ureter. Before closing the bladder, the avulsed ureteral tissue was excised from the left ureteral orifice, and this field was sutured. Finally, the residual bladder tissue was sutured with continue technique. 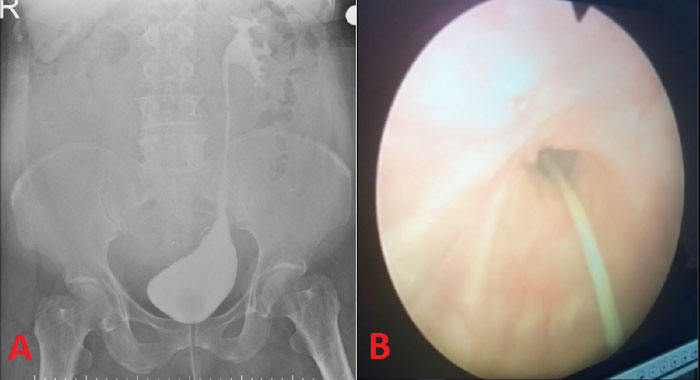 Figure 1: A) Cystogram showing no evident leakage from the urinary system on the 21st postoperative day, B) Cystoscopic image showing the neoureteral orifice and the double-J-catheter before its removal on the third postoperative month.

Herein we present the combination of the extended Boari bladder flap and the psoas hitch with nephropexy as feasible management for ureteric damage of substantial length.

The authors report no conflicts of interest.