Methods: In this study, we retrospectively reviewed the epidemiology, clinical characteristics, microbiology, and treatment of patients admitted with SSTI during a five-year period in the Internal Medicine Department of a tertiary hospital.

Results: During the study period, 317 patients were recorded, with a mean age of 72.1 years. The most common underlying medical conditions were diabetes mellitus, chronic kidney disease, and heart failure. Cultures were positive in 23.3 % of cases, 62.2 % of which were polymicrobial. The most frequently isolated microorganisms were Enterococci, Escherichia coli, and Pseudomonas aeruginosa. Significant antimicrobial resistance rates were noted, in particular for gram-negative microorganisms. Mortality was higher than described in the literature and associated with age, comorbidities, and infection by gram-negative microorganisms.

Conclusion: This study denotes the role of gram-negative bacteria in SSTI epidemiology. Therapeutic protocols regarding the empiric treatment of SSTIs should necessarily take into account the local epidemiology of isolated pathogens and antimicrobial resistance. HIPPOKRATIA 2018, 22(1): 23-28.

Skin and soft tissue infections (SSTI) are an increasingly identified cause of Emergency department visits and hospitalizations with a significant impact on healthcare costs1-7. They consist of a heterogeneous group of infections that range from superficial uncomplicated infections to complicated SSTIs8. Complicated SSTIs (cSSTIs) are infections that extend deep into the subcutaneous tissues, the fascia or the muscles, require surgical intervention, or involve patients with significant comorbidities such as diabetes mellitus, vascular deficiency or immune insufficiency9, which undermine response to treatment.

The most commonly reported microorganisms causing SSTIs are Staphylococcus aureus and β-hemolytic streptococci; however other streptococci, enterococci, and gram-negative bacteria can also cause SSTIs2,3,8,10-13. Importantly, cSSTIs have different microbiology with a higher prevalence of polymicrobial infections and gram-negative microorganisms, such as in patients with diabetes, in neutropenic patients, and patients with malignancy14-18. Furthermore, successful treatment of these infections depends on the local patterns of microbiology and antimicrobial resistance5,10,14.

The increasing frequency of SSTIs and the varying treatment options underline the necessity to study their clinical characteristics and microbiology further. This study aimed to report the clinical, epidemiological, and microbiological characteristics of patients admitted with SSTI in a tertiary-care referral centre in Greece, which is a country with a very high incidence of antibiotic resistance19.

This is a retrospective cohort study that enrolled adult-only patients admitted in the Internal Medicine Department of the University Hospital of Crete from January 2011 to December 2015 with a diagnosis of SSTI. The discharge notes and the Internal Medicine Department electronic database were screened to identify eligible patients that were hospitalized with SSTI. Then, the hard copies of the patients’ files and the electronic database were reviewed for data extraction regarding demographics (age, gender), medical history including comorbidities, previous episodes of SSTI, and antibiotic use or hospitalizations in the preceding three months before the recorded admission. We also collect data regarding the clinical presentation of SSTI and complications suffered, microbiological data and antimicrobial susceptibility, treatment administered for the SSTI, and outcomes including length of hospitalization, infection outcome, and readmissions due to SSTI within the subsequent three months. If a patient had more than one admission, the first admission was only included for analysis. Ethical committee approval was waived as the study was retrospective, started many months after the last patients had been discharged, personal data were protected, and patients had received standards of care according to institutional protocols at the time of treatment.

Infection was evaluated by use of the Systemic Inflammatory Response Syndrome (SIRS) criteria, whereby sepsis was defined as the presence of two out of four SIRS criteria20. Comorbid conditions were recorded in accordance with the Charlson weighted comorbidity index21. Blood cultures and tissue cultures in the case of surgical debridement were obtained from the SSTIs and the vast majority was collected within 48 hours after admission. Species identification and antibiotic susceptibility testing were performed using a VITEK®2 system (bioMérieux SA, Marcy- l’Étoile, France) in accordance to the Clinical and Laboratory Standards Institute (CLSI) standards22 for all antibiotics except for tigecycline. As far as tigecycline is concerned, susceptibility was determined by Etest (AB BIODISK, Solna, Sweden).

Categorical data were analyzed with Fisher’s exact test or the Pearson’s chi-square test, as appropriate. Continuous variables were compared using Student’s t-test for normally distributed variables and the Mann-Whitney U-test for non-normally distributed variables, after performing a D’Agostino-Pearson omnibus normality test. All tests were two-tailed and p-values <0.05 were considered to be significant. Data are presented as number (%) for categorical variables and median [interquartile range (IQR)] for continuous variables. All statistics were calculated with GraphPad Prism 5.0 (GraphPad Software, Inc., San Diego, CA).

During the five-year study period, 317 patients hospitalized for an SSTI were recorded. Figure 1 shows the flowchart of patient inclusion. The patient characteristics are shown in Table 1. The mean age of the patients was 72.1 years, and 137 (43.2 %) were male. The most common underlying medical conditions were diabetes mellitus (41 %), chronic kidney disease (defined as an estimated creatinine clearance of < 60 ml/min)23 (32.2 %), heart failure (30 %), ischemic heart disease (23.7 %), dementia (20.8 %), chronic respiratory disease (19.9 %), cerebrovascular disease (13.2 %), and peripheral artery disease (10.4 %). The median Charlson score was six (IQR: four to eight). A local skin lesion (most commonly due to diabetic foot) or recent trauma (in the preceding four weeks before SSTI) were present in 24.3 % and 13.6 % of the patients, respectively. Immunosuppressive treatment had been administered to 7.3 % of patients, most commonly long-term glucocorticoid and methotrexate (39.1 % and 30.4 % of patients that received immunosuppression, respectively). Recent antibiotic use was noted in 30.3 % of the patients, most commonly used were beta-lactams (71.6 %), fluoroquinolones (27.1 %), and clindamycin (25.1 %). Previous SSTI (within the preceding three months) was documented in 17.7 % of the patients, 82.1 % of which was located in the same anatomical site. 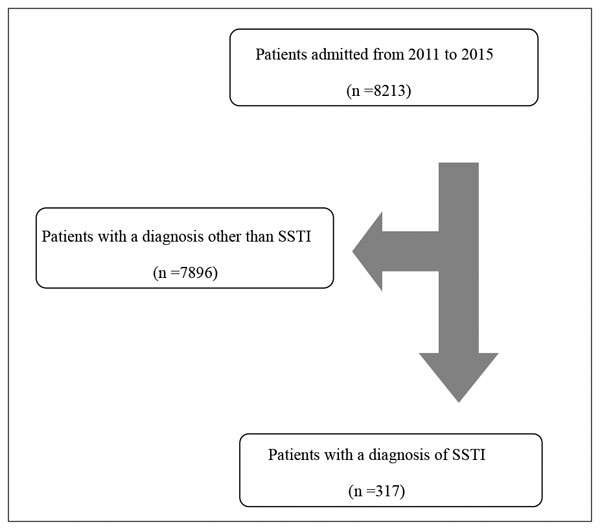 Figure 1: Flowchart of the patient inclusion in the retrospective cohort study conducted in the Internal Medicine Department during a five-year period.

Pus and tissue cultures were positive in 23.3 % of cases (74 cases), and 62.2 % of positive cultures were polymicrobial, yielding a total of 172 microorganisms, while no blood culture came back positive. Isolated microorganisms were gram-negatives in 54.6 %, gram-positives in 37.8 %, and fungi in 7.6 %. The most frequently isolated microorganisms were Enterococci (in 35.1 % of cases), E.coli (in 28.4 % of cases), Pseudomonas aeruginosa (in 24.3 % of cases), and S.aureus (in 21.6 % of cases). Among Enterococci and Staphylococci, 38.5 % and 43.8 % were resistant to penicillin and methicillin, respectively. The extended spectrum beta-lactamase (ESBL) phenotype was detected in 51.4 % of Enterobacteriaceae (Table 2).

The median total length of stay was seven days (IQR: 5-12 days). The overall hospital mortality rate was 6 % (19 out of 317 patients). Τhe readmission rate within three months following discharge was 17.1 % (51 out of 298 patients). Among the readmitted patients, 18 were admitted with a diagnosis of SSTI, and three patients died.

In terms of mortality, factors including age, Charlson index and underlying skin condition predisposing of SSTI, were found to be significantly correlated with death in univariate analysis (Table 3).

The present study re-evaluates important data on the clinical characteristics, epidemiology, microbiology, and outcomes of patients hospitalized with SSTI during a five-year period.

In our study, patients with SSTI were older compared to other studies24-27. This is consistent with the fact that increased age is a risk factor for SSTI26 and could reflect the higher general population median age in Greece, compared to the countries where the abovementioned studies were conducted (namely USA, South Korea, and China)28.

Interestingly, the most common pathogens identified in our study were Enterococci andgram-negative microorganisms, while S.aureus was the fourth most frequent pathogen. These data significantly differ from the literature, where S.aureus is the main causative agent of SSTIs14,17,24,29-31. This difference could be attributed to the older age of our cohort, the higher comorbidity rate and the notable rates of recent previous hospitalization and antibiotic exposure, which are all associated with a higher risk of infection by gram-negative microorganisms32-34. In accordance with the current study, in a previous study performed in our institution that involved oncologic patients from 2002 to 2006, Enterococci, Escherichia, and Pseudomonas were the commonest pathogens16. As a result, despite the different patient populations in these studies, it is reasonable to support that local epidemiology holds an important role in SSTI microbiology.

The longer hospitalization found in our study compared to previous studies (median: seven vs four to five days)29,38,39 probably reflects the more complex medical history of our patient population14,24. It may also be attributed to the higher rates of gram-negative microorganisms and their high resistance rates that necessitated prolonged use of intravenous antibiotics14. Mortality in our study was higher compared to other studies24,29,38,39, and the non-survivors were older, with a higher comorbidity rate, more severe infection upon presentation, and higher frequency of a skin lesion predisposing to an SSTI. Importantly, SSTIs in non-survivors implicated more gram-negative bacteria, with a notable rate of antimicrobial resistance. These findings are supported by other studies in the literature that also show a worse prognosis of SSTIs due to gram-negative bacteria, especially in the presence of antimicrobial resistance16,40. To that direction, implementation of a local protocol concerning antibiotic administration based on local antimicrobial resistance rates can reduce the consequences of inappropriate antibiotic use, such as antimicrobial resistance, thus reducing the possibility of selecting inappropriate empiric therapy in patients with SSTIs or other infections16.

Our study has several limitations that we acknowledge. Firstly, its retrospective design may have led to an underestimation of the precise number of SSTIs. Furthermore, despite the fact that our institution is a referral center for South Greece, post-discharge visits to other healthcare institutions may have been missed, and therefore the readmission rate may have been underestimated. As far as the microbiology of SSTIs, the limited number of isolated pathogens does not allow for accurate comparisons between survivors and non-survivors. Additionally, our patient population mainly consists of elderly individuals with a high comorbidity rate and rates of previous hospitalization and antibiotic exposure. This could have contributed to the different microbiology of the SSTIs, thus, making the extrapolation of our results for the general population difficult. Finally, even though we only included patients with a clinical diagnosis of SSTI, some isolates may have been colonizers and not true pathogens. Nevertheless, compatibility with a clinical syndrome and the fact that the vast majority were gram-negative bacteria, which are not common skin colonizers, significantly eliminates this possibility.

In conclusion, the present study provides a comprehensive description of patients admitted with SSTI and denotes the importance of gram-negative bacteria as emerging causative agents affecting mortality. In addition, the observed high resistance rates support that SSTI treatment should be based on antimicrobial treatment protocols, derived from local epidemiology. Future studies should focus on risk factors and outcomes of SSTIs by gram-negative bacteria.

Part of this study was presented as a poster at the 27th European Congress of Clinical Microbiology and Infectious Diseases (ECCMID) in April 2017 in Vienna, Austria (Poster number P0724).