Background: Cytochrome P450 2C9 (CYP2C9) gene polymorphisms alters the required warfarin dose in patients, due to pharmacogenetic events. This study aimed to identify the frequency of the allele CYP2C9 polymorphic variants *2 and *3, and the association of these allelic variants with warfarin dosage in the population of the west Azerbaijan province in Iran.

Methods: One hundred and seventy patients receiving warfarin were examined to evaluate the genotype frequency of common CYP2C9 polymorphisms. Genotype analysis for CYP2C9*2 and CYP2C9*3 polymorphisms was performed by polymerase chain reaction-restriction fragment length polymorphism (PCR-RFLP) assay. To assess if the dosage is different between genotypes we used one-way analysis of variance (ANOVA).

Conclusions: Due to the relatively high frequency of CYP2C9 polymorphisms in the study population, the clinicians should become aware of these results to reduce the risk of hemorrhage when prescribing warfarin. HIPPOKRATIA 2017, 21(2): 93-96.

Warfarin is administered for various therapeutic purposes including prevention of stroke in patients with chronic atrial fibrillation, embolism in patients with rheumatic heart disease, prevention and treatment of venous thrombosis, pulmonary embolism, and transient ischemic attack1. Warfarin dose requirement is estimated by measurements of the prothrombin time (PT) and international normalized ratio (INR) blood tests. Therapy usually starts with a fixed dose of warfarin, followed by regular measurements of the coagulation rate. The weekly dose for each patient is adjusted to ensure that the patient’s INR is in targeted range2.

Despite the effectiveness of warfarin in treated patients, it may be associated with toxic effects in some, especially in the initial stage of its administration3. Clinical potency and safety of warfarin depend on maintaining a therapeutic INR range and this is achieved by personalizing the drug dose for each patient4. If the drug level in the blood is lower than targeted, therapeutic goals are not achieved, and there is a risk of blood clot formation while if it is too high, there is an increased potential risk of bleeding. This is particularly important due to the wide variation among individuals regarding their response to warfarin doses5. Genotyping of the single nucleotide polymorphisms (SNPs) in genes regulating warfarin metabolism or its target enzymes could enable doctors to prescribe each patient with the appropriate therapeutic dose of warfarin6. The CYP2C9 gene is responsible for catalyzing warfarin metabolism5, and several common variant alleles have been reported for it, but of these allelic variants CYP2C9*2 (rs 1799853, c. 430 C>T, p. Arg144Cys) and CYP2C9*3 (rs 1057910, c. 1075 A>C, p. Ile359Leu), are the most common functionally significant coding SNPs that affect enzyme activities and cause impaired metabolic capacity of the CYP2C9 enzyme by amino acid substitution. Patients with one or two of these variants require a lower dose of warfarin and encounter a higher risk of bleeding compared with patients carrying the wild-type (*1) allele7.

In the present study, we assessed the alleles and genotypes of CYP2C9 and established minor allele frequencies in the heart valve replacement cohort of the west Azerbaijan province in Iran. We also tested how polymorphic variants within CYP2C9 could affect the required dose of warfarin.

In this prospective study conducted between February 2016 and March 2017, 170 consecutive heart valve replacement patients, from Seyyedal shohada Hospital in Urmia, Northwest of Iran who required warfarin therapy were enrolled and had their INR checked. The targeted INR range for the studied cohort was calculated at 2.5-3.5. Their mean daily warfarin dose was 4.23 ± 2.43 (range 0.28-12.10 mg). Patient characteristics are presented in Table 1. The study was approved by the Scientific and Ethical Committee of Urmia University of Medical Sciences (Ir.umsu.rec. 1394.282 /05.02.2016).

Genotyping for the CYP2C9*2 and CYP2C9*3 polymorphisms was performed with polymerase chain reaction-restriction fragment length polymorphism (PCR-RFLP) assay using the primers (5’-GGATATGAAGCAGTGAAGGAA-3’ and 5’-GGCCTTGGTTTTTCTCAACTC-3) to amplify a 420-bp CYP2C9*2 amplicons and (5’-TGCACGAGGTCCAGAGATGC-3’ and 5’- AAACATGGAGTTGCAGTGTA-3’) to amplify a 131-bp CYP2C9*3 amplicons. The PCR reactions were performed as described by Daly et al in 20068. Ten microliters of PCR products were incubated with one unit of the restriction endonuclease AvaII and NsiI (New England Biolabs, Ipswich, MA, USA) restriction enzymes for CYP2C9*2 and *3 respectively at 37 °C overnight. The digestion products were analyzed on 2 % agarose gel. For CYP2C9*2 a 420 bp DNA fragment was amplified by PCR. After RFLP analysis, the presence of the mutant allele T was indicated by loss of the single AvaII site and a single band at 420 bp while products containing C allele were digested to two fragments of 363 bp and 57 bp (Figure 1). For CYP2C9*3 a 131 bp DNA fragment was amplified. The presence of the CYP2C9*3 allele was indicated by the loss of the single NsiI site created by the PCR primer. So amplified products containing mutant allele C were visualized as 131 bp bands, whereas those containing the wild allele T produced bands of 110 bp and 21 bp (Figure 2).

Statistical analysis was performed using the IBM SPSS Statistics (IBM SPSS, IBM Corp., Armonk, NY, USA), version 23.0. The significant differences in the daily maintenance dose of warfarin between the different genotype groups were evaluated by ANOVA and Tukey post-hoc test. Box plot analysis was performed to graphically display the dispersion and skewness of genotyping data. The statistical level of significance was set at p =0.05.

Comparison of warfarin daily maintenance dose between genotype groups showed that the daily mean dose of warfarin in patients who have homozygous wild-type genotype for CYP2C9 (*1/*1)was5.26 ± 2.32 mg, which was significantly higher than that in *1/*2, *1/*3 (3.57 ± 2.25 mg, p <0.001) and *2/*2, *2/*3, and *3/*3 patients (3.76 ± 2.4 mg, p =0.024). The mean daily warfarin dose in the subjects with wild-type CYP2C9*1 was significantly higher. However, there was no statistically significant difference in the mean daily warfarin dose between heterozygotes and homozygous mutants. Distributions of the dose within the different genotypes are illustrated in Figure 3. 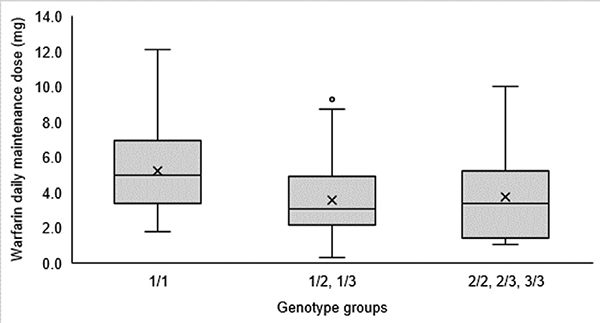 Figure 3: Boxplot showing the different genotype groups of CYP2C9 against the daily warfarin dosage. Boxes indicate the median and interquartile ranges. Vertical lines above and below boxes indicate the minimum and maximum values. The numbers above whiskers show mean values. An asterisk shows each outlier.

Warfarin is an anticoagulant drug metabolized by CYP2C9 and its dose requirement varies between individuals. Optimizing the appropriate dose of warfarin for each treated individual would lead to a reduced incidence of side effects and in turn decreased healthcare costs for patients and hospitals9. The variability in the individual response to the prescribed daily dose of warfarin is mainly associated with polymorphisms in two genes, CYP2C9 and VKORC1, besides demographic factors such as age and body-surface area10. In patients with CYP2C9*2 and CYP2C9*3 alleles the half-life of the more bioactive S-warfarin is increased, so the required dose is lower, the probability of bleeding is higher and the time to reach a steady-state may be longer compared with those who carry the wild-type genotype11.

Different allelic frequencies have been reported for CYP2C9*2 and CYP2C9*3 in different racial groups. In the multi-ethnic population of Iran, genetic diversity and different allelic and genotypic prevalence are possible. It is essential to investigate the distribution patterns of genetic variants in different regions of the country to reach a proper dosing algorithm of warfarin and a better understanding of the relationship between CYP2C9 variants and sensitivity to warfarin. In our study, the majority of patients had allele *1 of CYP2C9, with a frequency of 62.2 %, and the variant alleles 2 and 3 with 12 % and 25.8 % frequencies respectively. The allelic frequencies of CYP2C9*2 and CYP2C9*3 were compared to those reported in various populations (Iranian, Turkish, Indian, Chinese, Malaysian, and European). For example, in the northeast of Iran, the frequency of CYP2C9*2 and CYP2C9*3 variants (9.1 % and 10 %, respectively)12 was lower compared with our studied population. The region of our studied population is located in the northwest of Iran near to the border with Turkey where the population is comprised of mostly Turkish ethnicities. So we compared our results with those in Turkey and observed similarity to those reported by Yildirim et al (17 % for *2 and 26 % for *3)13 and Ozer et al (13 % for *2 and 15 % for *3)14 in a Turkish population. However, the frequencies of CYP2C9*2 and CYP2C9*3 in our study were different compared with Gujarati Indians (4.90 % and 3.92 %)15, Chinese (2.6 % and 4.6 %)16, and Europeans (12.5 % and 8.5 %)17.

We also evaluated the effect of CYP2C9 polymorphisms as a genetic determinant of the daily warfarin dose. Our study showed that patients carrying mutant allele *2 and *3 for CYP2C9 required a lower dose of warfarin compared with carriers of wild allele *1. Patients with homozygous wild-type *1/*1 genotype required a significantly higher dose, but there was no statistically significant difference between the heterozygous and homozygous mutant patients. The association of CYP2C9 variants with warfarin dose requirement was firstly reported in 199918. To date, a number of studies have confirmed that having at least one of the allelic variants for CYP2C9 is associated with a lower mean dose requirement for warfarin compared to having wild-type alleles19. Clinical trials involving genotype-guided dosing which include genotyping for CYP2C9 have also be conducted. According to the results of a large pharmacogenomics trial, the Clarification of Optimal Anticoagulation through Genetics (COAG) study by Kimmel et al, genotype-guided dosing of warfarin did not improve the anticoagulation control based on the time within the therapeutic range during the first four weeks of treatment20. However, the European Pharmacogenetics of Anticoagulant Therapy (EU-PACT) warfarin trial, indicated that genotype-based dosing on days 1-5 was superior to standard therapy regarding the time spent within the targeted therapeutic range over three months. With genotype-based dosing, a significant reduction in supratherapeutic INRs was detected indicating both safety and efficacy with such a strategy10. As discussed by Pirmohamed et al, due to use of a maintenance dose algorithm to determine the initial dose in the COAG study, it is unlikely that steady state was achieved in most patients by day four21. While a meta-analysis did not prove the clinical importance of the pharmacogenetic dosing of warfarin on the basis of time within the therapeutic range, evidence of some advantages such as more rapid achievement of stable dosing was obtained22. Recently, another study on genotype-guided dosing was published; the Genetic Informatics Trial (GIFT) study, showing a better outcome for patients with genotype-guided dosing compared to controls dosed with a clinically guided algorithm. Factors studied included INR above four, bleeding, and death. The findings appear to be consistent with the EU-PACT23.

Results of the current study in combination with other reported, suggest that genotype profiling of each patient for CYP2C9 in the initial warfarin dosing phase might play a critical role. However, to have a better insight, one should consider variants of the other genes, namely VKORC1.

The authors are grateful to Professor Ann K. Daly for her helpful comments on the manuscript. This research has been partially supported by the Ministry of Science, Research and Technology of Iran.