The major issue in the care of patients with End-Stage-Renal Failure (ESRF) treated by hemodialysis (HD) is the creation and maintenance of vascular access (VA). Vascular access is associated with surgical, economic and medical problems for the patients, as well as for their providers1. The complications associated with HD, to a great extent are a result of the type of vascular access. The Dialysis Outcome Quality Initiative (DOQI) guidelines for VA in HD, recommend the use of arteriovenous fistula (AVF) over a central venous catheter whenever possible2. According to these guidelines, arteriovenous grafts of synthetic or biologic material are acceptable, but not preferred, and long-term central venous catheters should be avoided. AVF has become the gold standard among all the available permanent VA for HD as it is associated with less complications. The guidelines recommend placement of fistula at least six months prior to anticipated start of HD in order to accomplish enough time for its maturation and to avoid eventual placement of central venous catheter. But, as many patients in the majority of countries in the world are not followed by nephrologists prior to starting renal replacement therapy, they are confronted with lack of permanent VA placed timely, before initiating maintenance HD. The incidence of refusal of preemptive AVF is also high in a substantial group of chronic kidney disease patients3.

The aim of our study was to analyze the type of VA in HD patients in the country and to see its association with other variables recorded by the National Renal Registry in 2009 (age, gender, dialysis vintage and mortality)4.

The data collected by the National Renal Registry in 2009 were analyzed. All the prevalent patients from 18 HD centers in 2009 were included in the study, as well as those who died during the year (non-incident patients). A total of 1,457 patients were analyzed. One hundred and ninety one patients were incident, and 164 out of 1,457 died during the year. Except for 9 patients, all the others had data on type of VA, as well as data on any VA intervention performed during the year. The overall mean age was 58.8 ± 13.1 years. Distribution of type of VA was analyzed. Age, mortality, type of VA were compared between incident and non-incident patients. Dialysis vintage was compared among the different type of VA. The number of interventions on VA during the year was analyzed, as well as number of deaths according to type of VA. Descriptive statistics to show distribution of VA was used. Student t-test for unpaired data was used to compare two groups of numeric variables, and ANOVA to compare more than two groups. Chi square test was used to compare two groups of nominative variables.

A total of 153 patients were reported to have central venous catheters (10.6%). The majority of them were temporary (non-tunnelised catheters), but there are no data on the exact percentage. Eighty nine percent of patients on maintenance HD in 2009 had AVF (Figure 1). Figure 2 shows the coverage of different types of central venous catheters, subclavian, femoral, jugular and unknown type. 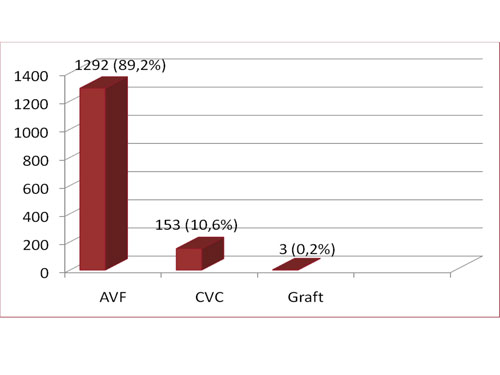 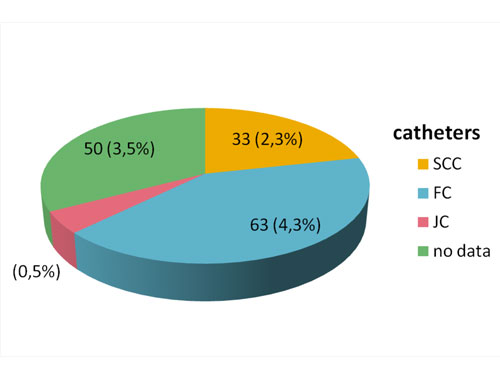 Type of vascular access in maintenance HD patients is of utmost importance as it is associated with numerous complications and patient survival. AVF is superior to arteriovenous prosthetic graft or tunneled central venous catheter, but in spite of different guidelines recommendations in favor of AVF as permanent vascular access in these patients, it is still underrepresented, not only in incident, but also in prevalent patients in many countries in the world. In the USA, the rate of use of AVF in prevalent patients is very small. It has increased remarkably from 32.2% to 55.8% in the period from 2003 to 2010, but is still much lower compared to European countries5. Pisoni et al, compared data for vascular access in HD patients in the period 1996-2000 between USA and European countries. AVF was used by 80% of European and 24% of US prevalent patients, and was significantly associated with younger age, male gender, lower body mass index, non-diabetic status, lack of peripheral vascular disease and no angina6. Similar results showed the DOPPS data from Canada indicating that Canadian chronic HD patients rely far too often on tunneled central venous catheters and are not reaching targets for AVF use, the reason possibly being that guidelines were not adequately disseminated in a way that targets the multiple physicians (family physicians, endocrinologists, cardiologists, internists, paediatricians, urologists, vascular and general surgeons, interventional radiologists and others), administrators and government health care policy makers7. In a recent paper by Krzanowski in Poland 46.5% of incident HD patients have AVF as permanent vascular access, and 84% of them have AVF at the end of the first year on HD8. The data from the Slovenian Renal Registry in 2008 show that VA was provided by a native AVF in 82%, a polytetrafluoroethylene graft in 6%, and a catheter in 12% of patients on HD9. Our data show remarkably high percentage of native AVF in prevalent HD patients (including those who died), more than 89%. Unlike other countries, for example the USA, where women are underrepresented among AVF patients, possibly because of concerns about smaller vascular diameters and higher rates of early primary fistula failure in female HD patients10, our data showed no significant gender differences among AVF patients. There were, also, no gender differences regarding dialysis vintage and mortality.

Data obtained by our national renal registry show high number of prevalent patients with AVF as permanent vascular access. But, incident patients have substantially high percentage of central venous catheters and higher mortality. Therefore, efforts are to be undertaken for placing AVF prior to initiating renal replacement therapy in order to lower the number of complications of central venous catheters in incident HD patients as well as mortality.

Authors disclose no conflict of interest.