Background: Uterine fibroids are the most common reproductive tract tumours in females. Uterine artery embolization (UAE) is a fertility-sparing procedure for treatment of symptomatic fibroids. We evaluated the efficacy and safety of UAE in the treatment of 118 patients with symptomatic uterine fibroids in a single Academic Centre in the West of Ireland to determine whether fibroid and uterine size affect clinical outcomes and complications.
Methods: This was a retrospective cohort of 118 patients who underwent UAE for treatment of symptomatic fibroids between November 2006 and August 2011. Diagnosis of fibroids in symptomatic patients was established by magnetic resonance imaging (MRI) and/or transabdominal ultrasonography (US). Three different embolic agents were used. All patients had at least one follow-up using MRI, at three and/or 12 months. A non-validated questionnaire was used to report patient satisfaction with regards to symptoms improvement on a yes-or-no basis.
Results: Mean fibroid volume, uterine size and dominant fibroid size were significantly reduced at three months and one year follow-up (p = 0.00) and that was tallied with symptoms improvement (p < 0.05). Overall patient satisfaction at three months was 84% falling to 75.9% by 12 months (all p < 0.05). Few complications were reported (2.5%). No significant difference was observed in safety or efficacy for different embolic agents.
Conclusion: The study confirms the safety and efficacy of UAE in the treatment of symptomatic fibroids.

Uterine fibroids are the most common reproductive tract tumour in females showing increasing prevalence with age1. They are incidentally diagnosed during a clinical or ultrasound (US) examination and cause no symptoms. If symptomatic, they commonly cause menorrhagia, dysmenorrhoea and non-bleeding bulk-related symptoms.

Uterine artery embolisation (UAE) has been approved by the National Institute for Clinical Excellence (NICE) for the treatment of uterine fibroids and relieving symptoms2. UAE is a minimally invasive procedure, performed under local anaesthetic and requires an overnight hospital stay. A number of different embolic materials and techniques are available at varying costs, yet the best method of achieving effective embolisation is unclear. Technical failure is uncommon and a repeat procedure is rarely required. Despite unpredictable complications with UAE, the risk of long-term sequelae is low.

In this retrospective study, 118 women underwent UAE for treatment of symptomatic fibroids between November 2006 and August 2011. Institutional ethical approval has been taken for the study from the local ethics committee at University Hospital Galway. All patients were counselled about the risks and benefits of UAE and informed consent was obtained. Patients were all symptomatic and refused hysterectomy when indicated. Exclusion criteria included current pregnancy, endometrial polyps or hyperplasia, pelvic malignancies or infections and presence of any contraindications for angiography. All patients underwent gynaecologic examination, magnetic resonance imaging (MRI) and/or trans-abdominal US (GE 200, GE, USA, Convex probe, 2.5-5 MHz). The fibroid volume was calculated using a prolate ellipse formula (length x depth x width x 0.5233). All patients had at least one follow-up using MRI, at three and/or 12 months. A non-validated questionnaire was used to report patient satisfaction with regards to symptoms improvement on a yes-or-no basis.

The primary outcome was safety based on assessment of peri- and post-operative complications. Complications were graded with respect to severity using the complication classification developed by the Society of Interventional Radiology (SIR)3. General side effects (GSEs) such as post embolisation syndrome (PES) not requiring readmission, natural fibroid expulsion and vaginal discharge were considered a normal consequence of the embolisation process.

The secondary outcome was treatment efficacy including resolution of symptoms and patient-reported satisfaction. Other efficacy outcomes included technical success, reduction in fibroid/uterine size (as determined by MRI) and further treatments required for unresolved fibroid symptoms. Efficacy and safety were analysed for associations with fibroid and uterine size and volumes.

Normality tests were carried out to determine data distribution for age and size. Age and weight were transformed into categorical variables by their mean values. Wilkoxon tests for paired samples, Spearman’s correlation and chi-square tests for univariate analysis were used where appropriate. Missing data were excluded in the calculations. Statistical tests were two-tailed with a significance level set at p<0.05 and confidence interval (CI) at 95%. Analyses were performed using Statistical Package for the Social Sciences (SPSS) version 15.0 (SPSS Inc., Chicago, IL, USA).

Baseline demographics and presenting symptoms are shown in Table 1. Three and six patients had previously undergone UAE and myomectomy respectively. One and nine patients had used GnRH analogues and the Mirena coil® respectively.

The majority of the UAEs were technically uneventful (n = 115, 97.4%). Two procedures were difficult (a unilateral instead of standard bilateral UAE and a right femoral artery injury requiring subsequent angioplasty). The majority of subjects had no intraoperative complications (90%). Three out of 118 patients (2.5%) declined PCA, as they were symptoms free. The mean length of stay was 2.38 ± 0.8 days (1-8 days). One hundred five out of 118 (89%) patients were discharged home following their overnight stay. One patient was treated with antibiotics for groin haematoma; another patient was investigated for suspected pulmonary embolus (PE), which was not confirmed. One patient developed an acutely ischaemic limb from a non-specific undetermined reaction. Therefore, complications were reported for three out of 118 patients (2.5%) (SIR Class D). There were no SIR Class E or F complications. No significant difference was observed in safety for different embolic agents (One-way Anova, p = 0.23).

Mean uterine size, fibroid volume and dominant fibroid size was significantly reduced at three months (p = 0.00). These changes were associated with significant symptom improvement, including menorrhagia (58 out of 69, 84%) and bulk related symptoms (62 out of 69, 90%) (all p’s < 0.05). Mean fibroid volume and dominant fibroid size were further reduced after one year (p = 0.00); however mean uterine size increased, although this was still reduced compared to the pre-UAE size (p < 0.05) (Table 2). No fibroid size change was observed in four out of 49 (9.7%) patients. At 12 months, follow-up was available for 62 out of 118 patients and in those menorrhagia was present only in 24.1% (p < 0.05). Volumetric response (VR) (%) appeared to be associated with symptoms improvement at three and 12 months but this was not significant. Improvements in menorrhagia at three and 12 months were unrelated to initial fibroid volume and fibroid size. Little difference, although significant was observed for VR between smokers and non- smokers [Wilkoxon test, 44.5 (95% CI: 36.8-52.09) vs 47 (95% CI: 39-55), p < 0.0001]. Interestingly, despite their initial good response at three months, four women had symptom resolution or fibroid regrowth within one year. One patient had a myomectomy in the interim- and ended up with a hysterectomy within two years from the initial UAE. Two patients, age 43 and 45 had further investigation for infertility and underwent ovulation induction. They achieved assisted conception and they were both delivered by caesarean section.

Our short-to-midterm 12-month follow-up study confirms the safety and efficacy of UAE for the treatment of symptomatic uterine fibroids. Subjects included symptomatic women, less likely to desire fertility but wished to avoid surgery and also poor surgical candidates. They were primarily referred by Gynecologists; an essential collaboration to optimize the safety and efficacy of UAE6. A standardised UAE protocol, pain management and aftercare were available and streamlined by multidisciplinary team. Demographic factors, known to be risk factors for fibroids were recorded from the clinical database, including age, weight, ethnicity, smoking, previous fibroid-related procedures in an attempt to predict adverse effects, however none of those proved significant in the univariate analysis.

As the fibroid size is still a matter of debate, the major finding of this study was that mean fibroid volume was significantly reduced by 42.7% at three months and by further 32.5% at one year follow-up. Mean dominant fibroid size was also reduced by 27% at three months and further 68% at 12 months. Likewise, mean uterine size was reduced by ~20% at three months; however this was increased by 14.5% one year after the procedure although still lower by 7.5% compared to the baseline, probably secondary to the development of adenomyosis (Figure 1). These values were rather higher than those reported in most studies9,10. Because in those studies, the baseline mean values were higher, the percentage changes are consistent with the notion that the rate of reduction is volume-dependent (the larger the initial volume, the greater the percentage reduction after UFE)11. However, we, in agreement with Katsumori et al, did not identify the baseline fibroid diameter as a risk factor for patients undergoing UAE12. Unlike the Katsumori study, baseline size and percent of reduction were significant. 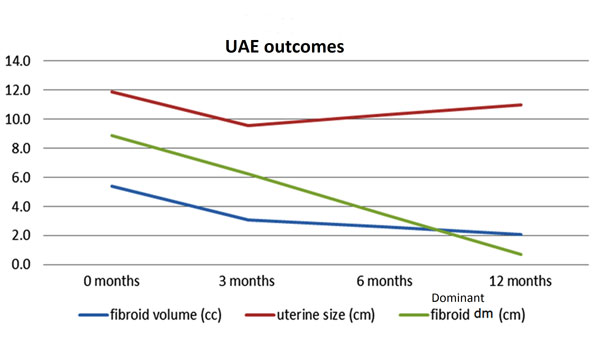 Efficacy was also demonstrated by relief of fibroid-related symptoms, menorrhagia and bulk related symptoms. This compares favorably with the EMMY trial in which the primary endpoint was elimination of menorrhagia in at least 75% of patients13 and the FIBROID Registry14. Likewise, the mean dominant fibroid volume decreased by 30% to to 46% in 2 randomised controlled trials (RCTs) as reviewed by Gupta et al15. However, if the follow up is short, i.e. 6 months, it is likely that positive imaging outcome does not correlate with improvements in symptoms16. Neither the success rate nor the probability of complications was affected by the primary fibroid size, in line with a similar study9.

Embospheres® were predominantly used in this study. Their efficacy and safety has been well demonstrated in a recent study showing improvements of clinical symptoms and quality-of-life (QOL) scores during mid-term follow-up17. Since no statistical difference was observed between Embospheres® and Embozenes®, the best method of achieving effective embolisation could not be answered and future RCTs would be required to determine the optimal materials. Following a case of a severe SRI Class-D complication (limb ischaemia), an external investigation failed to show a causal association with use of nanoparticles or catheter fragments. Reassuringly, a recent meta-analysis indicated that UAE has a significantly lower rate of complications compared to surgery18. However, this comes at the cost of increased risk of reintervention in the future19.

In conclusion, the study confirms the safety and efficacy of UAE in the treatment of symptomatic fibroids. Patient satisfaction rates were compared to those reported in similar studies16,20 suggesting that patients were well informed about the UAE protocol including complications. Conclusions regarding which subgroups of women would be most successfully treated by UAE based on fibroid size could not be possible in the absence of long-term clinical outcome data. Introduction of new imaging techniques for better delineation of fibroids21 can help towards optimal selection of patients in the base of volume-shrinkage prediction.

This study was presented as a poster presentation at JOGS Meeting, Dublin, November 2011.