Background: Urate through Nacht Domain, Leucine-Rich Repeat, and pyrin domain-containing protein 3 (NALP3) dependent caspase-1 activation stimulates macrophages to secrete inteleukin-1β (IL-1β). Purinergic receptor P2X7 plays a role in the urate induced NALP3 activation. Urate also enhances adaptive immunity indirectly through its ef-fect on antigen presenting cells. In this study, the direct effect of urate on primary human lymphocytes was evaluated.
Methods: Lymphocytes were cultured with or without monosodium urate crystals in the presence or not of a P2X7 inhibitor. Caspase-1 activity was assessed colorimetrically in cell lysates and IL-1β was measured in supernatants with ELISA. Whole lymphocyte viability and proliferation, as well as T-cell proliferation were assessed by means of 2,3-bis-(2-methoxy-4-nitro-5-sulfophenyl)-2H-tetrazolium-5-carboxanilide (XTT) assay and of flow cytometry respective-ly.
Results: Urate induced caspase-1 activation and IL-1β release by lymphocytes. It also induced proliferation of whole lymphocytes and T-cells as well. P2X7 inhibitor abrogated lymphocyte proliferation.
Conclusions: Urate, a well defined danger signal, stimulates directly human lymphocytes in a P2X7 dependent way. The subsequent IL-1β secretion could enhance inflammation, whereas expansion of lymphocyte clones could facilitate a subsequent adaptive immune response.

Uric acid is the end product of purine metabolism in humans and higher primates. Uric acid is currently under intense investigation by the immunologists since it acts as a danger associated molecular pattern (DAMP)1-3. Monosodium urate (MSU) crystals, the etiological agent of gout, are recognized by the Nacht Domain, Leucine-Rich Repeat, and pyrin domain-containing protein 3 (NALP3) in macrophages leading to inflammasome formation. Once inflammasome is formed, caspase-1 is activated and converts pro-interleukin-1β (pro-IL-1β) and pro-interleukin-18 (pro-IL-18) to active IL-1β and IL-18 respectively. Then these potent proinflammatory cytokines are secreted4.

The exact mechanism by which NALP3 is activated by MSU crystals in macrophages is not fully understood. Yet, the ability of NALP3 to sense various structurally diverse stimuli led to the hypothesis that it does not recognize each stimulus individually but senses a common downstream event5. According to a suggested mechanism, extracellular ATP binds to the purinergic receptor P2X7 leading to opening of this ATP-gated cation channel that induces potassium efflux and formation of a large pore by the hemichannel protein pannexin6,7. Intracellular potassium depletion is the trigger that activates NALP3, while inhibition of potassium efflux prevents NALP3 dependent caspase-1 activation in response to MSU crystals8,9.

An elegant study showed that released from dying cells uric acid induces inflammation. However, urate is not involved in the immune response to microbial stimuli or sterile irritant particles. These authors, focused on acetaminophen-induced hepatototoxicity, clearly showed that uric acid is an endogenous non redundant danger signal that regulates sterile inflammation in vivo10. Similarly in a bleomycin-induced lung injury model, released from injured cells uric acid constitutes a major DAMP that through NALP3 activation forms the inflammasome and induces IL-1β secretion11. The role of uric acid in inducing sterile inflammation is continuously extended. For example, a recent study showed that uric acid may play a role even in osteoarthritis, which traditionally is considered as a degenerative disease12.

Although uric acid is known to play a significant role in inflammation, less is known about its direct effect on the cells of adaptive immunity. Studies showed that uric acid promotes tumor immune rejection13, enhances T-cell immune response to antigens14 and plays important role in enhanced adaptive immunity by alum adjuvant15. However, these studies focused on the effect of uric acid on dendritic cells and not on its direct effect on lymphocytes. To our knowledge, there is only one study which showed that uric acid induces a subtle increase in the percentage of T-cells that express certain activation markers16. In the present study the direct effect of uric acid on primary human lymphocytes was evaluated.

Twelve healthy volunteers, 8 females and 4 males, from 20 to 47 years old, participated into the study. An informed consent was obtained from each individual and the hospital ethics committee gave its approval to the study protocol.

Isolated lymphocytes were re-suspended in RPMI 1640 supplemented with 5% fetal bovine serum (Sigma-Aldrich) along with antibiotic-antimyotic solution (Sigma-Aldrich). Cells were cultured for 72h with or without uric acid (Sigma-Aldrich) at concentrations of 10 mg/dL or 20mg/dL and in the presence or not of 100nΜ KN-62 (Sigma-Aldrich), which at the given concentration inhibits selectively the purinergic receptor P2X717-19. Interestingly at both of the above concentrations urate was precipitated forming MSU crystals. All cultures were performed at 370C in a humidified atmosphere containing 5% CO2.

Lymphocytes (1 x 106/well) were cultured in flat-bottom 12 well plates for 72 h with or without uric acid at a concentration of 10 mg/dL or 20 mg/dL. IL-1β secreted in the supernatant was measured by means of ELISA (Quantikine Human IL-1β/IL-1F2, R&D Systems, Minneapolis, MN, USA). Caspase-1 enzymatic activity was assessed colorimetrically in lymphocyte protein extract. A kit based on the degradation of a caspase-specific peptide that is conjugated to the color reporter molecule p-nitroaniline (pNA) was used. The cleavage of the peptide by the caspase releases the chromophore pNA (Caspase -1 Colorimetric Assay, R&D Systems). All these experiments were performed in duplicates and the results refer to the mean of the two measurements.

Lymphocytes (3 x 104/well) were cultured in flat-bottom 96 well plates and treated with uric acid in the presence or not of KN-62 for 72h. Viability and proliferation were assessed by measuring colorimetrically the cleavage of the XTT, a yellow tetrazolium salt, to the orange formazan dye via the succinate-tetrazolium reductase system in the mitochondria of metabolically active cells. For this purpose the TACS XTT cell proliferation assay kit (Trevigen, Gaithersburg, MD, USA) was used according to the manufacturer’s instructions. All these experiments were performed in triplicates and the results refer to the mean of the three measurements.

Lymphocytes were stained with carboxyfluorescein succinimidyl ester (CFSE) (CellTrace, Invitrogen, Camarillo, CA, USA). CFSE passively diffuses into cells. It is colorless and nonfluorescent until the acetate groups are cleaved by intracellular esterases to yield highly fluorescent carboxyfluorescein succinimidyl ester. The succinimidyl ester group reacts with intracellular amines, forming fluorescent conjugates that are well retained, distributed equally between daughter cells, and the mean fluorescence halves accordingly. One µL of 5 mM stock solution was diluted in phosphate-buffered saline (PBS) (Sigma-Aldrich) and immediately added to the cultured lymphocytes (1×106 cells) in flat-bottom 12 well plates for 15 min at 37°C. Cells were then washed two times and cultured with or without uric acid at a concentration of 10 mg/dL.

After 72h in culture, lymphocytes were labeled with the phycoerythrin-Cy7 (PC7) conjugated mouse anti-CD3 monoclonal antibody (Beckman Coulter, Inc., Fullerton, CA, USA). Background was excluded with antihuman immunoglobulin IgG1 PC7 conjugated mouse isotypic control (Beckman Coulter). In brief, 100μl of stained with CFSE cultured lymphocytes were aliquoted into each tube. Anti-CD3 was added and incubated for 15 min at room temperature in darkness. Cells were washed with PBS (Sigma-Aldrich), pellet was resuspended with 500 μl PBS (Sigma-Aldrich) and analyzed within 1h in the Beckman Coulter FC500 apparatus.Although CD45 is highly useful for defining cultured blood cells, its utilization was not possible. 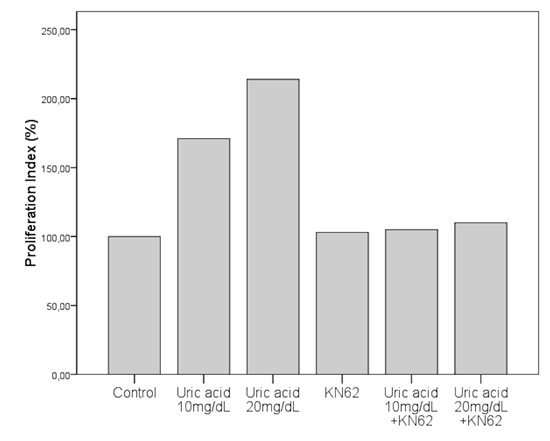 In order to define if uric acid induces T-cell proliferation we performed a CFSE based flow cytometry assay. In the presence of uric acid at a concentration of 10 mg/dL, CD3+ gated T-cells completed their expansion to the second generation, which was not achieved by the untreated CD3+ T-cells. This picture was reproducible in all performed experiments (Figure 3). 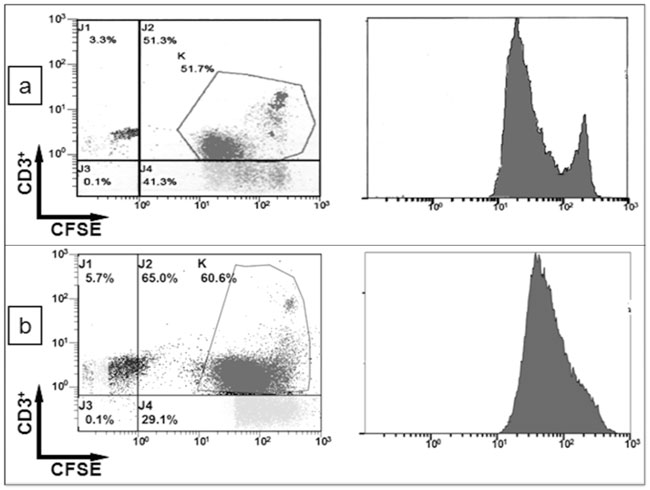 Interestingly at the used concentrations urate was precipitated forming MSU crystals. It has been established previously, albeit in other cell types, that urate in the form of MSU crystals and not in its soluble form enhances inflammatory response20.

IL-1β secretion was measured in the supernatant and caspase-1 activity in cell lysates from lymphocytes treated or not with uric acid. Under uric acid treatment caspase-1 activity and IL-1β secretion were both markedly increased. Because NALP3 is expressed in both human B-cells21 and T-cells22 it is tempting to assume that like in macrophages4, urate acts in lymphocytes through the NALP3 dependent caspase-1 activation pathway. However, this remains to be elucidated further. By the way, the above result per se is intriguing, since it confirms that a DAMP can act directly in lymphocytes, inducing IL-1β secretion and possibly promoting inflammation independently of macrophages.

Another appealing result of the present study is that uric acid induces lymphocyte proliferation in the absence of an antigen receptor specific stimulus. This was confirmed with XTT assay for whole lymphocyte population, and with CFSE flow cytometry assay for T-cells specifically. The fact that the purinergic receptor P2X7 inhibitor KN62 abrogates almost completely uric acid induced lymphocyte proliferation indicates that not only in macrophages6-9 but possibly in lymphocytes too, NALP3 activation is mediated by the opening of this ATP-gated cation channel and the subsequent intracellular potassium depletion. The exact role of NALP3 in lymphocytes remains to be elucidated. The exact mechanism by which uric acid triggers the purinergic receptor P2X7 in lymphocytes remains to be elucidated as well. However, both T-cells and B-cells secrete ATP after various activating stimuli, such as T-cell antigen receptor binding or hypertonic stress in case of T-cells and Staphylococcus aureus Cowan I in case of B-cells. Then the released by viable cells ATP acts in an autocrine manner through the P2X receptors23-26.

A concern about monocyte contamination in lymphocyte cultures is rational, since a small monocyte contamination is inevitable after PBMC depletion of monocytes by adherence. However, the possible monocyte numbers are too small for giving any result in XTT assay (3×104 total cells/well) and caspase-1 assay (1×106 total cells/well) or for explain the IL-β concentrations (1×106 total cells/well). Certainly the results of the above assays correspond to lymphocyte proliferation, caspase-1 activation in lymphocytes and IL-1β production by lymphocytes. In addition to the very small number of monocytes, the fact that urate induces proliferation of T-cells in the absence of any T-cell antigen receptor stimulus excludes any role for this contamination.

An interesting question regarding the uric acid induced lymphocyte proliferation in the absence of antigen receptor triggering is raised from the results of the present study. It is well known that after antigen receptor triggering, activation of three transcription factors is essential for lymphocyte proliferation. These are the nuclear factor of activated T-cells (NFAT), activator protein-1 (AP-1) and the nuclear factor-κB (NF-κB)27,28. However, uric acid may be able to activate these transcription factors in lymphocytes. Uric acid induced IL-1β secretion acting in an autocrine way can bind IL-1β receptor and signal through myeloid differentiation factor 88 (MyD88) activating NF-κB and AP-129,30. Additionally, purinergic receptor P2X7 activation by uric acid could ultimately activate NFAT, since calcium influx through this ATP-gated channel is adequate for NFAT activation in lymphocytes31-33. Uric acid induced antigen receptor independent lymphocyte proliferation could then enhance a forthcoming adaptive immune response simply because of the expansion of lymphocytes clones. Thus, the direct effect of uric acid on lymphocytes may contribute to the attributed to it enhanced adaptive immune response.

In conclusion, urate crystals, a well defined DAMP, stimulate human lymphocytes in a purinergic receptor P2X7 dependent way. The subsequent IL-1β secretion could enhance inflammation, whereas expansion of lymphocyte clones could facilitate a subsequent adaptive immune response. These results support the significant role of urate in shaping adaptive immune response not only indirectly through antigen presenting cells, but also directly through its action on lymphocytes. In the clinical field urate application as an adjuvant in vaccines and the effect of pharmaceutical alteration of its levels on immune related disorders are subjects for further evaluation.