Background: Unicystic ameloblastoma (UA) is a distinct variant of ameloblastoma displaying a large cystic cavity lining by ameloblastomatous epithelium and can present a wide variety of histologic patterns.
Case Report: We herein reported an unusual UA occurring in the mandible of a 23-year-old male patient who exhibited luminal, intraluminal and mural patterns, as well as acanthomatous, basal cells and granular cell variants. In addition, hyaline ring granulomas, an extraordinary finding in ameloblastoma, were found. The nature of several microscopic variants in this tumor and the possible significance of their presence have also been discussed.
Conclusions: We believe this to be the first case reported in which a UA displayed multiplicity of histopathological patterns in a single lesion.

Unicystic ameloblastoma (UA) represents 5-15% of cases of ameloblastoma and it is considered as a less aggressive tumor with a variable recurrence rate1,2. UA is a variant of ameloblastoma that presents three histopathologic subtypes. The luminal variant is a cystic lesion with a flat ameloblastic cystic lining. The intraluminal subtype is characterized by tumor growth into the cyst lumen, while the mural subtype presents infiltrating growth into the wall of the cyst and possibly beyond into the surrounding bone1,2.

This report presents a case of UA with both the intraluminal and mural pattern, and simultaneously displaying several cellular variants, such as acanthomatous, granular and basal cells. These histopathological findings are rarely found together in an ameloblastoma, and we have not found any descriptions with these patterns in UA. Furthermore, this case demonstrated hyaline ring granulomas (HRG), an unusual histopathologic finding in odontogenic lesions, with a controversial aetiopathogenesis.

The patient, a 23-year-old man presented to the oral medicine clinic complaining of a facial asymmetry. The patient reported that it was asymptomatic with two years of evolution. Conventional radiographic images revealed a well demarcated unilocular radiolucent area extending from the second premolar to the mandibular ramus. The lesion involved the impacted lower third molar and caused root resorption in the first mandibular molar (Figure 1A). Based on the clinical and radiographic characteristics, the surgical procedure was marsupialization, followed by enucleation and peripheral ostectomy after two years. The lesion was totally enucleated, including the impacted tooth and erupted first molar and second premolar. 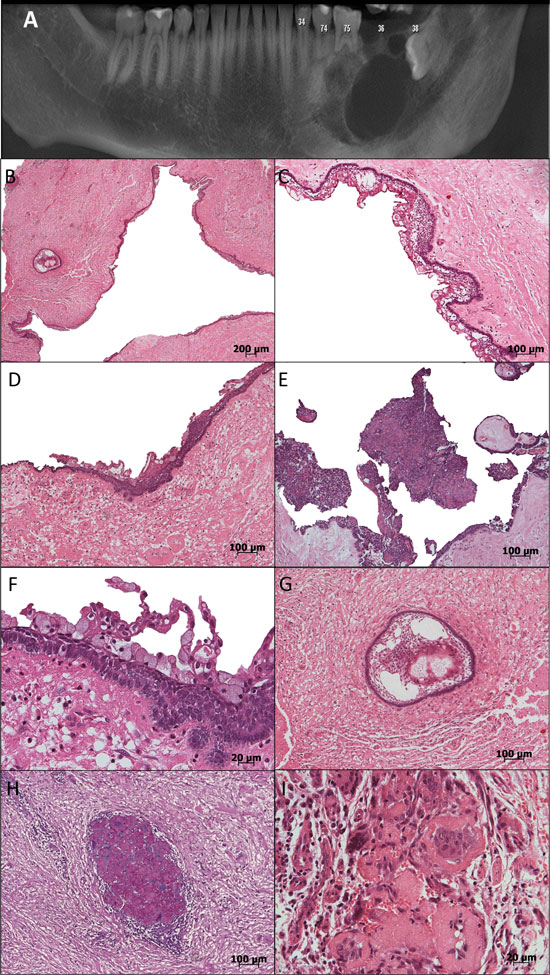 Microscopically, the surgical specimen was characterized by a cystic cavity lined with ameloblastomatous epithelium (Figure 1B-C). The central epithelial cells were loosely arranged, resembling the stellate reticulum of the enamel organ, many of them with squamous metaplasia, resulting in an acanthomatous pattern (figure 1D), or showing granular transformation (Figure 1E). In addition, cells with a baseloid appearance were observed in the epithelial lining (Figure 1F). Various localized nodules of epithelial lining projected into the lumen of the cyst, resulting in intraluminal invasion with baseloid and granular cells. In deeper planes, islands of odontogenic epithelium were noted, usually with ameloblastic and acanthomatous patterns, indicating a mural component with a follicular aspect (Figure 1G). Interestingly, in the fibrous stroma, concentric hyaline material surrounded by multinucleated foreign-body giant cells was observed, compatible with HRG (Figure 1H-I). Therefore the final diagnosis was unicystic ameloblastoma with intraluminal and mural patterns. Thus, a long-term follow-up was established.

There are descriptions of several histopathologic patterns of ameloblastoma: such as plexiform, follicular, acanthomatous, granular cell, basal cell, and desmoplastic type3, however these microscopic findings have not been observed simultaneously. In the present case, the histopathology exam showed a UA with an acanthomatous pattern, granular transformation and basaloid cells. The presence of granular and basaloid cells was observed either in the cyst lining and intraluminal projections, while acanthomatous pattern was found both in the capsule and in the cyst lining.

The acanthomatous variant has been considered a squamous metaplasia often associated with the follicular and granular cell variants of ameloblastoma4, and may be attributed to chronic irritation5. Singh et al6 suggest that the acanthomatous type is locally aggressive and frequently invades the alveolar bone or recurs after marginal surgical excision.

According Nasu et al7 the granular appearance of the cells is ascribed to numerous lysosomes, representing an increased cellular component to digest unwanted components. Although considered the most aggressive variant of ameloblastoma8,9, the granular cells would only be a transitional or matured phase in the ameloblastoma life-cycle, starting with normal stellate reticulum-like cells leading to the production of granules and finally leading to degeneration and formation of cystic areas. Thus, the belief that the granular cell pattern is the most aggressive variant of ameloblastoma is not accepted by some researchers4. Moreover, the positive immunostaining for CD68 and S100, and negative for pancytokeratin supports the macrophage lineage of granular cells10.

In ameloblastomas, basaloid cells tend to be of the low columnar to cuboidal type, and often without reverse nuclear polarity and subnuclear vacuole formation, however the hyperchromatism and palisading of nuclei are maintained. Basal cell ameloblastoma presenting in the manner of an individual entity tends to grow in the form islands of uniform baseloid cells in a mature fibrous connective tissue stroma, showing a remarkable resemblance to the basal cell carcinoma. The similarity in the histopathology of this tumor to basal cell carcinoma might point toward the aggressiveness of this lesion. This histologic variant is the least common type of ameloblastoma and only few cases have been found11.

Other interesting microscopic features observed here were the hyaline ring granulomas, an unusual histopathologic finding. These granulomas are observed in the oral cavity, lung, intestine, skin, gallbladder and uterine tubes, characterized by the presence of foreign-body giant cells associated with hyaline rings lying within a chronically, and less often, acutely inflamed fibrous tissue stroma12. Their presence in inflammatory odontogenic cysts is rare, and when found, they occur mainly in radicular cysts13. We know of only one case report showing HRGs with few multinucleated giant cells surrounding them in a solid/multicystic ameloblastoma, which was associated with vegetable matter14. Our case would be the first report in a UA with simultaneous presence of the three histopathological patterns. The etiology has been related to a foreign-body granulomatous reaction to implanted vegetable particles more specifically those of pulses/legumes12-14; animal experiments have shown evidence of this concept12. Another theory explains that the rings are due to hyaline degenerative changes in blood vessel walls 15. The exogenous origin of these lesions is based on the suggestion of food particles becoming implanted through extraction sockets, deep periodontal pockets and unfilled root canals12,13,16. We are inclined to believe that the initial surgical procedure of marsupialization performed in this case report could have created a pathway of entry for vegetable matter, possibly food particles, supporting the concept of exogenous origin of oral HRGs.

To the best of our knowledge, this is the only unicystic ameloblastoma ever reported, which has shown multiplicity of histopathological patterns in a single lesion, an unusual and extremely rare microscopic finding.

Authors declare no financial interest and no other conflict of interest.

The authors would like to thank Dr. Rodrigo Queiróz Aleixo for help with clinical contributions to this case report.