Background: Unilateral pulmonary artery agenesis (UPAA) is a rare congenital anomaly due to a malformation of the sixth aortic arch of the affected side during embryogenesis. The diagnosis is usually set at adolescence, however it can remain asymptomatic and late diagnosis is possible.
Description: We present a case series of three female patients, aged 18, 49 and 68 years old, with history of recurrent respiratory tract infections, to whom the diagnosis of UPAA was set. They were admitted, due to hemoptysis and productive cough (case 1) or progressive dyspnea on exertion (cases 2 and 3). Chest X-ray was abnormal in all three cases, depicting shift of the mediastinal structures to the left and hypoplasia of the left lung while chest CT demonstrated absence of the left pulmonary artery.
Conclusion: UPAA can remain asymptomatic and diagnosis in adult age is possible, usually after an abnormal chest radiograph. A number of additional imaging techniques are available to aid the diagnosis. Physicians should consider the possibility of undiagnosed UPAA in adults.

Unilateral pulmonary artery agenesis (UPAA) is a rare congenital anomaly, due to a malformation of the sixth aortic arch of the affected side during embryogenesis1,2. It can occur as a single disorder or may be associated with other congenital cardiovascular malformations3. The diagnosis is usually set at adolescence3, however UPAA can remain asymptomatic and late diagnosis is possible, usually after an abnormal chest radiograph4. Herein, we describe a case series of three adult patients with UPAA.

An 18 year-old female was transferred to our clinic from a regional hospital, where she was admitted because of productive cough and hemoptysis. She received antibiotic treatment (azithromycin) without improvement. The patient was a non-smoker with a history of recurrent lower respiratory tract infections since childhood. Lung auscultation revealed decreased respiratory sounds on the left hemithorax, while the rest clinical examination and laboratory tests were normal. A mild hypoxemia was observed. Chest X-ray demonstrated shift of the mediastinal structures to the left with volume loss of the left lung, absence of the pulmonary artery shadow and hyperlucency of the right lung. Pulmonary function tests showed a restrictive pattern while carbon monoxide diffusion capacity, even slightly reduced, was within normal range (84% of predicted). In the six minute walking test (6MWT), desaturation and reduction in covered distance was observed (86% of predicted distance). Chest CT showed left mediastinal shift, interruption of the left pulmonary artery at approximately 2 cm after the outset from the main pulmonary artery and development of collateral circulation, and a hypoplastic left lung with diffuse bronchiectatic lesions. Lung ventilation/perfusion scan revealed absence of the left lung in both phases, while the right lung appeared normal. In cardiac ultrasonography there was no evidence of cardiac malformations or signs of pulmonary hypertension (PH). Bronchoscopy showed signs of chronic bronchitis at the left bronchial tree. Pulmonary angiography revealed absence of the left pulmonary artery with development of collateral circulation with a normal right arterial tree. 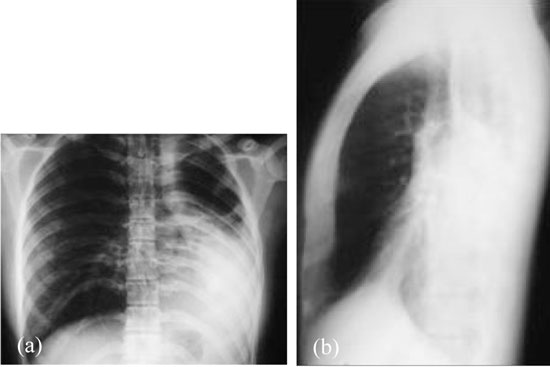 Figure 1: Case-1: Posteroanterior (a) and lateral chest x-ray (b) with complete opacity of the left lower lobe and displacement of the heart and mediastinum to the left. 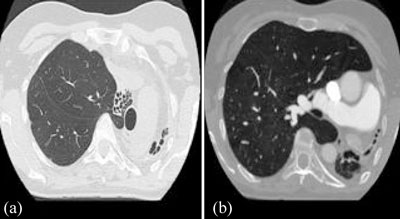 A 49 year-old female was admitted due to progressive dyspnea on exertion and recurrent lower respiratory tract infections. She had a history of arterial hypertension and reported recurrent lower respiratory tract infections since childhood. The patient was a non smoker without a history of exposure to noxious environmental or occupational factors. Lung auscultation revealed diminished respiratory sounds on the left hemithorax. An accentuation of the second heart sound was noted on heart auscultation, while the rest clinical examination and routine blood test exams were normal. Analysis of arterial blood gases showed mild hypoxemia. Pulmonary function tests revealed a restrictive pattern with relative reduction of carbon monoxide diffusion capacity (80% of predicted). In 6MWT, oxygen desaturation and a reduced distance covered (83% of predicted) were revealed. Chest X-ray demonstrated shift of the mediastinal structures to the left, absence of the left pulmonary artery shadow, left hypoplastic lung and a hyperlucent right lung. A chest CT with 3D reconstruction was performed showing interruption of the left pulmonary artery within 2 cm after the outset from the main pulmonary artery with marked collateral circulation, left lung hypoplasia with diffuse bronchiectatic lesions. Cardiac ultrasonography presented right ventricular dilatation with a dilated right pulmonary artery and no signs of PH or cardiac malformations. Ventilation/perfusion scan showed absence of left lung in both phases and a normal right lung. Bronchoscopy revealed signs of chronic bronchitis with excessive mucosal vascularization on the left bronchial tree. Pulmonary angiography was suggested, but the patient did not consent to it. 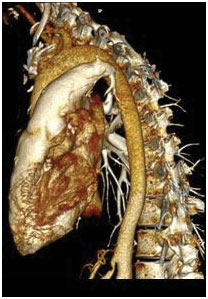 A 68 year-old female was admitted because of progressively deteriorating exertional dyspnea. She had a history of arterial hypertension, diabetes mellitus and recurrent lower respiratory tract infections. The patient was a non-smoker with no history of exposure to noxious environmental or occupational factors. Clinical examination revealed reduced pulmonary sounds on the left hemithorax and an accentuated second heart sound. Routine laboratory tests were normal. Arterial blood gases analysis showed hypoxemia at rest. Pulmonary function tests revealed a mixed restrictive and obstructive pattern with reduced carbon monoxide diffusion capacity (76% of predicted). In 6MWT, oxygen desaturation and a decreased covered distance (81% of predicted) were observed. Chest X-ray demonstrated shift of the mediastinal structures to the left, hypoplastic left lung with cystic formations and a hyperlucent right lung. Chest CT showed hypoplastic left lung with sparse cystic bronchiectatic lesions and ipsilateral mediastinal shift, interruption of pulmonary artery within 2 cm after the outset from the main pulmonary artery with collateral circulation development. No signs of PH or malformations were noted on cardiac ultrasonography. Ventilation/perfusion scan demonstrated absence of left lung in both phases and a normal right lung. Bronchoscopy revealed signs of chronic bronchitis associated to excessive mucosal vascularization and inflammatory narrowing of bronchus on the left bronchial tree, while right bronchial tree was normal. Pulmonary angiography was suggested, but the patient also did not consent to it.

Figure 4: Case 1: Ventilation (a) /perfusion (b) scan showing complete absence of the left lung during both phases.

UPAA was first diagnosed in 18685 and since then, 420 cases have been described in the literature6. The estimated prevalence of single UPAA is 1/200,000 patients4, and there is no sex predilection. While median age of diagnosis is 14 years3, in our case series the diagnosis was set in adulthood. Despite the fact that in 2/3 of cases described, the right side is affected3, our line of patients had a left side UPAA.

Patients with UPAA have a normal pulmonary trunk and unilateral absence of a pulmonary artery branch. Intrapulmonary vasculature and the distal portion of the pulmonary trunk may develop normally and receive vascularization from the bronchial vessels7,8, resulting in a small, hypovascular lung at the affected side.

UPAA can be accompanied by other congenital heart abnormalities3,9, but this was not observed in any of our patients. In almost 2% of the cases, the aortic arch is at the same side of the absent pulmonary artery10. Blood in the affected lung is supplied by the bronchial arteries or by abnormal collaterals arising from the bronchial, subclavian, intercostal and sub-diaphragmatic arteries3,10. In approximately 4% of the cases, a communication between coronary and bronchial arteries is present6,11,12.

Symptoms may include dyspnea on exertion, recurrent pulmonary infections, hemoptysis (in 20% of patients), chest pain, or pleural effusion3,4,10. Massive, life-threatening hemoptysis could also occur13,14. PH is observed in 25% of the patients and determines long-term survival3,10.

Findings at the chest X-ray may include cardiac and mediastinal displacement, absence of the pulmonary artery shadow on the affected side, an ipsilateral elevation of the diaphragm and mediastinum shift, a contralateral compensatory hyperinflation of the hemithorax and herniation across the midline4,10,16,17. 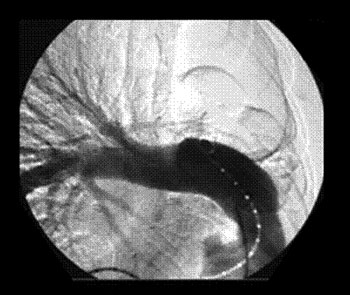 Heart echocardiography, may reveal congenital cardiovascular defects, or PH3,10. Ventilation-perfusion scintigraphy elucidates the anomaly by showing absence of perfusion on the affected side with normal ventilation18, even though cases of reduced uptake has also been described4,19. Contrast enhanced chest CT is adequate for UPAA diagnosis, limiting the use of more invasive techniques20. Parenchymal findings include bronchiectasis and mosaic attenuation pattern in both lungs, possibly caused by an increased perfusion of the unaffected lung, by the development of PH or by a compensatory over-inflation of the unaffected lung21. In addition, chest CT provides useful information regarding PH22 or congenital heart defects23 and perfusion of lung parenchyma24. Chest MRI has also been proven a helpful tool in establishing the diagnosis4,24-26. Pulmonary angiography and digital subtraction angiography are the golden standards in order to establish a definitive diagnosis and identify the collateral blood flow to the affected lung4,10..However, with the development of new non-invasive diagnostic techniques, such as chest CT and MRI, angiography should be used in patients undergoing embolization due to recurrent major hemoptysis27 or revascularization10. On the other hand, angiography and digital subtraction angiography do not provide information regarding pulmonary hemodynamics, and the additional use of right heart catheterization is recommended, particularly in adult patients28. Bronchoscopic findings include signs of chronic bronchitis, mainly in patients with recurrent pulmonary infections, bronchiectatic lesions and vascular changes (plexuses of dilated blood vessels, mesh-like vascularization) that may cause hemoptysis4,17. Cases with a completely normal bronchoscopy have also been described4,29.

Treatment of UPAA comprises surgical, pharmacological and behavioral management. Pneumonectomy and surgical revascularization are considered in cases of recurrent hemoptysis, pulmonary infections and PH3,13,32. Selective embolization of bronchial or non-bronchial systemic arteries is a valid alternative for patients with massive hemoptysis not eligible for surgery14,27. Pharmacological treatment for PH33 is strongly recommended for patients unable to undergo surgical revascularization or in cases not improved after surgery.

In conclusion, UPAA is a rare congenital anomaly usually diagnosed in adolescence, but some patients may remain asymptomatic and therefore undiagnosed until adult age. A number of imaging techniques are available to aid the diagnosis. Physicians should bear in mind the possibility of undiagnosed UPAA in adults.

All authors state that they have not any conflict of interest or financial support.