Background: The investigators hypothesized that degenerative changes accumulate in epithelial cells in the aging rat tongue and that carnitine administration is effective at reversing these alterations.
Material and Methods: To gain insights into the effects of carnitine on epithelial cells of the tongue, the investigators used 15 Wistar rats [3 experimental groups: 5- (A), 12- (B) and 18- (C) month old rats] with 4 rats per group and 1 control group with 1 rat per age group). L-carnitine was administered intraperitoneally to animals of the experimental group for 35 days. Samples of the tongue were processed for electron microscopy.
Results: Degeneration of epithelial cells of the rat tongue was shown to begin early in life (5 months) and alterations were shown to accumulate while aging. L-carnitine administration eliminated degenerative changes when administered in the first age group A, while in the older rats the regeneration was only partial for the epithelium (groups B and C).
Conclusions: The results of this study suggest that profound ultrastructural alterations commence in the degenerating rat tongue and that L-carnitine administration results into partial regeneration of epithelial cells.

Carnitine is an essential nutrient that is present in almost all animal species, microorganisms and plants1. It is involved in many different processes in the human body: energy production, membrane biosynthesis and repair, removal of toxic substrates, anti-apoptotic mechanisms, transport of fatty acids through the internal mitochondrial membrane with concomitant removal of toxic by-products of fatty acids metabolism2,3.

Carnitine levels in the body are the result of exogenous uptake, endogenous synthesis and tubular reabsorption in the kidneys4. Endogenous synthesis is mainly done in the liver, the kidneys and brain from methionine and lysine5. Its concentration is increased in tissues that require high amounts of energy, like muscles and the myocardium6. This justifies the decreased carnitine plasma level, that is 0.6% of the whole body content (21gr)7. Muscle cells are not able to biosynthesize carnitine, thus exogenous carnitine is essential for muscle metabolism8.

The reduction of ischemia-induced myocardial injury after L-carnitine administration provided scientific evidence of the effectiveness of carnitine administration to patients suffering from cardiovascular disease9. Reports on the protective or regenerative effect of carnitine on striated muscle cells are sparse. Similarly, little is known about the protective role against epithelial cell degeneration. However, a few studies report on a protective effect against vascular atherosclerosis and endothelial cell dysfunction10.

The scope of this study is two-fold: 1) to investigate degenerative changes in the epithelium of the aging rat tongue, and 2) to test the hypothesis that L-carnitine attenuates epithelial cell degeneration.

The study was approved by the Bioethics Committee of the Medical School of the Aristotle University of Thessaloniki. Fifteen Wistar rats, 5-, 12- and 18- month old, weighing approximately 500 mg, were used in the experiment. Rats were housed in stainless steel cages, with a maximum of two rats per cage, 12h light-dark cycle, relative humidity and temperature control. They were fed normal diet, 21% proteins, 6.2% fatty acids, 4.5% fibres, vitamins, minerals and anorganic compounds.

The animals were divided into three groups according to age (Table 1).

L-carnitine (Carnitor, Sigma-Tau, Maryland, USA) was administered at a dose of 300mg/kg b.w./day intraperitoneally for 35 days. After euthanasia, samples of the tongue were obtained both from experimental and control groups and the tissues were processed for electron microscopy.

Tongue tissue samples were sectioned into <1 cm3 pieces. They were placed into glutaraldehyde 2.5% for 2 hours and then into osmium te­traoxide 1% for 1 hour. Staining was performed with uranyl acetate 1% (16 hours) and dehydration with advanc­ing ethanol concentrations. Samples were embedded into Epon resin.

Ultra-thin sections (600–900 Å) were taken and stained with Reynolds’s stain. Samples were observed under a JEOL transmission electron microscope.

Point 1 was answered with normal or abnormal, points 3, 4, 5 and 6 with yes or no. Regarding point 2, it was assessed whether there is preservation of interepithelial junctions, moderate destruction or interepithelial edema. 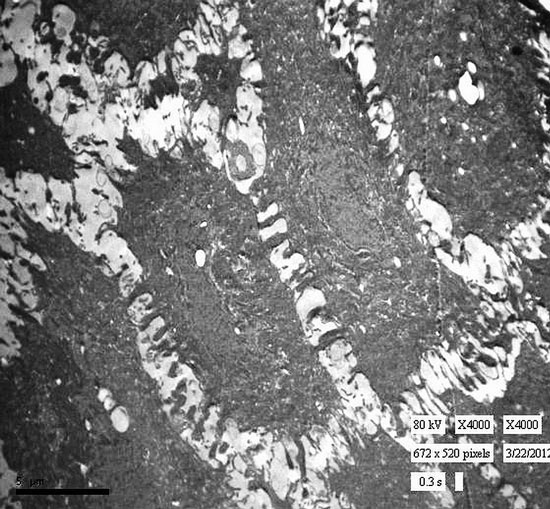 Figure 1: Electron Microscopy image showing moderate destruction of interepithelial junctions in the rat tongue, in 5-month old rats (Group A), that did not receive L-carnitine. 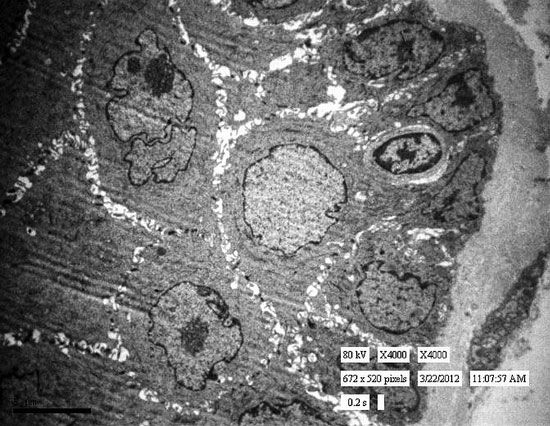 Figure 2: Electron Microscopy image that reveals regeneration of interepithelial junctions in the rat tongue, in 5-month old rats (Group A), that received L-carnitine.

Controls from Group B (B-NLC) revealed destruction of interepithelial junctions, interepithelial edema and profound degeneration (Figure 3). In this age group, alterations of the nuclear morphology of the epithelial cells provided evidence of the gradual accumulation of atypical cells during aging (Figure 4). Carnitine administration resulted in partial regeneration in samples of experimental group B (B-LC). Moderate mitochondrial degeneration and an overall maintenance of the interepithelial junctions were present (Figures 5, 6). Partial mitochondrial cristae preservation was also counted as no cristae preservation. 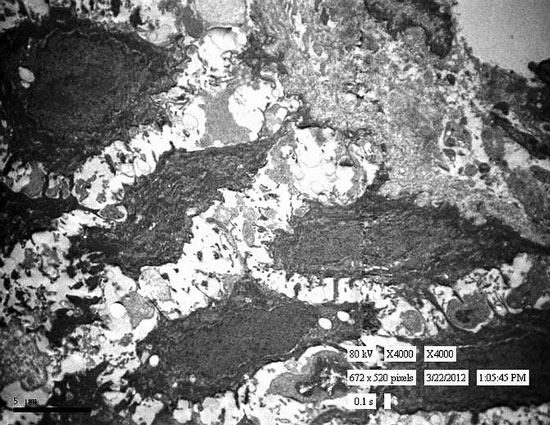 Figure 3: Electron Microscopy image showing interepithelial edema in the rat tongue, in 12-month old rats (Group B) that did not receive L-carnitine. 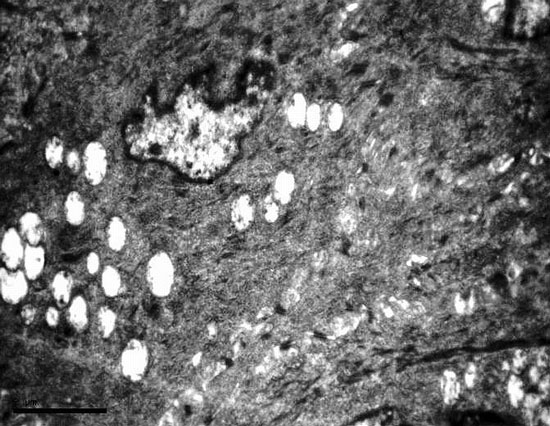 Figure 4: Electron Microscopy image showing atypical nuclear morphology of epithelial cells in the rat tongue, in 12- month old rats (Group B) that did not receive L-carnitine. 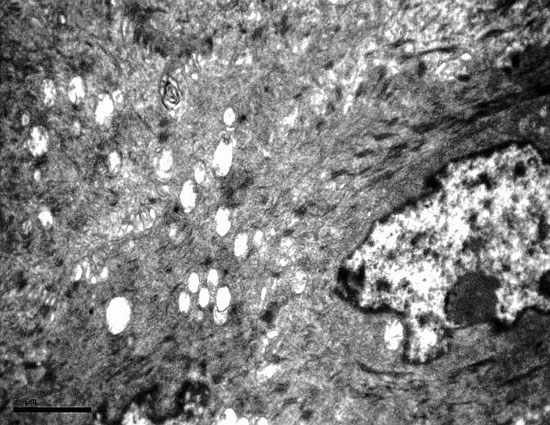 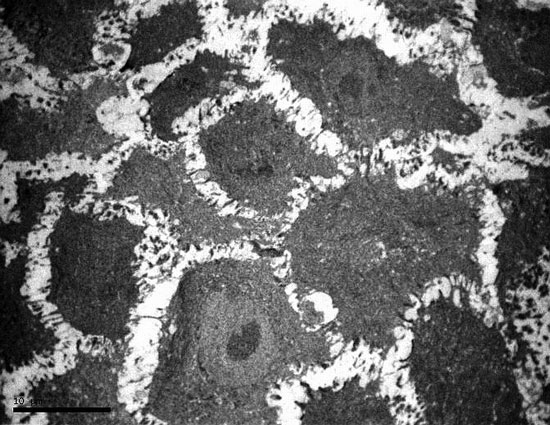 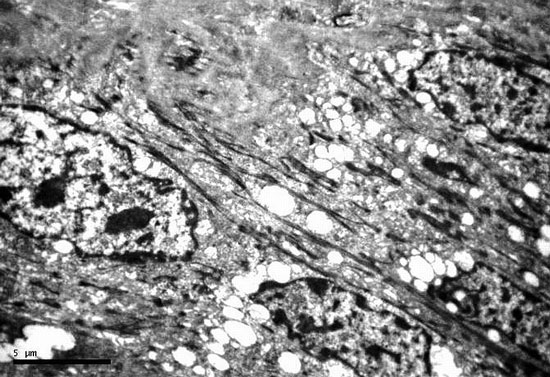 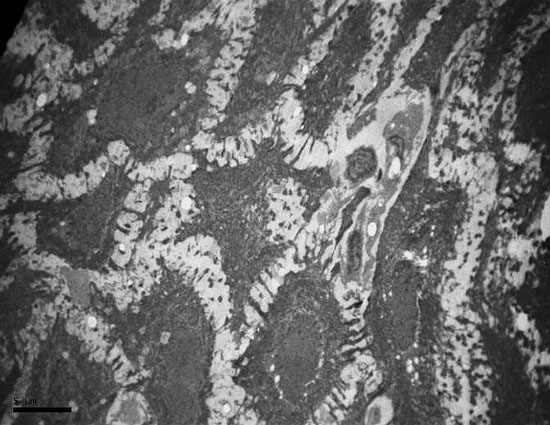 Original studies that investigate the effects of L-carnitine on epithelial cells have not been conducted, yet. However, studies exist that report on the effects of L-carnitine on the endothelium. In particular, attention was paid on this action after the first reports on the protective effect of L-carnitine against vascular atherosclerosis and endothelial cell dysfunction10. However, the mechanism remains unclear. Elevated levels of free fatty acids (FFA) that reduce the concentration of the cytoplasmic free coenzyme A and increase the production of arachidonic acid metabolites, have been linked to impaired endothelial function11. This commences 2 to 3 hours after the experimental rise of FFA plasma levels10. L-carnitine administration restores the dysregulation of the endothelium, probably by reducing the FFA plasma levels, that is the result of the improvement of insulin resistance after carnitine administration10,12. Another possible mechanism for the attenuation of endothelial cell dysfunction is related to the enhancement of endothelium-derived NO production, that could explain the partial restoration of the endoneurial blood flow caused by L-carnitine in diabetic rats13. However, there has been a lot of controversy regarding this issue, in view of the divergent results on the relationship between carnitine deficiency and glycose intolerance14.

Protective effects of L-carnitine on renal epithelial cells were reported by Ozsoy et al15. They found only moderate damage to the renal epithelium in rats receiving a combination of lead acetate and L-carnitine, in contrast to those that were given only lead acetate15. Similar protective effects were detected in the germinal epithelium of the seminiferous tubules in rat testes, after treatment with etoposide16. This may be an important therapeutic approach in order to preserve fertility.

Degenerative changes in the aging rat tongue have not been presented in the literature, yet. Our study reveals for the first time the gradual accumulation of degenerative changes in the epithelial cells of rat tongue. 5-month old rats, already showed signs of degeneration, mostly moderate destruction of interepithelial junctions and lipid droplets formation. Carnitine administration achieved complete remission of these alterations. The other two age groups (12- and 18- month old rats), revealed profound degeneration in the control group, in particular interepithelial edema, lipid droplets formation, atypical nuclear morphology, mitochondrial swelling and no cristae preservation were present. Carnitine resulted into partial regeneration and samples showed moderate degeneration mainly characterized by partial cristae preservation, lipid droplets formation and moderate interepithelial junction destruction. However, in the experimental Group C, sections from animal Nr. 9 did not show signs of regeneration.

The first studies that investigated the effects of carnitine on cell degeneration aimed at investigating possible protective effects on the cardiac muscle. L-propionylcarnitine was reported to restore contraction of myocardial muscle cells and of cardiac output after ischemia in dog myocardium17. A very important effect of carnitine administration on the heart muscle is in case of congestive heart failure (CHF), where attenuation of myocyte apoptosis, caused by the reduction of proapoptotic caspases and TNF-a commences18.

The protective effect of carnitine on the cardiovascular system is multidimensional and involves: anti-oxidative and anti-inflammatory actions, through the release of NO by endothelial cells19, decrease in the concentration of FFAs, because of the enhancement of metabolism10 and vasodilatory effects as a result of the synthesis of either prostaglandins or arachidonic acid20,21.

It is still unclear, whether carnitine possesses anti-atherosclerotic properties. In a previous study, we showed that carnitine did not alter CD4 (used as a marker of early atherosclerotic changes) staining in intimal lesions in aged rats after carnitine administration22.

Only a few reports exist that investigate the effects on other striated muscles. Carnitine administration was reported to result into enhancement of mitochondrial enzymatic activity in muscle cells, restoration of L-carnitine levels and reduction of abdominal fat mass23,24.

The discovery of the reduction of muscle strength in postmenopausal women gave rise to investigations on the possible protective role of carnitine on muscles. In animal models of menopause, carnitine was proven to lessen the degeneration of the quadriceps femoris muscle25.

Our study provides for the first time- to our knowledge- evidence of the protective effect of L-carnitine against epithelial cell degeneration in the aging rat tongue. Limitations as well as possible flaws in the design that must be taken into account include: 1) the intraperitoneal administration of L-carnitine, that may achieve concentrations that are not equal to those after oral administration, 2) the small number of animals used in the study, 3) the assessment of mitochondrial degeneration only by investigating changes in morphology using electron microscopy and not according to mitochondrial enzyme activities that could be investigated with functional assays, 4) the preparation of the samples for electron microscopy could have caused morphological and dimensional changes to mitochondria that could have been attributed to degenerative changes, 5) differences between animals and humans regarding mitochondrial degeneration and activity may not enable extrapolation of the results to humans, 6) the extrapolation of the results of a small tongue section to the whole tongue may be prone to errors.

To conclude, our findings reveal for the first time the profound degeneration of the epithelial cells of the tongue during aging. This process starts early in life and lesions accumulate while aging. L-carnitine administration was shown to completely eliminate the degenerative changes when administered to young rats, while in the older rats regeneration was only partial for epithelial cells.