Background/Aim: The present study describes two unusual and large bony processes which were found at the acromial end of a dried human clavicle, due to their rarity and impressive appearance.
Description of the case: At the anterior border of right dried clavicle we noticed a quadrilateral process having an articular surface at its free end, which probably articulated with the humeral head. At the posterior part of the clavicle inferior surface there was a large conoid process, which replaced the conoid tubercle. The conoid process did not appear any articular surface at its free end to be considered as a coracoclavicular joint.
Conclusion: Although the conoid process of the clavicle may be congenital and usually articulates with the coracoid process of the scapula, in our case the conoid process was acquired and presented a rough and slightly sharp tip, without any joint surface. It was very interesting that the quadrilateral process found at the anterior border of the same clavicle was probably forming an accessory joint between the clavicle and the humeral head.

The clavicle is divided into the sternal or medial end, the shaft or body and the acromial or lateral end. The acromial end presents a small, flattened, oval surface directed obliquely downward, which articulates with the acromion of the scapula. The circumference of the articular facet is rough, especially above, for the attachment of the acromioclavicular ligaments1. The acromial end of the clavicle typically presents three bony protrusions, the deltoid tubercle, the trapezoid line and the conoid tubercle2. The corresponding anatomic variations, which are described in the literature for the acromial end of the clavicle include the existence of trapezoid tubercle instead of line and conoid process instead of tubercle3,4.

Purpose of the current study was to present two unusual and large bony processes at the acromial end of a dried clavicle.

The acromial end of a right dried clavicle, which belonged to a 75-year-old male, presented two large bony processes (Figure 1). Namely, a quadrilateral process, 1.53 cm long, was originated from the anterior border of the bone and directed anteriorly and inferiorly. The wide free end of the process presented a smooth surface, which seemed to be an articular surface. At the posterior part of the clavicle inferior surface there was a large conical process, which replaced the conoid tubercle. The length of the conoid process was measured 1.8 cm and there was no articular surface at its free end, which appeared rough and slightly sharp. The contralateral clavicle had no anatomical variations. No data from the medical record of the 75-year-old male were available. 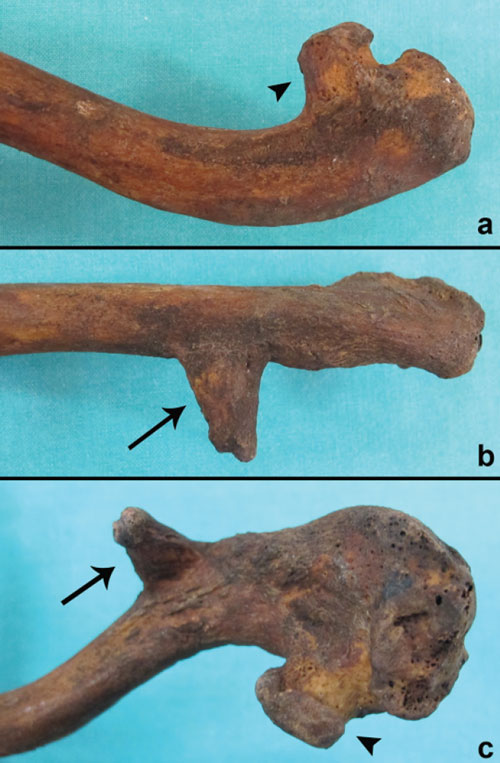 The conoid tubercle of the clavicle may be more prominent and appear as a process. In such cases the conoid process may have an articular surface at its wide free end, which is articulated with a corresponding articular surface located on the superior surface of the horizontal part of the coracoid process. This accessory joint is called coracoclavicular joint and it may also include an articular disc5. Family studies have shown an autosomal dominant pattern of inheritance6, while sporadic mutations may also appear7. According to Mann and Hunt the incidence of this anatomical variation is 1-1.2%5, but Cockshott carried out a geographic analysis of the coracoclavicular joint and reported a high frequency, up to 40.7%, in China and diminishing frequencies across the rest of the world as the distance from China increases7.In two studies from Southern Europe the frequency of that joint was 0.3% and 2.8%8,9.

Olivier found a coracoclavicular joint in 19 out of the 177 dried clavicles that were examined10. However, he stated that the joint was definitely present only in 4 out of the 19 clavicles, since only a cadaveric study can confirm whether a conoid process articulates with the coracoid process or not. In the present study, although the conoid process was found in a dried clavicle as well, there was no doubt about the absence of any articular surface due to the rough and slightly sharp appearance of the process free end. It seems more reasonable to consider that the process in our case was acquired, formed as a result of ossification of the conoid ligament. Indeed, two cases of conoid ligament ossification have been described in the literature, as a consequence of a previous acromioclavicular joint injury11. Unfortunately, we had no data about any previous shoulder injury of the individual that the dried clavicle belonged to. Moreover, we checked the ipsilateral coracoid process for any signs of an accessory joint, but nothing was found.

The quadrilateral process that was found on the anterior border of the clavicle was quite strange for two reasons; first, the site of origin was located well lateral to the common site of the deltoid tubercle, and two, the presence of an articular surface at its wide free end. The theory of a possible acromioclavicular injury, which was considered previously for the enlogation of the conoid process, may also be a reasonable explanation for the formation of the anterior quadrilateral process as well. In terms of location and direction, the articular surface of the process was most probably forming an accessory joint between the clavicle and the humeral head. We checked both the ipsilateral humeral head and acromion for any signs of an accessory joint, but we did not encounter any relative finding. However, the quadrilateral process was directed towards the normal articular surface of the humeral head. The accessory joint could be called “humeroclavicular joint”.

The present study described two unusual and large bony processes at the acromial end of a dried clavicle, due to their rarity and impressive appearance. Although a large conoid process of the clavicle usually articulates with the coracoid process of the scapula, in our finding the conoid process presented a rouph and slightly sharp tip, without any joint surface. On the other hand, it was interesting that the quadrilateral process found at the anterior border of the same clavicle was probably forming an accessory joint between the clavicle and the humeral head.