Background. Paroxysmal nocturnal haemoglobinuria (PNH) is a rare acquired clonal disorder of hematopoietic stem cells involving all blood cells. Erythrocytes have increased susceptibility to complement-mediated haemolysis. Thrombosis is the leading cause of mortality and follows episodes of acute hemolysis. Eculizumab, a monoclonal antibody blocking activation of complement C5 is currently used in the treatment of PNH. Recent results demonstrated that eculizumab effectively reduces thrombosis.
Description of case. We present a 30-year-old male patient admitted with abdominal and lumbar pain. Thorough investigation revealed severe hemolytic anemia requiring transfusions and hepatosplenomegaly. Imaging findings were compatible with a Budd-Chiari syndrome. Flow cytometry confirmed the PNH diagnosis. Due to refractory ascites he underwent a transjugular intrahepatic portal-systemic shunt (TIPS) and eculizumab administration was started.
Results. He has already completed three years of eculizumab treatment and he is transfusion independent. There is also a significant reduction in fatigue with improvement in his quality of life. Doppler scans of his TIPS persistently show it to be patent.
Conclusions. Classical PNH patients with thrombosis and severe intravascular hemolysis are particularly challenging to manage. For these patients, eculizumab is a reasonable therapeutic option, expecting that by decreasing the risk for thrombosis, life expectancy may be increased.

Paroxysmal nocturnal haemoglobinuria (PNH) is a rare acquired clonal disorder of hematopoietic stem cells, related to a somatic mutation in the PIG-A gene that involves all blood cells. Erythrocytes have increased susceptibility to terminal complement-mediated haemolysis. PNH is characterized by intravascular haemolysis, thromboembolic episodes and variable degrees of bone marrow failure1. Thromboembolism (TE) is a serious and life-threatening complication which occurs in approximately one-third of PNH patients1-3. Thecumulative incidence of this complication was nearly 37% inclassical PNH, 10 years after diagnosis3. An initial TE increases the relative risk of death 5- to 10-fold and represents the single most frequent cause of mortality in PNH patients.Sites affected are manifold and often at atypical localization. They most commonly involve abdominal veins such as hepatic, splenic, mesenteric veins, portal and inferior vena cava, and cerebral veins1,2,4.

Eculizumab, a humanized monoclonal antibody that blocks activation of terminal complement C5 components is currently used in the treatment of PNH patients. Treatment with eculizumab reduces transfusion requirements, ameliorates anemia and markedly improves quality of life by resolving the constitutional symptoms associated with chronic intravascular hemolysis9,10. Thrombosis in PNH frequently follows episodes of acute hemolysis suggesting that inadequate complement inhibition or hemolysis might be an important underlying factor contributing to the thrombophilia seen in these patients. Recent results from the International Trial using eculizumab demonstrated that inhibition of complement activation and intravascular hemolysis effectively reduces thrombosis in these patients. Considering that thrombosis has been demonstrated to cause the majority of deaths in PNH, it is reasonable to expect that eculizumab treatment may increase the life expectancy, by decreasing the risk of thrombosis11.

Aim of this study is the presentation of eculizumab treatment in a patient with classical PNH and Budd-Chiari syndrome.

Antithrombotic therapy with LMWH was administered, followed by anticoagulation with acenocoumarol. The patient’s clinical condition progressively deteriorated the months following PNH diagnosis. He developed worsening of anaemia, jaundice, fatigue and severe ascites. He underwent new MRI-MRA that depicted further increase in liver and caudate lobe size, stenosis of inferior vena cava and hepatic veins, dilated portal, splenic and mesenteric veins, splenomegaly and severe ascites (Figure 1). Signs of new thromboses were not found. The patient was confronted with supportive treatment and frequent large-volume paracentesis. Antithrombotic therapy was continued. Despite treatment, patient deteriorated due to refractory ascites and frequent hemolytic crises requiring symptomatic treatment with transfusions and corticosteroids. Finally, one and a half year after PNH diagnosisheunderwentorthotopic liver pre-transplantation evaluation and placement of a TIPS (Transjugular Intrahepatic Portal-Systemic Shunt)13.At the same time, patient was vaccinatedagainstmeningococcal infection and two weeks later eculizumab was started by IV infusion, 600 mg every 7 days for the first 4 weeks, followed by 900 mg for the fifth dose, 7 days later and 900 mg every 14 days thereafter. He has already completed three years of treatment with eculizumab. This resulted in a dramatic reduction of hemolysis markers, as documented by a sharp drop in LDH levels and significant hemoglobin increase (Figure 2). He is independent from transfusions and corticosteroids. There is also a significant reduction in PNH symptoms, such as fatigue, resulting in a significant improvement in his quality of life. His latest LDH is normal, Hb 12.5 g/dl, Ht 37.0%. His liver tests and renal function are within normal limits. Ultrasound Doppler scans of his TIPS performed every six months, persistently show it to be patent, without any evidence of thrombosis. MRI depicted absence of ascites. 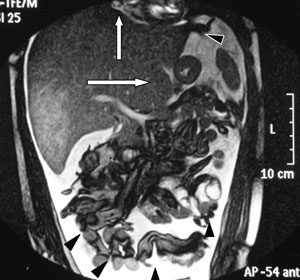 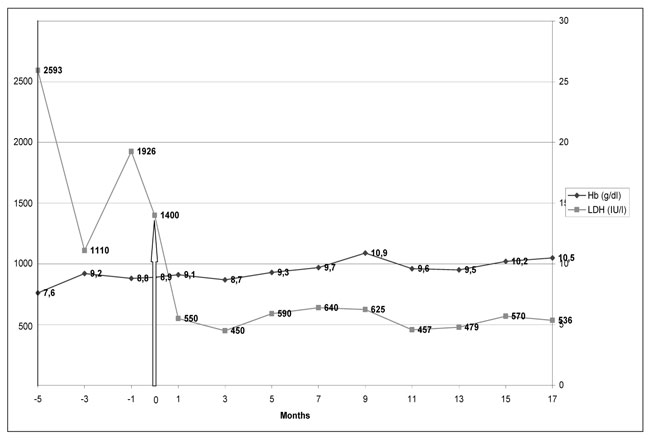 PNH is a rare, serious disease affecting an estimated 8,000 to 10,000 people in North America and Europe1.Median age of diagnosis is early 30’s2,14. It is a chronic and life threatening disorder. Thrombosis is the leading cause of mortality inthese patients. Median survival is 10-15 years following initial diagnosis1,14.

Age at presentation of the Budd-Chiari syndrome is usually the third or fourth decade of life. PNH is frequently affecting young individuals of the same age and thrombosis, which occurs in 40% of them with haemolytic disease1,4 shows a predilection for the intra-abdominal veins, especially the hepatic, suggesting that the majority of patients in whom the aetiology of the Budd-Chiari syndrome is not apparent, may have an undiagnosed PNH. It is likely that many PNH cases still remain undiagnosed worldwide. Patients with Budd-Chiari syndrome in whom after thorough clinical and laboratory investigation no other etiological factor is identified, should be tested for PNH with high sensitivityflow cytometry, as well.

Allogeneic hematopoietic stem cell transplantation (HSCT) was considered as a potentially curable treatment option in our patient. At the same time, eculizumab had received marketing approval from the U.S. Food and Drug Administration (FDA) for PNH, so we could have access to this therapy. Eculizumab has proven to be a safe and effective therapy for PNH in three multi-national clinical studies, TRIUMPH, a placebo-controlled, 26 weeks, Phase 3 study, involving 87 PNH patients10, SHEPHERD, an open-label 52 week Phase 3 trial involving 97 PNH patients19 and E05-001, a long term extension study11.

Conclusively, classical PNH patients with thrombosis and severe intravascular hemolysis are particularly challenging to manage. For these patients, eculizumab is a reasonable therapeutic option, expecting that by decreasing the risk for thrombosis, life expectancy may be increased.