Background: Thyroid transcription factor-1 (TTF-1) has been considered a sensitive marker for thyroid and lung tumors. Recent data have shown that a wide range of neoplasms may express TTF-1.

Case series: We performed an immunohistochemical study in a case series of 42 urothelial carcinomas (UCs) on tissue microarrays sections, in order to investigate how often UCs express the TTF-1 protein and the diagnostic utility of this marker. In addition, we sought to determine by immunohistochemistry if there is an association between TTF-1 expression and the expression of specific basal-like or luminal markers.Five out of the 42 cases (11.9 %) were positive for TTF-1. Three positive tumors concerned non-invasive papillary UCs. There was no association between TTF-1 expression and tumor grade (χ2, p =0.419), stage (χ2, p =0.550) or cytokeratin 5/6 (χ2, p =0.330), cytokeratin 20 (χ2, p =0.995) and estrogen receptors expression (χ2, p =0.268).

Conclusions: UCs may show TTF-1 expression and pathologists should be aware of this phenomenon in order to avoid misdiagnosis, notably in metastatic disease. HIPPOKRATIA 2017, 21(3): 154-157.

Thyroid transcription factor-1 (TTF-1) is a 38 kDa DNA-binding protein encoding expressed primarily in follicular cells and C-cells of the thyroid gland, Clara cells and pneumocytes type II of the lung and in some brain areas1,2. In the lung, TTF-1 operates as a promoter factor for the transcription of Clara cell secretory protein and surfactant proteins A, B, and C. In the thyroid gland, it acts as an activator of thyroglobulin, thyroperoxidase, and thyrotropin receptor genes1,2.

TTF-1 expression in immunohistochemical studies is widely used as a marker for lung and thyroid gland tumors1,3-5. This is particularly important in the differential diagnosis between primary and secondary (metastatic) lung tumors since the lung is one of the most common sites of metastasis. Although TTF-1 has been considered a sensitive marker for lung tumors, especially for adenocarcinomas and small cell carcinomas, recent data supports that TTF-1 expression can be observed in a wide range of neoplasms1. In the literature, there is little evidence of its expression in urothelial carcinomas (UCs)4,6.

Recently, we have encountered a case of a metastatic UC positive for TTF-1. A 64-year-old man with a previously diagnosed UC of the bladder presented with widespread lung and bone metastases. Palliative treatment included surgical removal of a thoracic wall metastasis and the histologic examination confirmed the presence of a high-grade carcinoma. The clinicopathological correlation was suggestive of metastatic urothelial carcinoma, although the observed TTF-1 immunoreactivity. This case prompted us to further investigate the frequency of TTF-1 positivity in randomly selected primary UC cases, and the possible correlation between this expression and several clinicopathological parameters or immunohistochemical expression of basal and luminal markers.

Formalin-fixed paraffin-embedded tissue samples from 40 patients with primary urothelial carcinomas of the bladder, the ureter, and the renal pelvis were randomly selected. Tissue microarrays (ΤΜΑ) blocks were constructed with a manual arrayer (Model I, Beecher Instruments, Sun Prairie, WI, USA). Each tumor was represented by three tissue cores, 1.5 mm in diameter. One case of an infiltrating urothelial carcinoma, high grade of the bladder has been tested twice, on primary tumor and on a recurrence that presented one year later. Two more cases of urothelial carcinomas were also included in the study and were tested in conventional slides. The first concerned a case of a non-invasive papillary urothelial carcinoma, low grade of the renal pelvis, and the second was the above mentioned metastatic to lung, urothelial carcinoma. Table 1 summarizes the histologic diagnosis, the grade and the location of the tumors included in the study. TMA also contained cores from placenta, tonsil, breast, renal, and colon tissue, as negative control markers, whereas cores from normal thyroid tissue were included to serve as positive control. These tissues helped for orientation during microscopy as well.

The immunohistochemical stains for TTF-1, CK5, CK20 were scored as positive if the neoplastic cells were immunoreacted in a percentage of >5 % of the cells, regardless of the intensity of positivity. TTF-1 expression in the vast majority of the neoplastic cells (≥80 % of the cells), as it is usually observed in lung adenocarcinoma, was characterized as high. ER positivity evaluated according to the established criteria7.

Out of 42 cases of urothelial carcinomas studied, five were positive for TTF-1 (11.9 %) (Table 1). Those five cases concerned two cases of non-invasive papillary urothelial carcinomas, low grade (Figure 1A, B), one case of non-invasive papillary urothelial carcinoma, high grade (Figure 1C), a case of infiltrating urothelial carcinoma, high grade and the metastatic one. Both the specimens from the primary tumor and the recurrence of the infiltrating, high grade, urothelial carcinoma (Figure 1D, E) expressed TTF-1. Of note, the metastatic urothelial carcinoma showed a high TTF-1 expression (positive cells >80 %) (Figure 1F), as usually is observed in lung or thyroid carcinomas. It is mentioned that heterogeneity in the expression between the three cores from the same tumor was observed. Two cases showed very weak immunoreactivity in a few scattered cells (positive cells <5 %) and they were consequently considered negative. There was no statistical association between TTF-1 expression and patients’ gender, tumor size (χ2, p =0.679), grade (χ2, p =0.419), infiltrating (χ2, p =0.845), multifocal status (χ2, p =0.774), and stage (χ2, p =0.550). CK5/6, CK20, and ER were evaluated in cases with adequate material and were found positive in a percentage of 50 % (14/29), 41.9 % (13/31), and 14.3 % (5/34), respectively. No association was found between TTF-1 and CK5/6 (χ2, p =0.330), CK20 (χ2, p =0.995) or ER expression (χ2, p =0.268). However, it is emphasized that these results may be biased due to the small number of cases included in the study. Only one TTF-1 positive tumor was CK5/6 positive. The majority of ER-negative UCs was TTF-1 negative as well. Of note, all ER-positive cases were of high grade. 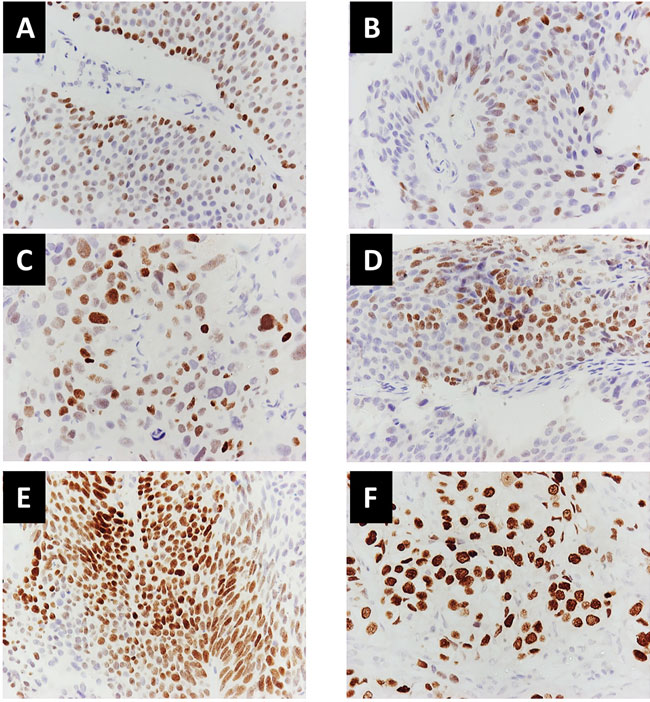 A considerable number of studies have shown that various types of tumors of other sites, besides lung and thyroid gland, also express TTF-14,8-13. To the best of our knowledge, two case series in the English literature have reported in total six cases of infiltrating urothelial carcinomas of the bladder with TTF-1 expression4,6 (Table 2). In the first study, the researchers compared the sensitivity in detecting pulmonary and extrapulmonary tumors of the two most commonly used clones, namely 8G7G3/1 and SPT244. Both clones detected five positive tumors in a total number of 98 cases of infiltrating urothelial carcinomas of the bladder (5.1 %). In the second study, 30 cases of infiltrating urothelial carcinomas of the bladder were tested and only one of them expressed TTF-1 (3.3 %), using 8G7G3/1 clone6 (Table 2). A third study failed to find any TTF-1 positive urothelial carcinoma in a total number of 11 cases, using 8G7G3/1 clone3 (Table 2).Previous studies have reported that the SPT24 clone is more sensitive compared to 8G7G3/1 clone in detecting both extrapulmonary and pulmonary tumors8,10. The only study which compared TTF-1 expression in urothelial carcinomas with both clones, failed to find any difference4 and the authors argued that previously reported differences may be due to technical parameters4.

CK5/6 is considered a protein of squamous and basal cell differentiation. In normal urothelium, CK5-expressing basal cells can differentiate into CK20-expressing superficial umbrella cells14. These markers along with estrogen receptors (ER) were included in previous studies that tried to distinguish basal-like and luminal bladder carcinoma subtypes15. In this study, immunohistochemistry was used to define surrogate molecular subtypes. The TTF-1 expression does not seem to be a characteristic of a particular subtype, emphasizing however that this result may be biased due to the limited number of TTF-1 positive cases.

In conclusion, TTF-1 should not be considered a specific marker for lung and/or thyroid tumors. Although immunostaining against TTF-1 is a useful tool for the distinction between primary and secondary (metastatic) lung tumors, the TTF-1 expression should be interpreted very cautiously, since other malignant tumors (e.g., UC) may express TTF-1 in their primary and metastatic sites. The frequency and the epidemiological, clinical and pathological characteristics of TTF-1 positive urothelial carcinomas need further investigation.