Background: The Hemiconvulsions-Hemiplegia-Epilepsy (HHE) syndrome is currently regarded as an extremely rare condition. The etiological and pathophysiological mechanisms underlying this medical rarity as well as the optimal therapeutic approaches remain poorly defined and understood. We present the clinical, radiological and electroencephalography (EEG) findings of a patient with the HHE syndrome and describe the response of the continuously present epileptiform abnormalities to transcranial magnetic stimulation (TMS).

Case description: A 33-year old male patient was referred to our department for investigation and management of intractable epilepsy. His seizures began at the age of three months when, during the course of a common febrile illness, he developed repetitive clonic seizures involving the left upper and lower limbs, followed by permanent left hemiplegia. After extensive investigations, he was diagnosed with “idiopathic” HHE syndrome. Currently, he suffers from left hemiplegia, severe intellectual impairment [Intelligence Quotient (IQ) <30] and asymmetric, bilateral tonic seizures occurring 1-3 times daily despite treatment with valproate, topiramate, lamotrigine, rufinamide, and perampanel. Brain magnetic resonance imaging revealed atrophy of the right hemisphere and serial EEGs disclosed continuous sharp waves, the generators of which were localized by electrical source imaging (ESI) to two distinct sources within the right hemisphere. Repetitive TMS [210 stimuli of 1 Hz at 100 % corticomotor threshold applied with a circular coil over the generators of epileptic discharges (EDs)] resulted in a statistically significant decrease of ED counts compared to sham stimulation and the post-verum TMS period.

Conclusion: We present the clinical-laboratory profile and the long-term follow up of a patient with the HHE syndrome. Further, we describe the effects of TMS on EDs. The latter observation raises the possibility that TMS-EEG may be used in select cases with intractable epilepsy as a surrogate marker of responsiveness to more invasive modalities (i.e., cortical stimulation). HIPPOKRATIA 2017, 21(2): 101-104.

The Hemiconvulsions-Hemiplegia-Epilepsy (HHE) syndrome is a term coined by Gastaut et al1 in 1957 to describe a dramatic sequence of events comprising prolonged unilateral clonic seizures followed by ipsilateral hemiplegia and focal epilepsy. With the introduction and wider availability of effective agents for the acute treatment of prolonged seizures, HHE has become a nosological rarity. Gastaut, for instance, in 1959 easily gathered 150 cases2, whereas there was only one equivocal patient (0.06 %) reported to the NINDCS Collaborative perinatal project in the USA twenty years later3.

The present submission has a dual objective: First, to present the clinical, radiological, and electroencephalography (EEG) findings of a patient with the HHE syndrome who has been followed-up over an extended period. Second, to explore the response of the continuously present epileptiform abnormalities to repetitive transcranial magnetic stimulation (TMS).

A 33-year old male patient was referred to our department for investigation and management of intractable epilepsy. He was born full term, after an uneventful pregnancy and delivery. His family history is notable for a paternal grandmother who had epilepsy since childhood. He had been well up to the age of three months when, during the course of febrile gastroenteritis, he suffered an episode of prolonged convulsions followed by repetitive clonic seizures involving the left upper and lower limbs. There was no meningismus and he became quickly afebrile (<24 hrs). Nevertheless, left hemisomatic clonic seizures, lasting up to four minutes, continued at a frequency of 5-20/day, despite treatment with clonazepam and phenobarbital. Postictally, paresis of the left upper and lower limbs was noted which over the next two weeks gradually became permanent left spastic hemiplegia.

Repeated cerebrospinal fluid (CSF) examinations had normal findings whereas a computed tomography scan, obtained ten days after the onset of seizures, showed contrast enhancement over extensive areas of the right hemisphere. The rest of the investigations, including CSF cultures and virology, were normal and the patient was diagnosed with “idiopathic” HHE syndrome. After discharge, seizures continued to occur essentially unabated despite treatment with valproate, carbamazepine, phenytoin, and lamotrigine. By the age of five, a gradual change in seizure semiology was noted as intractable tonic seizures replaced the left-sided clonic seizures. Currently, at the age of 33 years old, he suffers from asymmetric, bilateral tonic seizures, lasting up to 30 secs and occurring 1-3 times daily, sometimes leading to falls and precipitating injuries. Postictally an exacerbation of the patient’s left-sided weakness is usually noted for approximately 60 mins. On examination, he shows facial grimacing and has a limping gait and paucity of movements on the left side. He looks quite alert but does not speak or obey commands. There is atrophy of the left upper limb, particularly of the hand, as well as hemiparesis [Medical Research Council (MRC) grade 3 power in upper limb extensors and grade 4 in lower limb flexors], spasticity, increased tendon reflexes with clonus and Babinski sign on the left. A psychometric evaluation revealed severe intellectual impairment [Intelligence Quotient (IQ) <30] with complete absence of language development. The patient is unable to carry out basic every-day living activities and therefore totally dependent on his parents. 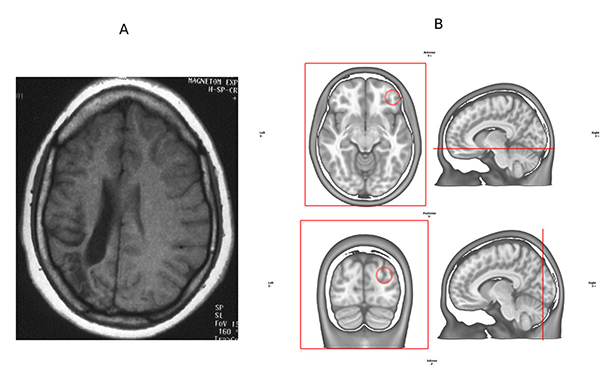 Figure 1: (A) Brain magnetic resonance imaging of the patient in T1SE (TR/TE =570/15 msec) axial sections reveal a right hemisphere of reduced size with dilatation of the ipsilateral ventricular system, gliosis at the posterior parts of the temporal, parietal, and occipital lobes as well as atrophy of the posterior part of the corpus callosum. (B) Electrical source imaging of interictal epileptiform discharges (EDs), with a spherical head model and LORETA and LAURA as inverse techniques, revealed the presence of two distinct sources of epileptiform activity (located in the convexity of the right frontal lobe and the right occipito-parietal area).

The patient is currently treated with valproate 1,500 mg qd (plasma levels: 80 μg/dl), topiramate 400 mg qd, lamotrigine 300 mg qd, rufinamide 1600 mg qd and perampanel 12 mg qd. This combination of drugs reduced seizure frequency by approximately 50 % but did not abolish seizure occurrence. The patient had been previously treated with vagus nerve stimulation which improved the level of alertness but did not have a significant impact on the tonic seizures and the accompanying epileptic falls.

The presence of continuous epileptiform EEG abnormalities provided an opportunity to explore the acute effect of TMS on these discharges. We hypothesized that in case an acute neuromodulatory effect of TMS was detected, the TMS-EEG paradigm might be used as a surrogate marker of responsiveness to invasive brain stimulation methods (for instance, direct cortical stimulation). The patient’s parents provided informed consent for the procedures, which were approved by an institutional review board and performed in accordance with the ethical standards laid down in the 1964 Declaration of Helsinki4. 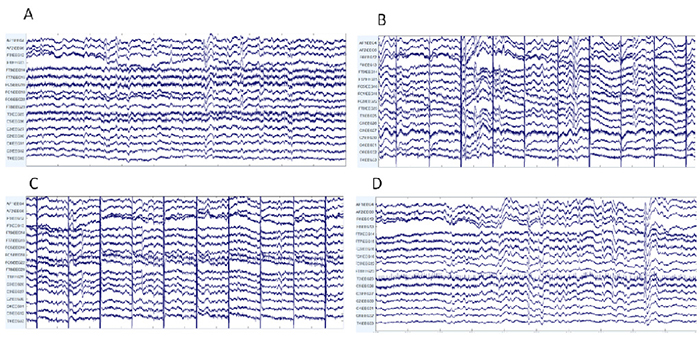 Figure 2: Representative electroencephalography (EEG) excerpts from the four periods of the transcranial magnetic stimulation (TMS)-EEG study: resting (A), sham TMS (B), verum TMS (C), and post-verum TMS (D). For clarity of presentation, a subset of electrodes (n =17) are depicted. Unfiltered signal with negativity plotted as an upward deflection and no TMSartifact replacement.

Brain stimulation was performed with a MagPro X100 stimulator (MagVenture A/S, Farum, Denmark) with the following parameters: (i) Location & Stimulation coil: Stimulation was applied over the area of the irritative zone. Electrical source imaging (ESI) indicated the presence of two distinct sources of epileptiform activity (Figure 1B). Accordingly, a 114-mm circular coil (MC-125) with the rim of the coil overlying the sources of interictal activity was employed. (ii) Stimulus Intensity: Stimulation was applied at 100 % corticomotor threshold (assessed with an adaptive threshold technique). (iii) Stimulation frequency and number of stimuli: Trains of 350 sham stimuli and 210 verum stimuli were sequentially applied at 1 Hz.

EEGs were visually analyzed by two electroencephalographers with an intraobserver agreement of >90 % for spike and sharp wave detection. EEG analysis was performed by comparing spike/sharp wave counts in artifact-free epochs of 10 sec duration in the three main periods (sham TMS, verum TMS, post-TMS).

Repetitive TMS with the parameters as mentioned earlier was well tolerated. The frequency of epileptic discharges (EDs) followed a normal distribution, as shown by the Kolmogorov-Smirnov test (p >0.05). During sham TMS, spikes and sharp waves had a mean frequency of 5.89 ± 2.79 per epoch. During verum TMS, mean frequency was reduced to 2.55 ± 2.65 per epoch, whereas during the post-verum TMS the ED counts increased to baseline levels 4.12 ± 3.34. In Figure 3, the simple regression lines of spike counts versus time in the three TMS-EEG stages are depicted. The comparison of the three regression lines reveals that the differences between the slopes are not significant (p =0.259) whereas the intercepts differ in a statistically significant manner (p =0.013). In particular, the intercept in the sham TMS has significantly higher value compared to verum TMS whereas in the post-verum TMS the intercept increases significantly to baseline levels (Table 1). 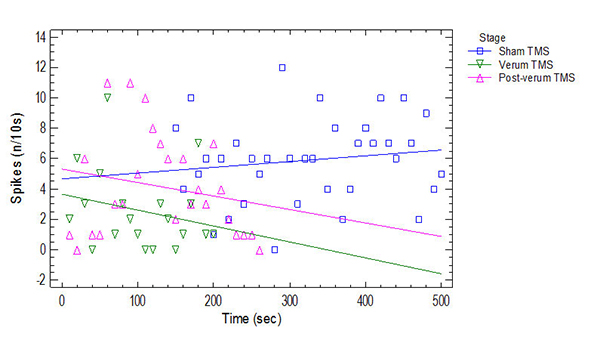 The present case report has a two-fold objective: to describe the clinical, radiological, and neurophysiological profile as well as the long-term evolution of a patient with the HHE syndrome and, additionally, to explore the acute effects of TMS on the continuously present EEG epileptiform activity.

In recent years, the incidence of the HHE syndrome has declined significantly, probably as a result of the widespread availability of benzodiazepines for the emergency treatment of seizures. However, despite its rarity, it is still regarded as a clinically significant entity and has been rightfully included in the latest ILAE classification of seizures and epilepsies5. A number of pathogenetic mechanisms have been put forward to explain the dramatic sequence of events leading to this catastrophic form of epilepsy, including the presence of an underlying brain malformation and cortical dysplasia, the occurrence of venous thrombosis or the activation of the excitotoxicity cascade6. Moreover, recent studies have proposed genetic factors that may be linked to HHE such as chromosome deletions and duplications7-8 and sodium voltage-gated channel (SCN) mutations9. Importantly, acute central nervous system infections are not implicated as a causative factor, as also suggested by the present case.

The observation that low-frequency repetitive TMS significantly reduced the patient’s continuous epileptiform discharges warrants further discussion. In recent years, a small but increasing number of studies suggested that the acute administration of repetitive TMS may result in the abortion of clinical and/or electrographic epileptiform activity10-13 and possibly restore the altered brain connectivity network14. For instance, Rotenberg et al10 in a pioneering study applied repetitive TMS stimuli in patients with epilepsia partialis continua either as high-frequency (20-100 Hz) bursts or as prolonged low-frequency (1 Hz) trains and observed transient clinical and electrophysiological improvement. From a pathophysiological point of view, it is thought that TMS induces transient unresponsiveness in the brain network responsible for the generation of interictal and ictal discharges although the exact mechanisms underlying this phenomenon are still a matter of conjecture. From a clinical point of view, this observation raises the exciting possibility that TMS-EEG paradigms may be used in selected cases with superficially located epileptogenic foci as a surrogate marker of responsiveness to more invasive modalities like cortical stimulation. This possibility warrants further study.

The HHE syndrome is characterized by intractable epilepsy responsive only partially to numerous antiepileptic drugs and vagus nerve stimulation. The described acute neuromodulatory effects of TMS on EDs corroborates the limited existing literature on the abortive effects of TMS on electrographic epileptiform activity and may possibly have clinical implications.

The authors report no relevant conflict of interest and no funding support.