Background: S-adenosyl-L-methionine (SAMe) acts as a methyl donor, with dopamine, norepinephrine, and serotonin elevating properties, with potential antidepressant effects. In this study, we evaluated the efficacy of SAMe-vitamin B complex supplement for improving mild and moderate depressive symptoms.

Subjects and Methods: The study included 60 patients diagnosed with depression, with mild or moderate depressive symptoms, randomly allocated into two groups. The study group was treated with SAMe-vitamin B complex while the control group was administered a placebo, once daily for three months. The severity of depressive symptoms was measured by the Hamilton Depression rating scale (HAMD17). We measured the symptoms’ severity with the Clinical Global Impression-Severity scale (CGI-S), and the improvement or worsening after treatment with the Clinical Global Impression-Improvement scale (CGI-I).

Conclusion: Three months of supplementation with SAMe-vitamin B complex is effective for the treatment of mild to moderate depressive symptoms. HIPPOKRATIA 2017, 21(3): 140-143.

Major depressive episode (MDD) is defined by at least five symptoms one of which must be depressed mood or loss of interest, and other can be significant weight loss or gain, decrease or increase in appetite, psychomotor agitation or retardation, insomnia or hypersomnia, diminished ability to think or concentrate, fatigue or loss of energy, feelings of worthlessness or excessive or inappropriate guilt, recurrent thoughts of death or suicidal ideation, anxiety, and painful physical symptoms1. The overall prevalence of the major depressive disorders in the adult population is estimated to be 6.7 to 6.9 %2,3. In our everyday practice, we very often encounter patients who despite their depressive symptoms refuse to take medications for a variety of reasons. For some, psychiatric medications carry a stigma, or deny to deal with the symptoms on their own or just don’t like to put chemicals into their body. Although indeed, antidepressants are first-line therapy for MDD, about 50 % of the patients discontinue antidepressant therapy prematurely for a number of reasons like side effects, misperceptions concerning the medication, poor instructions, lack of follow-up care, etc4. As opposed to that, mean compliance with nutritional supplements in community setting studies was found to be 80.9 %5.

S-adenosyl-L-methionine (SAMe) stands out among natural remedies in the treatment of MDD6, but the use of SAMe in the treatment of adult patients with depression should be further investigated7. SAMe is in nutraceutical products drug class and has not been evaluated by the Food and Drug Administration (FDA) for safety, effectiveness, or purity. SAMe is a methyl donor, and therefore plays a vital role in many metabolic pathways through the process of transsulfuration and methylation and participates in the synthesis and catabolism of biogenic amines. In transsulfuration, SAMe directly induces the production of glutathione, the body’s most potent antioxidant. In cellular methylation reactions, SAMe acts as a methyl donor, with dopamine, norepinephrine, and serotonin elevating properties, with potential antidepressant effects. SAMe deficiency in the cerebrospinal fluid has been reported in major depression as well as other neuropsychiatric conditions7,8. Some studies showed that vitamin B complex supports the nervous system and has stress relief effect9,10. Vitamin B12 regulates transmethylation reactions for SAM production, and vitamin B6 regulates transsulfuration reactions; thus vitamin B complex can potentially boost the SAMe effect11. Folate, vitamins B9 and B12 also work together to produce natural SAMe in the body, which supports immune function and mood12. There is no evidence on the joint antidepressant effect of SAMe and vitamin B complex, and there are no regulated manufacturing standards set for these compounds. All potential risks and/or advantages of SAMe may not be known. Common reported SAMe side effects are: a headache, dizziness, feeling anxious, vomiting, diarrhea, increased sweating, and insomnia13.

Aim of the current study was to evaluate the efficacy of SAMe-vitamin B complex supplement for improving mild and moderate depressive symptoms.

We included in the study 60 outpatients older than 18 years, diagnosed with depression, with mild or moderate depressive symptoms. Exclusion criteria were a previous allergic reaction to product components at screening, and side effects or non-compliance during the study. Patients were following up in monthly visits for three months. We calculated with a sample size calculator at confidence level 95 % the needed sample as 43 patients, and confidence interval of 1514,15. We were limited by the provided amount of the supplement and placebo. The study was conducted in the Clinic for Mental Disorders “Dr Laza Lazarevic” and the screening period lasted three months starting from May 2016. We recruited consecutive patients who refused to take antidepressant drugs for various reasons. The study was double blinded and the patients were randomly allocated (biased coin randomization) into the study and control groups (n =30 patients each). The study group was treated with SAMe-vitamin B complex while the control group was administered a placebo, once a day (morning dose) for three months. We used the nutraceutical product with trade name Tensilen®, produced and provided by Abela Pharm (Belgrade, Serbia; SAMe is provided by Gnosis S.P.A), which contains 200 mg SAMe + 3 mg vitamin B1 + 3.4 mg vitamin B2 + 25 mg vitamin B3 + 2 mg vitamin B6 + 1 μg vitamin B12. The manufacturer advertises it as mild rapid-acting natural antidepressant containing SAMe and vitamin B complex. It is recommended to use one capsule daily, morning dose, an hour or two hours after a meal. We followed the manufacturer’s recommendation regarding the supplement intake.

Patients were examined for MDD on the screening visit (t0) according to the 10th revision of the International Classification of Diseases (ICD-10) criteria confirmed via the Mini International Neuropsychiatric Interview (MINI) version 5.0.0 diagnostic scale1,16. The severity of depressive symptoms was measured by the Hamilton Depression rating scale (HAMD17) and classified by Zimmerman’s criteria to mild depressive symptoms (HAMD17 score: 8-16) and moderate depressive symptoms (HAMD17 score: 17-23). We used the Clinical Global Impression-Severity scale (CGI-S) for the measurement of symptoms’ severity, and the Clinical Global Impression-Improvement scale (CGI-I) for the assessment of improvement or worsening after treatment relative to the baseline state17-20. Patients’ HAMD17 scores and CGI-S scores were evaluated at t0 and HAMD17, CGI-S, and CGI-I scores after three months (t90) of supplement or placebo treatment.

All patients gave their informed consent prior to enrollment. The study was approved by the Ethical Committee of the Clinic for Mental Disorders “Dr Laza Lazarevic“(IRB00010399; decision No 2494/18-4-2016) and was performed according to the ethical standards of the Helsinki Declaration, and Good Clinical Practice.

All collected data were analyzed using the IBM SPSS Statistics for Windows (IBM SPSS, IBM Corp., Armonk, NY, USA) software, version 22.0. The descriptive statistics are presented as central tendency (means) and variability (standard deviation and variation interval). Means were compared with the independent samples t-test while for testing data of different categories, we used Pearson’s χ2 test and Mann-Whitney test. We used repeated measures analysis of covariance (RM ANCOVA) for the assessment on t0 and t90 between and within the groups. The level of statistical significance was set at p <0.05. 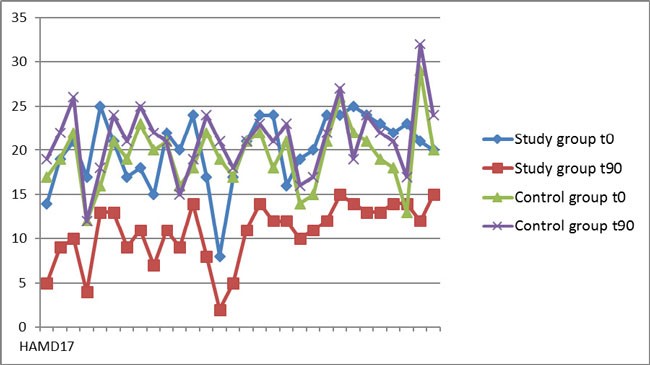 Figure 1: The Hamilton Depression rating scale scores on the screening visit (t0) and after three months (t90) for the study and control groups. 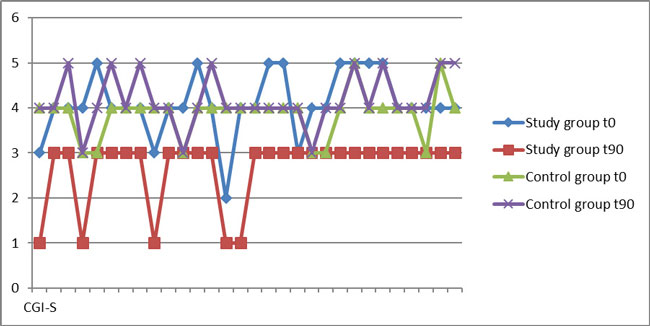 Figure 2: The Clinical Global Impression-Severity scale scores on the screening visit (t0) and after three months (t90) for the study and control groups.

There is a bizarre phenomenon related to antidepressants which is not typical for the other psychotropic drugs. Antidepressants are commonly used in the absence of clear evidence-based indications21. On the other hand, 50 % of the people who are diagnosed with MDD do not take antidepressants as prescribed, or even refuse to take medications for a variety of reasons4. In the latest systematic review on the benefits and harms of complementary and alternative medicine (CAM) for a major depressive disorder, compared to second-generation antidepressants (SGA), authors did not find any difference between the treatment groups regarding response and remission, but with an insufficient strength of evidence for these findings22-24. According to the Cochrane database of systematic reviews, there was no strong evidence of a difference in terms of change in the depressive symptoms from the baseline to the end of treatment between SAMe and placebo as monotherapy (142 participants, two studies)7,25. The current randomized placebo-controlled study that examined the efficacy of innovative SAMe-vitamin B complex supplement for mild and moderate depressive symptoms is a first MDD study with combined nutraceutical products. The main limitation of the study is the relatively small sample due to enrollment solely of patients who refuse to take antidepressants for various reasons. We assumed that recruiting patients who stated that “hate” drugs and “like” supplements for such a study might have compromised the results due to an increase of the placebo effect, but according to the reported results this was not evident. We found a statistically significant difference between the study and control groups in HAMD17 and CGI-S scores after three months, as well as a statistically significant difference within the study group after three months of SAMe-vitamin B complex supplementation. A significant difference was also found in CGI-I scores between the groups, with minimally to much improvement in the study group, and no change or minimally worsening in the control group.

A possible reason why the previous studies were inconclusive in contrast to the reported finding is that they compared the efficacy of the SAMe only. By adding vitamin B complex to SAMe in our study could possibly have potentiated SAMe efficacy and this is the main strength of the current study. Another explanation is that we enrolled only patients with mild or mild to moderate depressive symptoms in whom we anticipated maximum efficiency.

In conclusion, three months supplementation with SAMe-vitamin B complex is effective in the treatment of mild and moderate depressive symptoms, with significant differences compared to the placebo in HAMD17, CGI-S, and with improvement verified with CGI-I scores.

The authors declare no conflict of interest. There was no funding received for any part of the study. The supplement and placebo were provided by Abela Pharm, Belgrade, Serbia.